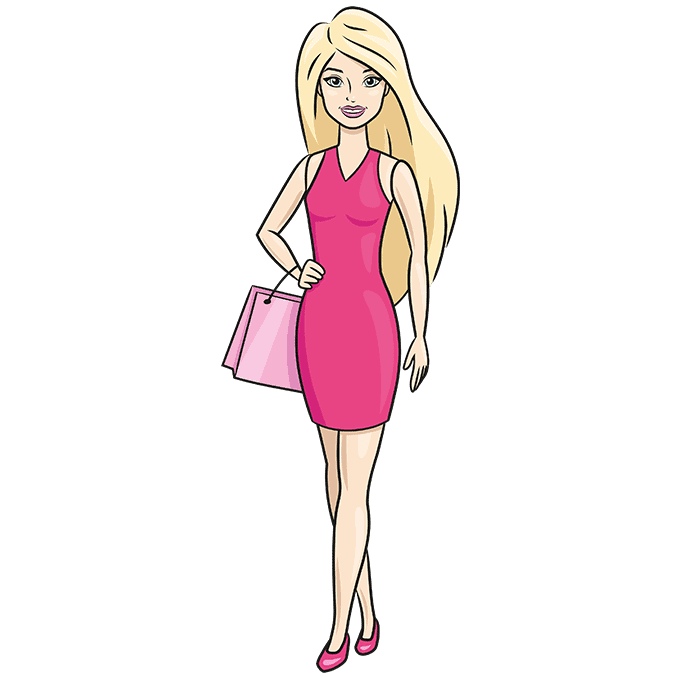 Barbie is an American fashion doll that entered the world scene in 1959. The curvaceous blonde, based on a "risqué gag gift for men," quickly became a cultural icon. In fact, it was featured in the first television commercials directed at children.

In addition to dolls, Barbie has starred in books, movies, and countless items of merchandise. In 1997, Aqua released the song "Barbie Girl." She has appeared in parody and in Disney's Toy Story 2 and Toy Story 3.

Did you know? Barbie's full name is Barbara Millicent Roberts, as revealed in a 1960s novel series. Barbie has had more than 40 pets, including a lion, panda, zebra, and orca. She rides bikes, drives sports cars, jeeps, and jet skis, and pilots airplanes. Her careers have included astronaut, doctor, marine biologist, paleontologist, Olympic athlete, veterinarian, Nascar driver, and chef. Barbie's independence and careers are meant to inspire young girls.

Despite this, Barbie has often been criticized for promoting an unrealistic body image. Modern dolls have a wider waist than older dolls, and new body types including "curvy," "petite," and "tall" have been introduced. Efforts have also been made to include more diversity. The line now features "seven skin tones, twenty-two eye colors, and twenty-four hairstyles."

Would you like to draw a beautiful cartoon Barbie doll? This easy, step-by-step cartoon character drawing tutorial will show you how. All you will need is a pencil, an eraser, a sheet of paper, and crayons or markers to color your drawing.

If you liked this tutorial, see also the following drawing guides: Ballerina, Princess Jasmine from Disney Aladdin, and Princess Zelda. 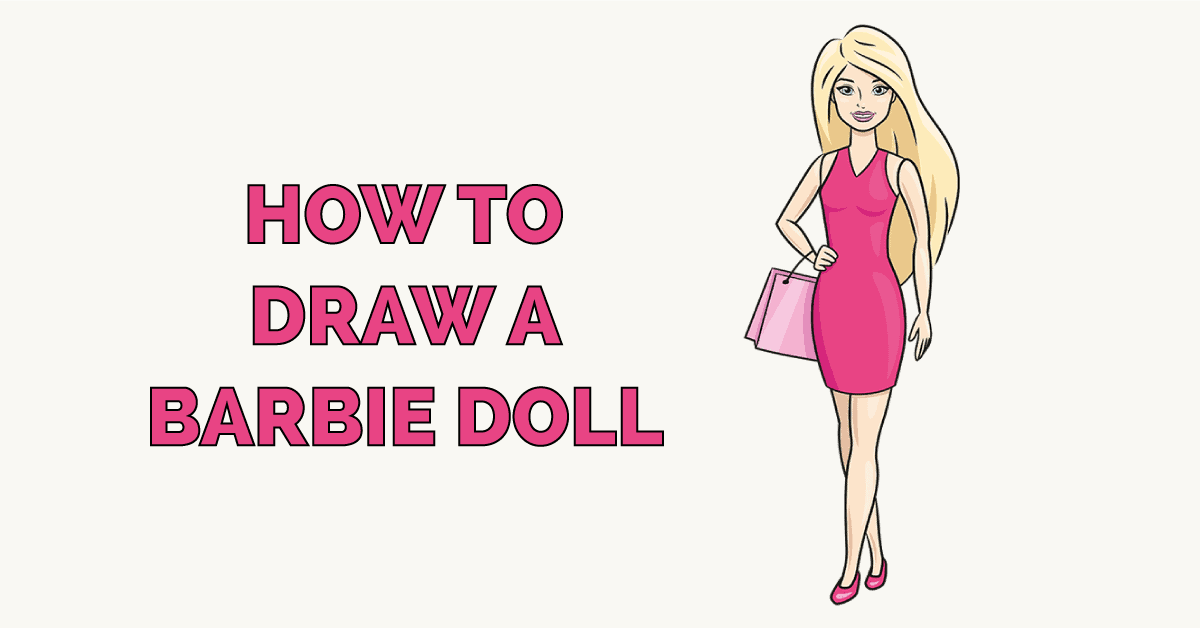 How to Draw a Great Looking Barbie Doll for Kids, Beginners, and Adults - Step 1 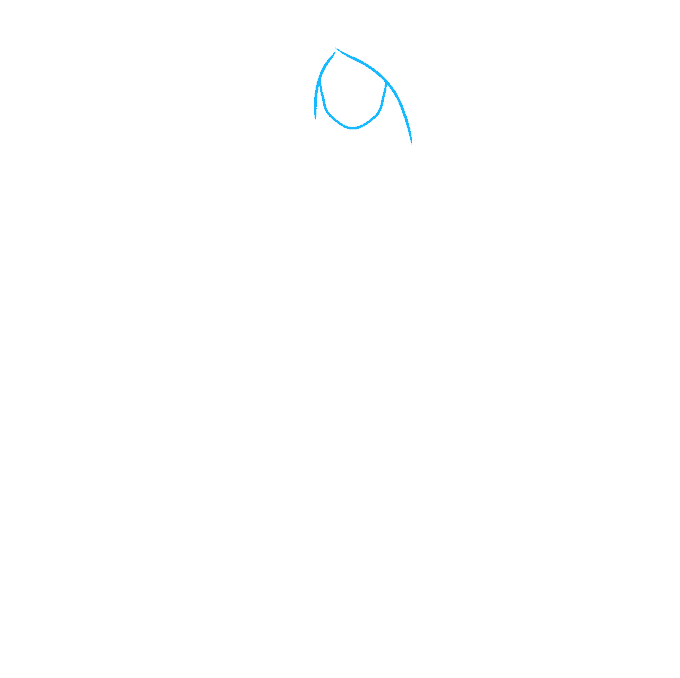 1. Begin by sketching Barbie's face. Use a curved line, noting the bulge of the cheeks and chin. Outline the hair using two curved lines that meet at a point above the face. 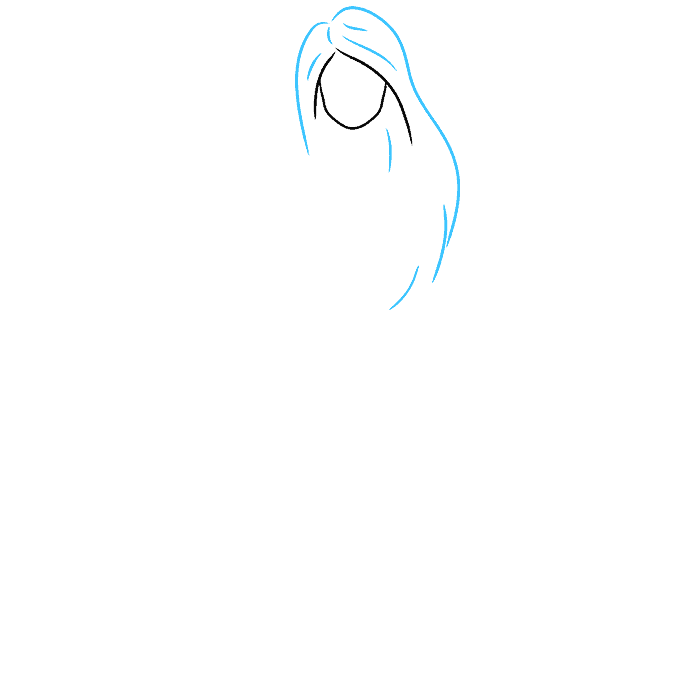 2. Draw Barbie's long hair. Use overlapping curved lines to sketch the hair, and texture it with additional curved lines. 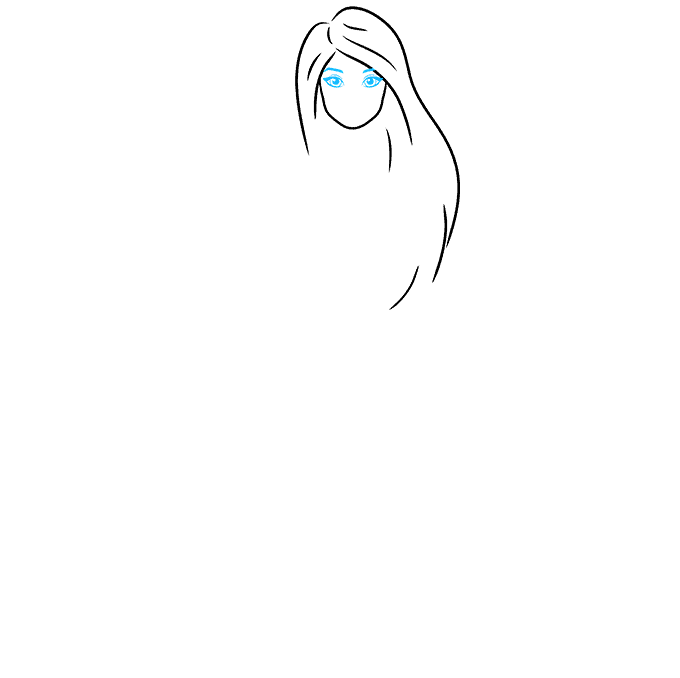 3. Draw Barbie's eyes. Outline the eyes with thick lines that meet at points on each corner. Draw several successively smaller circles within each eye, shading between the two smallest to indicate the pupil. Draw thick curved lines to form the eyebrows. 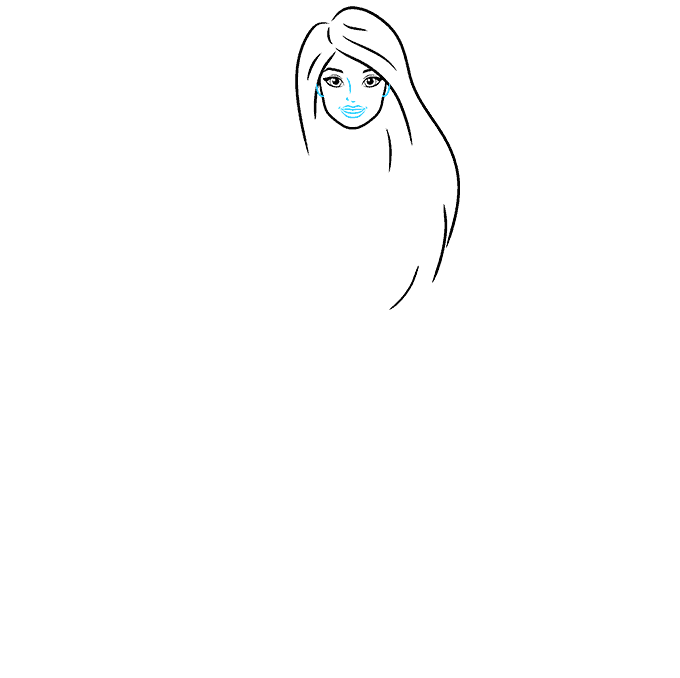 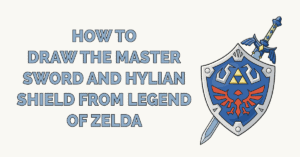 How to Draw a Voodoo Doll 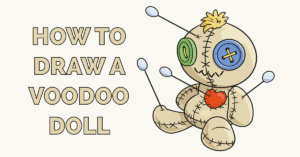 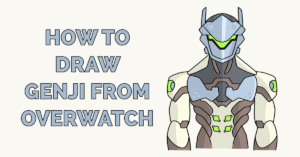 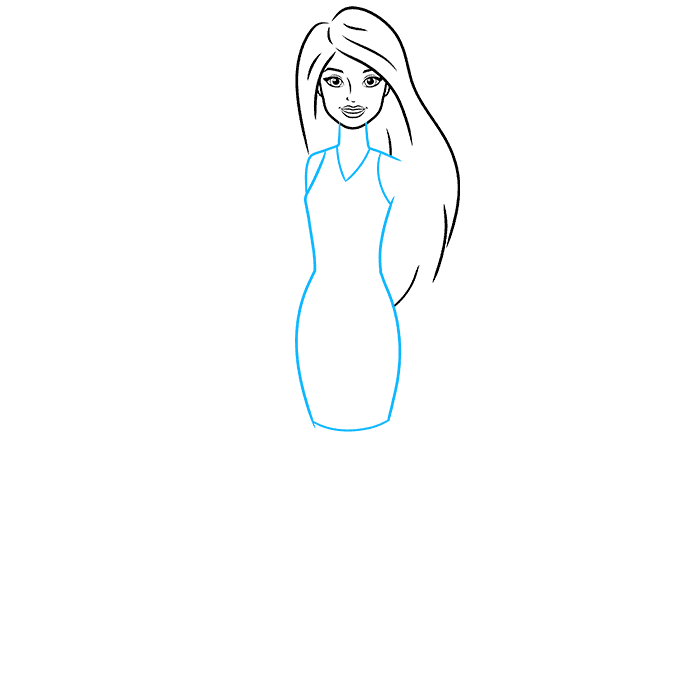 5. Sketch Barbie's body. Extend two lines below the head to form the neck. Connect these with a "V" shaped line to form the V-neck of Barbie's dress. Outline the dress using curved lines, and use additional lines to outline the shoulders. 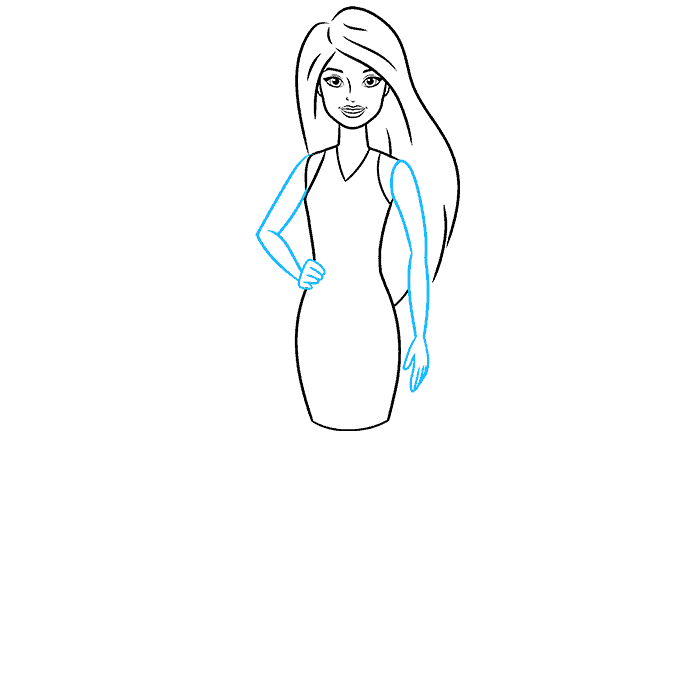 6. Draw Barbie's arms. Use pairs of curved lines to form the upper and lower arms. Draw the hands using curved and "U" shaped lines, erasing as necessary. Note that one arm is bent with the hand on the hip. 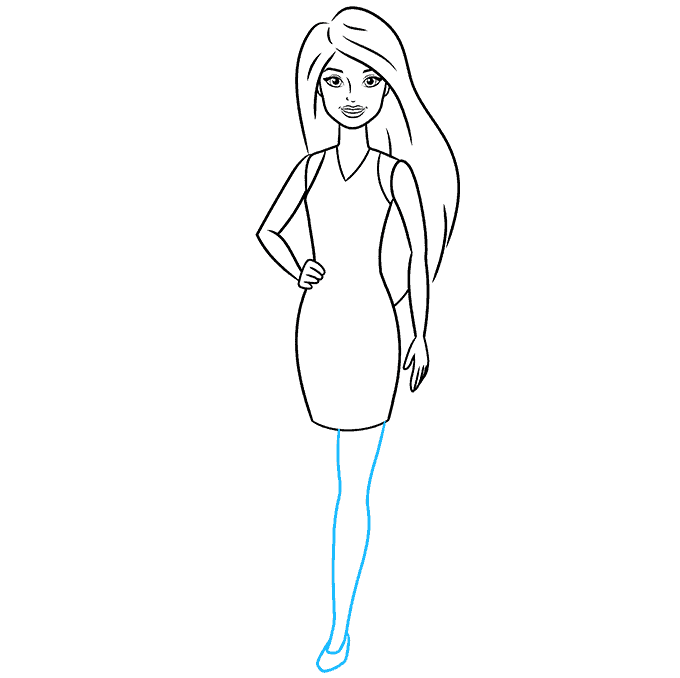 7. Draw Barbie's leg using a pair of long, curved lines. Connect them at the end, and enclose another curved line around the tip to form Barbie's iconic high heeled shoe. 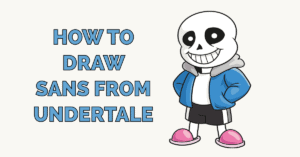 How to Draw Squidward from Spongebob Squarepants 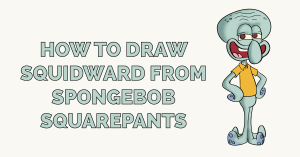 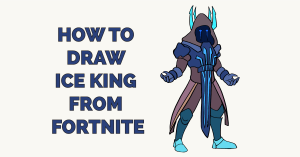 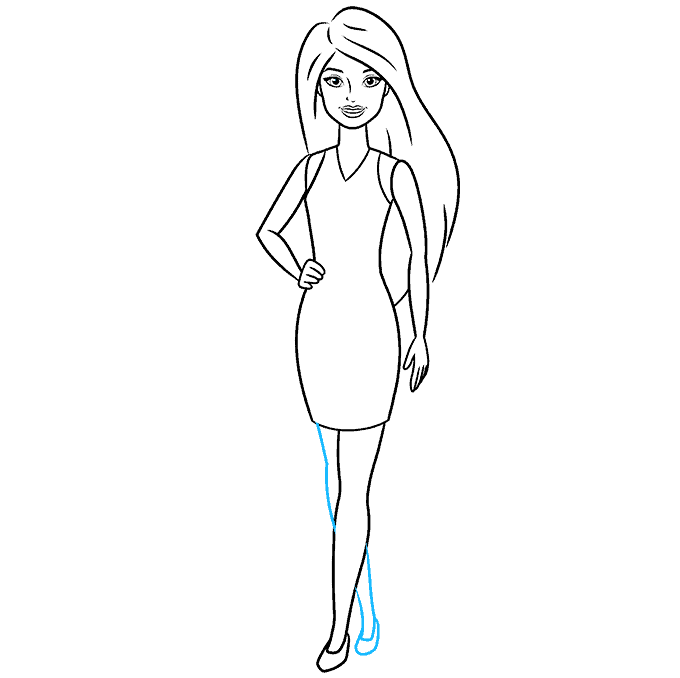 8. Draw the remaining leg, partially hidden behind the first. Use curved lines to draw the leg and to enclose the shape of the shoe.

Complete the Outline of Your Barbie Doll Drawing - Step 9 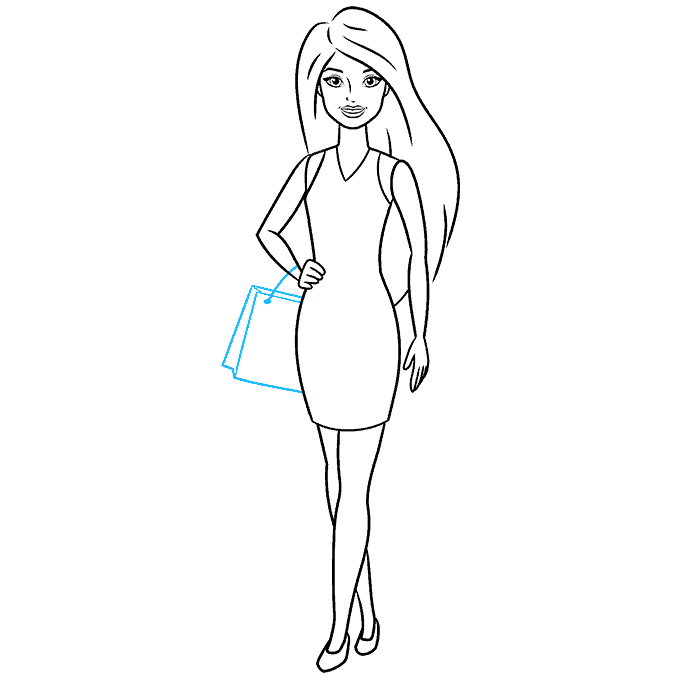 9. It's time to accessorize! Draw Barbie's purse, beginning with a square partially hidden behind her body. Draw straight lines parallel to two sides of the square, and connect them at the corner using "V" shaped lines. Shade a small circle near the top of the purse, and draw a curved line from it across the arm to form the purse's handle.

Color your cartoon of Barbie. You can decide what your Barbie doll looks like. Remember, her favorite color is Barbie pink! 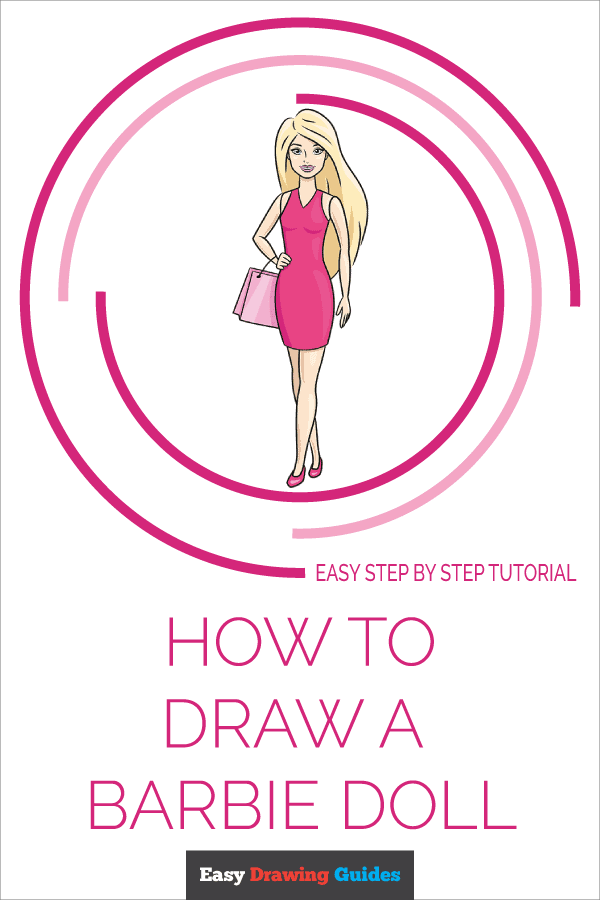 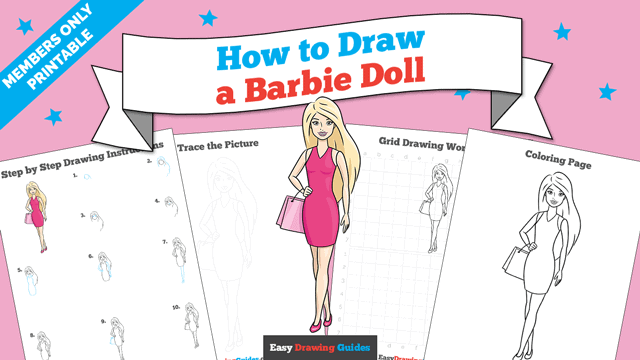