Bulls or oxen have been depicted in art since time immemorial. This is likely due to both their impressive strength and their proximity to humans. Cattle were among the first animals to be domesticated, and they were soon put to use pulling carts and plows and turning millstones.

The bull is still important in popular culture. The term "bull market" is used to describe a rising stock market, and a statue of a bull similar to the one in this tutorial is located outside the U.S. Stock Exchange.

Bulls were also some of the earliest cartoon characters. Bullfights were common in early Looney Toons cartoons. The children's book The Story of Ferdinand, whose title character was bull that would not fight, was released in 1936 and was recently made into an animated film.

Would you like to draw a fearsome cartoon bull? This easy, step-by-step ox drawing tutorial can show you how. All you will need is a pencil, an eraser, and a sheet of paper.

If you liked this tutorial, see also the following drawing guides: Buffalo, Donkey, and Cartoon Cow.

Step-by-Step Instructions for Drawing a Bull

1. Begin by sketching the bull's head. Use a series of curved lines to sketch the irregular shape. Note the bulges of the snout, eye socket, and horns.

2. Draw the ox's ears and nose, erasing as necessary. For each ear, extend two curved lines from the side of the head and allow them to meet at a point. Then, draw a similar pointed shape within each ear, again using two lines. Next, use curved lines to draw the peanut-shaped nose at the end of the snout.

3. Draw the horns, erasing as necessary. For each horn, use two curved lines that meet at a point. Add dimension by drawing a short line around the base of the horn.

4. Use long, curved lines to outline the ox's back and torso. Extend one line from the top of the head, the other from the snout.

How to Draw a Bull Skull

5. Continue to sketch the animal's body using long curved lines. Notice the overlapping lines of the lower back, hip, and knee. After the lines taper to form the leg, connect them at the bottom using a short curved line. Band the bottom of the leg with a curved line, distinguishing the hoof. Split the hoof by shading a small triangle within it.

6. Draw the front leg, erasing as necessary. Use a series of overlapping curved lines to sketch the leg. Note the overlaps that indicate muscle at the shoulder and the bulges at the knee and ankle. Connect the sides using a short, curved line at the bottom. Then, draw the hoof. Enclose a trapezoid with rounded corners. Then, split the hoof by drawing a triangular notch in the middle.

7. Draw the far legs. Use pairs of curved lines to outline both the front and rear legs. At the bottom of each leg, enclose the hoof, making sure to include the triangular notch. 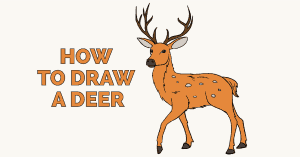 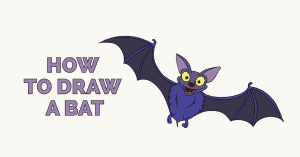 8. Detail the bull's face. Enclose two curved shapes on the tip of the snout to indicate nostrils. Enclose a similar shape to house the eye, and draw a circle within a circle inside it. Draw curved lines in the middle of the forehead and down the center of the chest.

9. Don't forget the tail. Extend two long, curved, parallel lines from the bull's body. Connect them at the end by drawing a tuft of fur, using curved lines that meet at jagged points.

Color your bull. Oxen come in a variety of colors, including red, white, brown, black, and grey. Many are spotted.

You can learn to draw many other cartoon animals. Check out our selection of animal drawing guides today!

The Complete Bull Drawing Tutorial in One Image

How to draw: Bull - all drawing steps