A ponytail is a hairstyle in which all or some of the hair is secured at the back of the head. It is so named because it resembles the shape of the tail of a pony or horse. Today, ponytails are most often worn by women and girls, but they are sported by some men as well.

The ponytail may be a fashion statement or a utilitarian hairstyle. For example, it keeps the hair out of the face while exercising or playing sports. It can keep hair from becoming dangerously entangled in machinery while working or keep it from falling into a food preparation area.

Images of women wearing ponytails can be found in ancient Greek artifacts, and European art has included the hairstyle for centuries. In parts of Asia, the wearing of ponytails by men was mandatory hundreds of years ago. During the 1700s and 1800s, European men often tied their hair back with a ribbon, a style known as a queue, which means "tail" in French. This, two, was mandatory for soldiers in certain armies.

In the mid-twentieth century, the advent of the Barbie doll and beach culture films such as Gidget increased the ponytail's popularity among women. Rock stars during the 1980s promoted the ponytail among men.

Different styles of ponytails go by different names. If two ponytails are worn, the hairstyle may be called pigtails, dog ears, or bunches. If braided, they are referred to as plaits or braids.

Would you like to draw a cartoon of a woman wearing a ponytail? This easy, step-by-step cartoon drawing tutorial is here to show you how. All you will need is a pen, pencil, or marker and a sheet of paper. You may also wish to color your finished drawing.

Step-by-Step Instructions for Drawing a Ponytail

1. Begin by sketching the woman's face. Use one curved line for the face, and another for the neck. Note the bulge of the brow, cheek, and chin. Draw a short curved line to indicate the eyelashes.

2. Begin sketching the hair on top of the head using overlapping curved lines. Note the lines that meet at a sharp point, forming a loose lock of hair.

3. Draw overlapping curved lines to form the hair on the side of the head and at the base of the neck. Draw another curved line to indicate the ear.

How to Draw a Beard 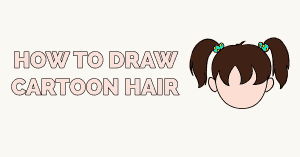 5. Draw long curved lines across the hair, with the ponytail as the central point.

6. Draw another "C" shaped line across the hair tie or scrunchy. Then, extend a long curved line down the back of the neck to outline the bottom of the ponytail.

7. Draw long, overlapping curved lines extending from the hair tie, outlining the top of the ponytail.

8. Connect the ends of the ponytail using a series of short curved lines that meet at jagged points.

9. Texture the hair by drawing curved lines of different sizes down the length of the ponytail.

Color your cartoon woman. Blonde, brunette, red, or brown - her hair color is up to you!

The Complete Ponytail Drawing Tutorial in One Image

How to draw: Ponytail - all drawing steps