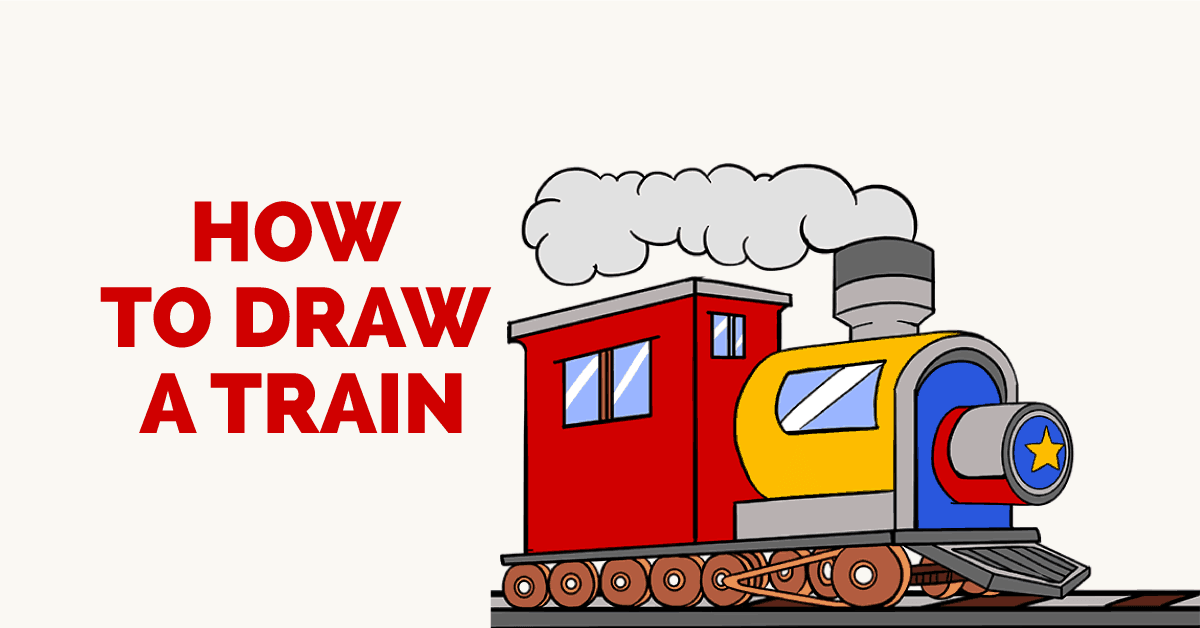 Rail lines called wagonways were invented as long ago as 1500. It was not until the 1820s, however, that mechanical trains were invented. These trains were powered by steam and were similar in design to the train featured in this drawing tutorial.

Many other types of trains have since been invented, including underground subway trains powered by electrified rails, and the futuristic Maglev train that uses magnetic repulsion to hover above its tracks.

Fictional trains are often given charming personalities. A few of the most famous cartoon trains include Thomas the Tank Engine and The Little Engine That Could.

Can you draw a cartoon train? Keep a positive attitude like that Little Engine - "I think I can, I think I can..." - and use this easy, step-by-step drawing tutorial. All you will need is a pencil and a piece of paper. In each step of this drawing guide, new lines to be added are shown in blue. You may want to have an eraser handy to remove guide lines and correct mistakes.

You may use crayons, markers, colored pencils, paints, or any other supplies you may have to color your finished train.

If you liked this tutorial, see also the following drawing guides: Soccer Ball, Sword, and Robot.

Step-by-Step Instructions for Drawing a Train 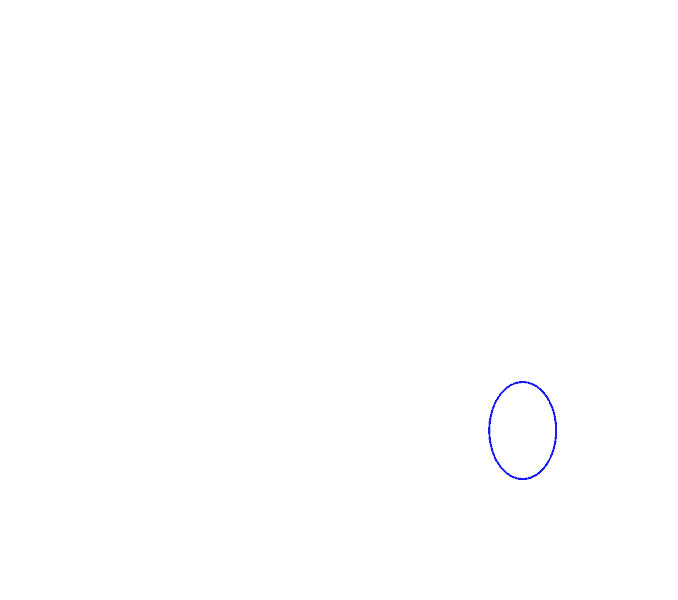 Begin by drawing an oval. This will be your starting point at the front of the engine. 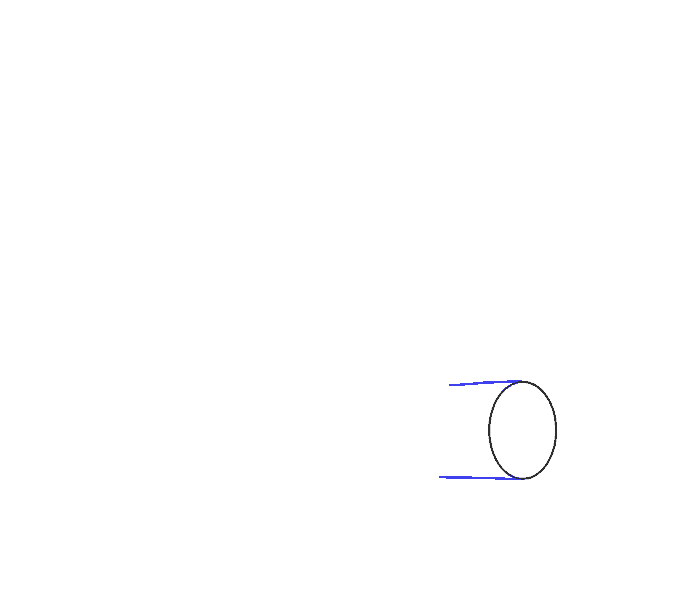 Extend straight, parallel, horizontal lines from the top and bottom of the oval, forming a cylinder shape. 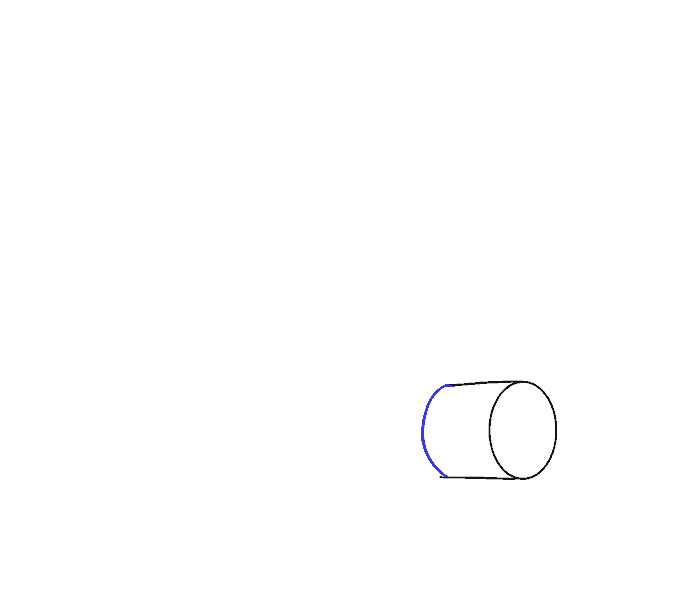 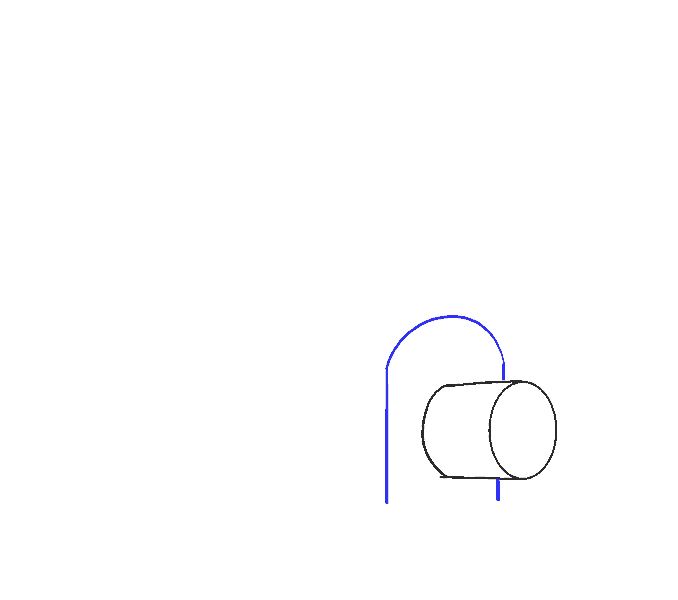 Draw an arch around the cylinder. The arch should consist of two straight, parallel, vertical lines, connected at the top by a curved line. 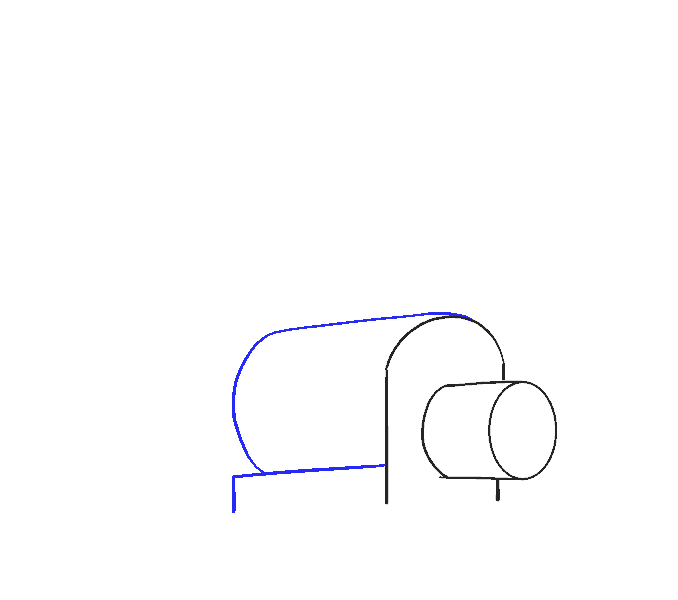 Extend two straight lines from the arch. Connect them using a curved line, enclosing another cylinder shape. Extend the bottom line past the cylinder, and draw a short, straight line below it, meeting at a right angle. 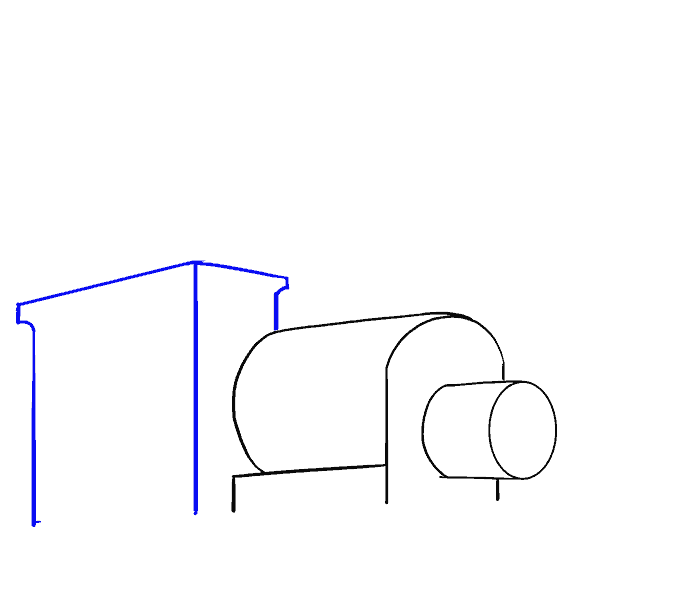 Draw the cab of the train. Begin by drawing three straight, vertical lines. Draw a small curved line and a short, straight line at the top of the outermost lines. Then, connect the lines using straight lines, forming a three dimensional shape. 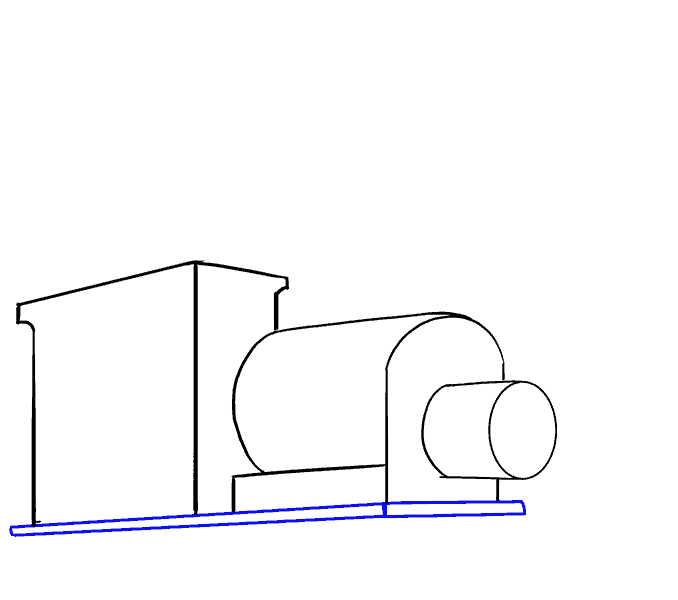 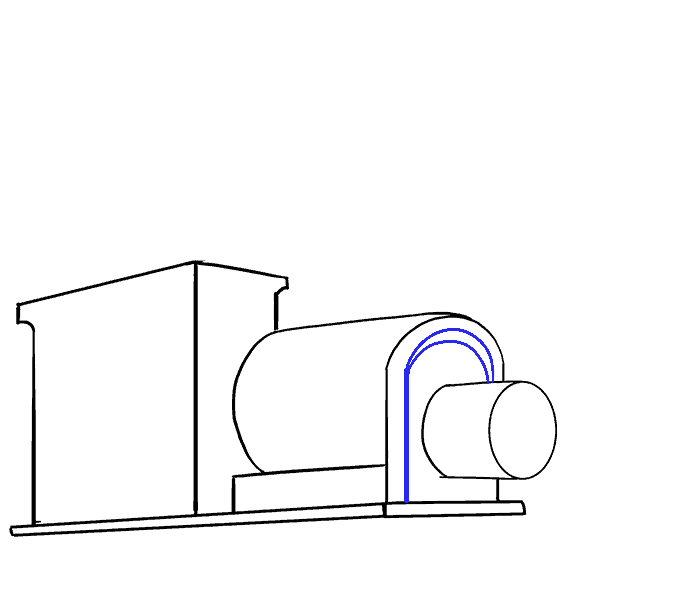 Draw a smaller arch within the previous arch. Then, draw a curved line across the top of the smaller arch. 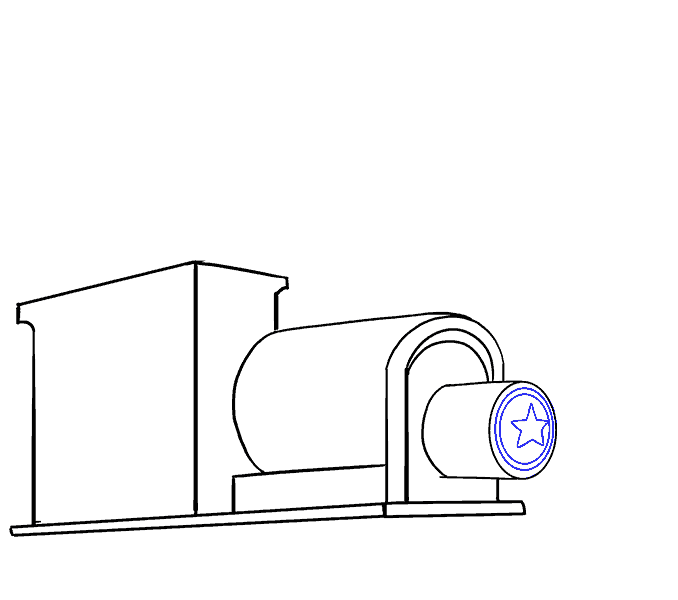 Inside the original oval, draw an oval within an oval. Then, draw a star inside the innermost oval. 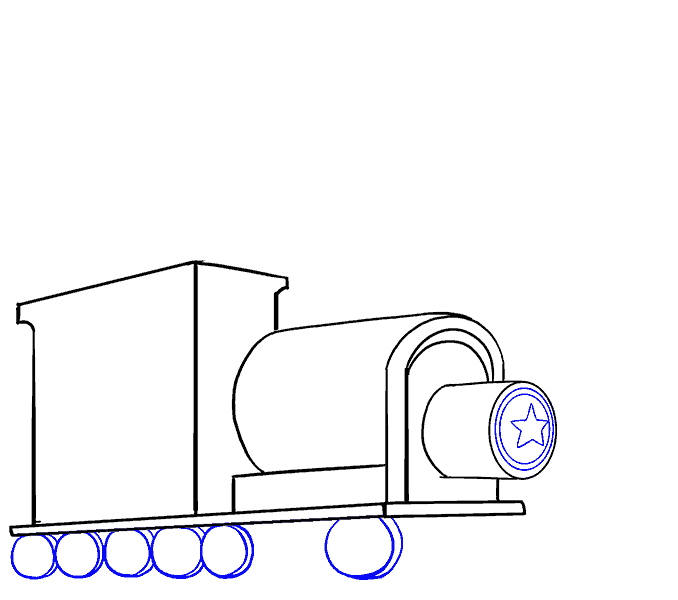 Draw a series of circles beneath the train to form the wheels. Then, draw a curve on one side of each wheel to give the wheels depth. 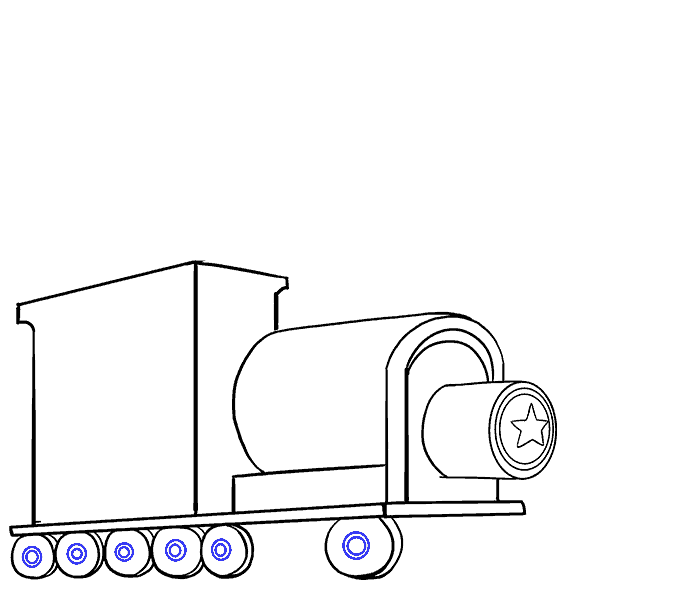 Draw the hub of each wheel using a small circle within a circle. 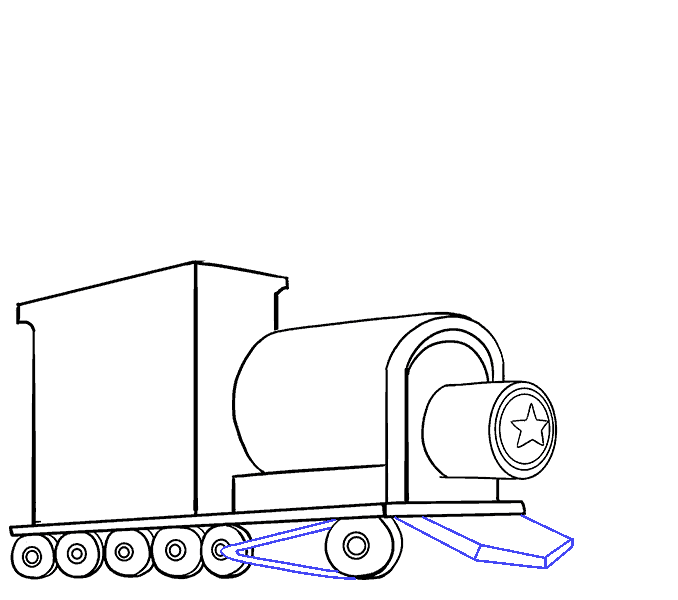 Draw the "cow catcher," or safety grate, at the front of the train. Begin by drawing a diagonal, nearly upside down pentagon. Enclose three sides of the pentagon with narrow rectangles. Between the first and second wheel, draw a triangle within a triangle. 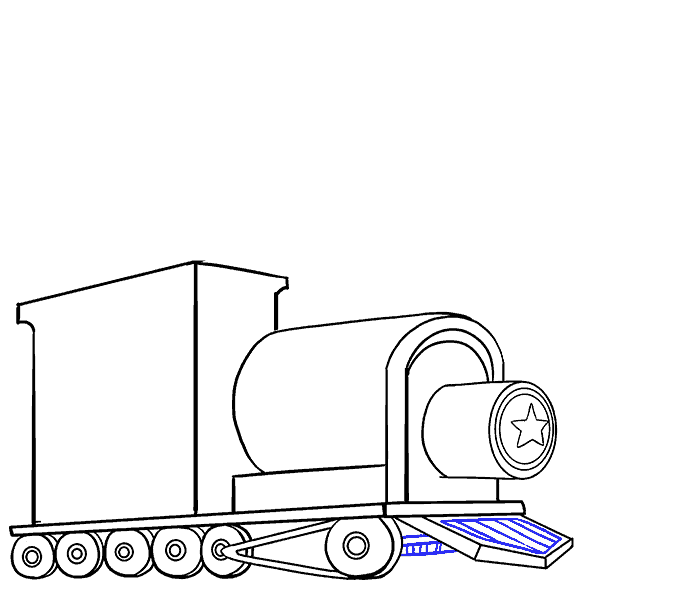 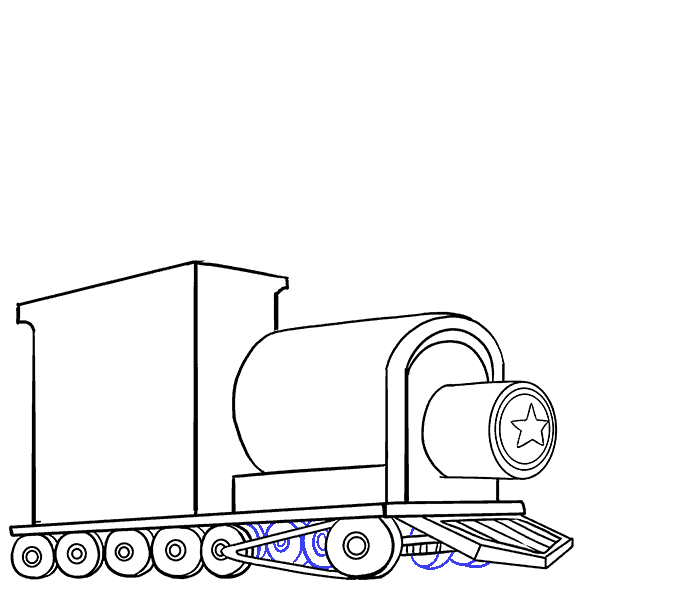 Draw the wheels on the other side of the train between the grate and first and second wheels. Don't forget the curve that adds depth and the circular hub caps. 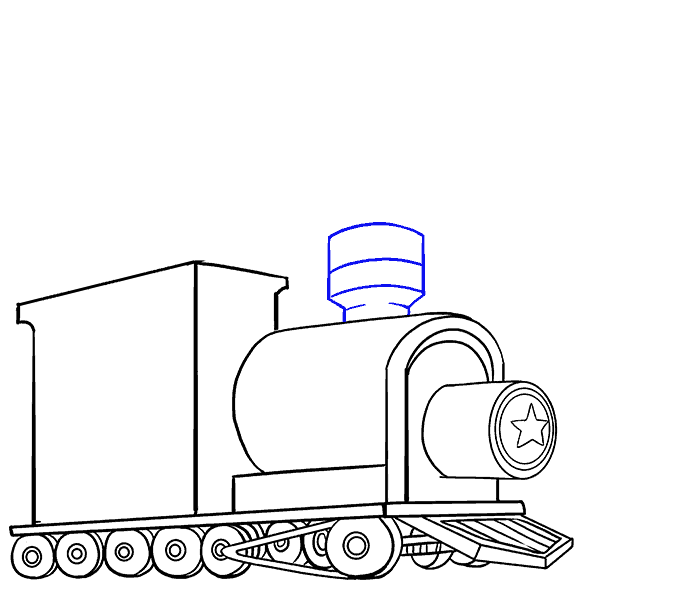 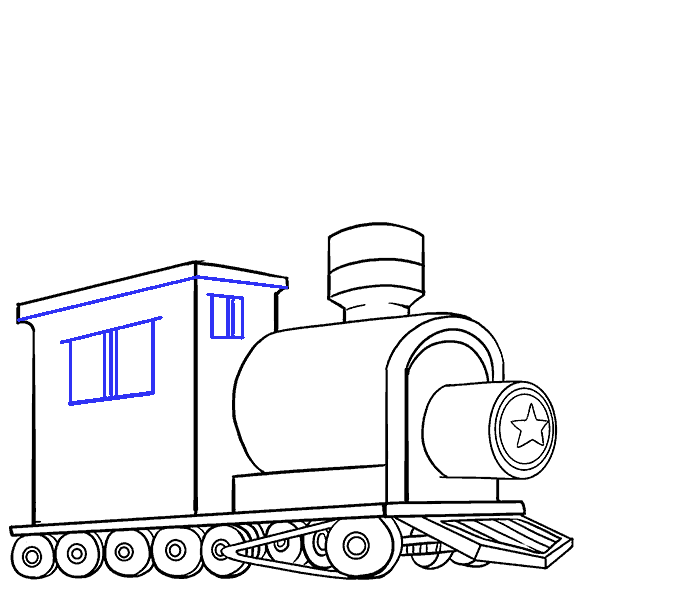 Draw straight lines parallel with the roof of the cab. On the front and side of the cab, draw rectangles to form the windows. Then, draw vertical lines through the windows. 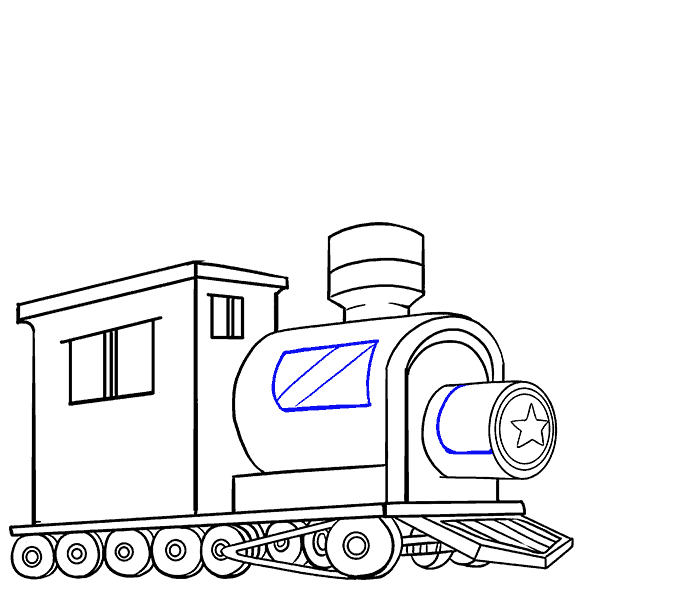 Detail the front of the train. Draw a curved rectangle on the large cylinder, and cross it with a set of diagonal lines. On the small cylinder, enclose a shape using a curved line. 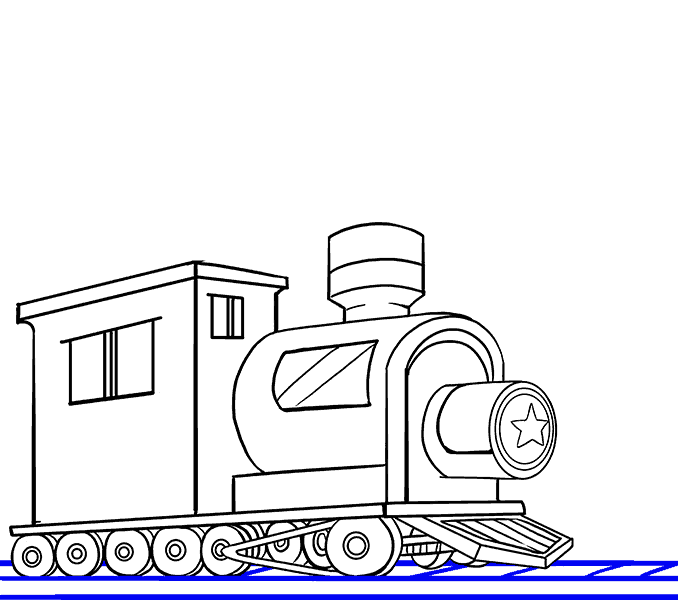 Draw the track beneath the train using three parallel lines. The near lines form one side of the track. Draw lines between the upper and middle line to form the cross ties. 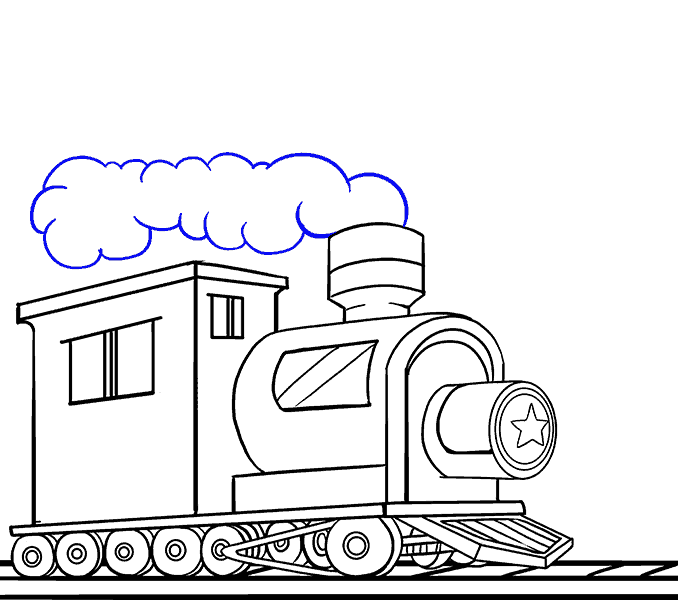 Enclose a shape above the smoke stack using many curved lines. This cloud-like shape is the steam or smoke created by the train's engine. 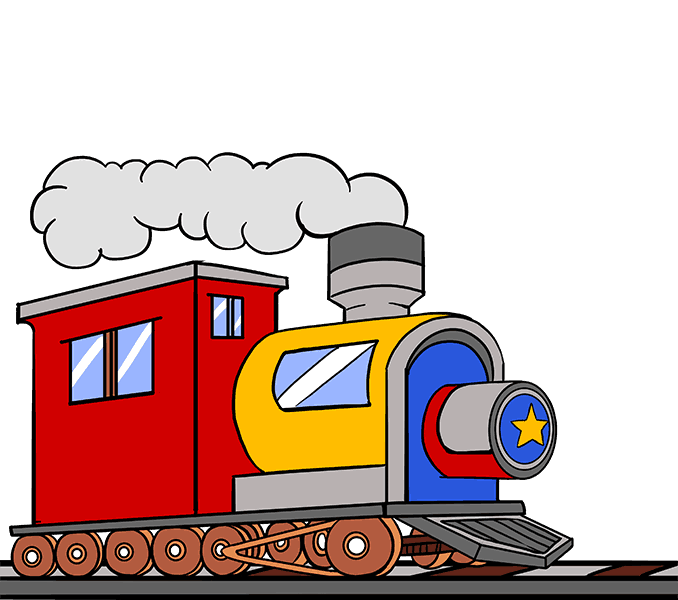