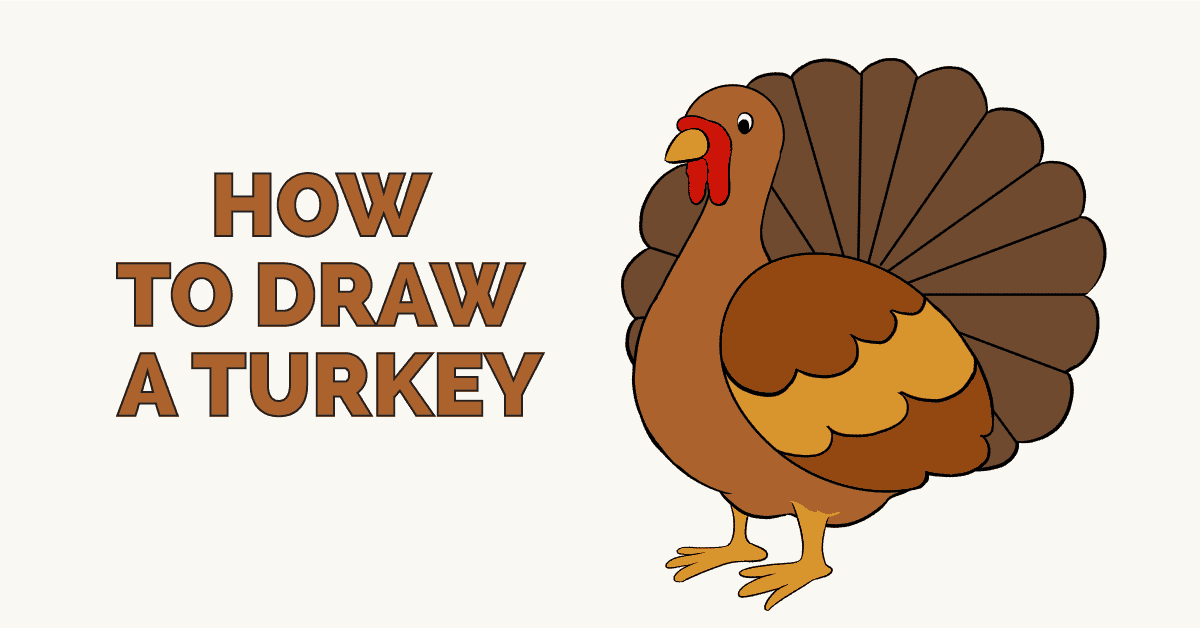 Turkeys are large birds native to the Americas. The turkey was first domesticated in Mexico around 800 B.C., and it has since been farmed for its meat and feathers.

When European settlers first discovered the animal, they brought it back to the Eurasian continent.

The merchant ships traveled through nation of Turkey, and the bird began to be raised there. This is likely how the turkey got its name.

Domesticated turkeys are now found in barnyards throughout the world, but the smaller wild turkeys can still be seen in their native habitat.

In the United States, for instance, it is not uncommon to see small flocks of a few individuals strolling through backyards and neighborhood parks. In rural areas, a single flock may include hundreds of individuals.

Male turkeys dance and use their brightly colored tails and wattles to attract a mate.

The turkey has appeared in artwork for a very long time. Its feathers (learn to draw bird feathers) were used by Native Americans to make blankets, robes, and ceremonial garb. It is one of the birds featured in John James Audobon's famous Birds of America.

In 2010, turkeys played a starring role in the animated film, Free Birds, in which a time traveling turkey tries to change history by making pizza the official food of Thanksgiving.

Would you like to draw your very own turkey? Doing so is easier than ever with this simple, step-by-step drawing tutorial.

All you will need is a pencil, an eraser, and a piece of paper. You may also wish to use paints, crayons, colored pencils, or markers to shade your finished drawing.

In each step, follow the written instructions as well as the accompanying illustration. New lines are highlighted in blue.

Are you ready to gobble up this turkey drawing guide?

If you liked this tutorial, see also the following drawing guides: Chicken, Feather, and Duck.

Step-by-Step Instructions for Drawing a Turkey

2. Connect the head and wing using a long, curved line and a short, curved line. The enclosed shape forms the turkey's neck and body.

3. Add feathers to the wing. Do so by drawing several scalloped, curved lines across the wing.

4. Draw the beak using curved lines, forming a rounded triangle. Draw a circle to indicate the eye, and a smaller circle within it. Shade the smaller circle.

5. Erase the guide lines from the beak and wing.

6. Draw the turkey's wattle, the fleshy adornment around its beak. Do so by enclosing irregular shapes using curved lines. Then, draw the feet. For each foot, extend two curved, parallel lines from the body, forming the legs. Then, use a series of curved, "U" shaped lines to enclose the toes.

7. Erase the guide lines from the legs and wattle.

8. Draw the turkey's fan-like tail. Draw a long, scalloped line - a line made of short, curved lines connected to one another.

9. Add detail to the tail. Draw a straight line from the base of the tail to each of the downward points along the scalloped line, indicating individual feathers.

10. Color your turkey. Turkeys are generally brown with a red wattle, but they can include tones of grey, orange, and even blue or green. Some turkeys are solid white.

The Complete Turkey Drawing Tutorial in One Image

How to draw: Turkey - all drawing steps