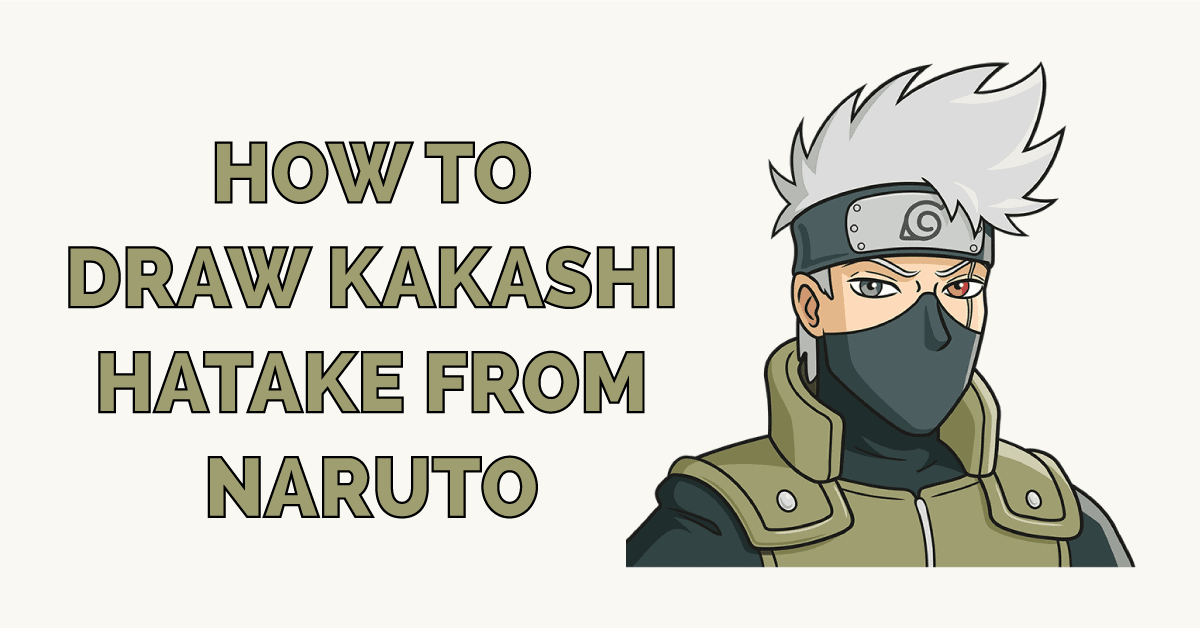 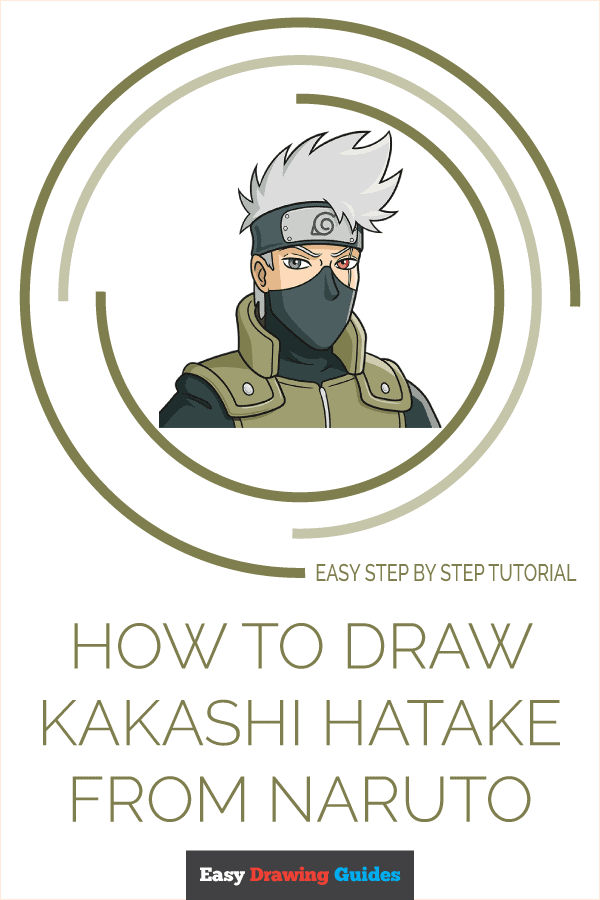 Naruto is an action-adventure and comedy fantasy series drawn in Japanese anime style.

Kakashi Hatake first appeared in the series in 1999.

Kakashi is a teacher to Team 7, of which the show's titular character is a member. He is a skilled ninja, easygoing, and an emphatic rule follower. He had a difficult childhood, as his father died in disgrace. He had become an accomplished ninja by age five. He lost his eye in battle, and it was replaced by a Sharingan.

Did you know? Kakashi means "scarecrow" in Japanese. This phrasing has often played a role in the artwork, as when scarecrows appear in the background or when Naruto uses a scarecrow dressed like Kakashi for training.

Kakashi wears a mask. His drawing can be a reminder to anime fans to wear theirs, too!

Would you like to draw Kakashi Hatake from Naruto? This easy, step-by-step cartoon character drawing tutorial is here to show you how. All you will need is a pen, pencil, or marker and a sheet of paper. You may also wish to color your finished drawing.

If you liked this tutorial, see also the following drawing guides: Naruto, Sasuke Uchicha from Naruto, and Anime Boy Face. 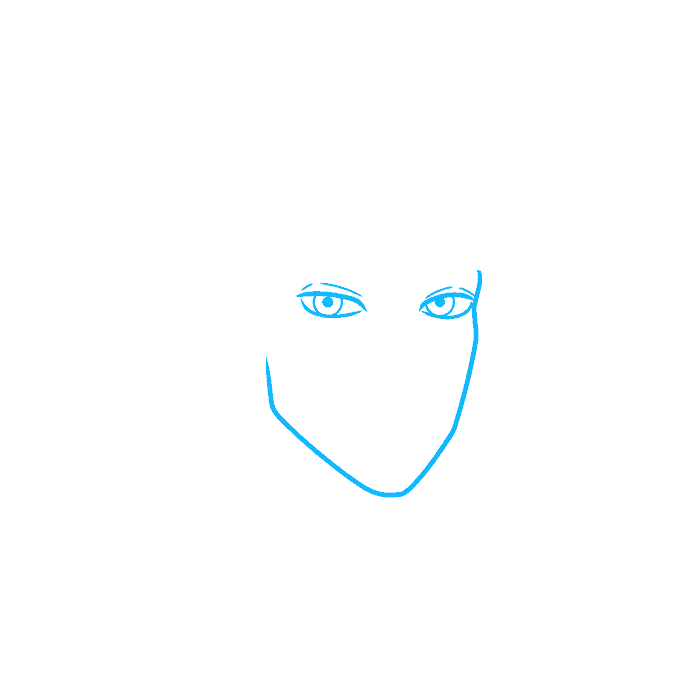 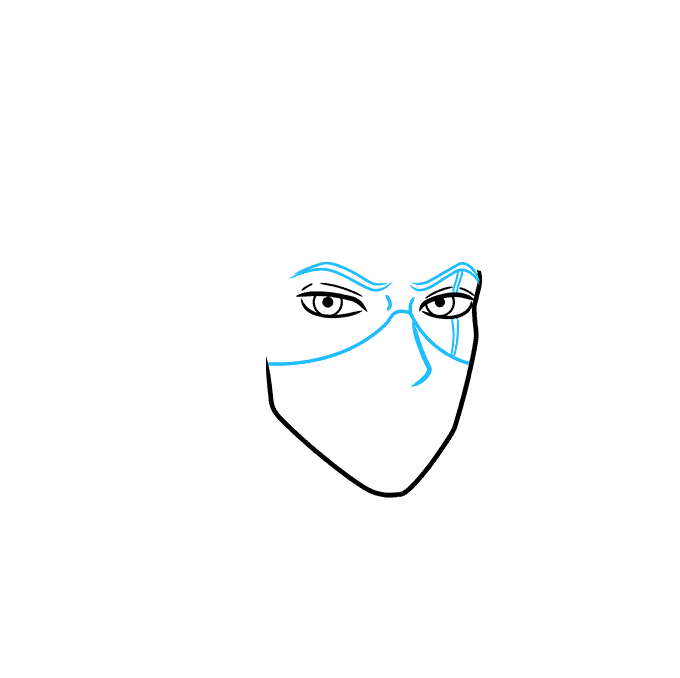 2. Use pairs of curved lines to draw the eyebrows, pointed on each end. Draw a curved line across the face, upturned where it crosses the nose. Use a long and short curved line to outline the nose itself. Then, draw a pair of curved lines above and below one eye to indicate Kakashi's scar. 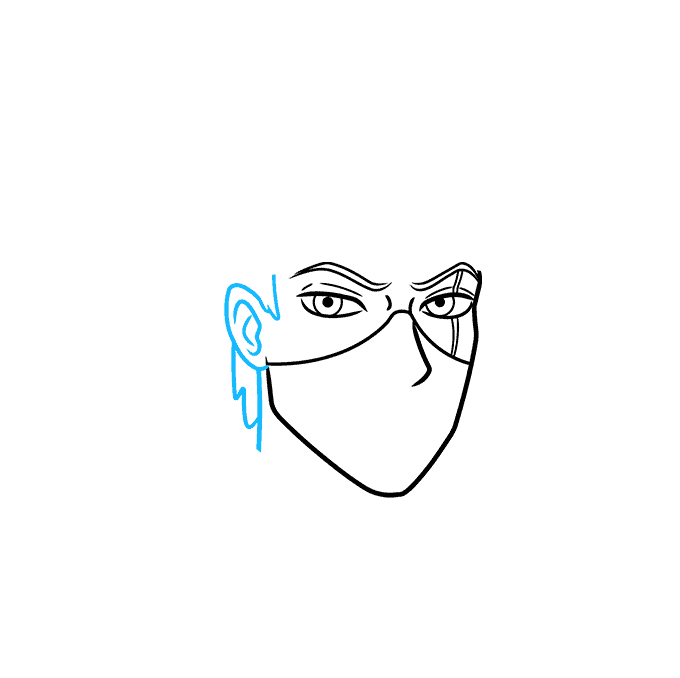 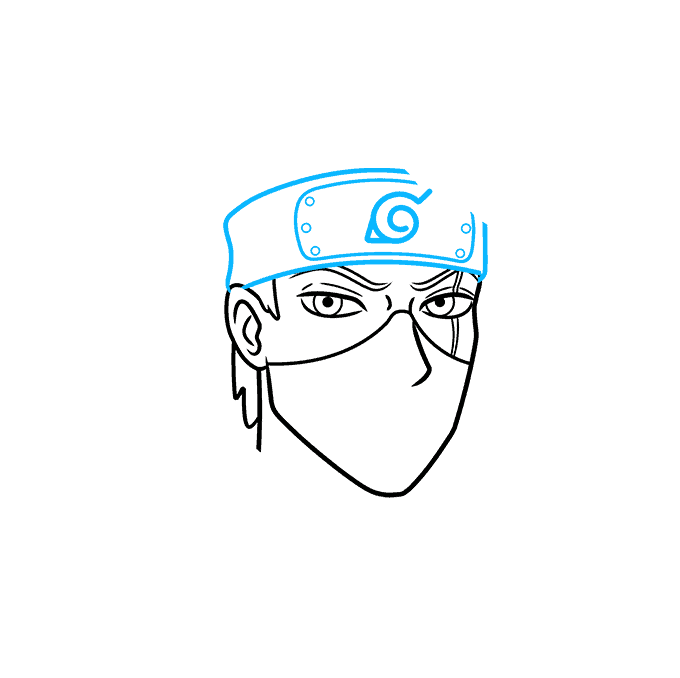 4. Draw Kakashi's Leaf Village headband. Use curved lines to outline the rectangular shape, as well as the rounded rectangular shape of the metal plate. Draw small circles on the edges to indicate the rivets that hold it together. In the middle of the plate, sketch the spiral and triangle symbol of the Leaf. 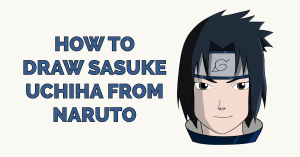 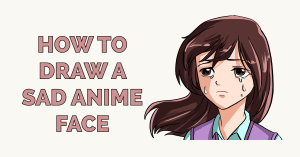 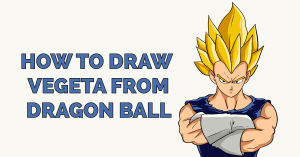 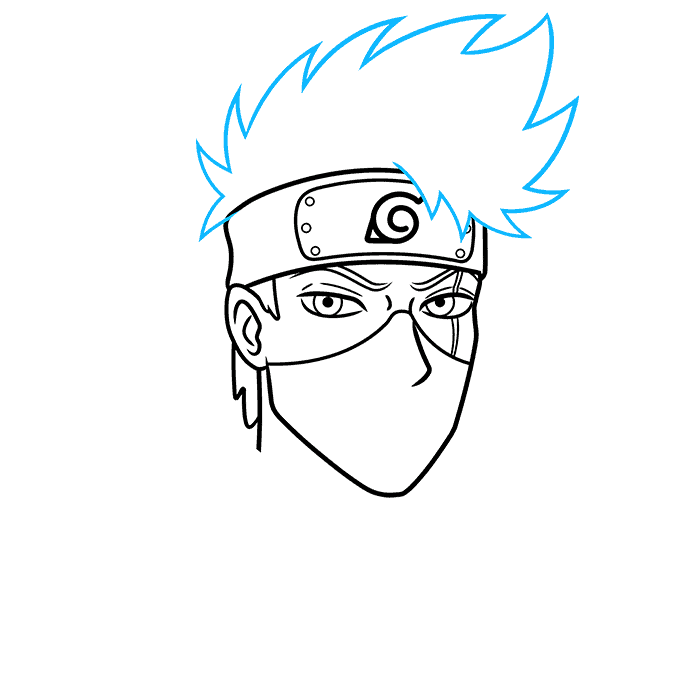 5. Use a series of short curved lines that meet at jagged points to draw Kakashi's hair. Notice how some of the hair falls forward across the headband. 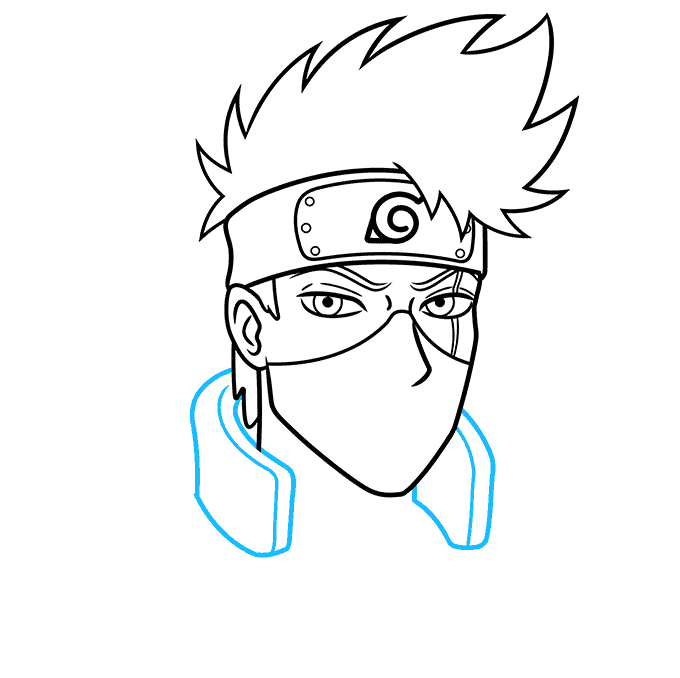 6. Draw the collar of Kakashi's garment. Use curved lines to sketch the curved rectangular shapes. Then, draw a curved line along the top and front of each side to give it a three-dimensional appearance. 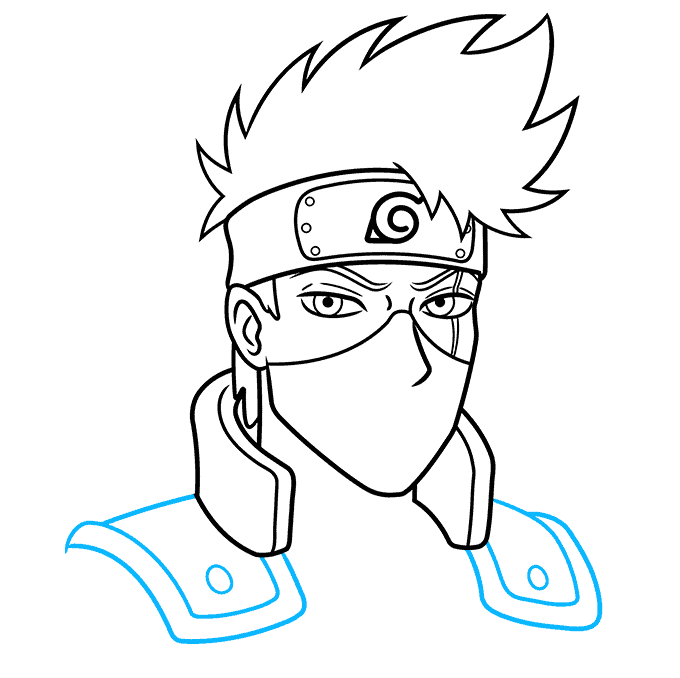 7. Draw Kakashi's shoulder pads. Use curved lines to sketch the rounded and curved rectangular shapes. Then, draw a small circle near the bottom of each. 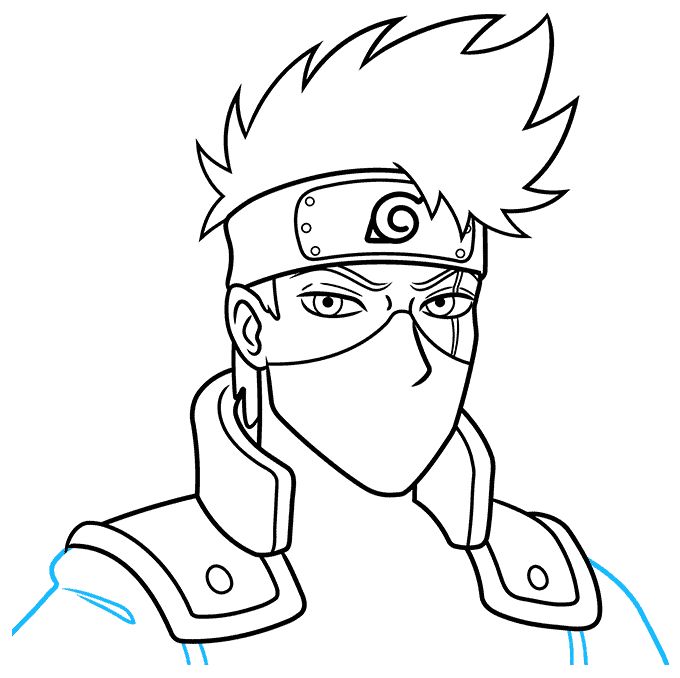 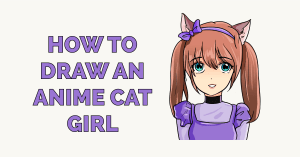 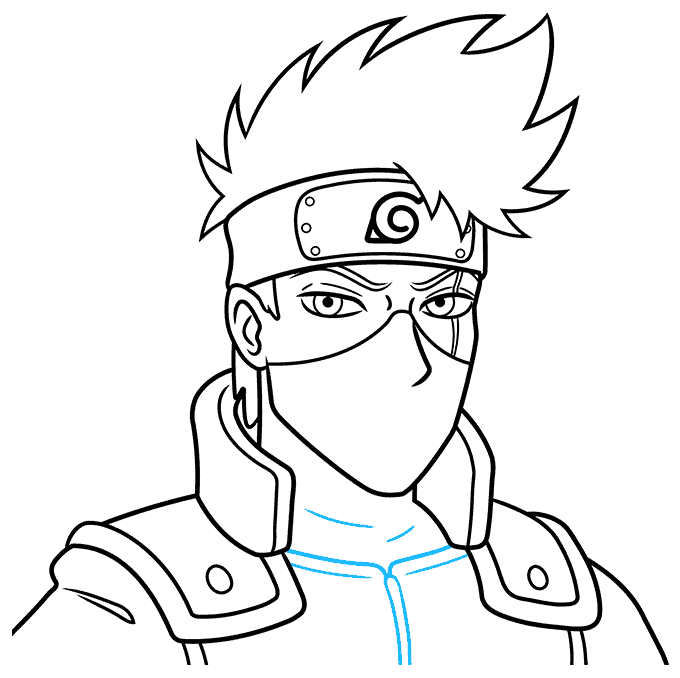 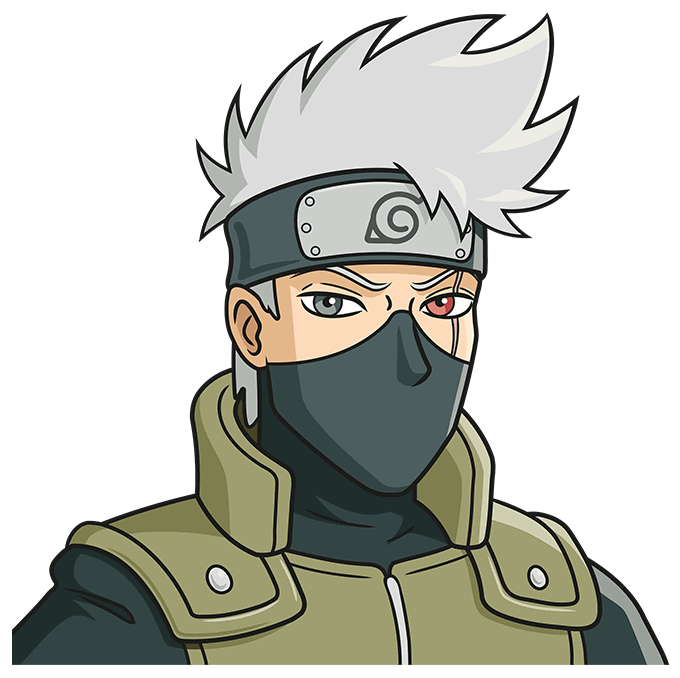 Color your cartoon of Kakashi Hatake. He wears green and black clothing, and his hair is silver. One eye is grey and the other is red.

Check out our other Naruto and anime cartoon characters.

The Complete Kakashi Hatake from Naruto Drawing Tutorial in One Image

How to draw: Kakashi Hatake from Naruto - all drawing steps 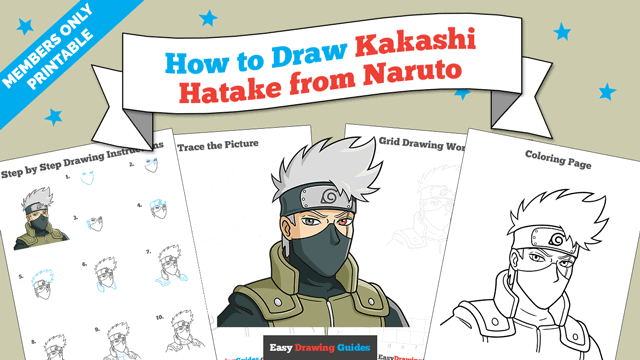