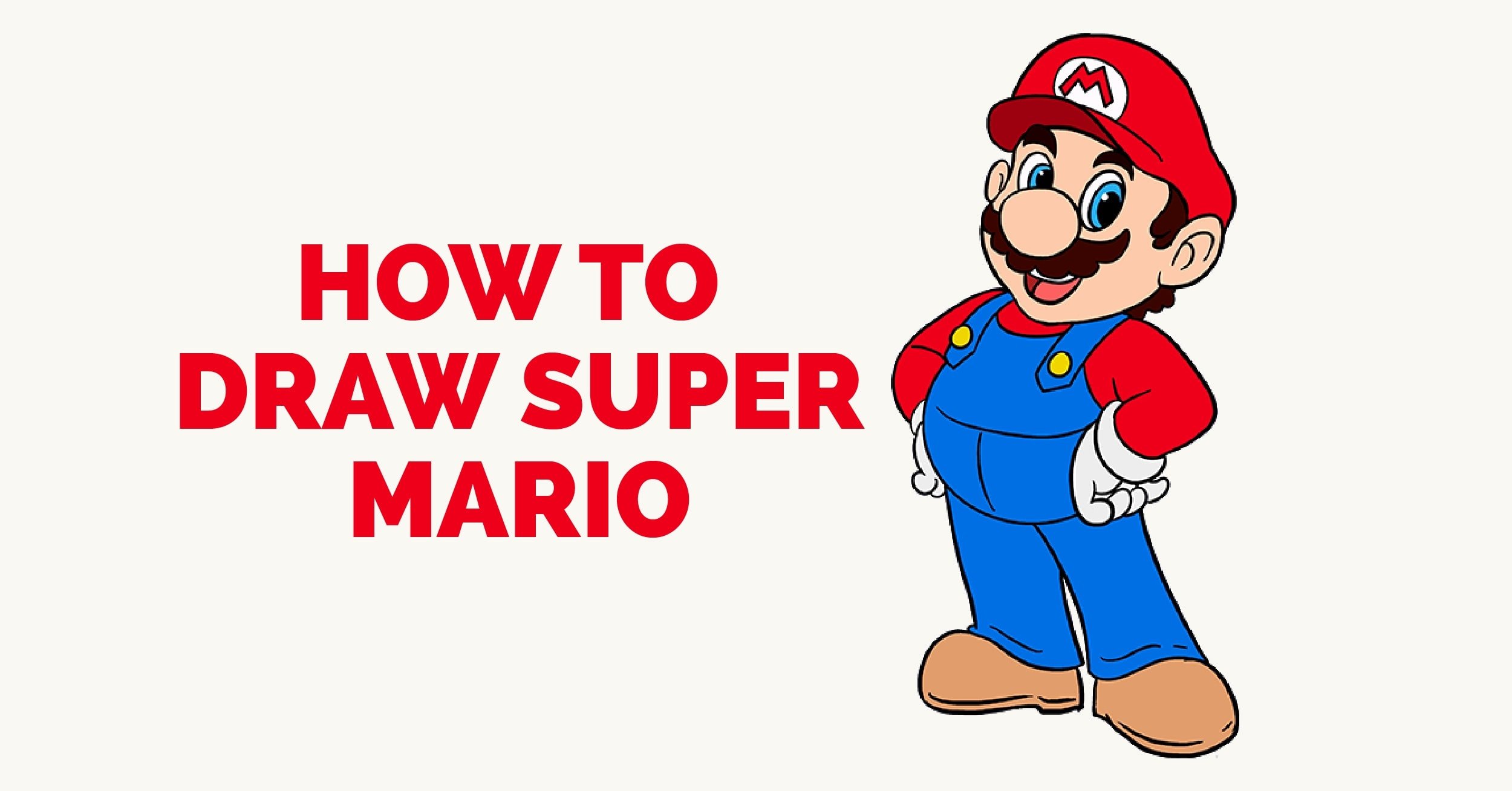 Mario first appeared in the arcade version of Donkey Kong in 1981. Originally called "Mr. Video”, and later "Jumpman”, Mario has since appeared in over two hundred different video games.

Considered the most successful video game franchise of all time, Mario is the premier mascot of the Nintendo corporation. The character has also featured in books, television series, films, and merchandise.

Mario is said to be of Italian descent, having been born on Yoshi's Island. When he's not rescuing Princess Peach from evil villains, he pursues a career as a plumber. Mario becomes "super" when he collects power ups that grant him various powers.

Would you like to be able to draw Super Mario? If you have a pencil and a piece of paper, you can, using the step-by-step tutorial below. This drawing guide is easy to follow. Simply add the blue highlighted lines in each step. Have an eraser handy, so you can erase mistakes and guide lines as needed. You may also wish to use markers, colored pencils, or crayons to shade your finished picture.

If you liked this tutorial, see also the following drawing guides: Pikachu, Charizard, and Batman. 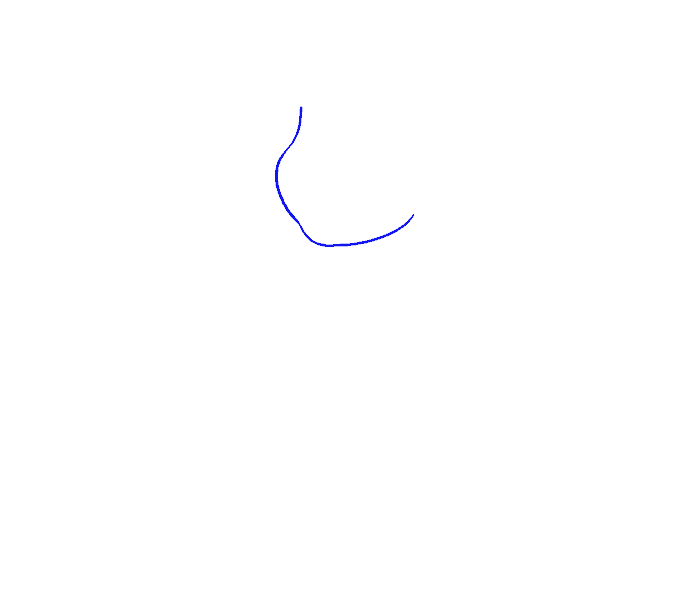 Begin by drawing a curved line. This will outline Mario's face and jaw. 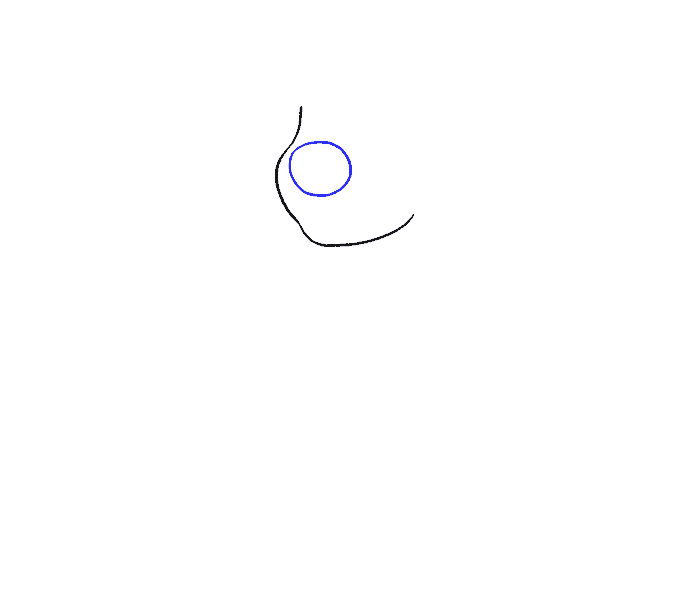 Next, draw a circle within the curve of the line. This will form Mario's nose. 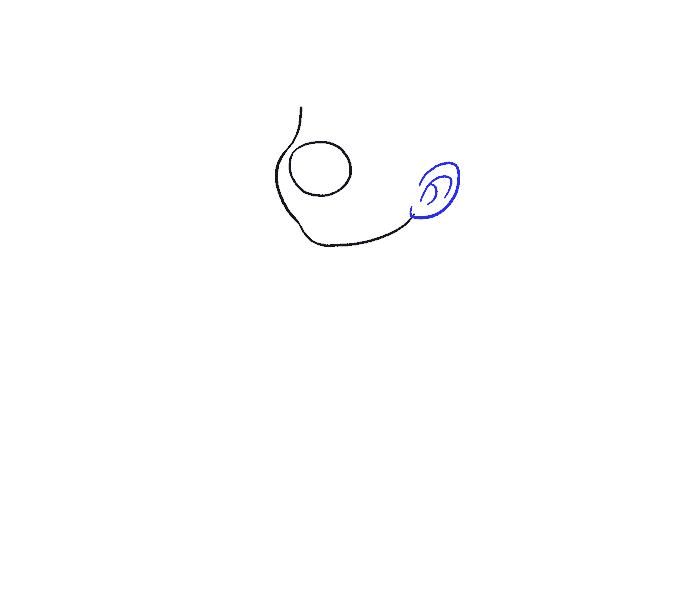 Draw Mario's ear. To do this, draw a curved line, nearly completing an oval. Within the figure, draw two connected, curved lines. These lines detail the folds of the ear. 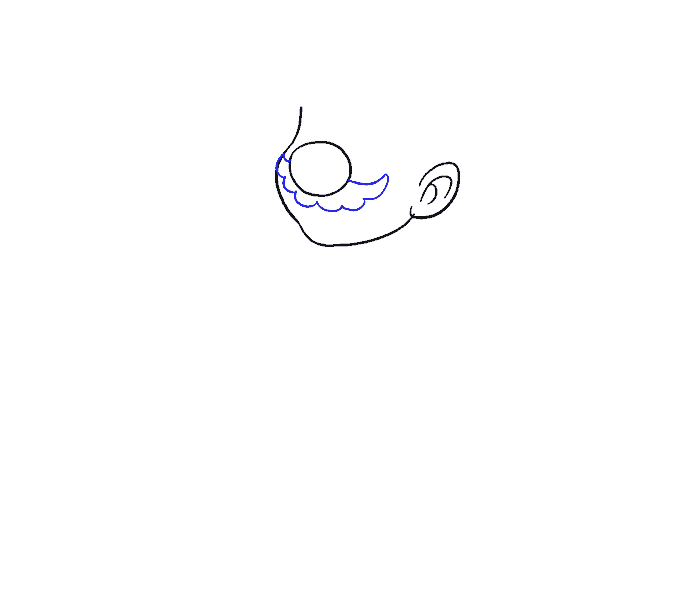 Draw Mario's mustache. Extend a short, curved line from each side of the nose. Below this, draw a series of short, connected, curved lines to form a scalloped design. This scalloped line will connect the ends of the mustache. 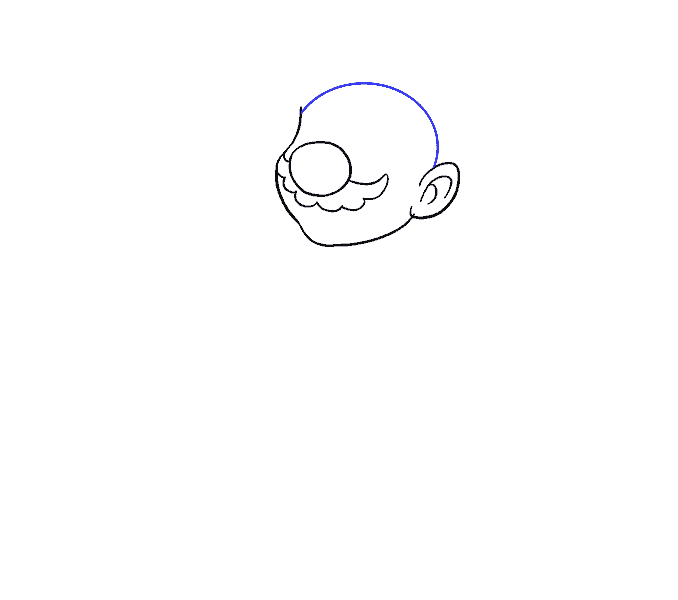 Draw a curved line to form the top of the head. 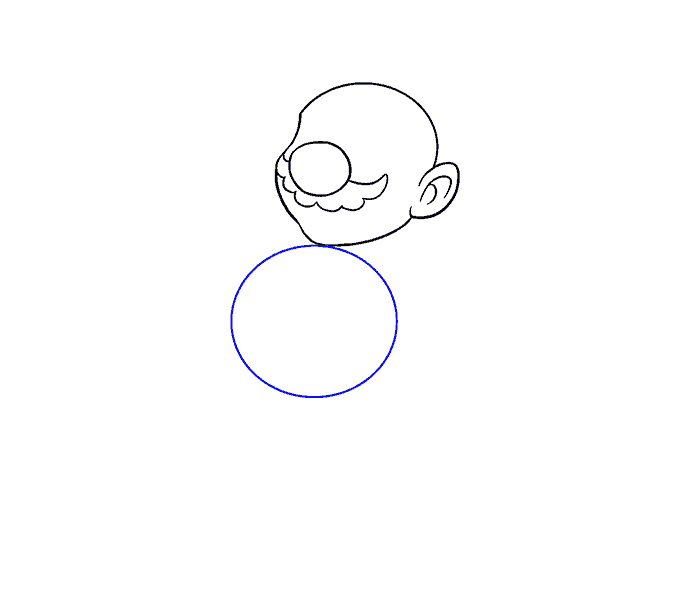 Below the chin, draw a large circle. This will form Mario's body. 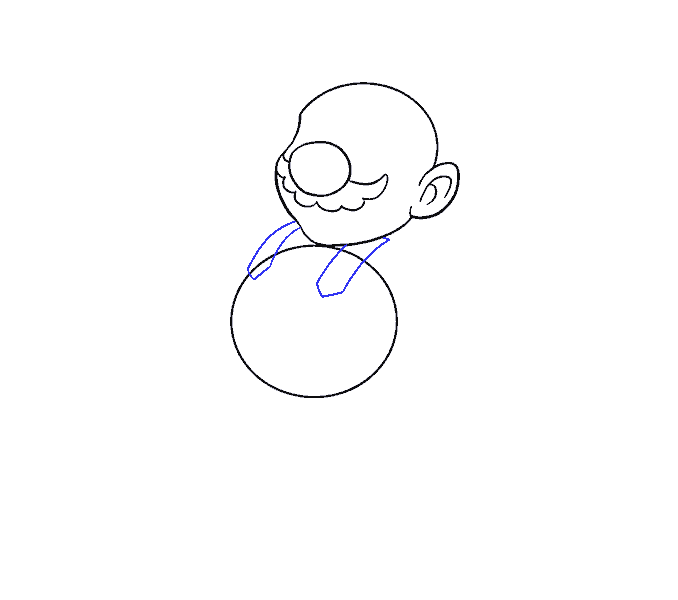 From the neck to the circle, draw two sets of parallel, curved lines. Connect each set by drawing two short, straight lines, meeting at a point. You have just drawn Mario's suspenders. 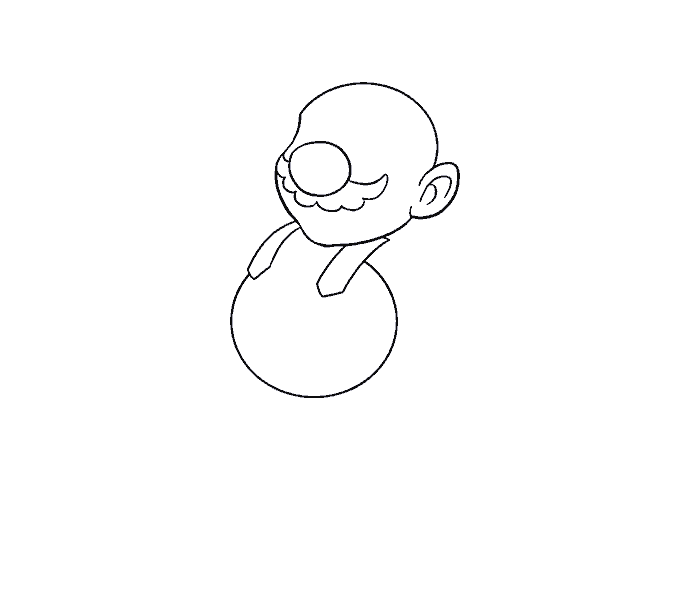 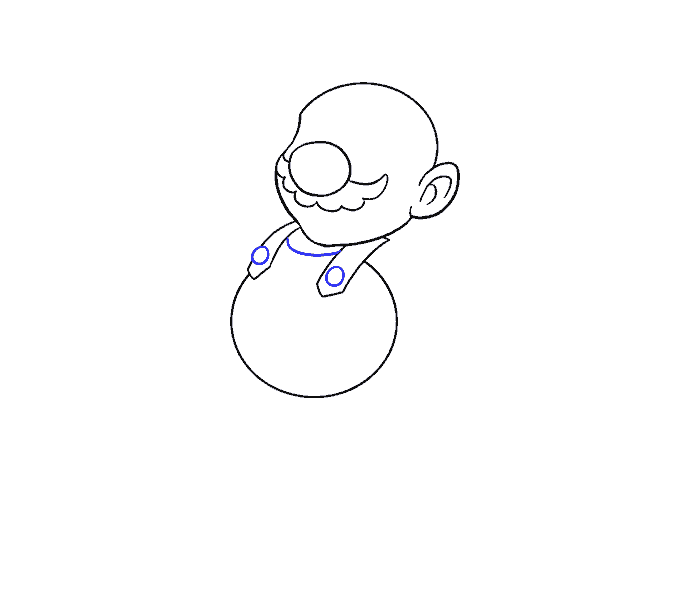 Draw a curved line connecting the suspenders, and a small circle for the button at the end of each suspender. 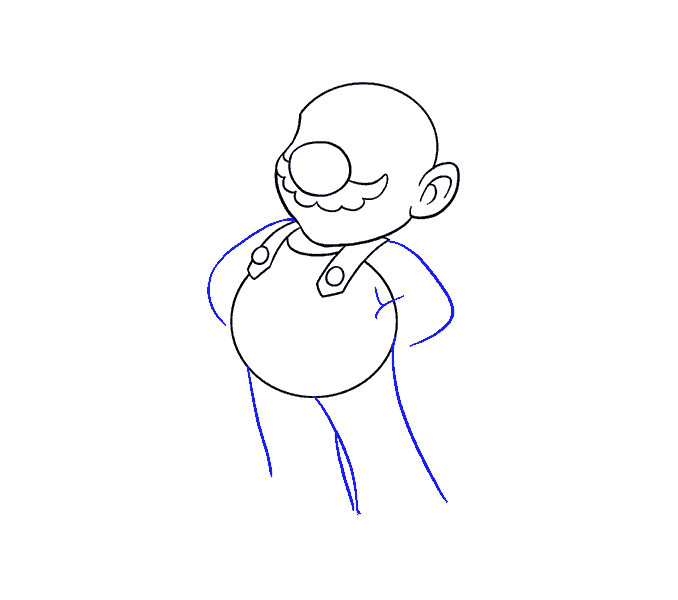 Draw Mario's arms and legs. On the left side, draw a curved line extending from the neck to the middle of the side. On the right, draw a similar line. Then, draw two short, connected curved lines to form the elbow. Draw two sets of parallel, curved lines extending downward. 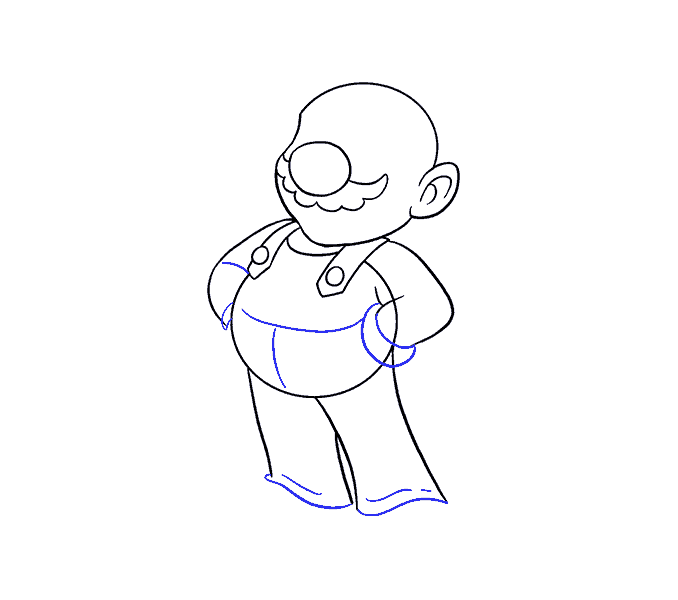 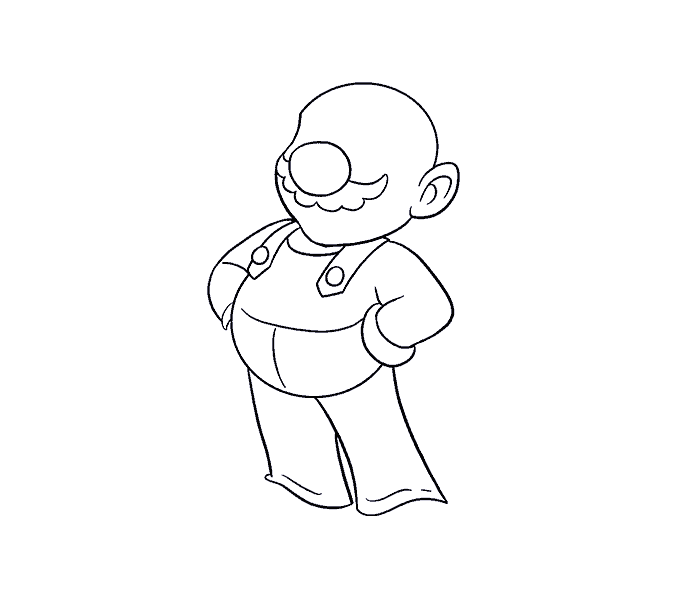 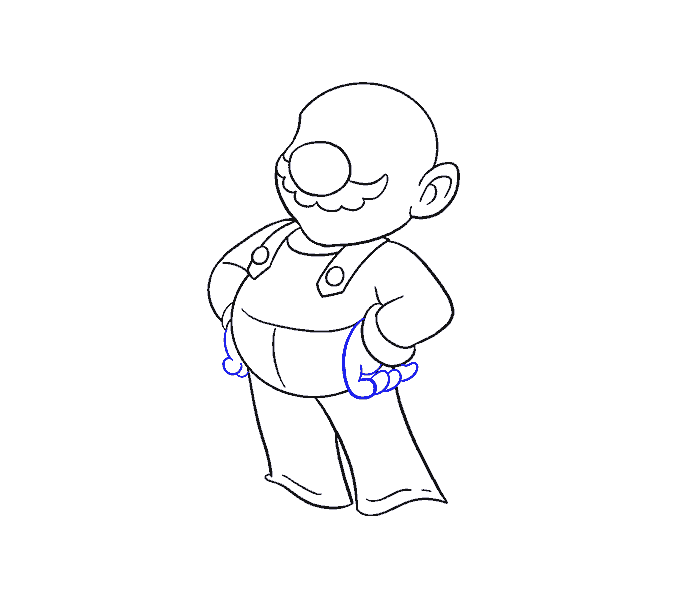 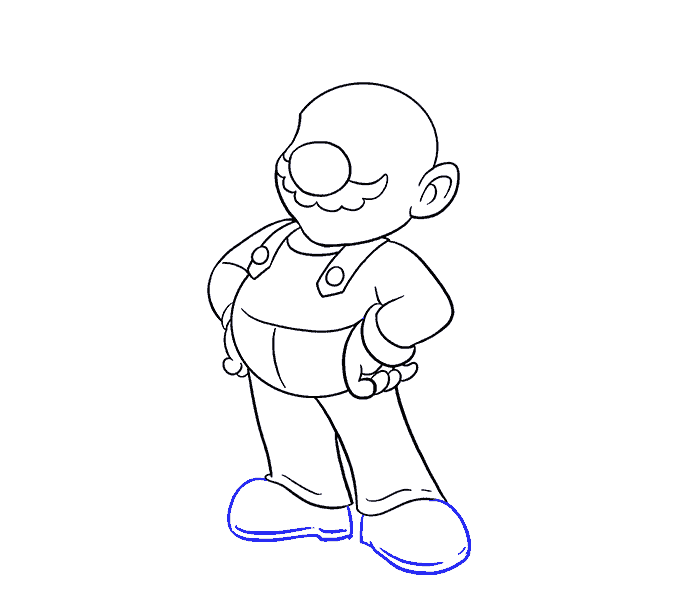 Draw Mario's shoes. Use a long, curved line to outline the shoes, squaring the heel. Detail the soles of the shoes by drawing curved lines parallel to the shoe bottoms. 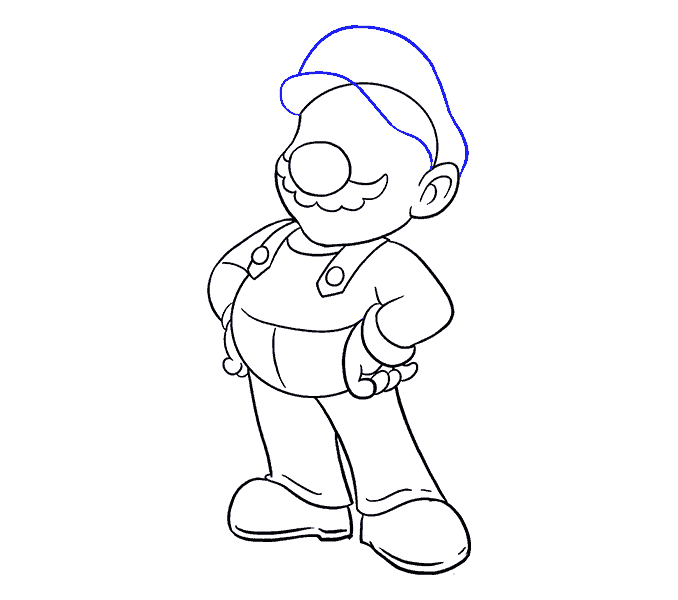 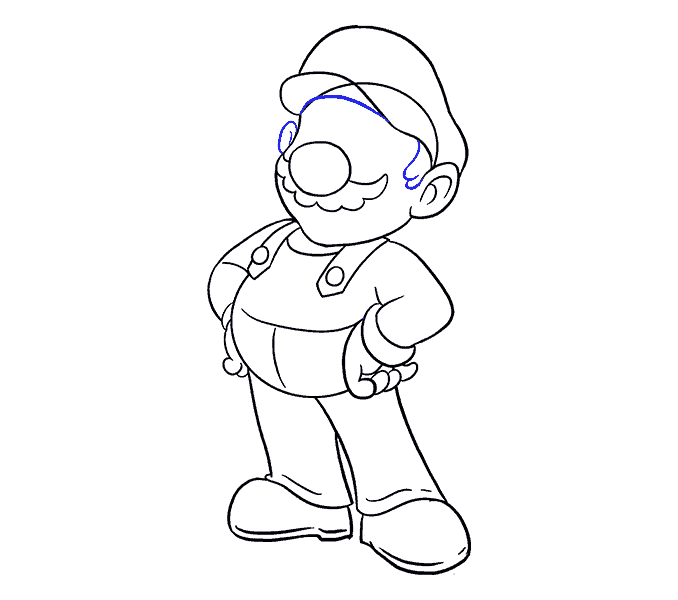 Draw Mario's other ear by enclosing an oval, using a curved line. Add detail to the ear by drawing a small, curved line. Draw another curved line to enclose the brim of the hat, and several short, curved lines to indicate hair near the first ear. 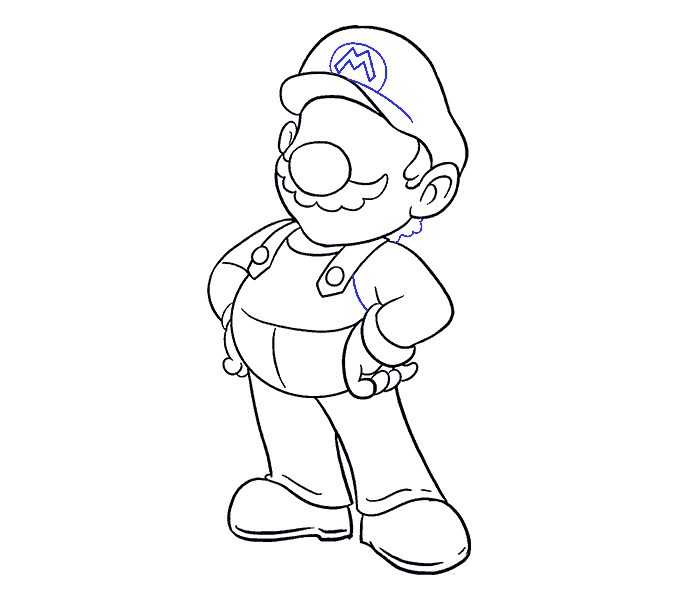 Draw a curved line from the brim of the hat, and enclose a circular shape above the line. Within the circle, draw the letter "M" for Mario. Draw some more hair at the back of the head using a wavy line, and connect the suspender to the hand using a short, curved line. 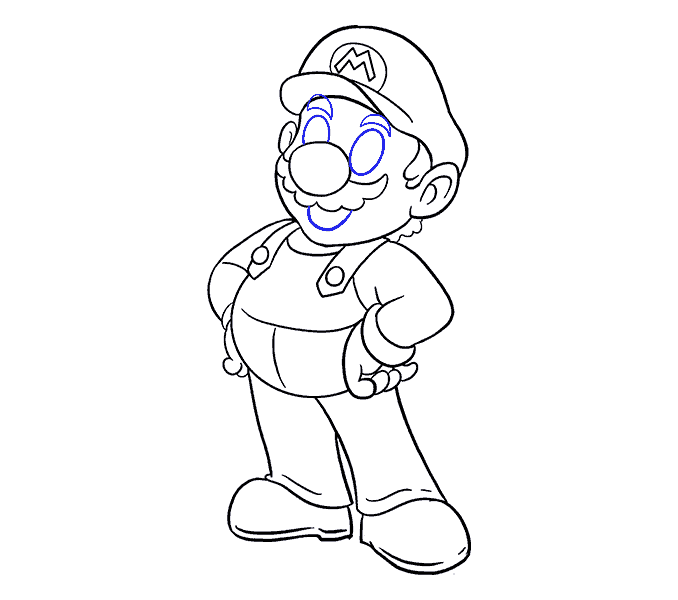 Draw a "U" shaped line beneath the mustache to form the mouth. Draw oval shapes for the eyes, and a curved shape above each to indicate eyebrows. 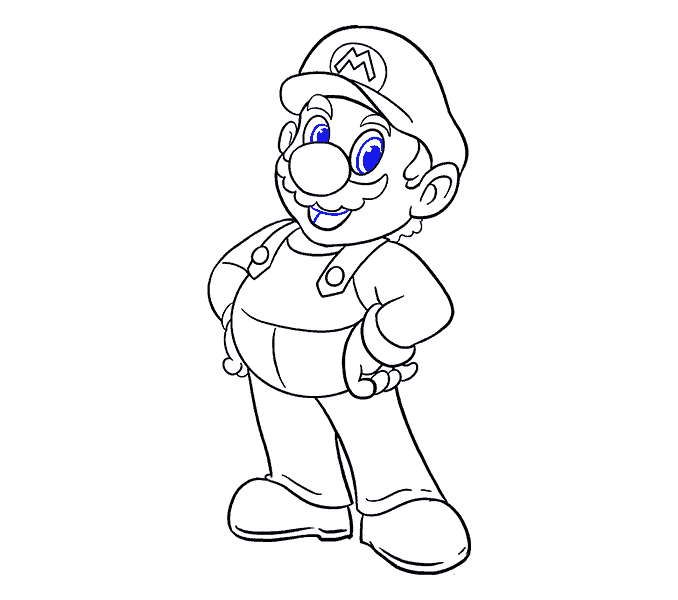 Use curved lines within the mouth to indicate tongue and teeth. Draw an oval within an oval in each eye, shading the smaller. 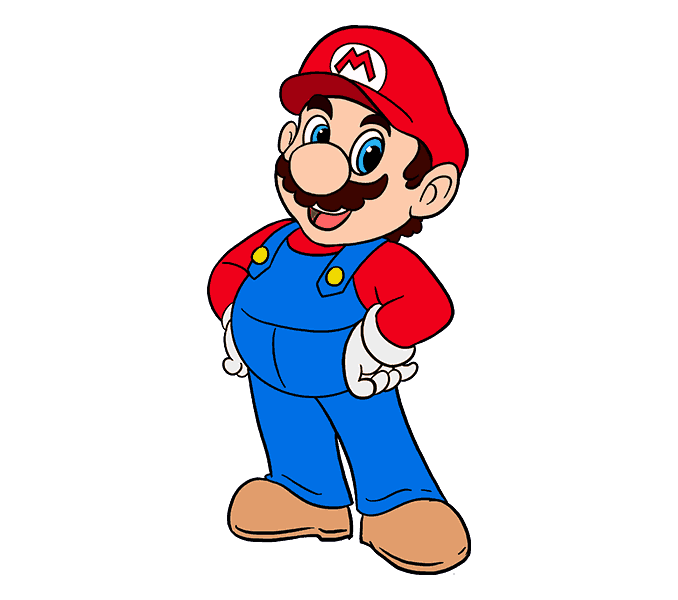