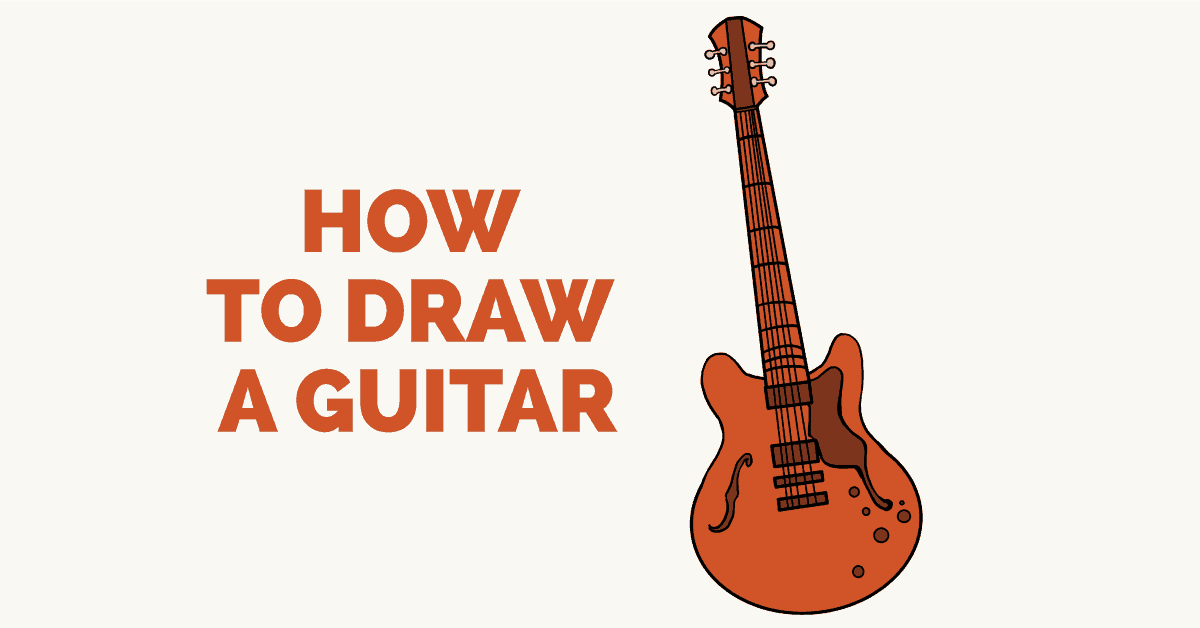 In this really easy drawing tutorial you will learn to draw a simple guitar.

While the guitar is on the cutting edge of the entertainment industry - no rock star could perform without it - this instrument is actually very ancient. Its predecessors, the lute, lyre, bowl harp, and tanbur date to over 4,000 years ago.

One ancient tanbur belonged to an Egyptian singer named Har-Mose. It is presumed to be 3,500 years old, and it was found in the tomb in which Har-Mose was buried. Today, this guitar-like instrument is on display at the Archaeological Museum in Cairo, Egypt. Such instruments are shown in paintings and carvings in places around the world.

Over time, these instruments of antiquity changed, little by little - for example, growing to include six strings instead of four. By the 16th century, guitars looked very much like they do today. The instrument continues to evolve, however - many modern musicians use steel-stringed electric guitars.

Would you like to draw your very own guitar? Doing so is easier than ever with the help of this simple, step-by-step guitar drawing tutorial. Do you have a pencil and a piece of paper? That's all you'll need to begin drawing your guitar. You may also want to have an eraser handy, as some early lines, called guide lines, will need to be removed from your drawing. Finally, do you have colored pencils, crayons, markers, or paints? Use these tools to shade your finished guitar.

Step-by-Step Instructions for Drawing a Guitar

1. Begin by drawing a small circle and a large oval, allowing the shapes to overlap. These shapes outline the body of the guitar.

3. Erase the guide lines left by the original circle and oval. You now have a clean outline of the guitar body.

4. Draw a series of rectangles down the center of the guitar body. These will form the base of the guitar neck, the sound hole, and the bridge to which the strings attach.

How to Draw a Microphone

6. Use a series of straight and curved lines to enclose a nearly rectangular, yet concave, shape at the top of the guitar's neck. This portion of the guitar is called the headstock.

8. Draw the strings by extending straight lines from the headstock to the bridge - from the top of the guitar's neck to the lowest rectangle.

9. Detail the head stock with a pair of lines. Extend short, curved lines from each side of the headstock, allowing them to enclose an hourglass shape. These are the tuning pegs or keys, which tighten the strings on a real guitar. Draw several horizontal lines across the guitar neck. These are called frets, metal ridges against which the guitarist presses the strings to change the notes. Guitars may have between twelve and twenty-four frets. Finally, add a little more detail to the soundboard by drawing a number of decorative circles.

10. Color your guitar. Our example shows a classic brown acoustic guitar, but guitars come in many, many colors. Be creative and dream big dreams of being a rock star or a country music legend!

The Complete Guitar Drawing Tutorial in One Image

How to draw: Guitar - all drawing steps