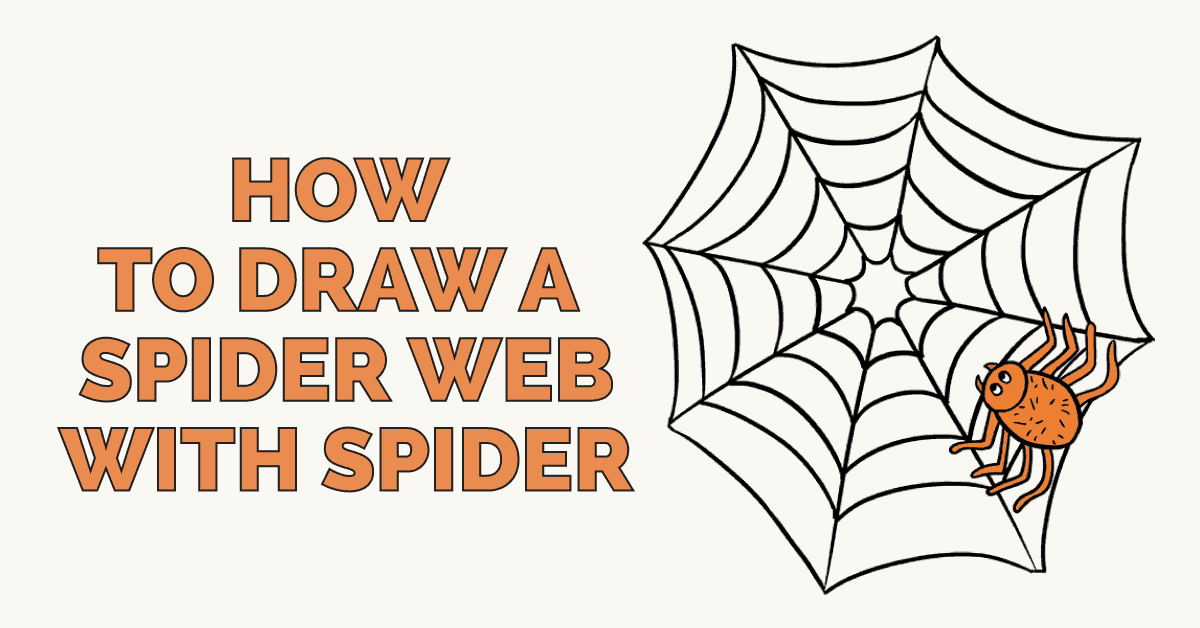 It has been estimated that anywhere on earth, you are never more than three feet away from a spider. These small creatures play a vital role in keeping the populations of pesky insects in check. All spiders have a poisonous bite, but only a few pose a serious threat to humans.

Large, round spider webs are a common sight throughout most of the world. These webs are typically generated by the 169 species of orb weaver spiders. The spiders use the webs to catch their insect prey. The webs are made from several types of fiber produced by the spider. One type of webbing is very strong and provides support for the web. Another type is sticky. The spider must therefore remember where she placed the sticky strands on her web so that she does not become trapped herself!

Would you like to draw your very own spider on its web? Doing so is easy with the help of this simple, step-by-step drawing tutorial. You will need only a pencil and a sheet of paper. You may also want to have an eraser handy. In each step of this drawing guide, newly added lines are highlighted in blue, while previously drawn lines fade to black.

Do you have crayons, colored pencils, markers, or paints available? Use them to color your spider. Though generally depicted as brown or black, spiders come in a wide variety of colors.

Crab spiders are often brightly colored, with bodies and legs of white, red, or yellow. A type of orb weaver spider called the writing spider has a white head and black and yellow zebra stripes on its body. The lynx spider is bright green, and the Hawaiian happy face spider is yellow with black, white, and red spots that make it look like an emoticon or emoji.

Are your spider senses tingling? If so, get to work on this spider web cartoon.

If you liked this tutorial, see also the following drawing guides: Spider, Bee, and Spiderman Logo.

Step-by-Step Instructions for Drawing a Spider Web with Spider 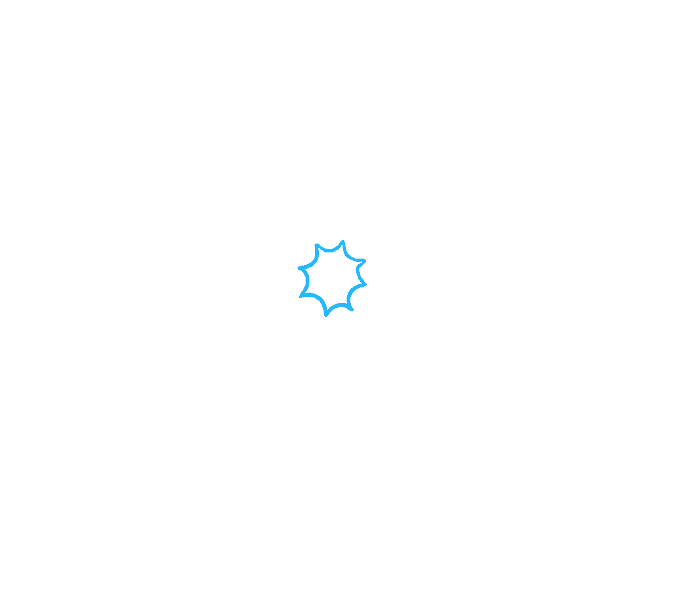 Begin by using curved lines to draw a many-pointed star shape. This shape will form the center of the spider web. 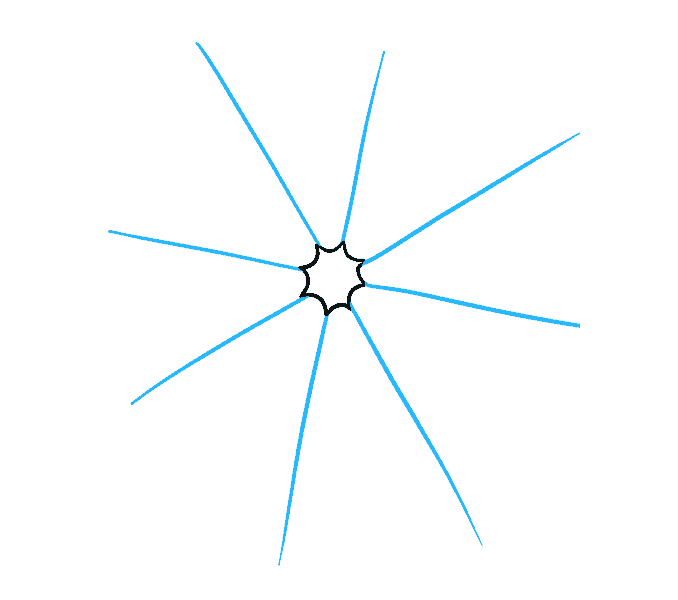 From each point of the star shape, extend a long, straight line. These lines are the "spokes" of the spider web, similar to the spokes of a bicycle wheel. 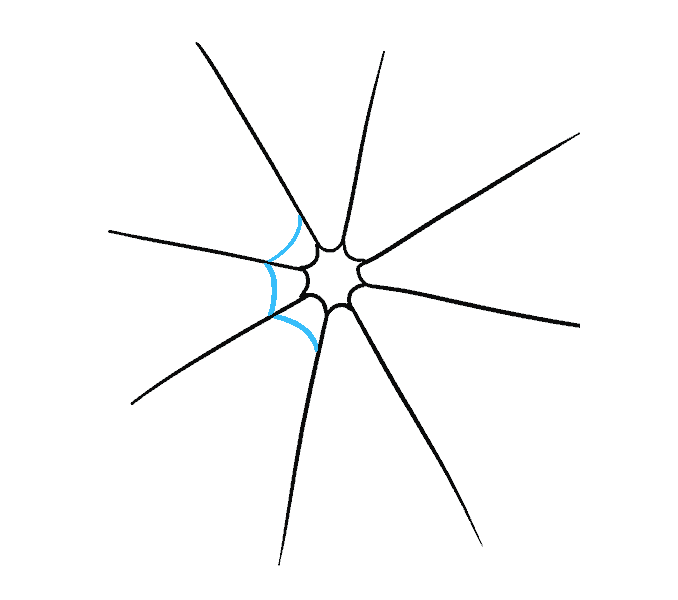 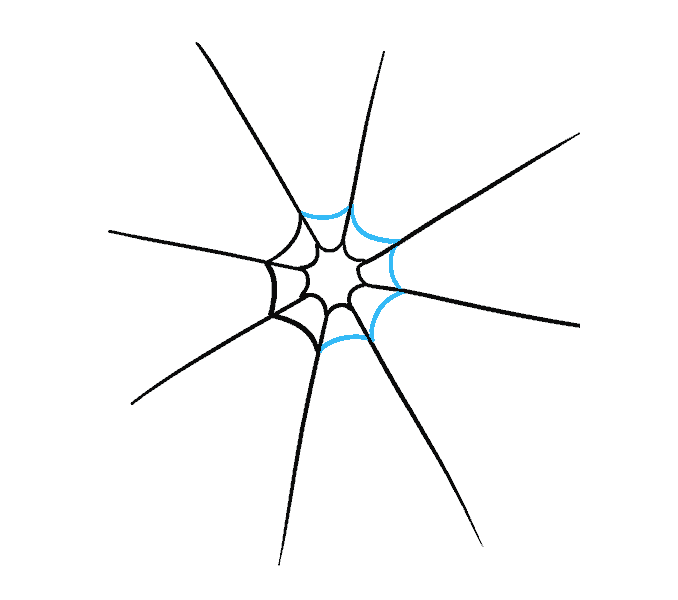 Continue this process until you have enclosed a larger star shape around the central shape. 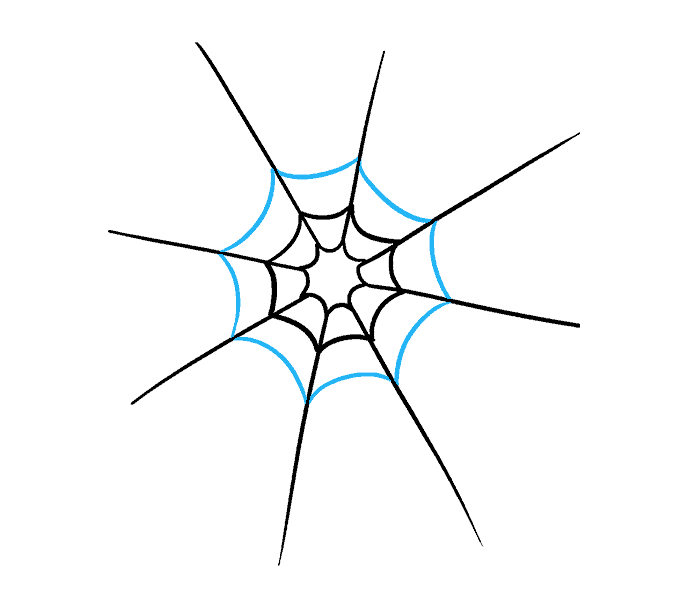 Moving outward along the spokes, continue the process of connecting one spoke to another using a curved line. When finished, you will have enclosed a third star shape around the previous two. 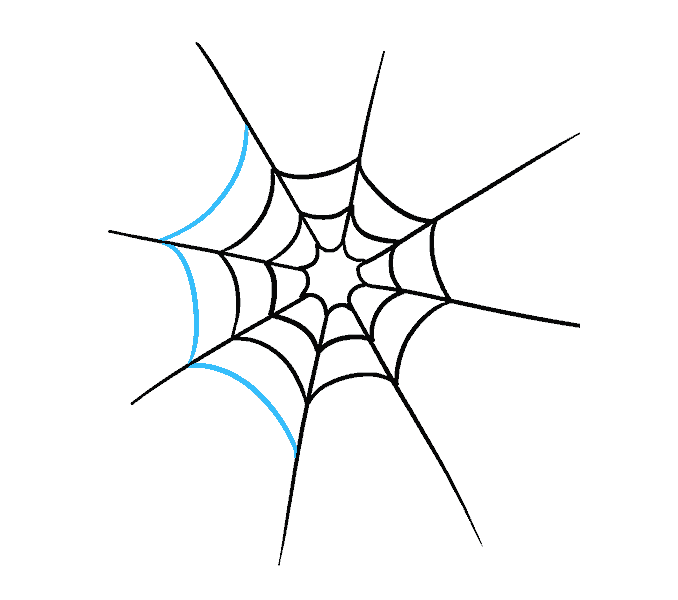 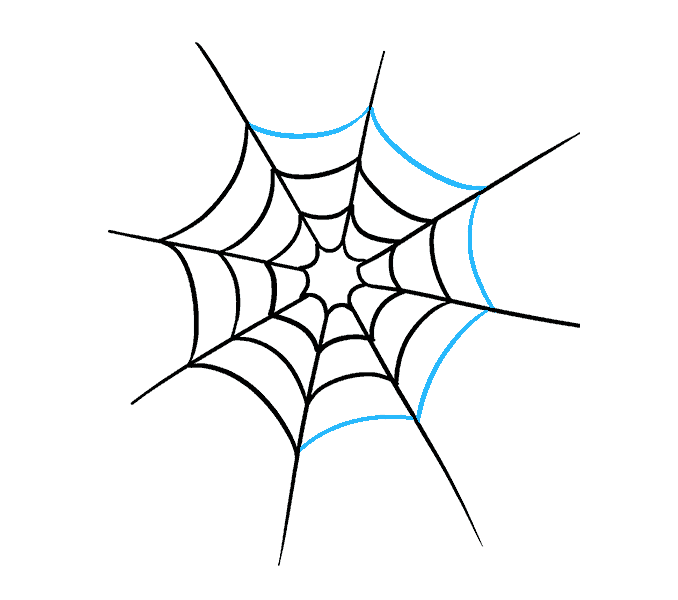 Continue connecting the spokes using curved lines until you have enclosed a fourth star shape around the previous shapes. 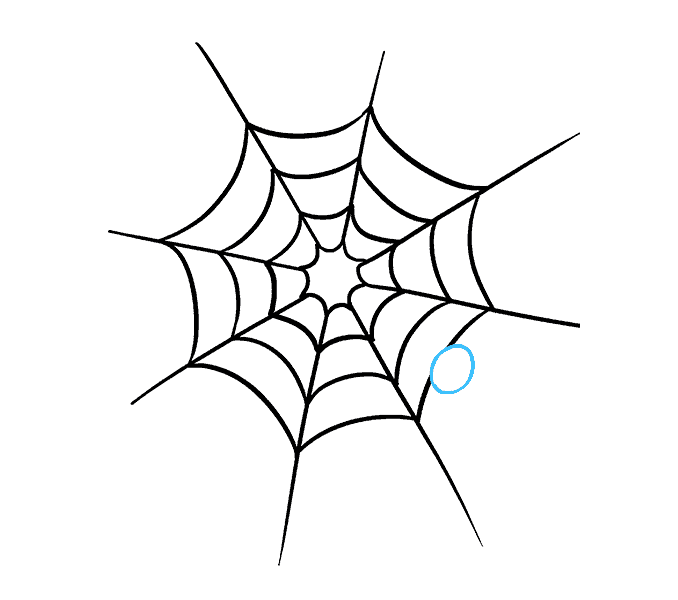 On one of the outermost curved lines, draw an oval. Thus begins your spider. 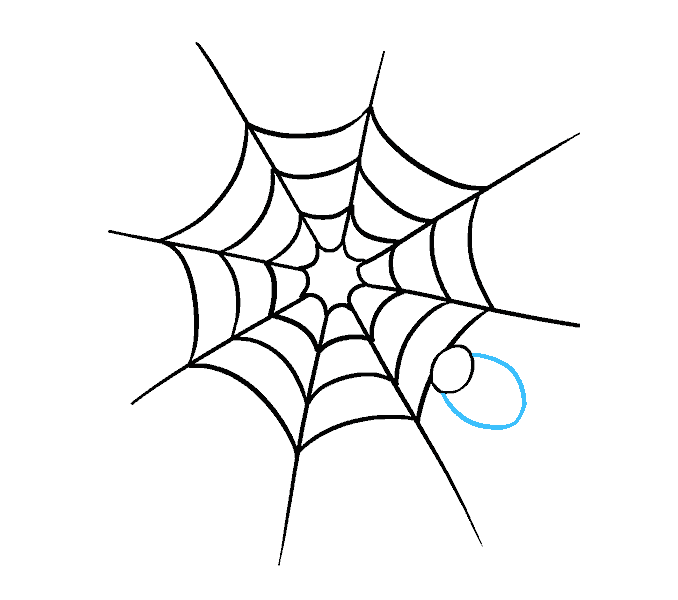 Enclose another, larger oval shape extending from the first. This forms the body of the spider. 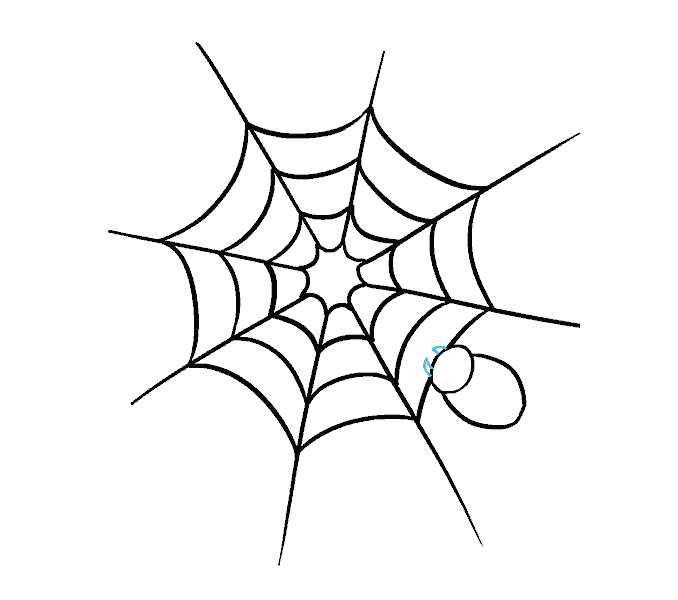 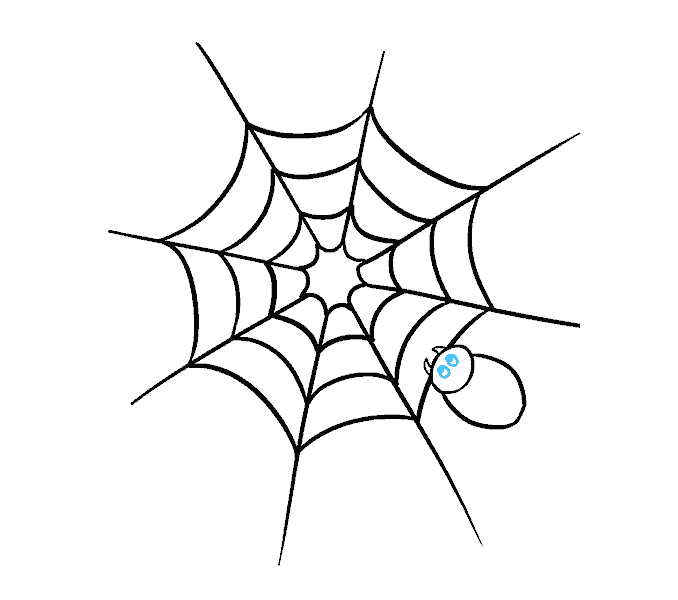 Draw the spider's eyes, beginning with two ovals on the spider's head. Draw a circle within each oval, and shade the circle. 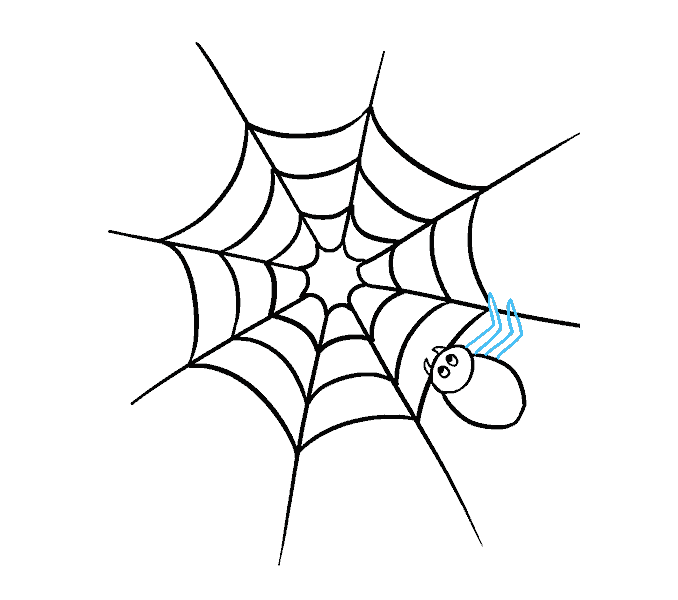 Draw the spider's legs. Extend two sets of parallel lines from one side of the spider. At the end of each set, extend two more lines at an angle, allowing the lines to meet in a sharp point. 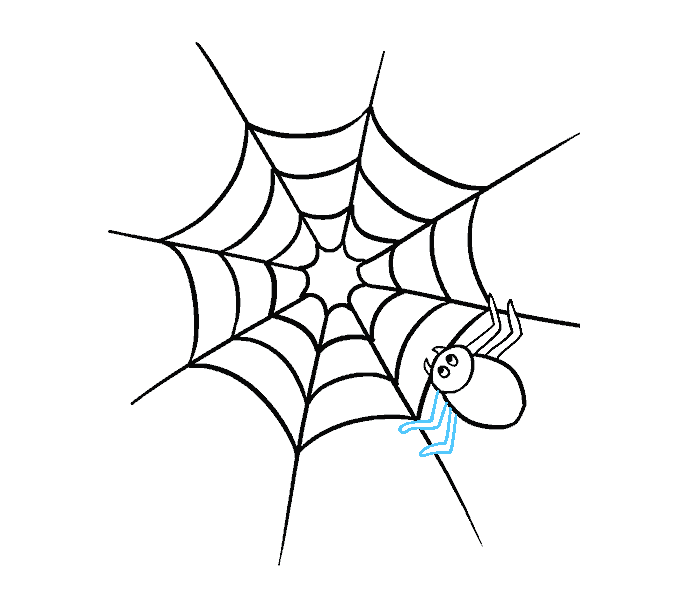 Repeat this process on the opposite side, drawing two more legs. 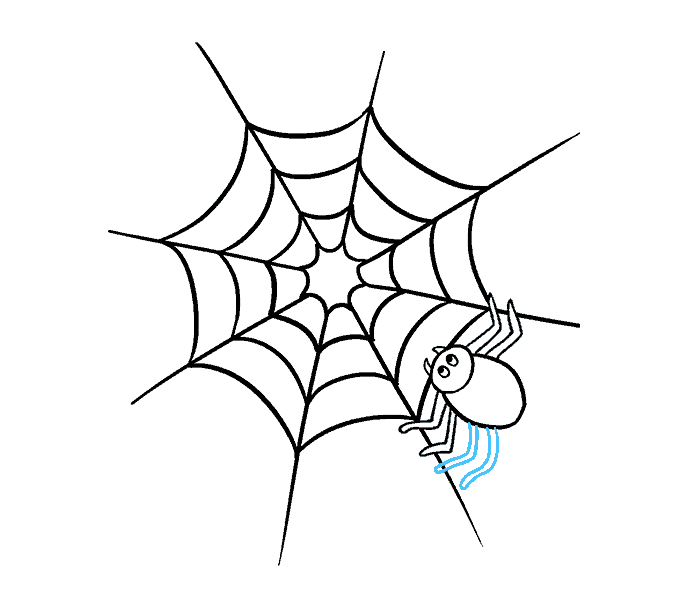 Extend two more legs from the body of the spider, in a similar manner to the previous legs. 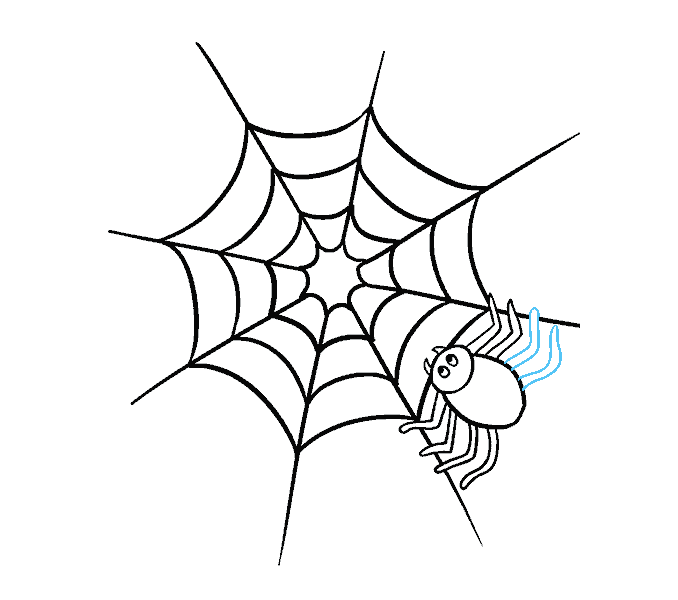 Repeat on the opposite side to form a mirror image. Your spider should now be equipped with eight legs. 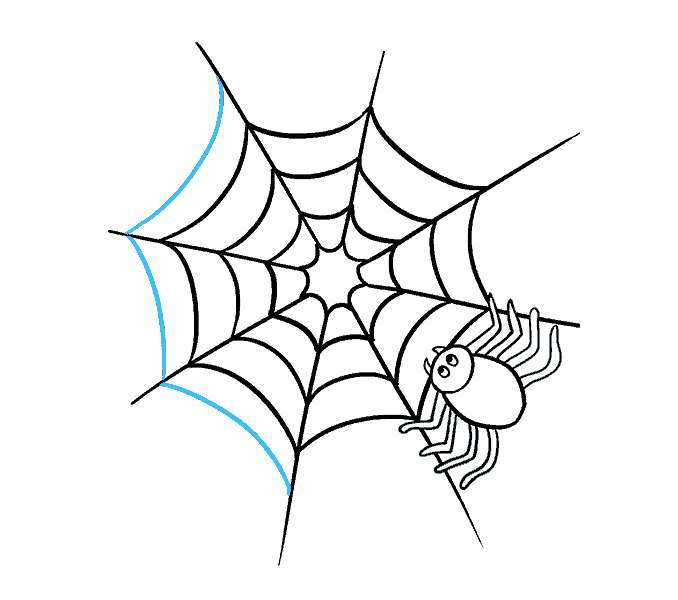 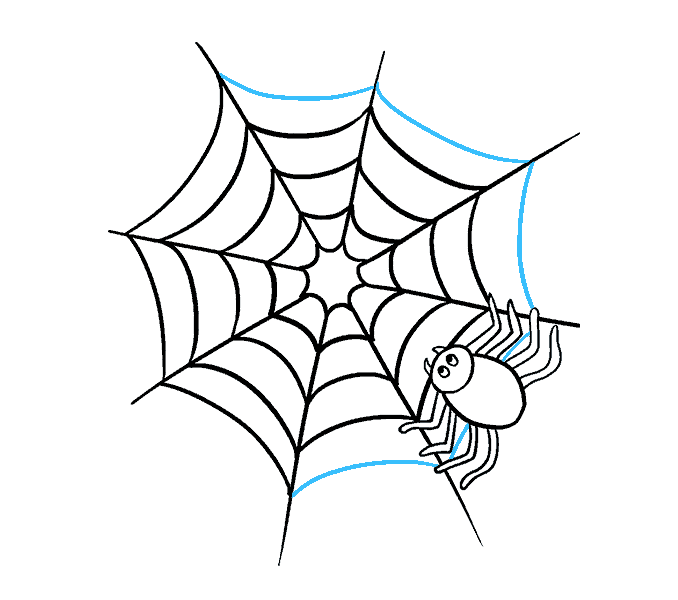 Continue connecting the spokes using curved lines until you have enclosed another star shape about the web. 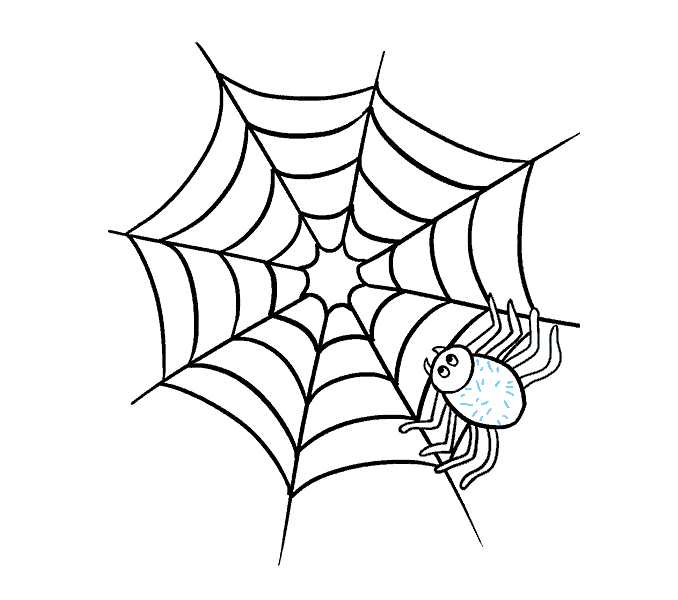 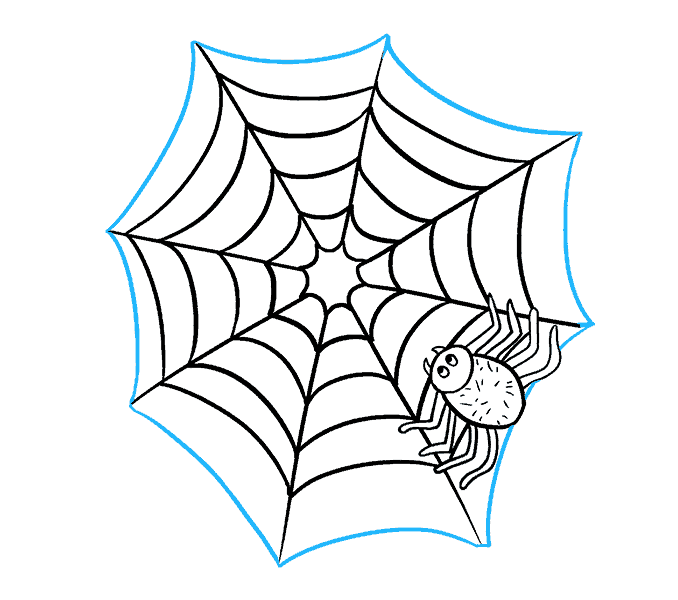 Connect the tips of the spokes, one to the other, using long, curved lines. Continue until you have enclosed a final star shape around the outside of the web. 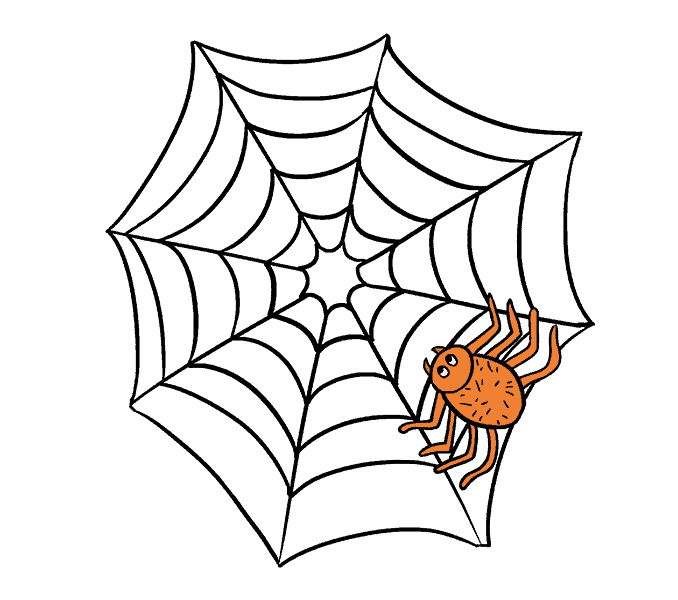