Camping is a "recreational activity in which participants take up temporary residence in the outdoors." Camping first took a recreational turn around 1908, with the publication of The Camper's Handbook.

Prior to this time, nomadic life in tents was a lifestyle necessity rather than a type of vacation. Throughout history, various peoples have resided in tents. Tents, in turn, have been used for "a wide variety of purposes, including recreation, exploration, military encampment, and public gatherings such as circuses, religious services, theatrical performances, and exhibitions of plants or livestock."

A modern camping trend is known as "glamping." Glampers like to bring all the comforts of home when they go camping. This often includes personalizing their campers and bringing amenities like cable television sets.

Camping is included in the storyline of many elements of popular culture. During the 1980s and 1990s, the theme of "summer camp" was common in entertainment. Examples include the Nickelodeon comedy series Salute your Shorts and the film Ernest Goes to Camp. The Animal Crossing video game franchise has more recently brought camping into the limelight.

Would you like to draw a cartoon camping scene? This easy, step-by-step cartoon drawing tutorial is here to show you how. All you will need is a pen, pencil, or marker and a sheet of paper. You may also wish to color your finished drawing.

If you liked this tutorial, see also the following drawing guides: Tent, Cartoon Forest, and Lake.

1. Begin drawing your tent. Use five curved lines of various lengths to enclose an irregular pentagon. Then, draw a curved line passing behind the tent to indicate the horizon line.

2. Detail the tent. Draw a curved line between two of the corners, outlining the front of the tent. Draw a narrow curved triangle to indicate the opening. Then, use curved lines to enclose a rounded triangle shape on each side of the opening. Draw a circle on each to indicate the button that holds the flaps open. Draw a curved line from each of the corners of the tent to form the ropes that hold it in place. Enclose the rounded "L" shape of a tent pin at the end of one rope.

3. Enclose a chain of irregular rounded shapes, forming the stones that contain the campfire.

7. Use curved lines to sketch more pin trees in the distance, behind the tent.

How to Draw a Hibiscus 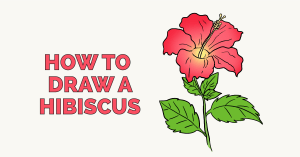 8. Use curved lines to sketch two triangular mountains on the horizon.

9. Draw clouds around the mountains, using connected "U" shaped lines. Draw more clouds in the same manner, but with flat lines at their bases, above the mountains. Draw curved "V" shaped lines to indicate the silhouettes of birds in flight.

Color your cartoon camping scene. Will it be at sunrise, with a clear blue sky, or starry night? The choice is yours.

Then, pick your campers and friendly woodland creatures.

The Complete Camping Scene Drawing Tutorial in One Image

How to draw: Camping Scene - all drawing steps