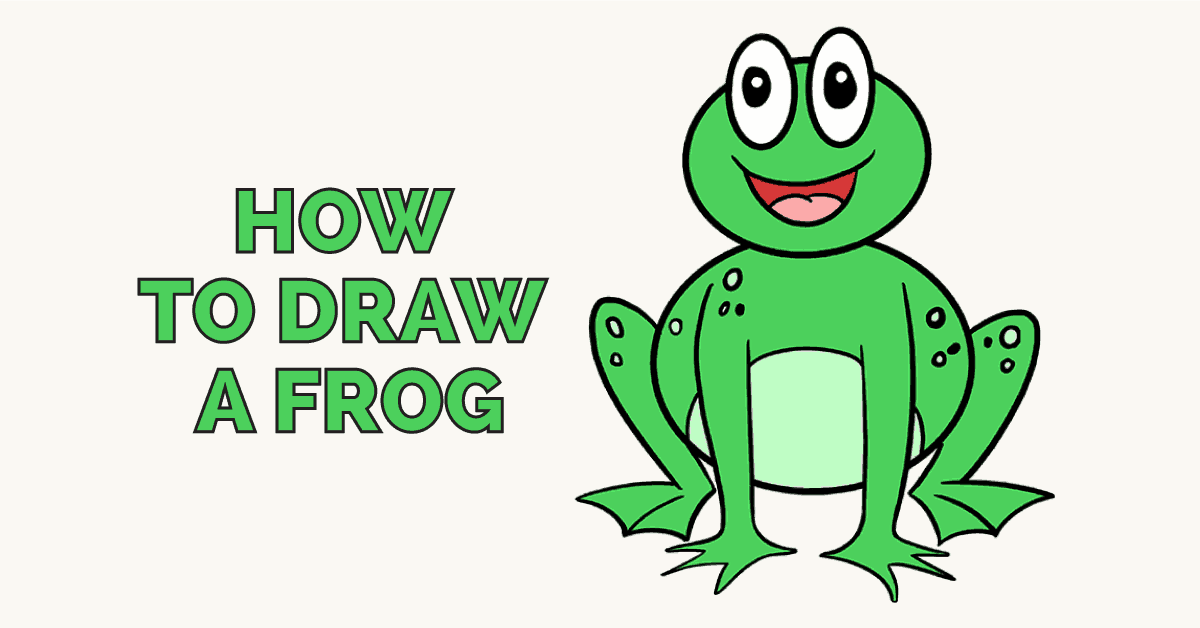 In this really easy drawing tutorial you will learn to draw a simple Frog.

Frogs and toads hold a sometimes confusing place in the animal kingdom. Some people think they are reptiles, like snakes, lizards, and turtles, but they are not. They are actually amphibians, which means they have slimy skin with no scales, lay eggs, and spend much of their time in the water.

Sometimes, young frogs are even confused with fish. Why? Because frogs lay their soft, squishy eggs in lakes, ponds, or even water caught in puddles or large leaves. When the young frogs - called tadpoles - hatch from their eggs, they look nothing like their parents. They have no legs, but rather a long tail for swimming. As they grow, tiny legs become visible, and eventually the tail disappears.

Kermit the Frog is one of the most famous frogs ever drawn. He was created in 1955 by puppeteer Jim Henson for such television shows as Sesame Street and The Muppet Show.

Would you like to draw your very own frog? Doing so is easier than ever with this simple, step-by-step drawing tutorial. All you will need is a pencil and a piece of paper. You will need to remove some lines as you go along, so have an eraser handy. What color will you make your frog? Use any tools you like - colored pencils, paints, markers, or crayons - to shade your completed frog drawing.

Are you ready? If so, get hopping and draw your frog!

If you liked this tutorial, see also the following drawing guides: Cartoon Fish, Nemo, and Whale.

Step-by-Step Instructions for Drawing a Frog

1. Draw an oval. This will form the frog's head.

2. Draw another, slightly larger oval, below and overlapping the first. This will form the frog's body.

3. Draw a pair of curved lines extending from the oval that forms the body. These lines make the frog's foreleg. At the bottom of the leg, draw a number of short, curved lines, connected at sharp points. Each point forms one of the frog's toes.

4. Repeat this process to draw the other foreleg. Begin by extending a pair of curved lines from the body, and draw short lines meeting at sharp points at the bottom of the leg to form the toes.

5. Erase the guide lines formed by the oval from the legs.

6. Begin the rear legs by drawing a long, curved line on each side of the oval. Then, draw short, curved lines extending from the bottom of the oval to form the other side of each leg.

7. Extend a pair of curved lines at an angle from the bottom of each leg. Enclose the shape of the foot using two curved lines that meet in the middle at a blunt point.

9. Add detail to each eye. First, draw a circle within each eye. Then, draw a smaller circle within the first. Shade between the two circles. Draw a pair of overlapping, curved lines inside the mouth to enclose the tongue. Enclose a circular shape behind the forelegs using several curved lines. Detail the rear feet by drawing a curved line down the middle of each. Finally, draw circles of various sizes on the knees and body to give your frog spots.

10. Color your frog. In our example, the frog is green, but real frogs come in many different colors - yellow, orange, red, blue, and black, to name a few. Be creative!

The Complete Frog Drawing Tutorial in One Image

How to draw: Frog - all drawing steps