Learn how to draw a great looking Hood with easy, step-by-step drawing instructions, and video tutorial. You can now easily create a beautiful Hood drawing. 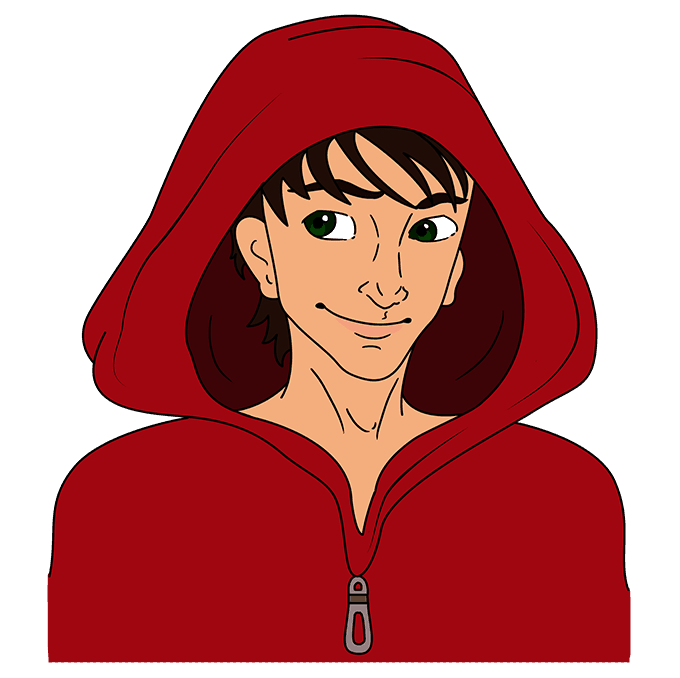 "Hey there Little Red Riding Hood,
You sure are looking good.
You're everything a big bad wolf could want."
- "Lil' Red Ridin' Hood," song by Sam the Sham

Little Red Riding Hood, named after her hooded garment, is perhaps the most iconic use of the hood in popular culture. The story originated as a fairy tale in Europe around the tenth century. Hoods were, at that time, usually a part of a cloak or cape. These were common items of clothing used to keep off the rain and the winter chill.

This type of hooded cloak has appeared in a number of modern films, ranging from Disney fairy tales like Tangled and Snow White to the Jedi robes of the Star Wars movie franchise. At the same time, the hood itself has found its place in modern attire. Hooded sweatshirts known as "hoodies" have been produced since the 1930s. Beginning in the 1970s, hoodies became an emblem of hip hop culture and later came to be a wardrobe staple in the United States and across the world.

In fairy tales, malevolent figures such as sorceresses often wear hooded cloaks in order to conceal themselves. Similarly, in some places today, hoodies are associated with armed robbery because they have been employed to conceal identities and weapons.

Would you like to draw a cartoon hood? This easy, step-by-step cartoon drawing tutorial is here to show you how. All you will need is a pencil, a sheet of paper, and an eraser to draw this fairy-tale figure, Jedi knight, or hip hop superstar.

If you liked this tutorial, see also the following drawing guides: Shirt, Jeans, and Cape. 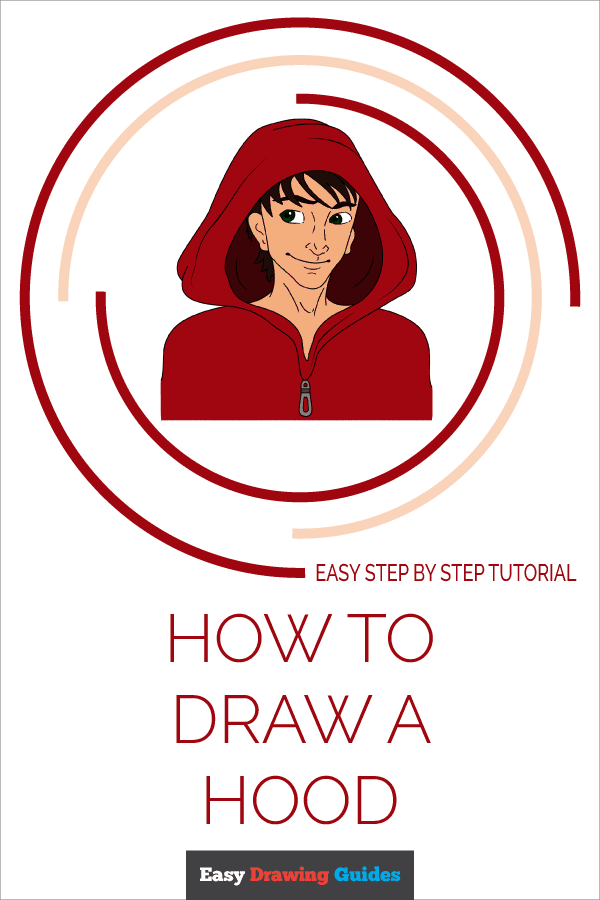 Step-by-Step Instructions for Drawing a Hood 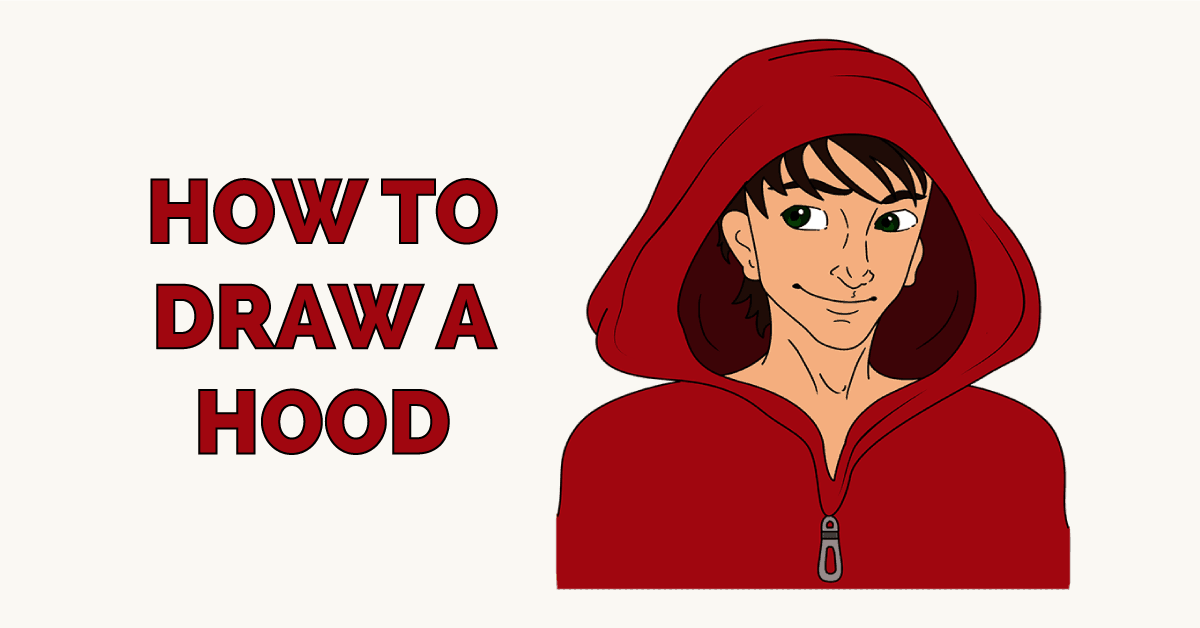 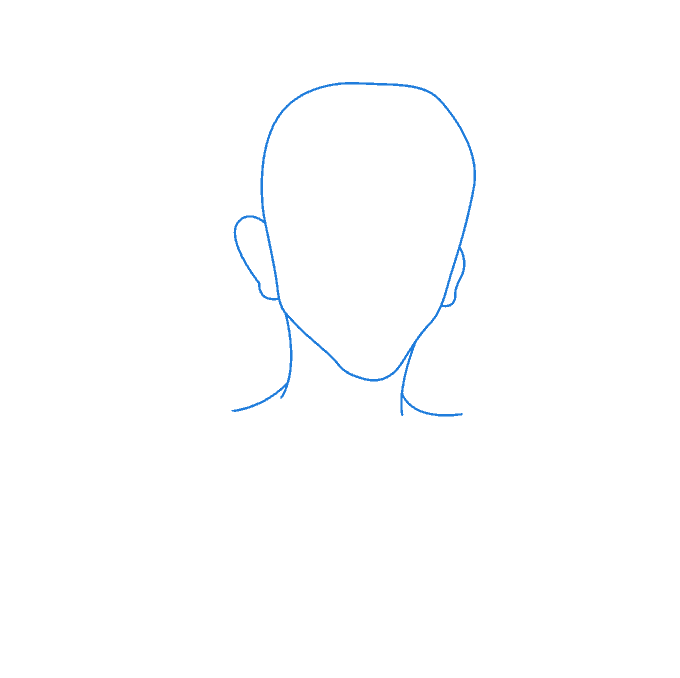 1. Begin by sketching the wearer's head and neck. Use a long, curved line to sketch the irregular rounded shape of the head. Then, use curved lines to enclose the ears on each side. Next, extend a pair of curved lines below the head to form the neck. Finally, draw curved lines overlapping with those of the neck to outline the tops of the shoulders. 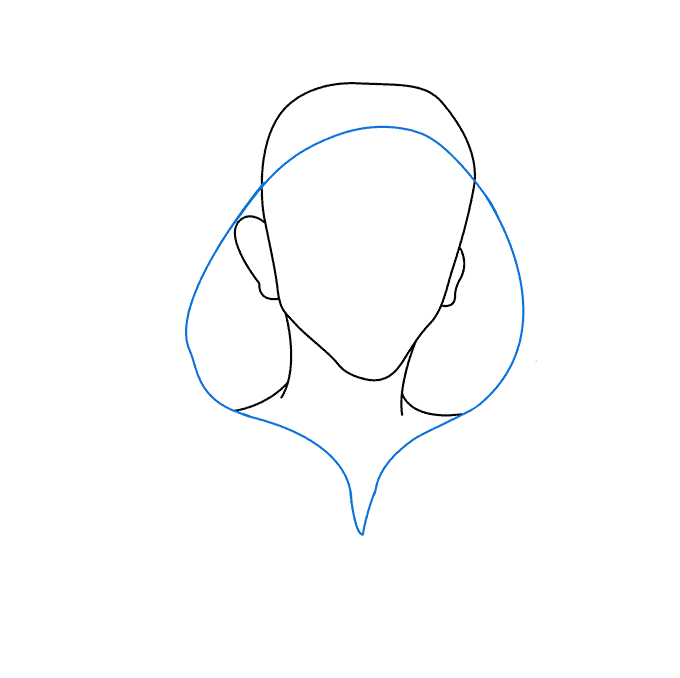 2. Outline the opening of the hood. Use a long, curved line to sketch a roughly inverted teardrop shape, pointed at the bottom. Notice how the hood intersects the top of the head. 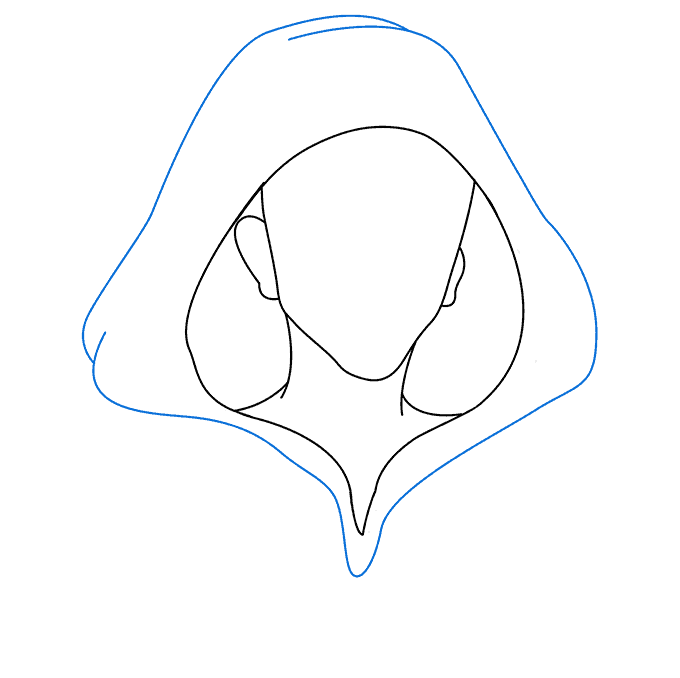 3. Use a series of overlapping curved lines to outline the outside of the hood. These lines should be roughly parallel to the original line. Erase the top of the head, which is now hidden by the hood. 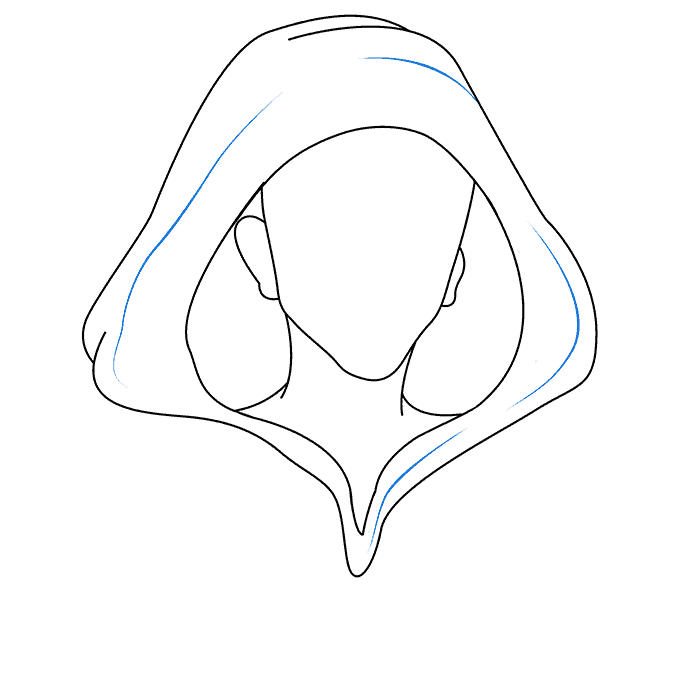 4. Draw long, curved lines across the hood to indicate folds in the fabric. 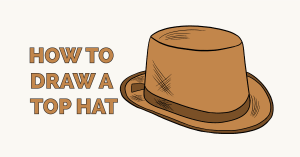 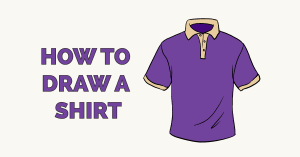 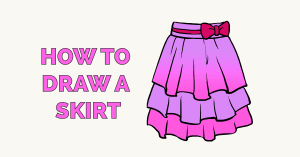 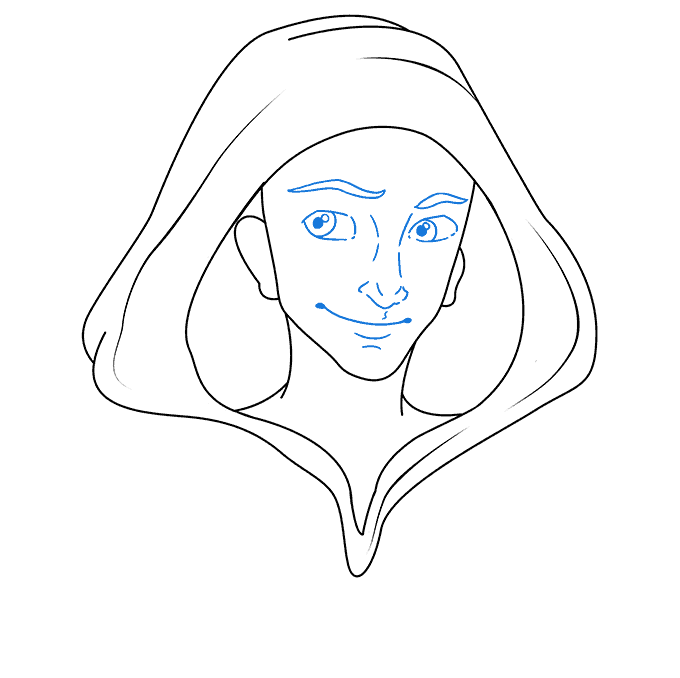 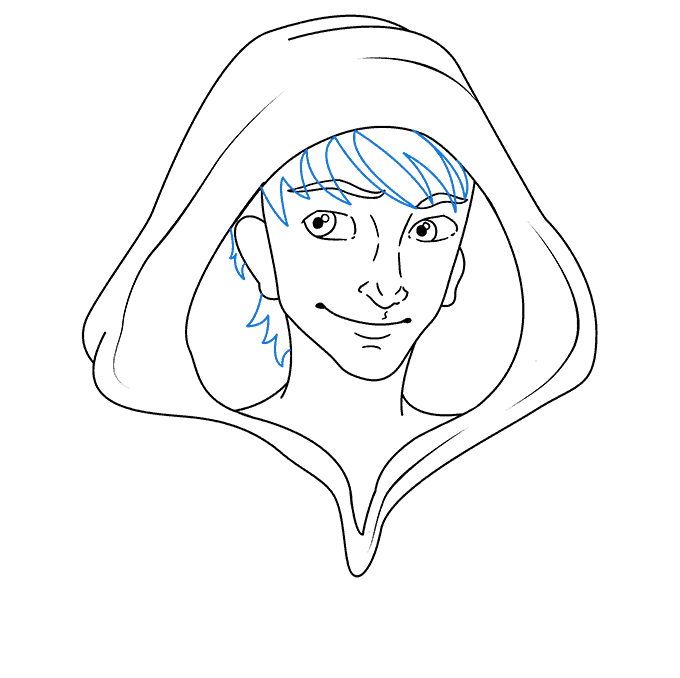 6. Use pairs of curved lines that meet at points to draw the hair at the forehead, behind the ear, and at the back of the neck. 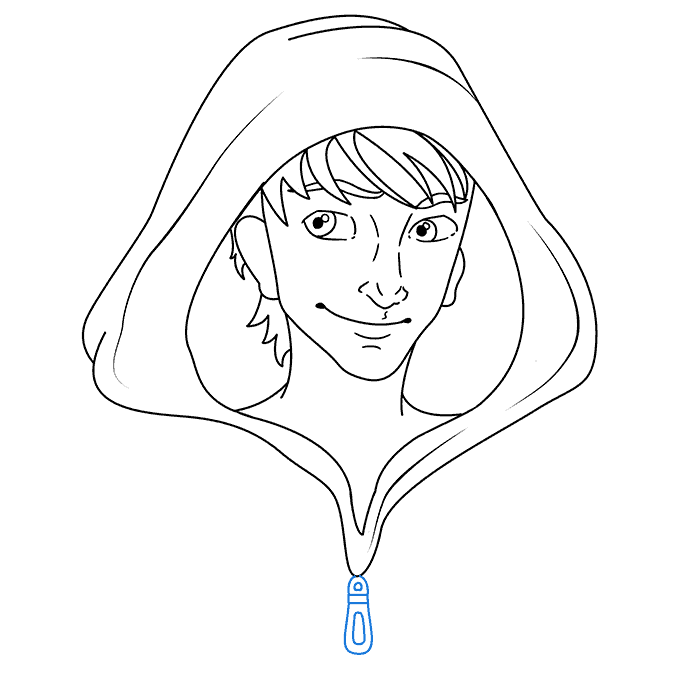 7. Draw a zipper or clasp at the bottom of the hood. First, enclose an elongated, rounded shape, and band it with two horizontal lines. Draw a small circle above the lines and an oval below them. Erase unnecessary lines from the hair.

How to Draw a Spartan Helmet 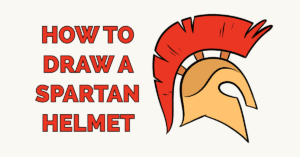 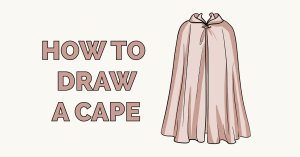 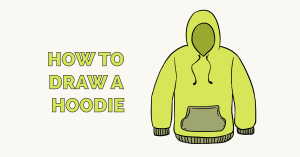 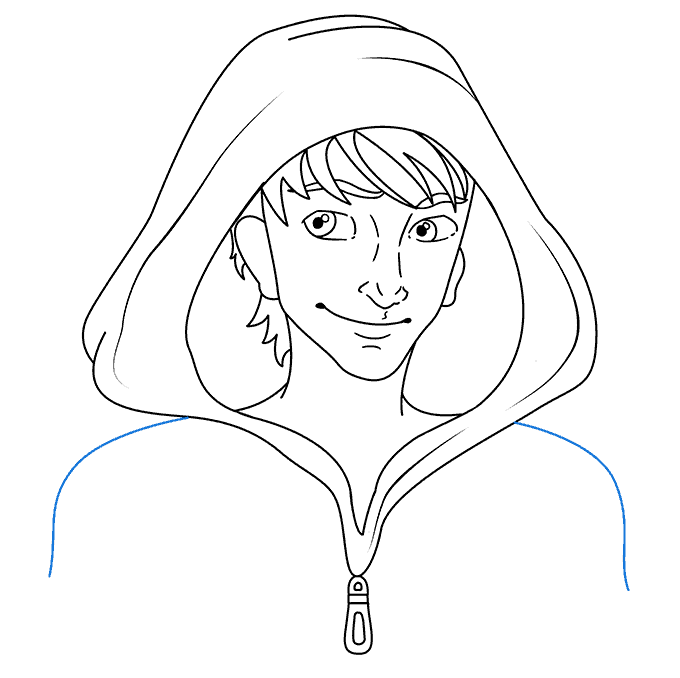 8. Use long, curved lines to sketch the shoulders. 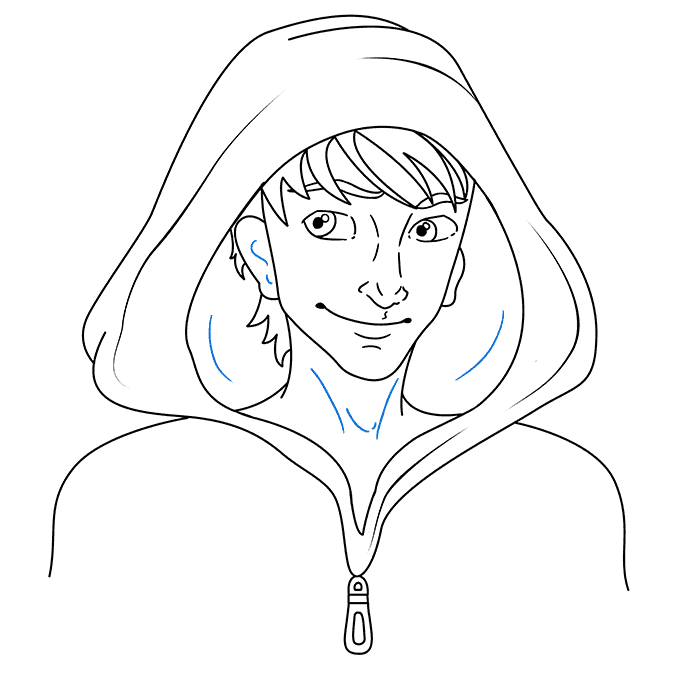 9. Use curved lines to detail the inner ear, the inside of the hood, and the neck.

Are you ready to tell your story? Learn to draw all the characters you need with the aid of our cartoon people drawing guides. 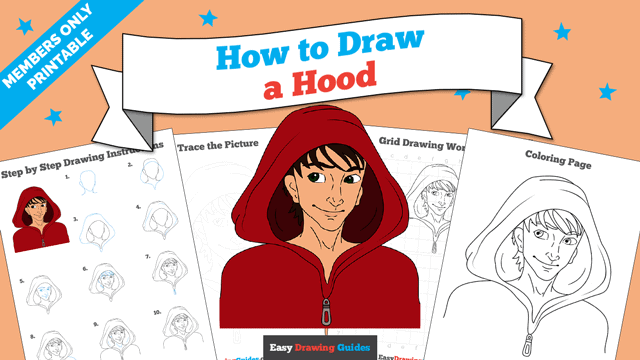