Learn how to draw a great looking Fireworks with easy, step-by-step drawing instructions, and video tutorial, plus FREE printable pages. You can now easily create a beautiful Fireworks drawing. 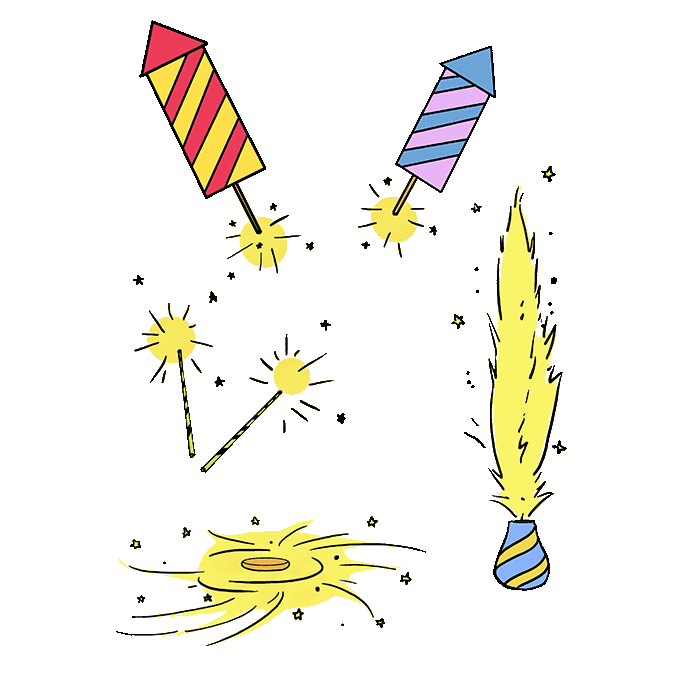 Fireworks are now a common sight during celebrations the world over. Brilliant multicolored light patterns, accompanied by loud pops and booms, ring in the new year, celebrate independence, or mark other important events, such as the birth of a baby. Where do fireworkscome from?

The earliest known fireworks were created in China over one thousand years ago. Chemists combined certain ingredients and discovered gunpowder. They stuffed the powder into bamboo tubes, which made a loud cracking noise when tossed into a fire - the first firecracker.

Such early fireworks were used in religious ceremonies designed to scare off evil spirits, especially at times of birth, marriage, and funerals. Later, fireworks were adapted to be used as bombs in warfare, and eventually the rocket-style firework, the type that is launched into the sky, was invented.

By the thirteenth century, this technology reached Europe, and the earliest recorded fireworks display in England occurred in the 1400s. Kings across Europe used this bright new toy to entertain guests and mark special events.

John Smith, famous for his interactions with Pocahontas, is said to have set off the first fireworks in North America in 1608.

During the 1800s, inventors discovered that they could change the color of the fireworks by adding metals or salts to the gunpowder mixture. This has allowed fireworks to further grip the imagination.

In addition to yearly fireworks displays, fireworks motifs are often used on clothing, accessories, and in decorations and art.

Would you like to draw a vibrant fireworks display? Now you can, with the help of this easy, step-by-step fireworks drawing tutorial. All you will need is a pencil or pen and a sheet of paper. You might also use crayons, colored pencils, or markers to shade your finished artwork. 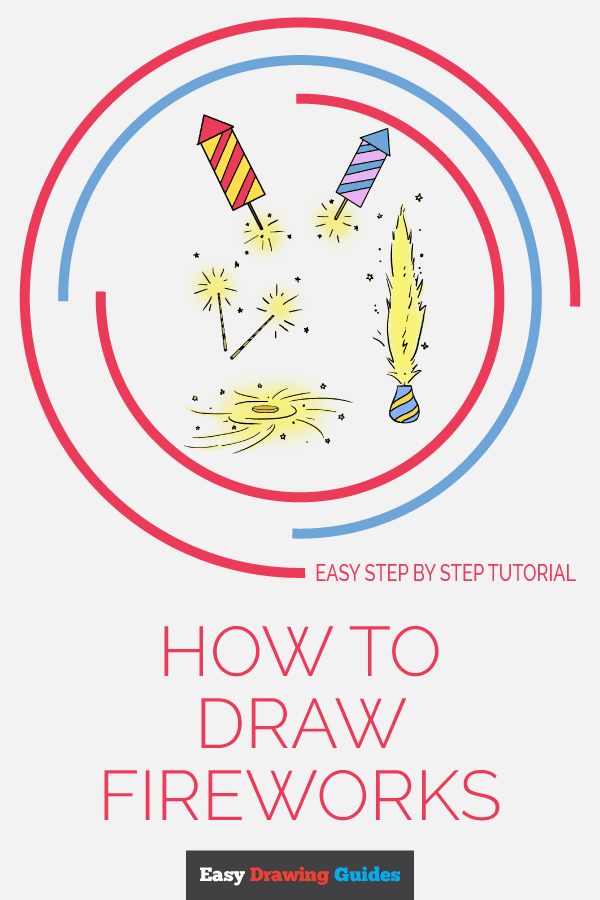 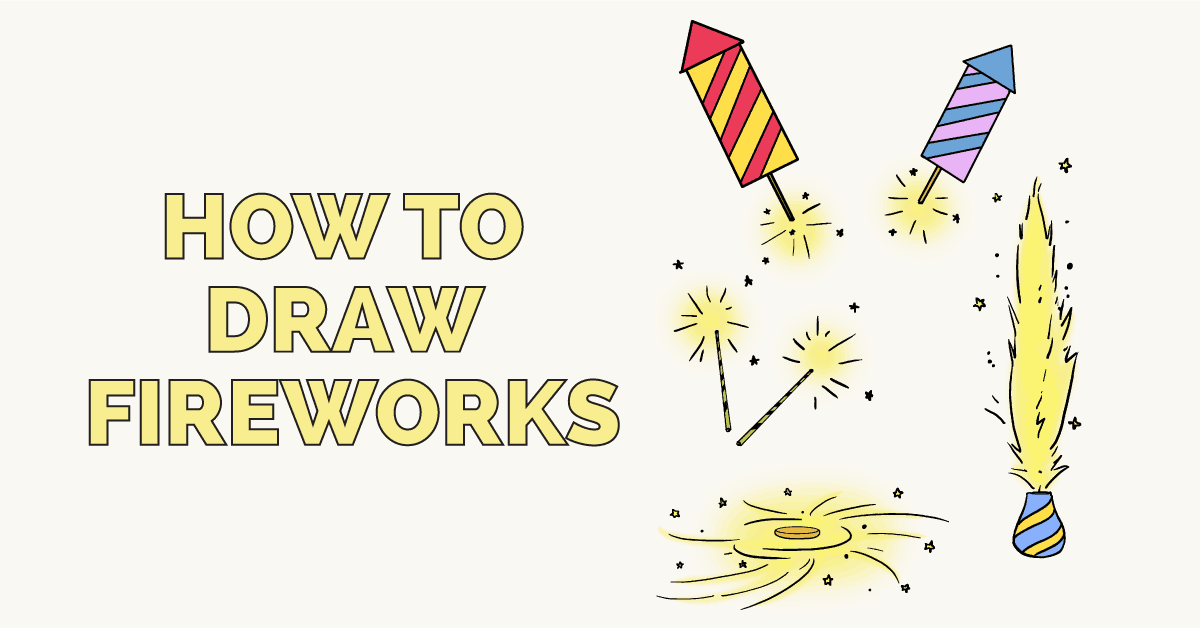 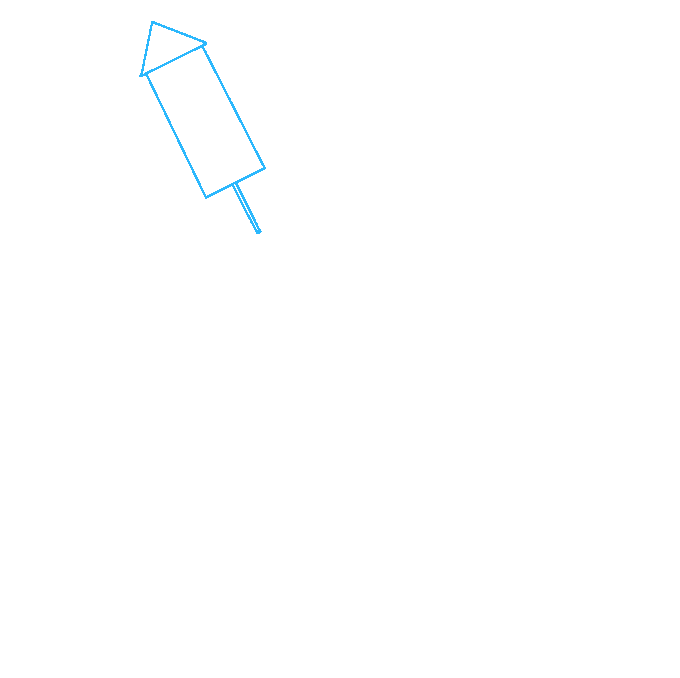 1. Begin by drawing a rectangle, tilted at a diagonal angle. This forms the fuselage, or body, of the first firework rocket. Draw a triangle at its top, and a pair of narrowly spaced, parallel straight lines at its base. 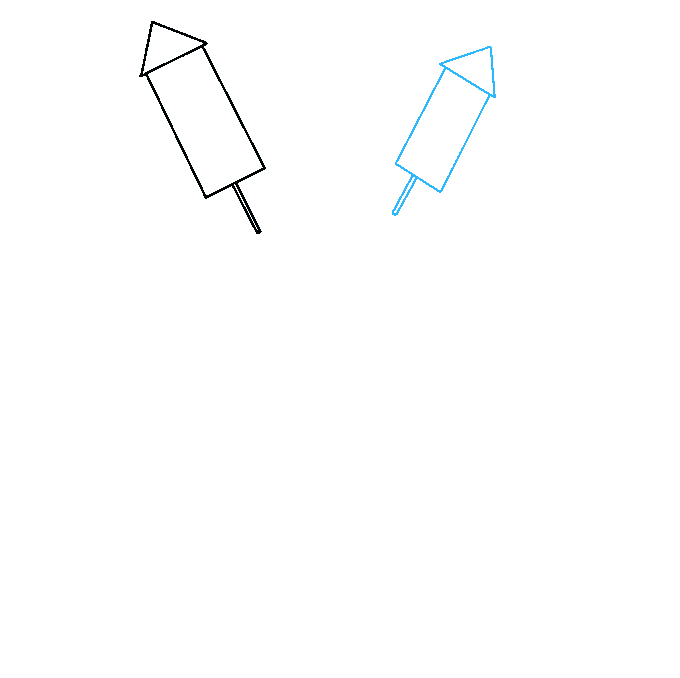 2. Draw another, slightly smaller rectangle, tilted to the opposite diagonal. Draw a triangle on top of it, and two narrowly spaced, straight, parallel lines at its base - these form the fuse. 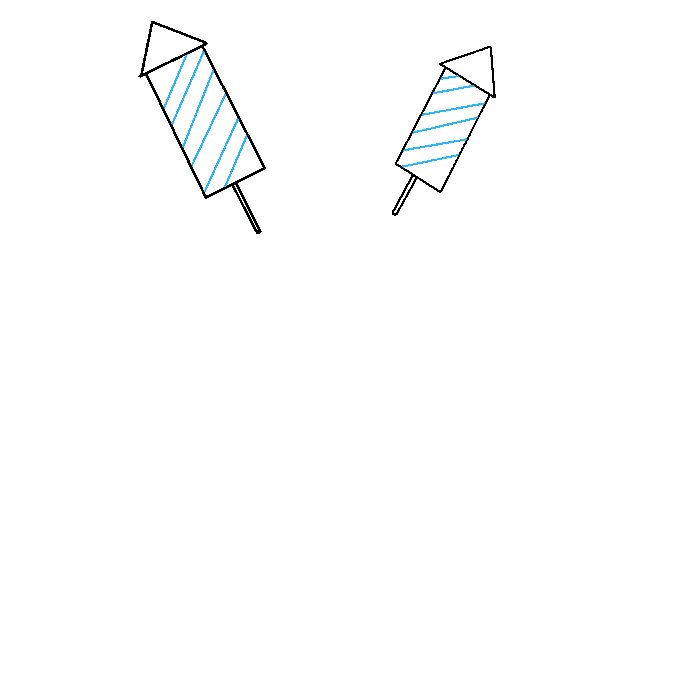 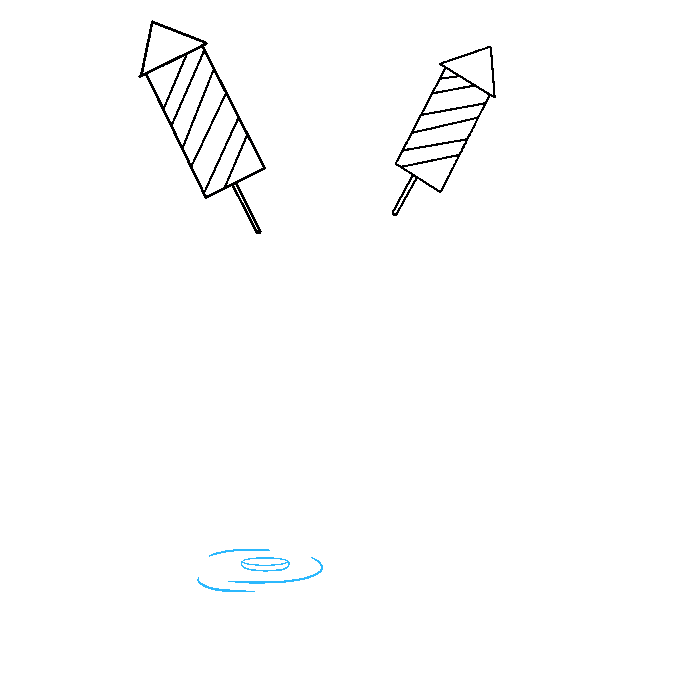 4. Begin to draw another type of firework using a flattened oval. Draw a curved line across the oval, then encircle the shape with curved lines.

How to Draw a Happy New Year Card 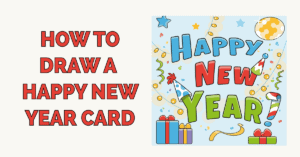 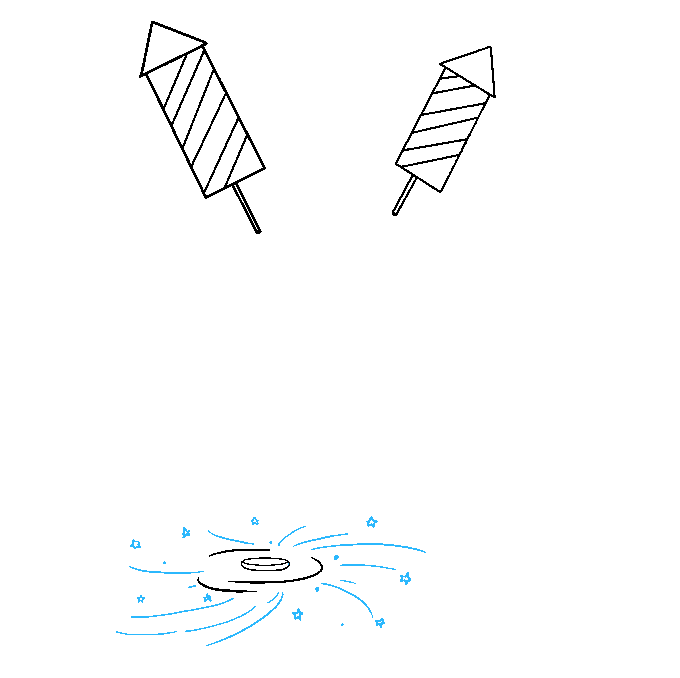 5. Draw curved lines of various lengths extending outward from the firework. Then, draw tiny stars and dots amid these lines to indicate sparks. 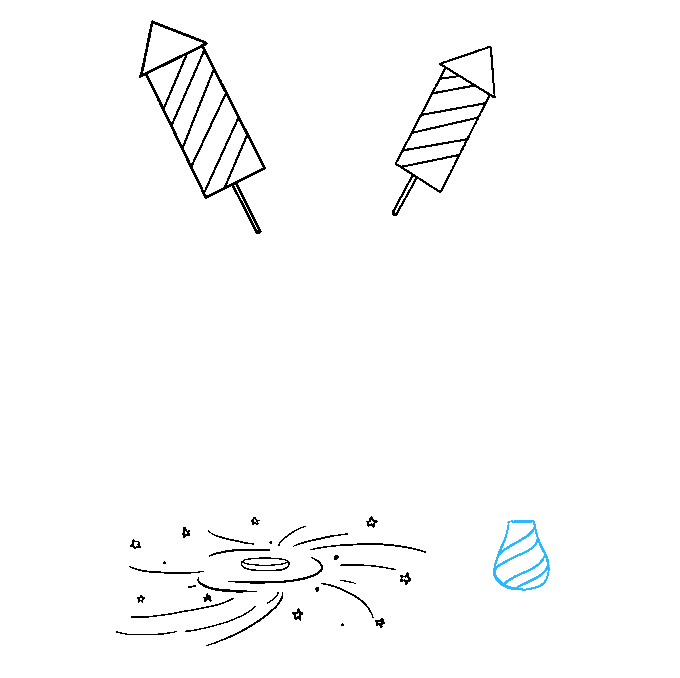 6. Draw an irregular rounded shape, larger at the bottom and smaller at the top. Connect the top using a short, straight line. Stripe the shape with curved lines. This firework should resemble a flower vase. 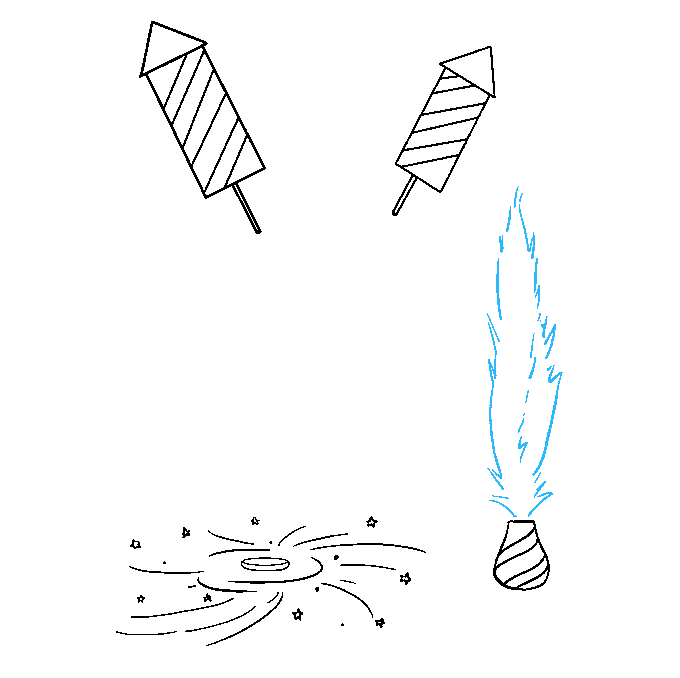 7. From the vase shaped firework, draw a flame erupting upwards. Use lines of various lengths, and allow some to connect in sharp points. 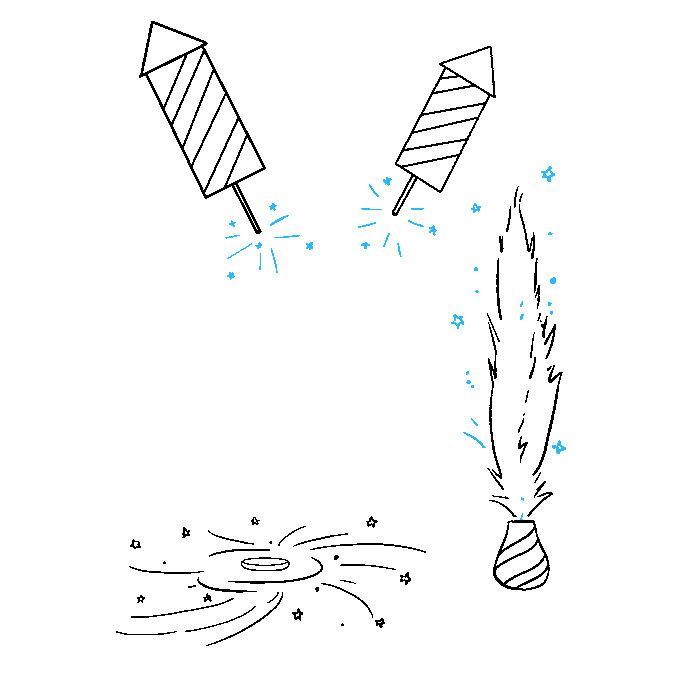 8. Draw straight lines extending in a starburst pattern from the fuses of the original fireworks, and draw tiny stars to indicate sparks. Draw lines, dots, and stars surrounding the flame of the vase shaped firework. 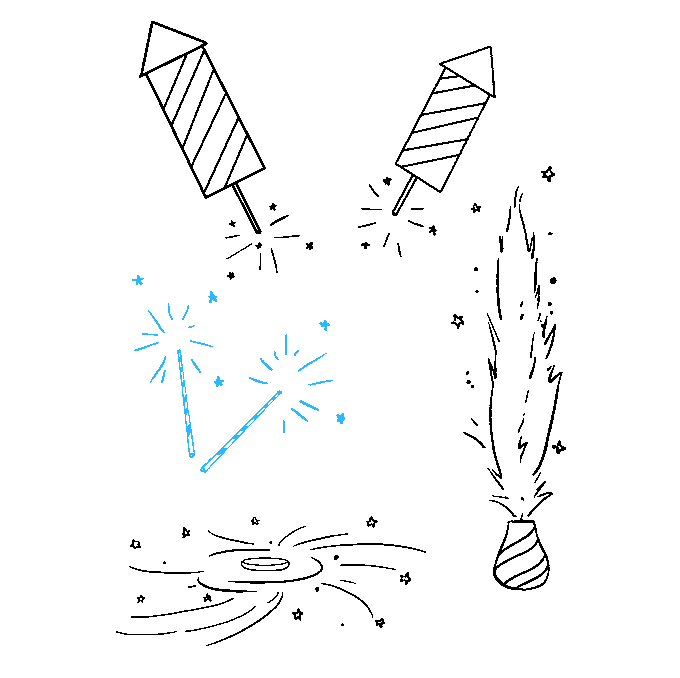 9. Draw a set of sparklers. For each sparkler, draw a set of narrowly spaced, straight, parallel lines. Connect the lines on the ends; stripe the sparkler and shade between the stripes. Draw straight lines in a starburst pattern around the tip, and stars to indicate sparks.

10. Color your fireworks display. The earliest fireworks came in only white or yellow, but today are available in a rainbow of colors. 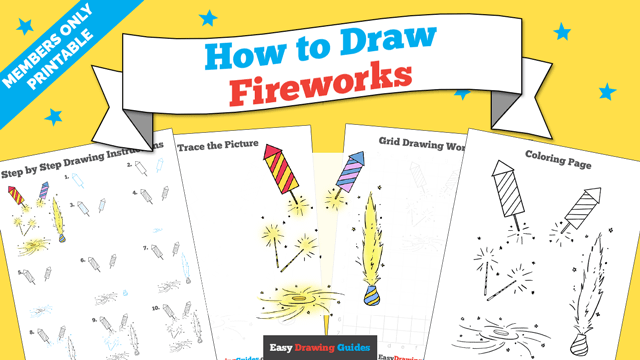