Mother's Day is a holiday celebrated in countries throughout the world. Common customs include children drawing greeting cards for their mothers, or giving them flowers or other small gifts. Gifts may also be presented to grandmothers, and wives may receive flowers or other sentiments from their husbands.

In many countries, such as the United States, Mother's Day is observed on the second Sunday of May. There, Mother's Day became an official holiday in 1910, due to the efforts of a social activist to honor her own mother, who had cared for the wounded during the Civil War.

You might be surprised to learn that setting a day aside to honor mothers is a custom with a long history. According to the Encyclopædia Britannica, the modern Mother's Day is “a festival derived from the custom of mother worship in ancient Greece. Formal mother worship, with ceremonies to Cybele, or Rhea, the Great Mother of the Gods, were performed on the Ides of March throughout Asia Minor."

Later, during the Middle Ages, it became customary for the fourth Sunday in Lent, a solemn religious observance preceding the Easter holiday, to be used to return home a visit one's mother. In Britain, this came to be called Mothering Day. At one time, pink-iced sweet buns were a part of the celebration.

Would you like to draw something to say "I love you" to your mom? This easy, step-by-step drawing guide is here to help.

You will need only a sheet of paper, an eraser, and a pencil. You may also wish to use crayons, colored pencils, or something similar to shade your finished drawing. Often, hearts are colored in shades of pink or red.

1.​ Begin by drawing a heart. To draw this familiar shape, use two curved lines, meeting in downward facing points at both the top and bottom.

2. ​​​Draw a pair of curved, horizontal lines across the the heart. This will form the "mom" banner.

3. ​Enclose each end of the banner using a short, curved line.

4. ​​​Beneath the banner, where it overlaps the edge of the heart, draw a short, straight, vertical line. Draw a second straight line extending from the first, the lines meeting at a perpendicular angle. This begins the ribbon-cut end of the banner.

How to Draw a Pocket Watch 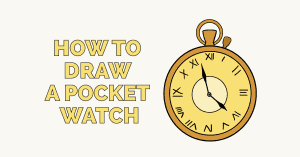 How to Draw a Light Bulb

How to Draw a Candle

5.​​ ​​​​Extend a slightly curved line outward from the edge of the banner. Connect this line to those below it using a "V" shaped line, enclosing the banner.

6.​ ​​​​​​​On the opposite side, extend a vertical line downward from the point where the heart and the banner meet. Then, extend a longer curved line from the bottom of this line at a perpendicular angle.

7. ​​Extend a curved line from the banner, and connect it to lines below it using a "V" shaped line. This encloses the end of the banner, forming a mirror image.

9.​​ ​​To indicate the folds in the banner and give it a three dimensional appearance, draw a curved line from the edge of the central portion of the banner to the corner of the banner end. Then, write the words "I Love You" across the heart and "Mom" across the banner.

10. ​​​​​ ​​​​​Color your heart. Remember, Mother's Day comes only once a year, but hard-working moms need our appreciation year-round. Every day is a good day to say "I love you, mom."

If love is in the air, check out our other heart based drawing tutorials, including a teddy bear with an "I Love You" heart and a broken, bandaged heart.

The Complete Mother's Day Heart Drawing Tutorial in One Image

How to draw: Mother's Day Heart - all drawing steps