Most children can recall hugging a cuddly stuffed animal known as a teddy bear. Do you know how this toy got its name?

​​​In 1902, president Theodore "Teddy" Roosevelt was on a hunting expedition in Mississippi. Some of the men trapped a black bear and suggested that the president shoot it. He refused because he felt it unsportsmanlike. A political cartoon in the Washington Post depicted the event, and a toy maker was inspired to craft a plush bear which he labeled as "Teddy's bear."

​​For over 100 years, teddy bears have been popular as children's toys. Some, such as Ty Beanie Babies and Gund bears, have at times been considered collectibles. Movies, books, and television shows have featured teddy bear characters, including Winnie the Pooh, Corduroy, Paddington Bear, and the Care Bears.

​​​​Would you like to draw an adorable teddy bear offering a his heart to someone you love? Doing so is easy with the help of this simple, step-by-step drawing tutorial. All you will need is a pencil, a sheet of paper, and an eraser. You may also wish to use markers, colored pencils, or crayons to color your finished Valentine bear drawing.

​Step by Step Instructions for Drawing ​​​a ​Valentine Bear

2. ​​​​​​​​​​​​​​​​Draw two smaller, partial circles at the top of the original circle. These will form the bear's ears. Inside each ear, sketch a circular shape using a series of short, curved, overlapping lines. This details the inside of the ear and gives it a furry appearance.

3. ​Draw a heart. Allow the top of the heart to overlap the bottom of the head.

How to Draw a Book 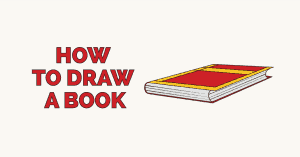 How to Draw a Boots

5.​ ​​​​Draw an oval overlapping the heart. This will form the bear's paw. Notice that short lines were used on one side to give it a furry appearance. Using a series of curved lines, sketch in the arm. Note the curved lines that form the bend of the elbow. Erase guide lines as necessary.

6. ​​​​Sketch in another oval above and behind the heart, forming the other paw. Again, note the furry overlapping lines. Use a long line for the arm and shoulder. Notice the short lines indicating fur near the neck.

8. ​​​​​​​Sketch a furry circle at the bottom of the head. This will be the bear's snout. Draw a curved, upside down triangle at the top of the snout, forming the nose. Add shine to the nose using a small oval. Draw a straight line downward from the nose, and join it to a large, "U" shaped smile. For each eye, draw a small circle surrounding a smaller circle, and shade between the two. Finally, use short lines to indicate fur near the top of the head.

9. ​​​Draw a trail of short lines parallel to the outline of the heart, indicating stitches. Write the words "I Love You" across the heart.

10.​ ​​Color your bear. Early teddy bears were brown, but today they may resemble black bears, polar bears, pandas, or even come in a rainbow of colors. Hearts, too, are typically depicted in shades of pink or red, but the choice is yours.

​Want to expand your skills by tackling more hearts and bears? From polar bears, to grizzly bears, to teddy bears, we've got them all. Don't be broken hearted, because we've got the drawing tutorials for you.

The Complete Teddy Bear with Heart Drawing Tutorial in One Image

How to draw: Teddy Bear with Heart - all drawing steps