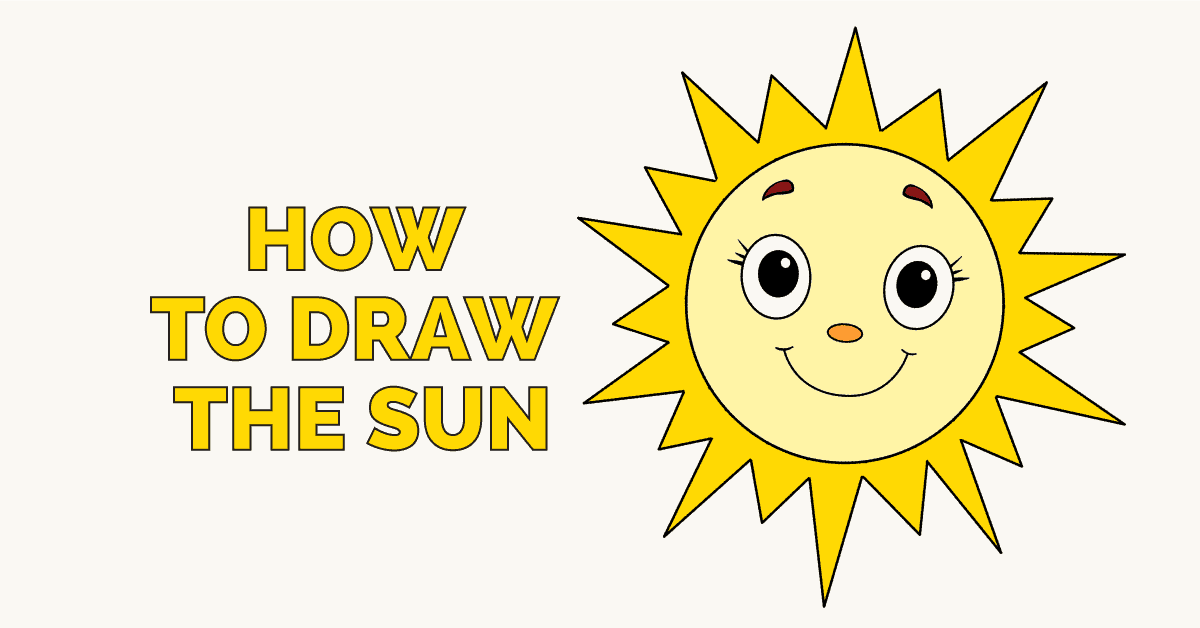 The sun is the star at the center of our solar system. This star is 93 thousand miles from the earth, yet it takes only 8 minutes and 19 seconds for its life sustaining light to reach us.

Throughout the world, the sun was worshiped in various ancient cultures. Festivals held in winter time were meant to bring the sun-god back for another agricultural season, and other rites were held to bring blessings on future crops or in thanksgiving for the current harvest.

As such, images of the sun appear early in human artwork. Often called a solar symbol, the sun may be depicted as a circle, a circle with rays - as in this drawing guide - a cross, a spiral, a halo, or a crown.

One of the earliest sun drawings with rays, similar to modern depictions, represented the "star of Shamash," a god in ancient Sumeria and Babylon. The similar Vergina Sun appeared in Greek art around 2,600 years ago.

A face was added to the rayed sun during the medieval period in paintings of the ancient sun gods Sol or Helios.

Today, sun images are still popular in art, animation, and decoration. A sun with a face - often wearing sunglasses - is a familiar icon of summer, and it is frequently used in weather forecasts.

The sun graces some national and regional flags, and it is a common design element in clothing and decor. Many animated films and television series have included a smiling sun, though often not as a main character.

Would you like to adorn your artwork or belongings with a little sunshine? Doing so is easier than ever with this simple, step-by-step drawing tutorial.

All you will need is a pencil, a piece of paper, and an eraser. You may also want to use paints, crayons, colored pencils, or markers to shade your finished drawing.

Follow the written instructions and accompanying illustrations, and your drawing will soon make every day a sunny day.

If you liked this tutorial, see also the following drawing guides: Clouds, Star, and Snowflake.

Step-by-Step Instructions for Drawing the Sun

1. Begin by drawing a circle. This forms the center of the sun.

2. Draw a number of tall, narrow triangles across the top of the circle. These triangles serve as the beginning of the sun's rays. At this point, your drawing will resemble a head with spiky hair.

3. Continue drawing tall, narrow triangles around the outside of the circle.

5. Continue drawing the smaller triangles until you have completed the circuit around the sun.

6. Draw two large ovals within the circle of the sun. These ovals will form the sun's eyes. Above each eye, draw a small, curved shape to form the eyebrows.

7. Erase the guide lines from the sun rays. You will now have a separate, spiky pattern around the sun rather than individual triangles.

8. Draw a small oval in the middle of the sun to indicate the nose. Beneath the nose, draw a wide, "U" shaped line. Draw a short, curved line at each end of the "U." This forms the sun's smiling mouth.

9. Add detail to the sun's eyes. Draw a large oval to form the pupil in each eye. Then, draw a small circle to highlight the eye. Shade between the circle and the oval. Finally, draw a few short, curved lines at the corner of each eye to indicate eyelashes.

10. Color your sun. Often, suns are colored using various shades of yellow. However, in nature, the sun can appear red or orange as well.

The Complete Sun Drawing Tutorial in One Image

How to draw: Sun - all drawing steps