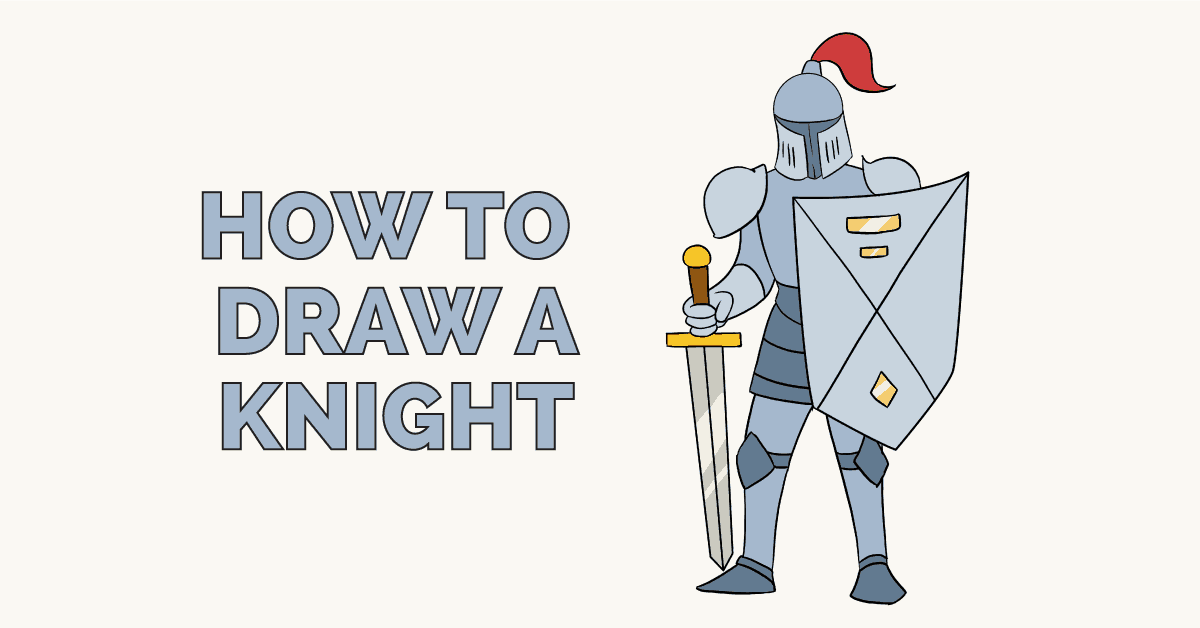 Who were the knights? In its earliest form, knighthood in medieval Europe consisted of professional cavalry, or soldiers on horseback. To become a knight, a young boy would receive training and then be apprenticed to a knight as his weapons bearer. When he had sufficient skills, and his armor and weapons could be afforded, he would be "knighted" - a ceremony often involving the touch of a sword on the shoulders. This practice still survives today.

Knights have become romanticized in popular culture, and this is no modern invention - romance novels have included knights since at least 1000 CE. A "knight in shining armor" has come to symbolize the romantic hero, and such characters feature prominently in film and literature.

The military prowess of knights faded with the invention of gunpowder. Today, knighthood is an honorary title bestowed upon a person by royalty to honor some service performed.

Would you like to draw a knight in shining armor? You can, with the help of this simple, step-by-step drawing tutorial. All you will need is a pencil, an eraser, and a sheet of paper.

​Step by Step Instructions for Drawing​​​ ​a ​Knight

1. ​​​Begin drawing the helmet using a circle. Within the circle, draw two curved lines. Extend a set of straight, parallel lines downward from the curved lines. Then, enclose a curved square shape alongside each of these lines. This creates the faceplate of the helmet.

2. ​​​​​​​​​Enclose the armor's breastplate beneath the helmet. Use a series of curved lines, meeting at rounded corners. Notice how the armor curves inward just above the waist.

3. ​​Next, you will draw the "skirt" of the armor, called the tasset. To draw the tasset, extend two slightly curved lines downward from the breastplate. Then, connect them using a curved line.

4. ​​​​​​​​​​​​​​Next, draw the shield. Begin the large shield by drawing a curved line across the breastplate, extending it beyond the shoulder. Then, extend a pair of slightly curved lines downward from each end. From these lines, angle a pair of straight lines inward until they meet in a point.

How to Draw Shrek

6.​ ​​Decorate the shield by drawing diagonal lines across it, crossing in the center at a perpendicular angle. Then, draw the shoulders of the armor. Draw a curved line, like a half circle. Then, extend a short line from each end. Connect these lines using a longer curved line.

7. ​​​Use a series of curved lines to sketch the arm and fingers. Draw a curved line across the arm to distinguish the gauntlet, or armored glove. Then, draw the legs. Outline the legs and feet using curved lines. Draw a diamond shape across each knee, and two parallel, horizontal lines behind it. Erase guide lines as necessary. Draw another set of curved lines across the ankles.

8.​​​ ​​Erase guide lines from the helmet and shoulders.

How to Draw Baby Groot

9.​​ ​​​​​​​Draw a sword in the knight's hand, erasing guide lines as necessary. Use a pair of lines for the hilt and a circle for the pommel. Beneath the hand, draw the guard using a narrow rectangle. Extend three lines to form the blade, meeting at a sharp point. Detail the breastplate and tasset with curved, horizontal lines. Decorate the shield using rectangles and diamonds. Finally, detail the helmet. Enclose a rounded shape on top, and extend two curved lines that meet in a sharp point. Sketch horizontal and vertical lines across the helmet.

10. ​​​Color your knight, and then expand the scene using our other medieval drawing guides. Give him a castle, a faithful steed, and a dragon to fight.

The Complete Knight Drawing Tutorial in One Image

How to draw: Knight - all drawing steps