For most of history, children merely shared outdoor spaces with adults. They played in fields, marketplaces, gardens, and backyards.

But by the late 1800s, the "children's play movement" had taken hold in Germany and America. It began with sand piles enclosed by wooden boards, commonly known as the sandbox. Later, play equipment was added to entertain older children. Thus, the playground was born.

Playgrounds have changed little over the decades - elements such as slides, swings, and climbing bars remain. The playground, too, has become a childhood icon. This is well demonstrated by children's television cartoons such as Disney's Recess, which depicts children's lives as revolving around time spent on the playground.

Today, playgrounds are considered to be architecture. Since the 1960s, playground design has been equated to a science, taking child psychology and other philosophies into consideration. Many playgrounds encourage not only play, but learning as well.

Would you like to draw your own playground? Doing so is simple and fun with the help of this easy, step-by-step drawing tutorial. All you will need is a pencil and a sheet of paper, and perhaps an eraser. You may also wish to color your finished drawing.

If you liked this tutorial, see also the following drawing guides: Sunset, Desert, and Ocean.

​Step by Step Instructions for Drawing​ a Playground

1. Begin by drawing two pairs of narrowly spaced, upside down "V" shaped lines. Connect them on the ends using short lines. Then, connect the points of the "V" with a set of parallel lines. This outlines the frame of the swingset.

2. Draw a rectangle between the legs of the swingset. Draw another layer of lines on two sides, connected at the corners, to give this swing seat a three-dimensional appearance. On each side of the swing, draw an upside down "V" to indicate the supporting chains or ropes. Then, connect it to the top of the swingset. Don't forget the small ovals to indicate where the ropes attach to the bar.

3. In front of the swingset, draw a diagonal rectangle. This will become the seesaw. Use parallel lines to give it a three-dimensional appearance.

4. Detail the seesaw, erasing lines as necessary. Draw upside down "U" shaped lines, connected at the bottom by a straight line, to form the base of the seesaw. Draw a small circle in the middle of the base, and use a curved line to give it a three-dimensional appearance. Then, draw a "T" shape extending upwards from each side of the seesaw, forming the handles.

5. Draw a pair of parallel, upside down "V" shaped lines. Connect them at the ends. This forms the support of the slide.

6. Draw four parallel lines, connected at each end. This forms the slide itself. Add a few hatch marks to texture the bend of the slide.

7. Draw another pair of upside down "V" shaped lines passing behind the slide, supporting the opposite side.

8. Draw pairs of horizontal, parallel lines between complimentary sides of the "V" shaped lines. These are the rungs of the slide's ladder. 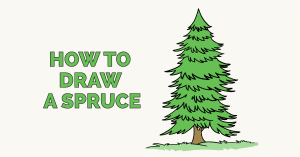 9. Set the scene with grass, shrubbery, and trees. Use short, curved lines that meet in jagged points to form tufts of grass. Outline bushes and the tops of trees with cloudlike formations of curved, "U" shaped lines. Use additional curved lines to form the trunks of the trees and to outline the entire playground.

10. Color your playground. Whether it is rusty or new, that is up to you. Don't forget to color the green grass or cushiony mulch or sawdust beneath the playground equipment.

Check out our selection of people drawing guides in order to fill your playground with happy faces.

The Complete Playground Drawing Tutorial in One Image