Skip to content
Easy Drawing Guides > easy, landscape, other, summer > How to Draw a Desert 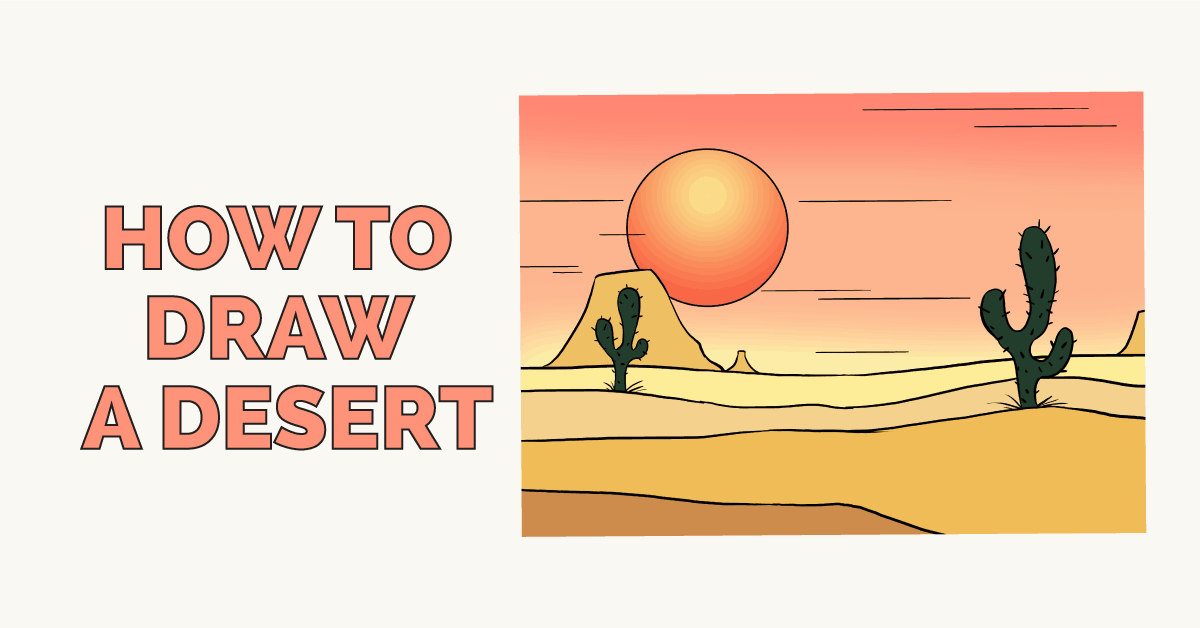 The desert is “a barren area of landscape where little precipitation occurs and consequently living conditions are hostile for plant and animal life.” Deserts are typically hot and dry, and some are known for sand dunes or dangerous sand storms. Deserts, however, are not deserted. There are certain plants and animals well adapted to live there.

Cacti, such as the saguaros pictured in this tutorial, are special plants that are able to store large quantities of water. Desert animals include birds, insects, lizards, snakes, scorpions, tarantulas, rodents, foxes, and bats. Most desert animals are active at night to avoid scorching daytime temperatures.

Did you know? While deserts are hot during the day, many become very cold at night. Some deserts, such as Death Valley in North America, bloom with flowers a few times a year after a heavy rainstorm.

Deserts are often used as metaphors in art and literature. They may symbolize death, poverty, or a desolate future. A common desert image is that of the mirage of a desert oasis. A mirage is an optical, or visual, phenomenon in which light is bent to produce a false image. When a person sees a mirage, the light is playing tricks on the eyes so that the person thinks he sees water or structures that don’t actually exist.

Would you like to draw your very own cartoon desert? Doing so is easier than ever with the help of this simple, step-by-step drawing tutorial. You will need only a pencil, pen, or marker, and a sheet of paper. You may also wish to employ crayons, colored pencils, paints, or markers to shade your finished drawing.

In each step of this easy drawing guide, you will find a detailed illustration as well as explanatory text. In each illustration, pay special attention to the lines highlighted in blue. These indicate new lines to be added to your drawing.

If you liked this tutorial, see also the following drawing guides: Night Sky, Moon, and Flames and Smoke.

1. Begin by outlining a cartoon desert cactus. Draw a long, curved line, allowing it to double back on itself, forming the arm of the cactus.

2. Continue the outline of the cactus on the opposite side, again using a long, curved line.

3. Draw ground beneath the cactus using a long, curved, horizontal line. Draw a few short, curved lines at the base of the cactus, indicating hardy desert grasses.

4. Draw another long, curved, horizontal line above the first. This indicates the desert’s rolling dunes of sand.

5. Using a long, curved line, enclose a second cactus in the background, planted firmly on the upper horizontal line.

6. Draw the horizon line using a long, horizontal, curved line. The horizon marks the point where the ground meets the sky. Above the horizon, outline several mesas, or flat topped mountains, of various sizes. For each mesa, extend two diagonal curved lines upwards from the horizon line. Connect the lines at the top using a straight, horizontal line.

7. Detail your cacti with needles and spikes. For each cactus spike, draw a short, straight line. Don’t forget to add a few short, curved lines of desert grass to the cactus in the background.

8. Draw a sun hanging low in the desert sky. Do so by drawing a circle, allowing it to disappear behind one of the mesas.

9. Add the final details to your drawing. Add another line of drifting sand in the foreground. Draw a number of straight, horizontal lines of various lengths across the sky, indicating clouds, rising desert heat, or bands of sunset colors.

10. Color your desert landscape. Don’t forget to populate your desert using our other tutorials, including the cactus, wolf, fox, and snake.

The Complete Desert Drawing Tutorial in One Image

How to draw: Desert - all drawing steps 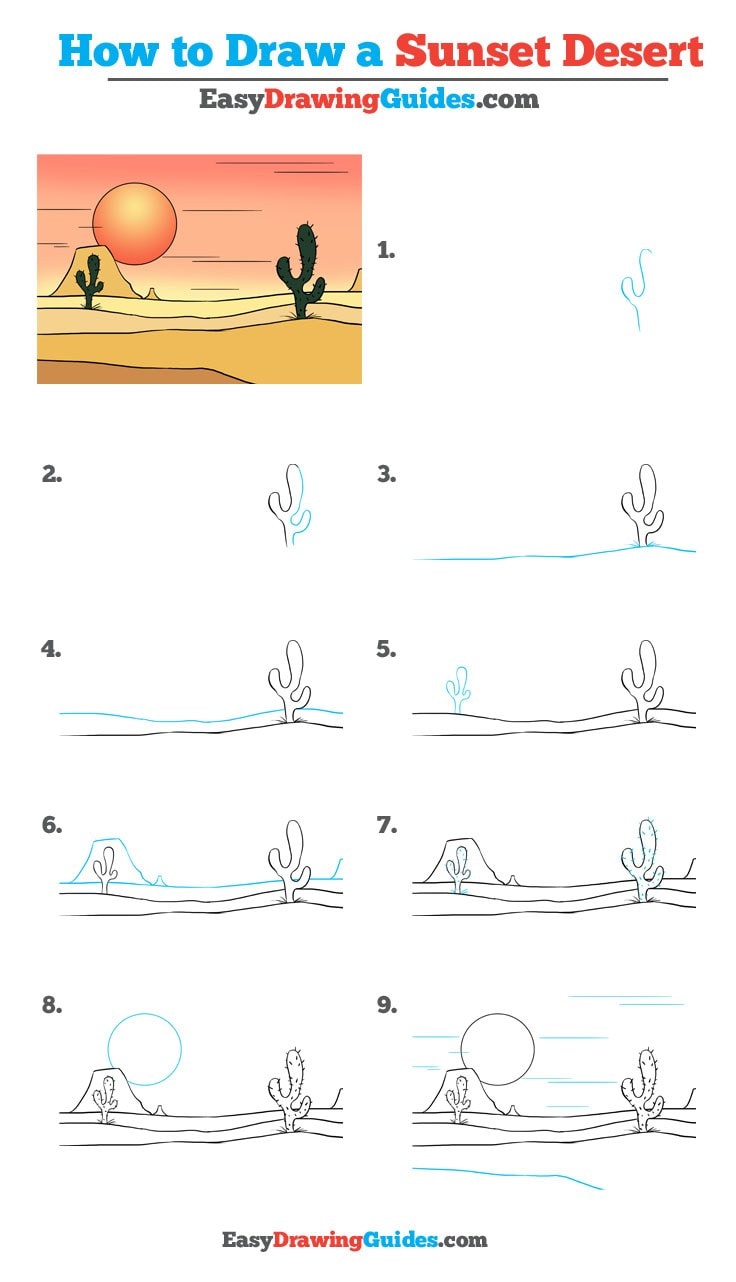