Skip to content
Easy Drawing Guides > easy, halloween, other, people, scary > How to Draw a Skeleton 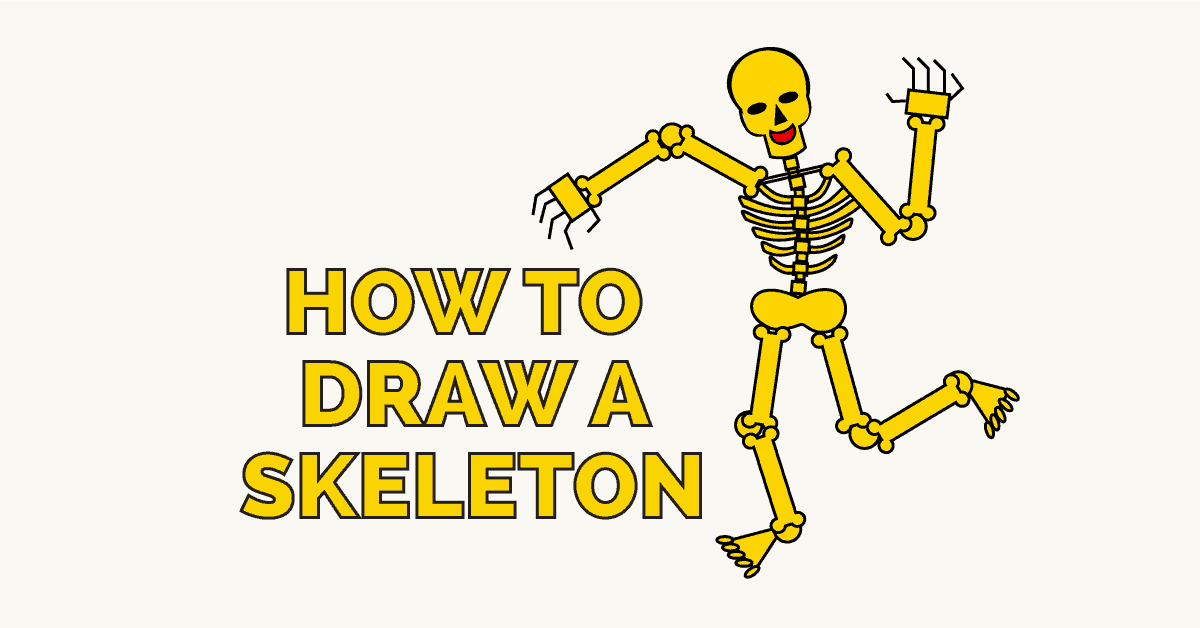 The skeleton is the "supportive framework of an animal body." The human skeleton is comprised of many different bones, held together by cartilage.

Skeletons have long been used in art and fiction as symbols of death, the afterlife, and the paranormal. During the Middle Ages, a style of art called danse macabre or the dance of death, employed dancing skeletons. This allegory taught viewers that everyone, from child to king, had the same eventuality of death.

In modern times, skeletons may be used as anatomical teaching tools in a classroom setting. Skeletons that "come to life" also appear in video games, movies, and television shows. Examples include Jack Skellington from The Nightmare Before Christmas and Achmed, a puppet used by comedian Jack Dunham. Skeletons are popular Halloween decorations. They also factor in other celebrations, such as the sugar skulls which commemorate the Dia de los Muertos or Day of the Dead.

Would you like to draw a cartoon skeleton? Follow the step-by-step instructions found in this easy cartoon drawing tutorial. You'll use geometric shapes to outline the basic shape, and add the details later. All you'll need is a pencil, an eraser, and a sheet of paper.

If you liked this tutorial, see also the following drawing guides: Ghost, Jack Skellington, and Skull.

Step-by-Step Instructions for Drawing a Skeleton 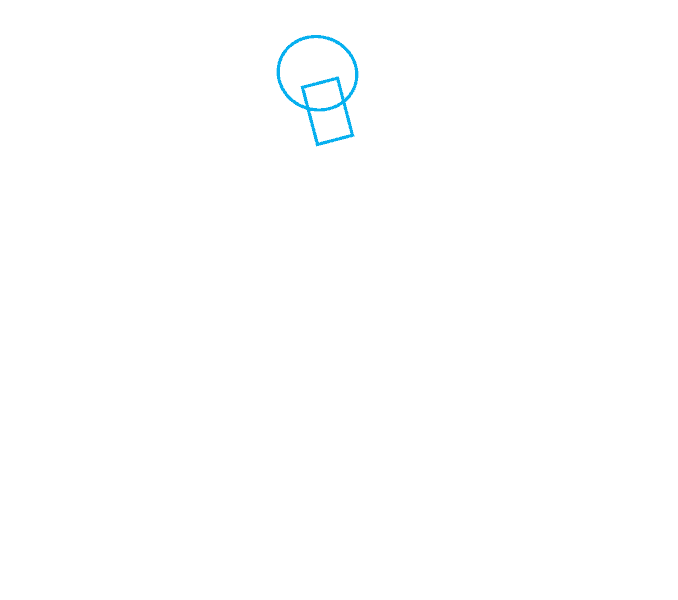 1. Begin by drawing a circle. Then, draw a rectangle overlapping the bottom of it. The circle outlines the cranium and the rectangle the mandible of the skull. 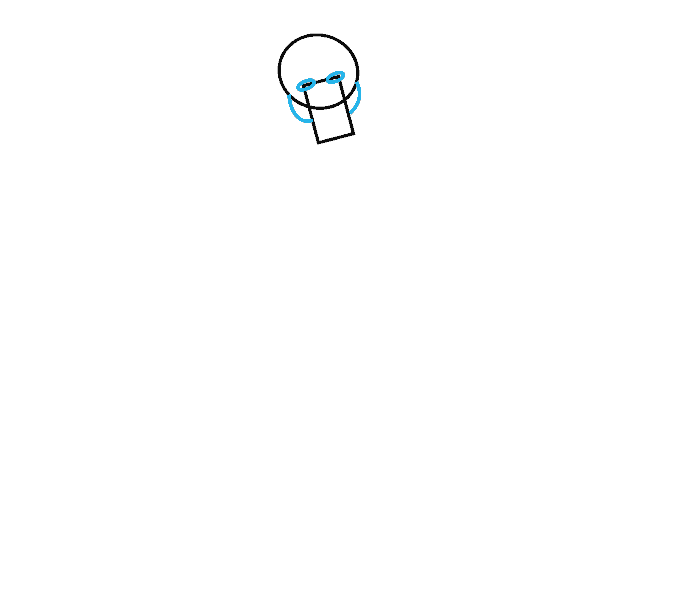 2. Draw two small ovals overlapping the upper corners of the rectangle. These are the orbits or eye sockets. Then, draw curved lines between the bottom of the circle and the rectangle. 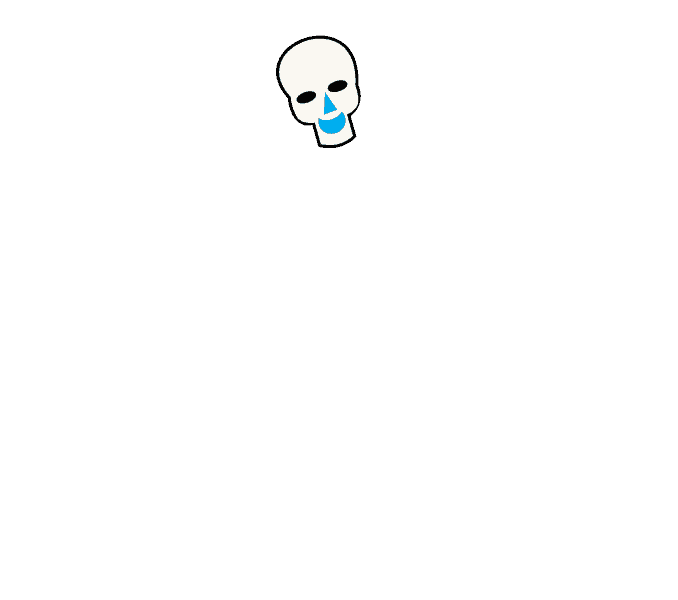 3. Erase the guide lines of the original circle and rectangle. Shade the orbits. Then, shade a small triangle for the nose and a crescent moon shape for the mouth. 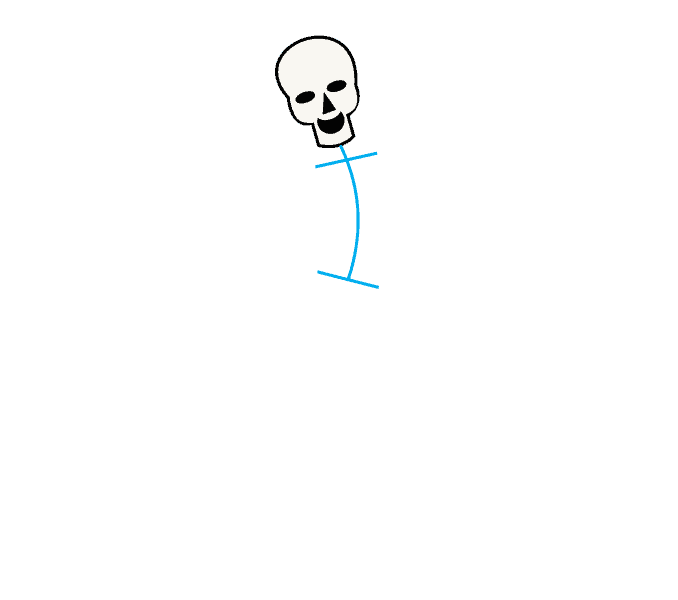 4. Below the skull, extend a curved line. This will become the spine. Draw two short straight lines across it to mark the shoulders and the hips. 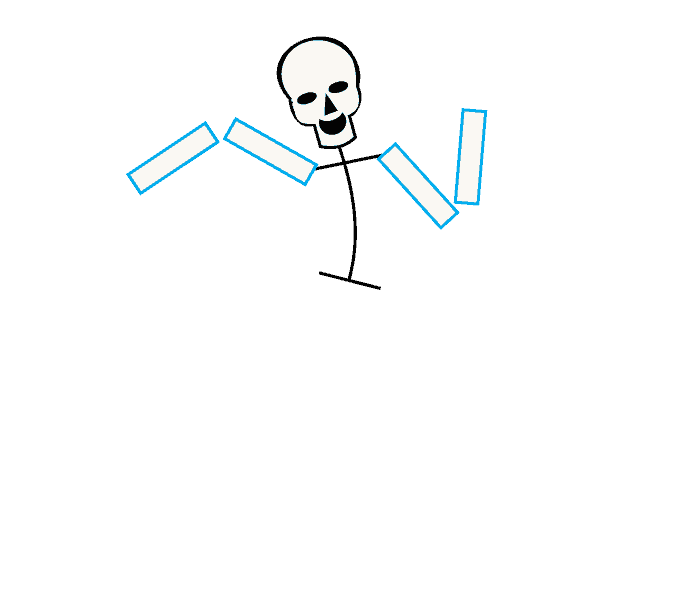 5. Draw a narrow rectangle at each tip of the upper straight line. Then, at the end of each rectangle, draw another rectangle diverging at an odd angle.

How to Draw a Hug

How to Draw a Kiss 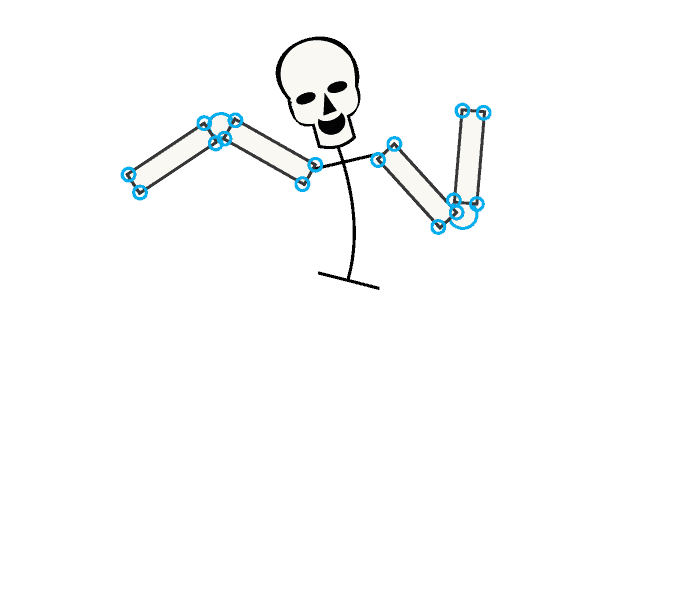 6. Draw a circle between each set of rectangles, forming the elbow. Then, draw a small circle around the corners of each rectangle. 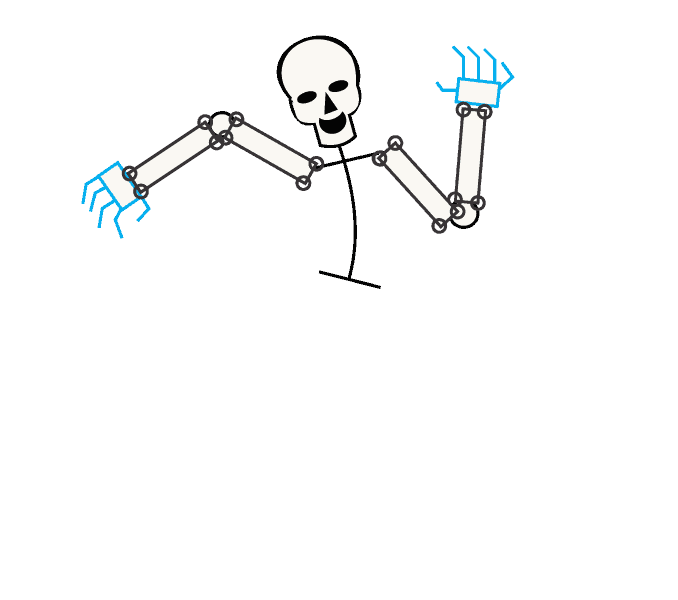 7. Draw a small rectangle at the tip of each arm to form the hand. From each hand, draw five short straight lines. From each of these lines, draw another straight line at an odd angle. These form the skeleton’s fingers. 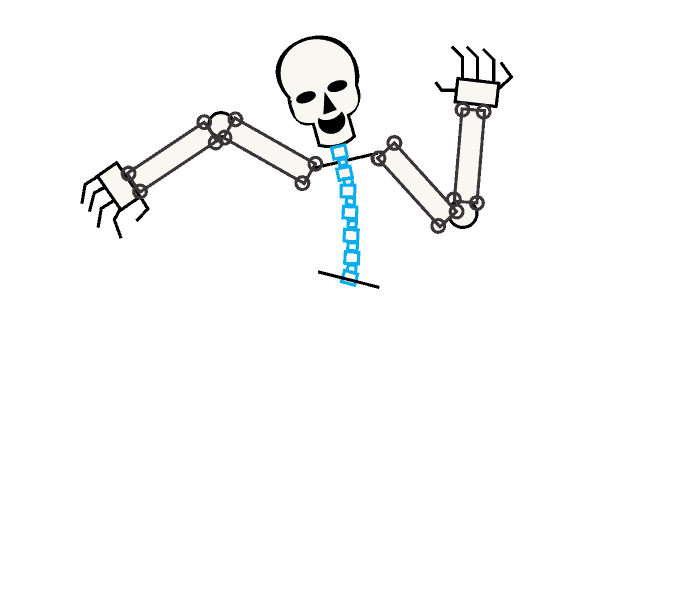 8. Draw an alternating series of small squares and circles along the spine. Erase the original line. 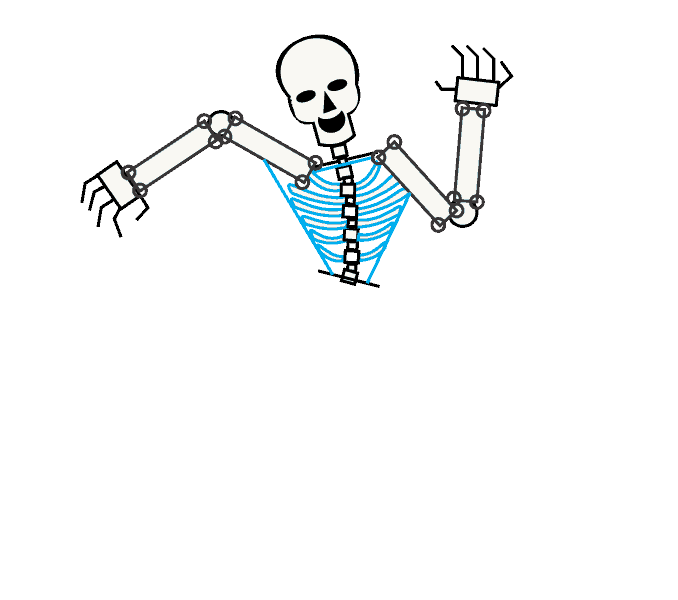 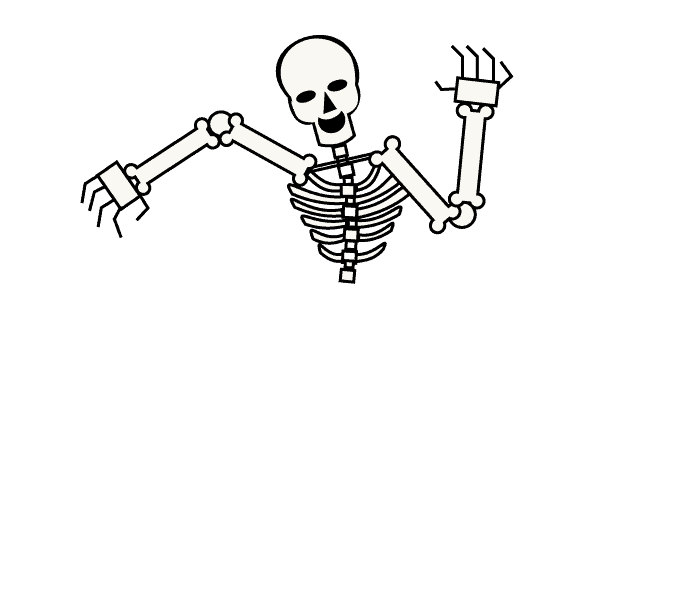 10. Erase the guide lines of the trapezoid and hips, as well as the original rectangles of the arm bones. 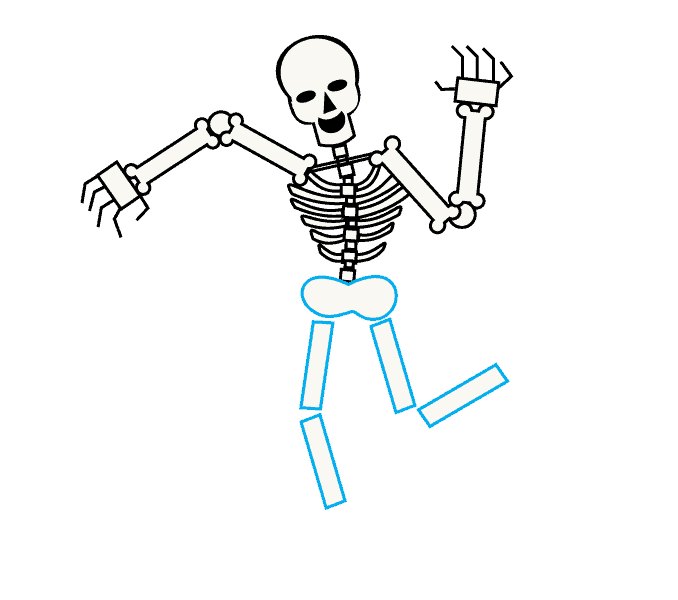 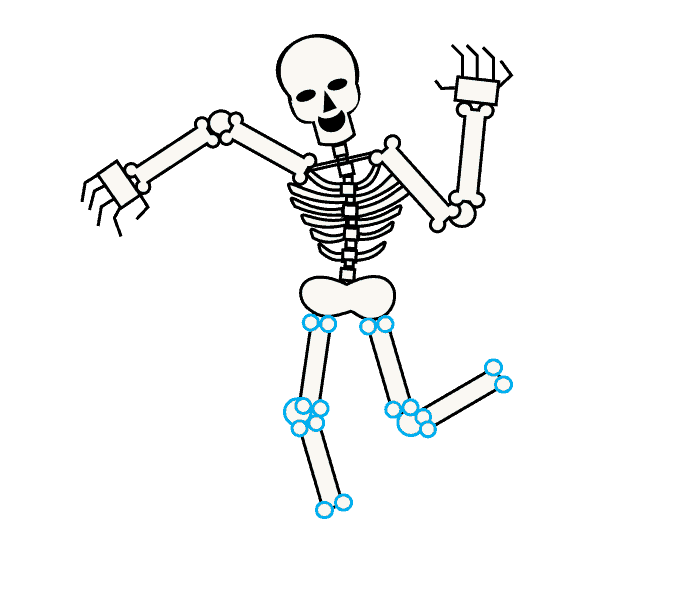 12. Draw circles between each pair of rectangles to form the knees. Draw small circles over each corner of the rectangles, erasing as necessary. 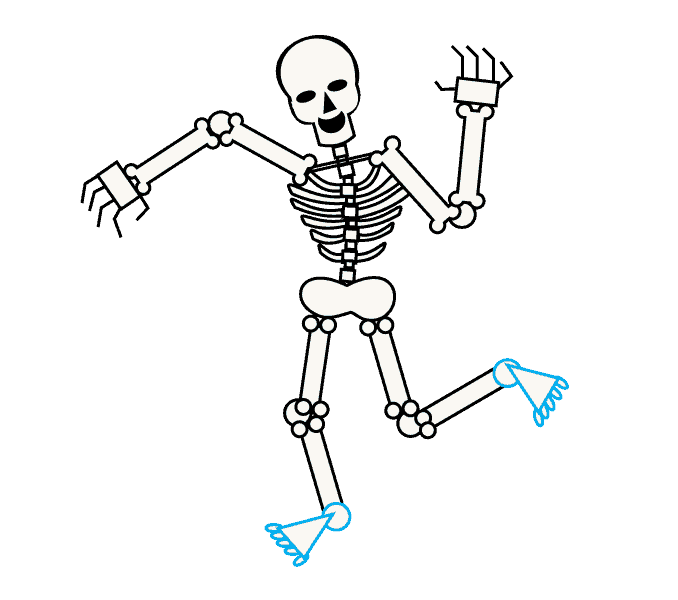 13. Draw a circle at the bottom of each leg, erasing as necessary. Then, draw a small triangle overlapping the circle to form the foot. Draw small ovals to form the toes. 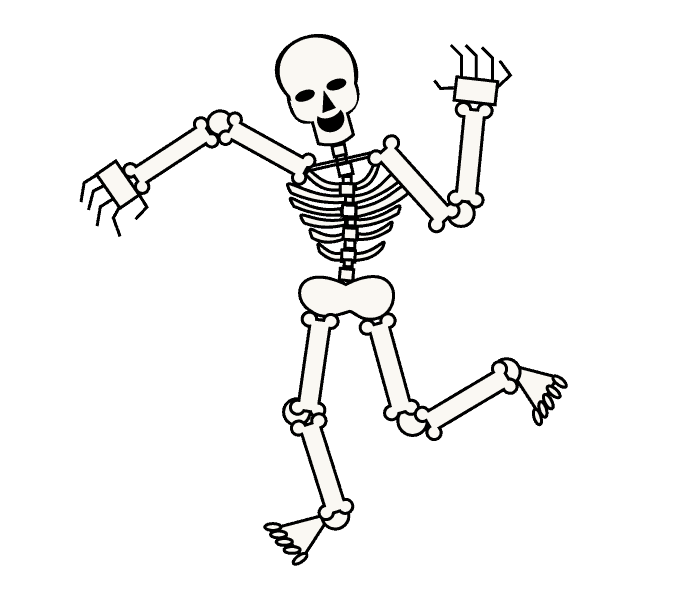 14. Erase the guide lines from the legs and feet. 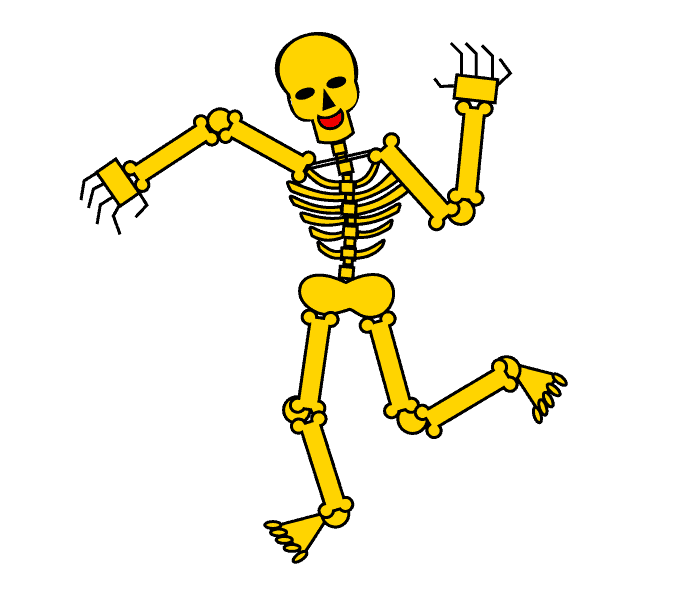