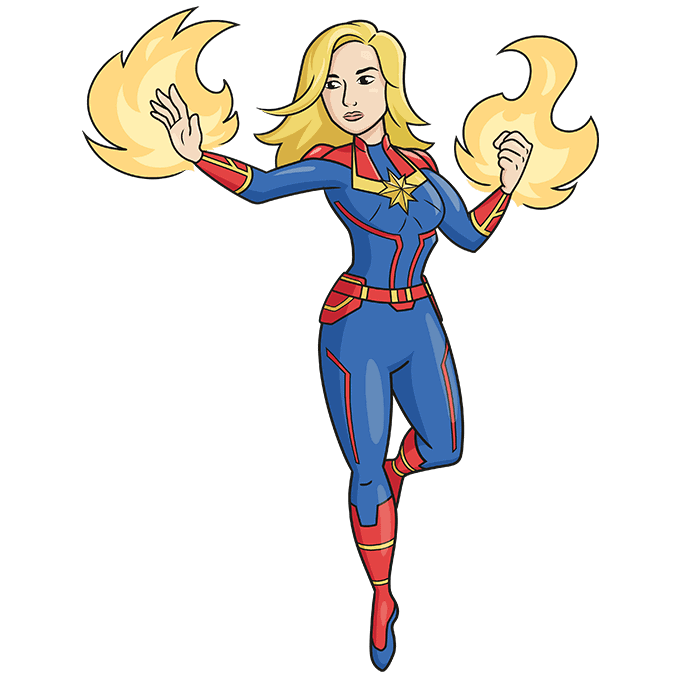 Captain Marvel - also known as Carol Danvers, the adoptive sister of Supergirl - received her superpowers when she became a hybrid of human and the alien Kree.

You can learn how to draw Captain Marvel today!

Captain Marvel is a key player in the Marvel Cinematic Universe. She was integral in helping Iron Man and others defeat Thanos.

Did you know? A previous incarnation of Captain Marvel or Mar-Vell was male. He was a "white-skinned minority of the blue-skinned Kree empire" who became a hero despite discrimination against him.

Eventually, he was assigned a mission to Earth and became sympathetic to its people.

Uncover your superpowers as you learn to draw your own comics and cartoons!

If you liked this tutorial, see also the following drawing guides: Iron Mans Mask, Thanos from the Avengers, and Hulk. 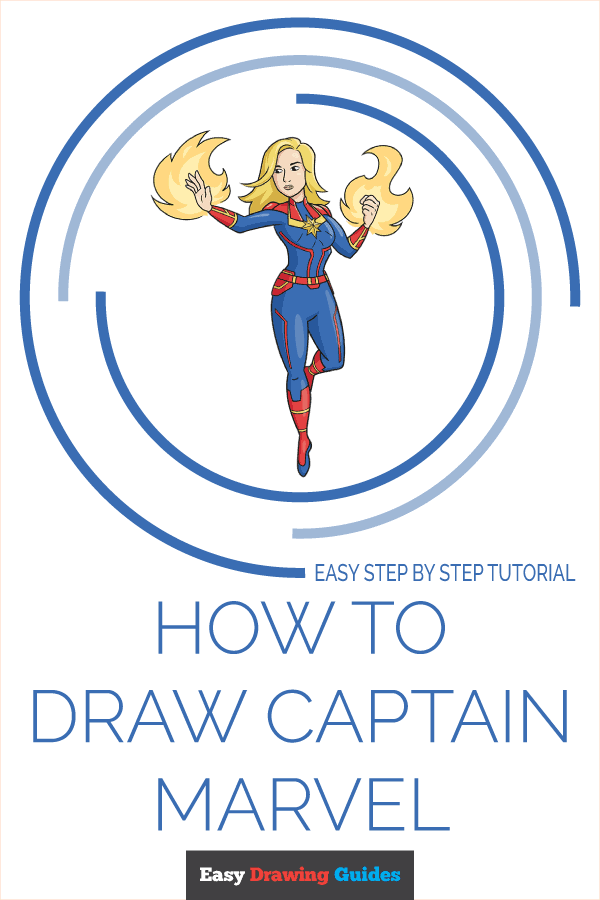 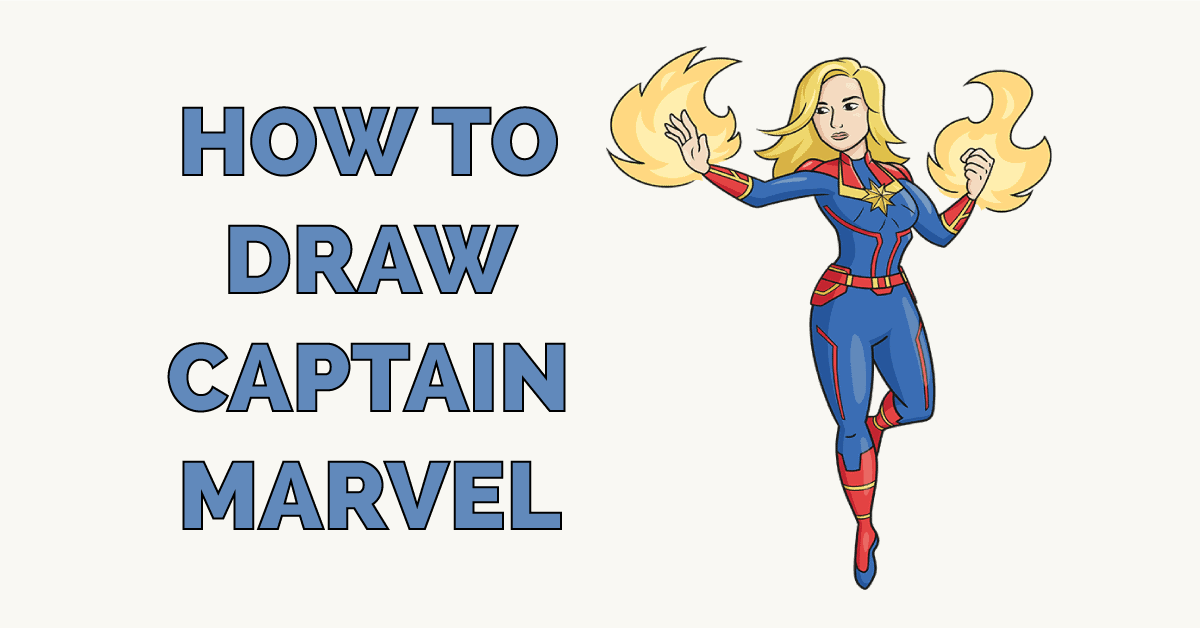 How to Draw a Great Looking Captain Marvel for Kids, Beginners, and Adults - Step 1 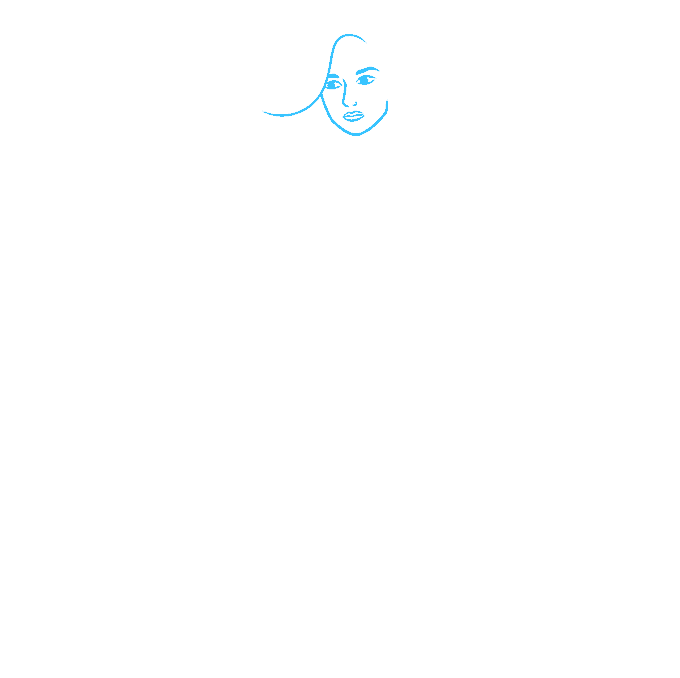 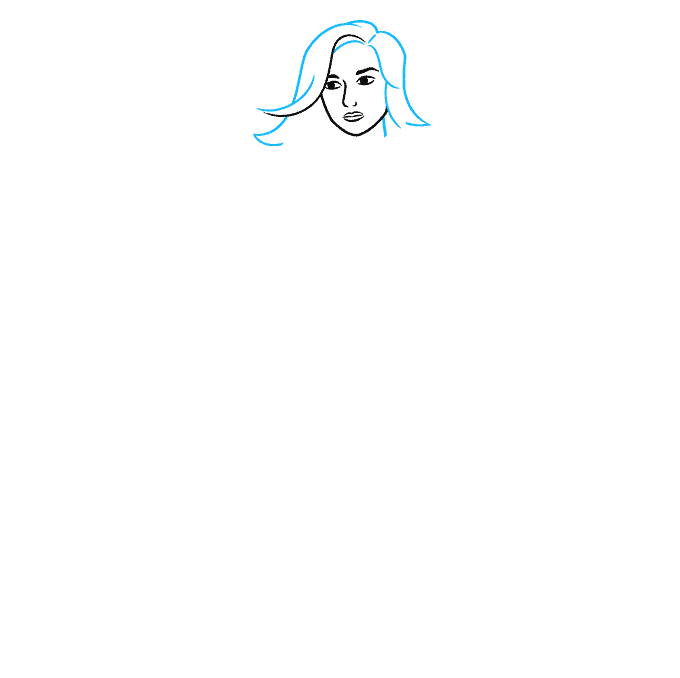 2. Use curved lines to draw the hair. Notice how locks of hair are made using pairs of curved lines that meet at points, and how the lines overlap to give the image depth. 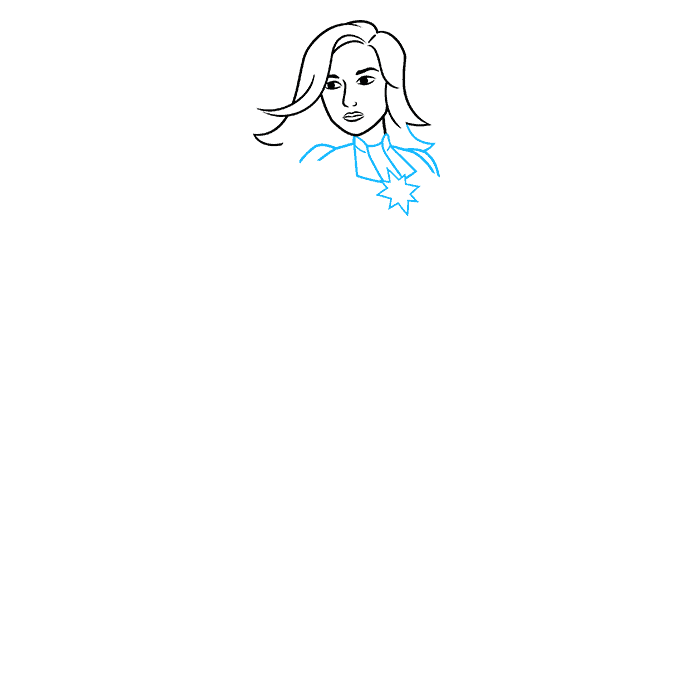 3. Sketch the shoulders and the top of Captain Marvel's uniform. Enclose crooked rectangular shapes to form the collar of the garment, with a short line for the crease. Between the portions of the collar, enclose an 8-pointed starburst shape. Use short, straight lines that meet at points. Then, use overlapping curved lines for the shoulders and the tops of the sleeves. 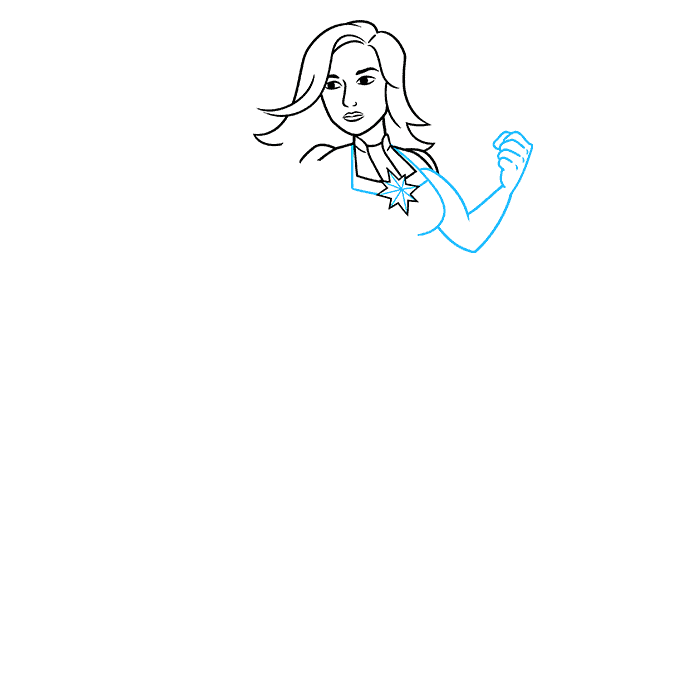 4. Use overlapping curved lines to draw the muscular upper arm, the lower arm, and the clenched fist. Draw a short line across each knuckle. Detail the garment with "L" shaped lines around the collar and straight lines between the points of the star. 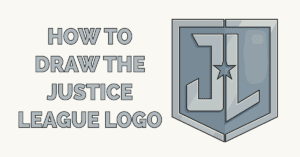 How to Draw Catwoman 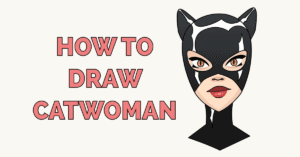 How to Draw a Chibi Supergirl 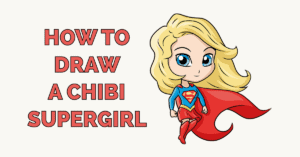 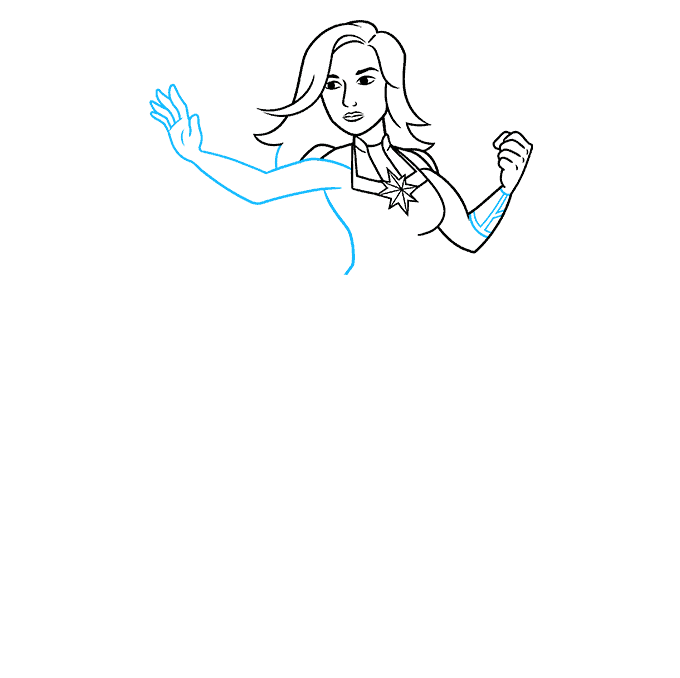 5. Use a pair of curved lines to sketch the extended arm, noting the bend of the elbow. Outline the hand and fingers using curved lines. Then, outline the side of the torso using a long curved line. Use pairs of curved and straight lines - some of them branching - to sketch a gauntlet on one wrist. 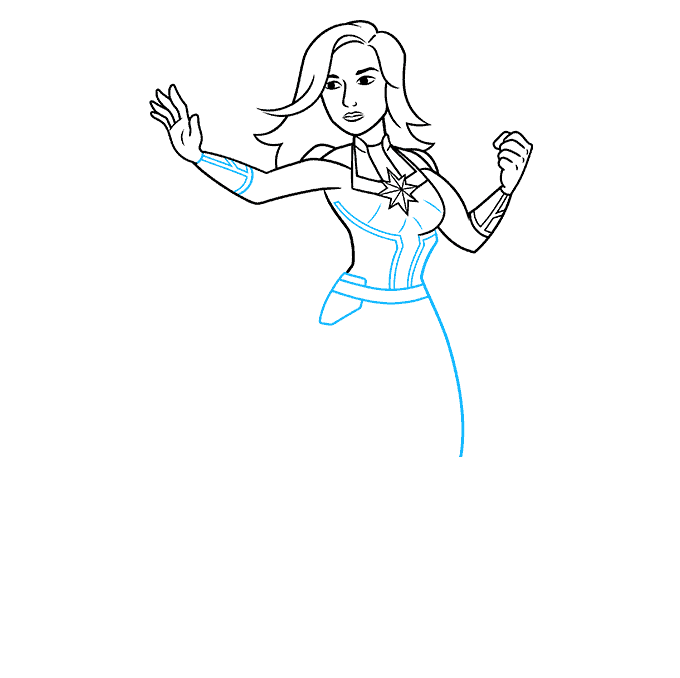 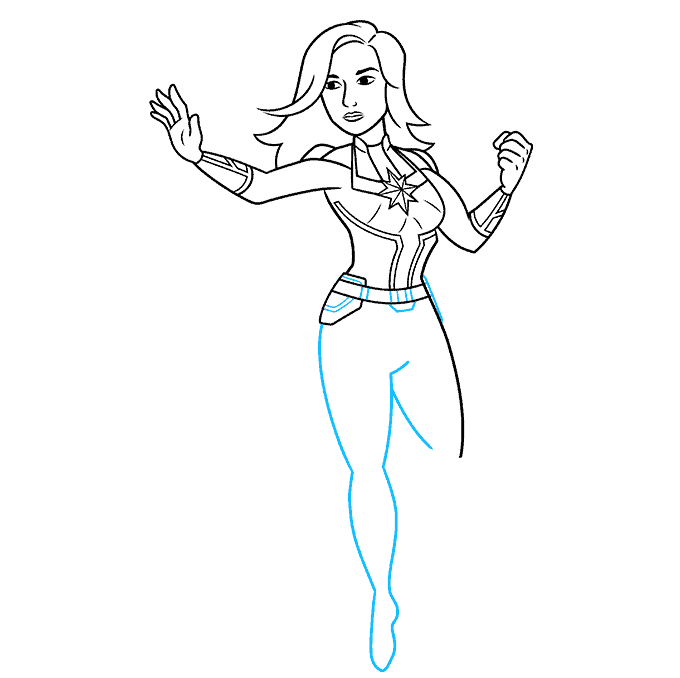 7. Use long curved lines to outline the leg and foot of the second leg, as well as the thigh of the first leg. Add further detail to the utility belt and its contents. Use pairs of lines and geometric shapes. 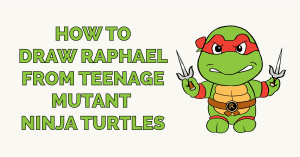 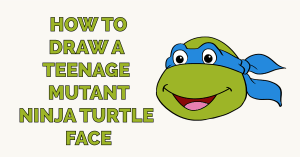 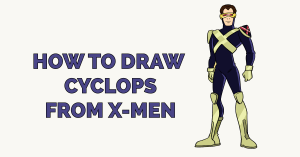 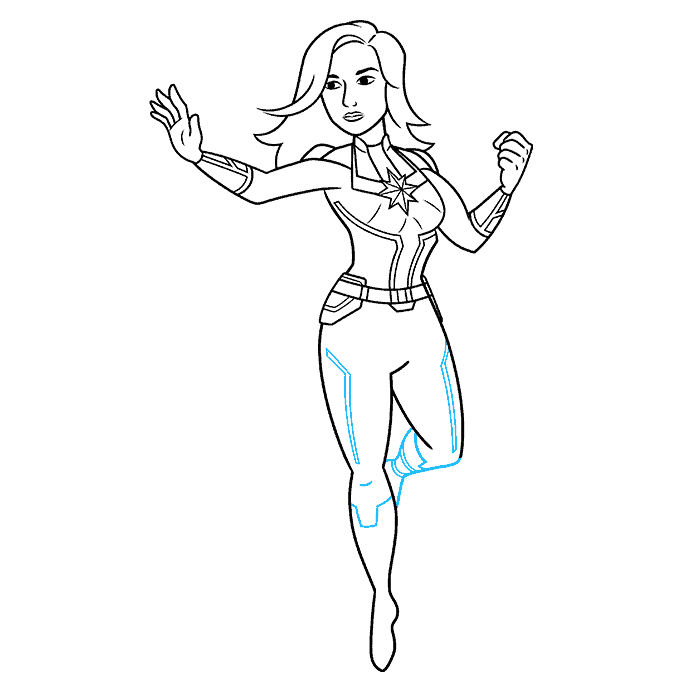 8. Use two curved lines to complete the remaining leg, bent at the knee. Notice that the foot is partially hidden behind the other leg. Draw a series of lines across each leg to indicate the top of the boots. Then, draw pairs of lines, connected on each end, to further embellish the uniform.

Complete the Outline of Your Captain Marvel Drawing - Step 9 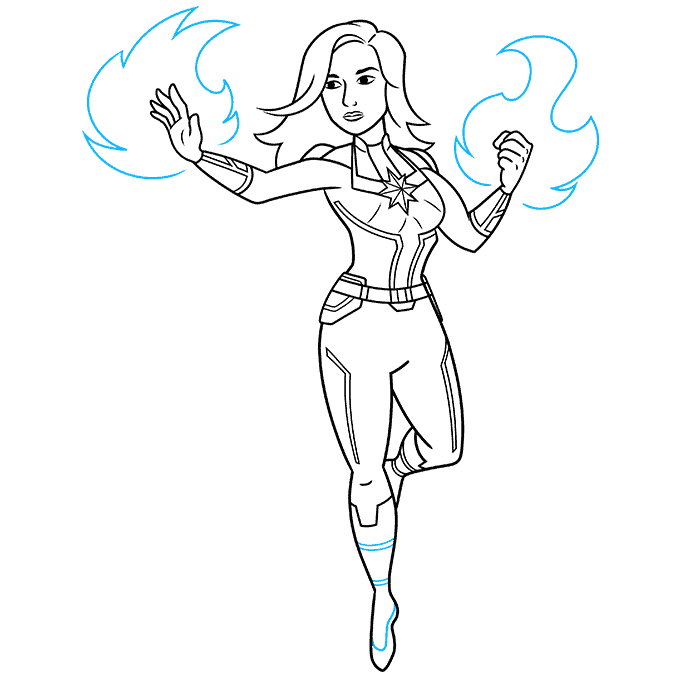 Color your cartoon of the superhero Captain Marvel. Her uniform is blue, red, and yellow. 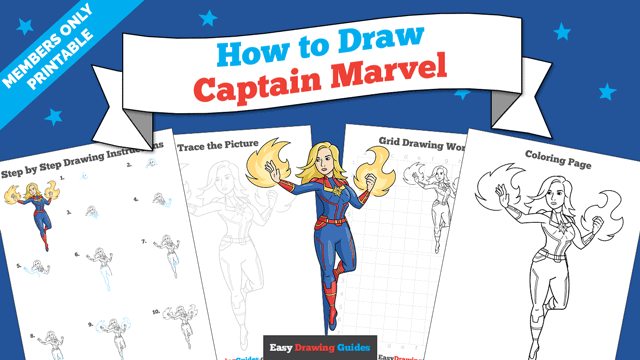