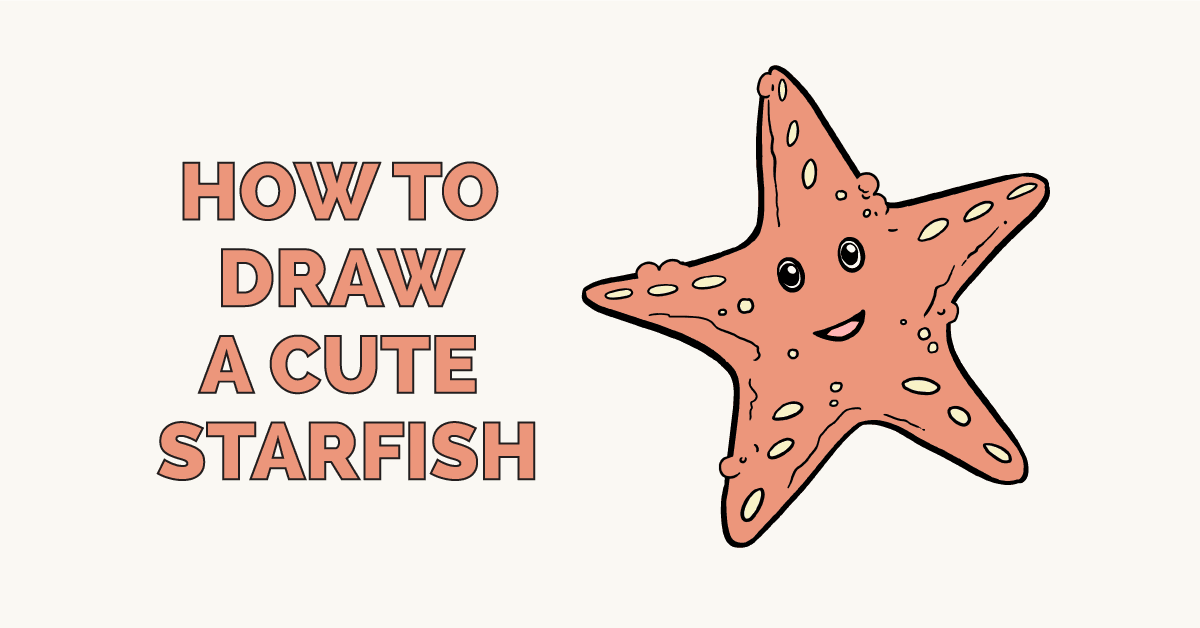 Starfish, also called sea stars, are ocean dwelling animals. They live all over the world, from tropical coral reefs to frigid polar ice caps, from the seashore to the deepest abysses.

They are ancient animals, appearing long ago in the fossil record. Starfish are predators; although they move slowly, they hunt other animals such as corals or molluscs.

Many sea stars have five arms, as in our drawing, but others have six, seven, ten, or fifteen arms. Starfish can regrow a lost arm; some can even grow into two separate individuals if cut in half.

The starfish in our drawing guide resembles Peach from Disney's Finding Nemo (2003), who was often seen sticking to the aquarium glass.

Did you know? The starfish does not actually have suction cups on its underside. Instead, it has "tube feet." Tube feet use chemicals rather than suction to adhere to objects.

Would you like to draw a colorful starfish? This simple, step-by-step starfish drawing tutorial is here to help. All you will need is a pencil, a sheet of paper, and an eraser. You may also wish to use crayons, colored pencils, or markers to highlight your finished drawing.

If you liked this tutorial, see also the following drawing guides: Nemo, Spongebob, and Cute Narwhal.

1. Begin by drawing a curved line like a rounded, upside down letter "V." Notice how the edges of the "V" flare outward. This forms the first arm of the starfish.

2. From the flared edges of the first "V," draw another rounded "V" on each side. Your starfish now has three arms.

3. Draw two more rounded, "V" shaped lines, completely enclosing the figure. You now have the outline of a five-armed starfish.

4. Draw the starfish's eyes. In the middle of the starfish, below the first arm, draw two ovals. Draw another oval inside each oval. Finally, draw a very small oval inside the other two. Shade between the two smallest ovals, forming the pupil.

5. Draw the starfish's mouth. Outline the smiling mouth using two curved lines. Then, draw a curved line within the mouth to form the tongue. Shade the mouth outside the tongue.

6. Next, begin to draw the tube feet on the starfish's arms. Draw a series of ovals down the middle of each arm.

7. Draw a series of ovals representing tube feet on each of the starfish's remaining arms.

8. Detail and texture the starfish. Draw wavy, curved lines parallel to the edges of its body, as well as small circles of different sizes in various areas across the animal.

9. Give the starfish additional texture by drawing protrusions at the sides of the body. Use one or more curved, "U" shaped lines for each. Erase guide lines as necessary.

10. Color your starfish. This animal comes in a wide range of colors. For example, the leather star is white with orange spots. The morning sun star is pink and yellow. The royal starfish is a deep purple or blue with orange edges. The Pacific blood star is bright red, and the blue sea star is, as its name suggests, blue in color. Be creative!

Would you like to craft your own underwater world? Check out our collection of animal drawing guides, where you'll find deep sea dwellers such as sharks, whales, giant squid, and more

The Complete Cute Starfish Drawing Tutorial in One Image