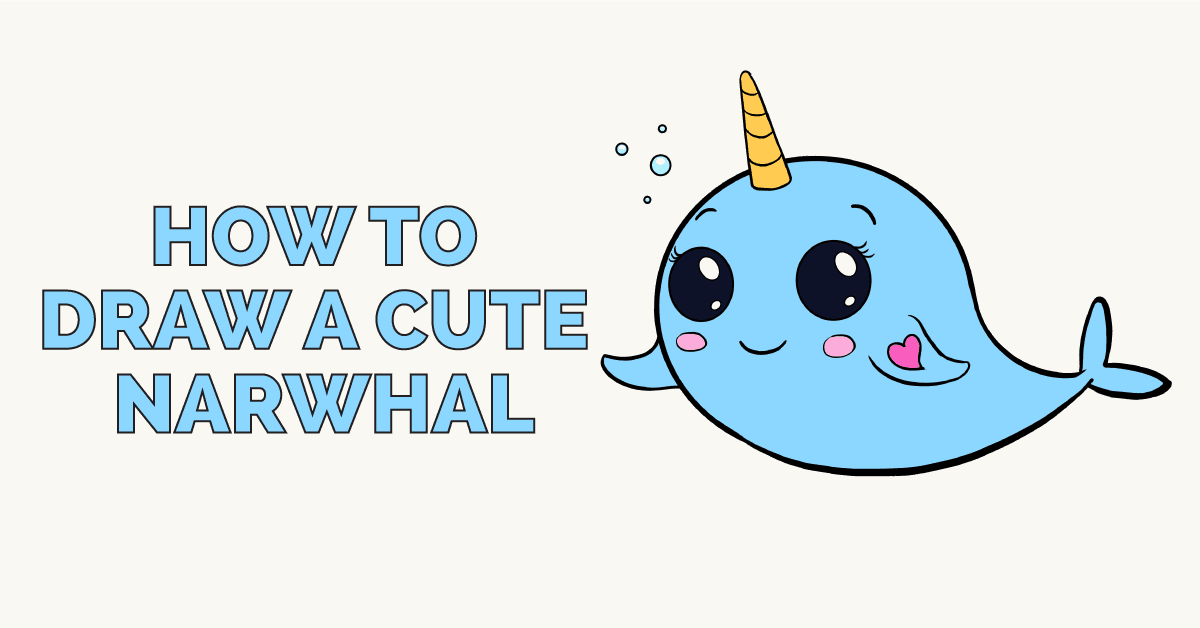 What is a narwhal? Many people have never before heard of this unique creature from the sea. In fact, when ancient peoples found its bony, spiraled tusk, or tooth, lying on the beach, they were inspired to dream up such fanciful creatures as the unicorn (learn how to draw a unicorn).

In Medieval times, these horns were prized, assumed to have magical powers and were worth more than their weight in gold.

Another legend from the Inuit says that a woman hunting with a harpoon was dragged into the water. She was turned into a narwhal, and her hair, which she wore in a spiral, was transformed into the narwhal's tusk.

Narwhals have also been mentioned in famous literary works, such as Twenty Thousand Leagues Under the Sea by Jules Verne and Moby Dick by Herman Melville.

The narwhal, however, is no myth. It is a species of whale found in the Arctic region.

It is a toothed whale, similar to dolphins and orcas. Unlike dolphins, the narwhal has no dorsal fin. The whale grows to 16 feet in length and weighs more than 3,000 pounds.

The long, hollow tusk, which can be taller than a person, occurs only in males and is used in mating displays in which males appear to fight, called "tusking."

The tusk also has sensory organs that tell the whale about its surroundings, and can be used to stun fish with a slap when hunting. Rarely, an individual may have two tusks.

Narwhals travel in groups ranging in size from five animals to several thousand. They migrate yearly, from warm summer waters to feeding grounds beneath northern pack ice in winter. Like dolphins, narwhals communicate using clicks and other sounds. Individuals can live to be 50 years of age.

Would you like to draw a cute cartoon narwhal? Now you can, with the help of this easy, step-by-step drawing tutorial.

All you will need is a pencil, a sheet of paper, and an eraser. You may also wish to use colored pencils, crayons, or markers to color your finished picture.

If you liked this tutorial, see also the following drawing guides: Dolphin, Sea Turtle, and Whale.

​Step by Step Instructions for Drawing ​a​ Narwhal

1. Begin by drawing a circle. This will form the narwhal's head.

2. Extend two lines from the circle in a curved triangle shape; the lines should not touch. This outlines the whale's body and tail.

3. Erase the guide line formed by the original circle.

5. Draw two large circles to form the eyes. Within each eye, draw two small ovals of different sizes. These add a sparkle of cuteness to the eyes.

6. Draw a curved line above each eye to indicate eyebrows. Then, draw a "U" shaped curve between and below the eyes to form the smiling mouth.

7. Use a curved line to draw each pectoral fin, or flipper. The flippers should be roughly like a curved triangle with a rounded tip.

8. On the top of the narwhal's head, draw a tall, narrow triangle with rounded points. This forms the whale's spiral horn, or tusk. Band the horn with curved lines to indicate the spiral.

9. Finish off your narwhal with added cuteness. Draw small circles above the head for bubbles. Draw an oval under each eye to indicate blushing cheeks. Draw a heart on the flipper, and small curved lines above each eye for eyelashes.

10. Color your narwhal. In the wild, narwhals are whitish in color with mottled black or brown spots on the back. Would you like to give her some more cetacean friends? Doing so is easy and fun when you use our whale and dolphin drawing guides.

The Complete Cute Narwhal Drawing Tutorial in One Image

How to draw: Cute Narwhal - all drawing steps