Skip to content
LEARN MORE!
Easy Drawing Guides > easy, other > How to Draw a Fire 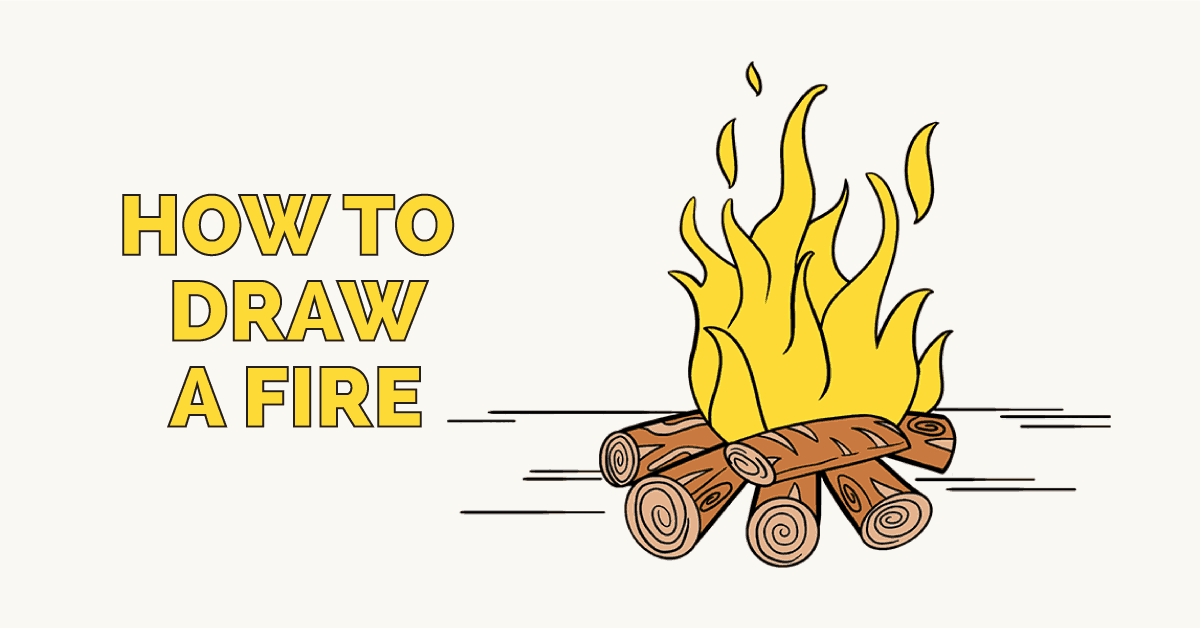 Fire, flame, blaze, ember, inferno. The English language contains many words meaning "fire." There are even more so if you include words that describe the specific uses or types of fire - campfire, bonfire, forest fire, wild fire, torch, arson, back draft, or pyre.

In cultures around the world, fire has been used symbolically to indicate a range of events and emotions - from destruction to rebirth, and from pain to passion and purification. The mythological phoenix was said to vanish in the flames when old, only to emerge from the ashes reborn.

This drawing tutorial focuses on a specific type of fire - the campfire - but the skills learned in this easy, step-by-step drawing guide could be applied to any application in which you need to draw a flame.

All you will need is a pencil and a piece of paper. You may also want to use an eraser to correct any mistakes, and colored pencils, markers, or crayons to color your finished drawing.

Each step of this drawing tutorial is accompanied by an illustration. In each illustration, new lines introduced in the current step are highlighted in blue. Lines drawn in previous steps are shown in black. You may want to sketch lightly at first, as you will be erasing some of your early lines as you go along.

If you liked this tutorial, see also the following drawing guides: Star, Skull, and Heart.

Step-by-Step Instructions for Drawing a Campfire 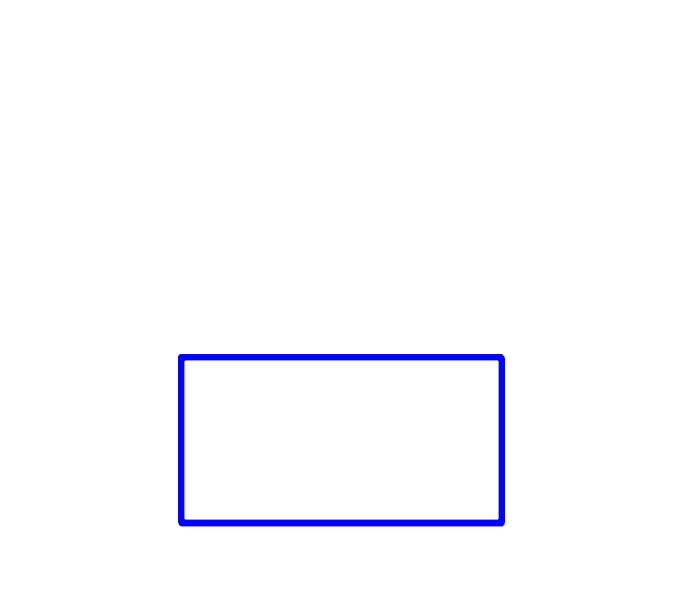 Begin by drawing a rectangle. 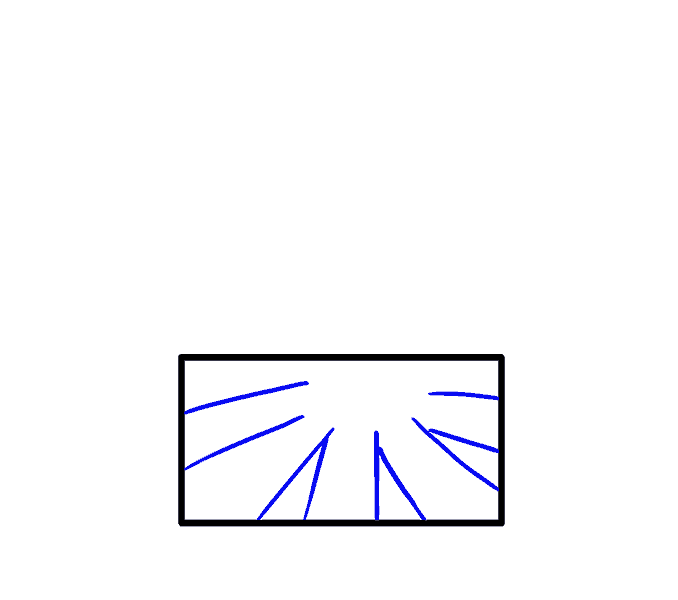 Within the rectangle, draw several lines extending from the center to the edges. The lines will resemble a starburst pattern, and some of the lines may meet in the middle to enclose triangles. 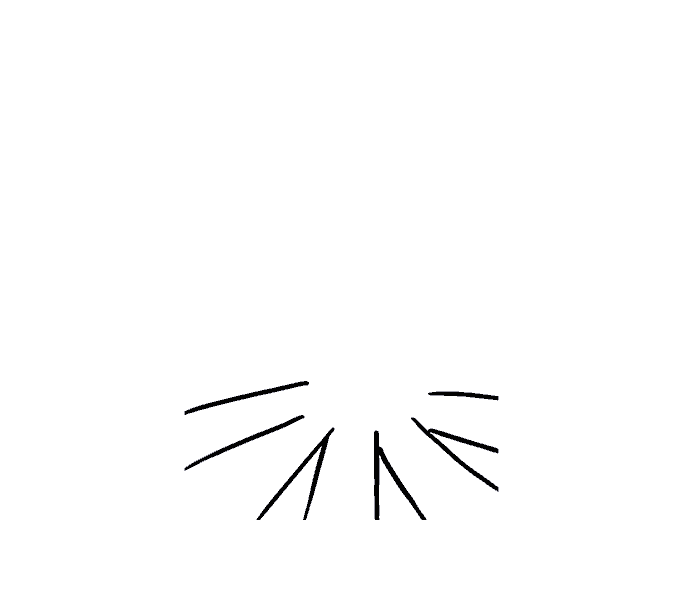 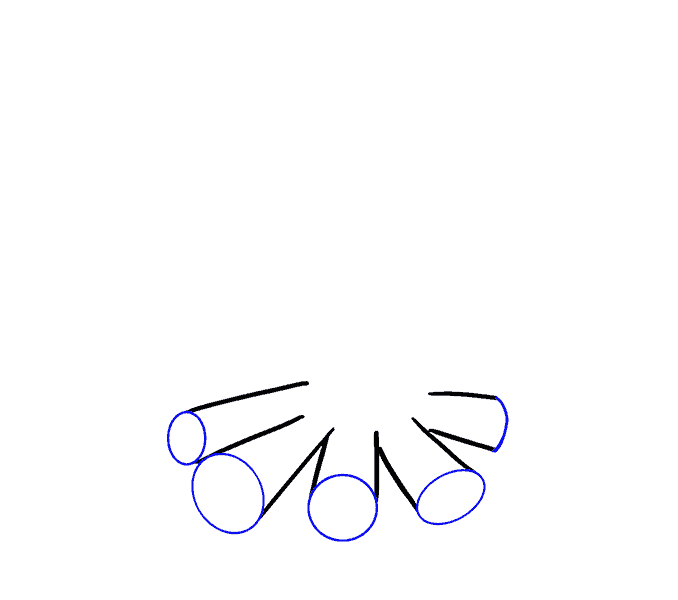 At the end of each set of lines, draw a circle, an oval, or a curved line to connect the lines. 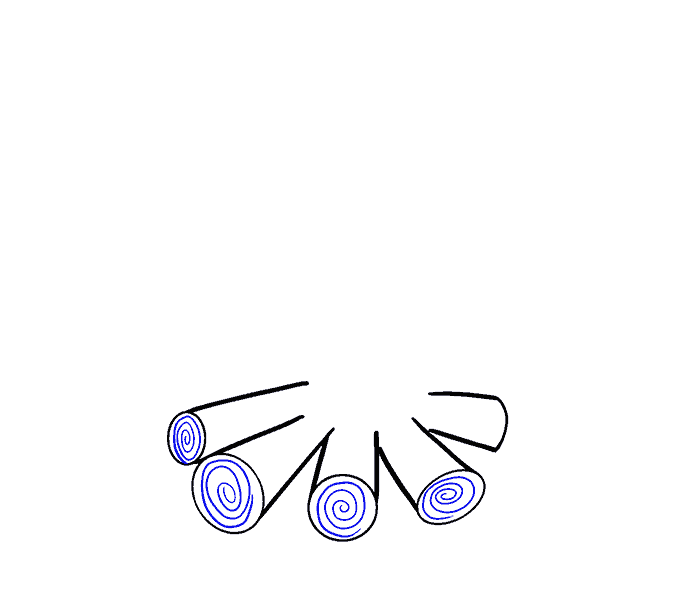 Within each circle or oval, draw a spiral. 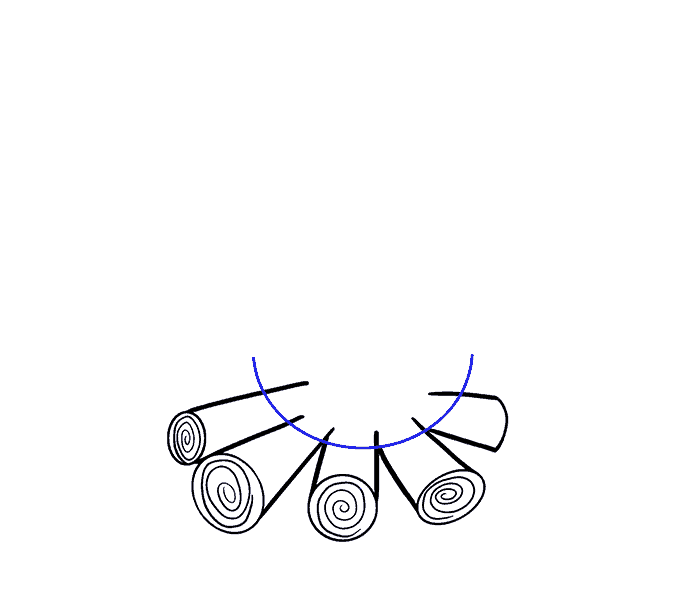 Draw a half circle, open on the top, across the center of the starburst. 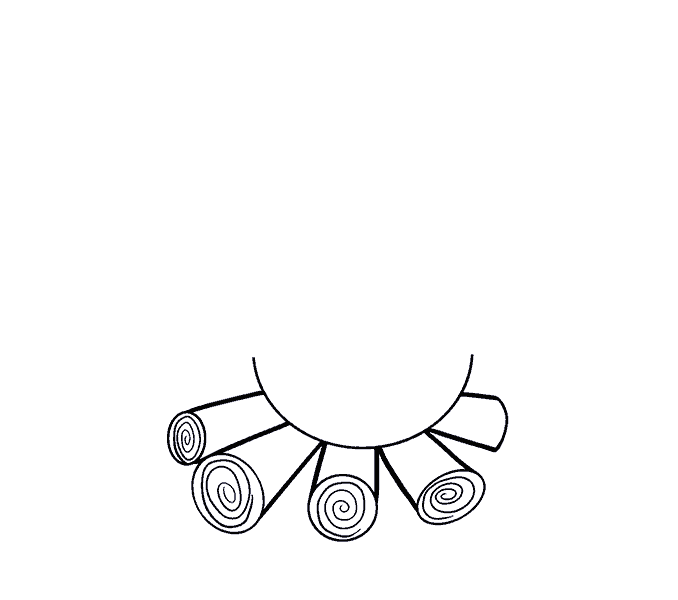 Erase any guide lines that extend into the half circle. 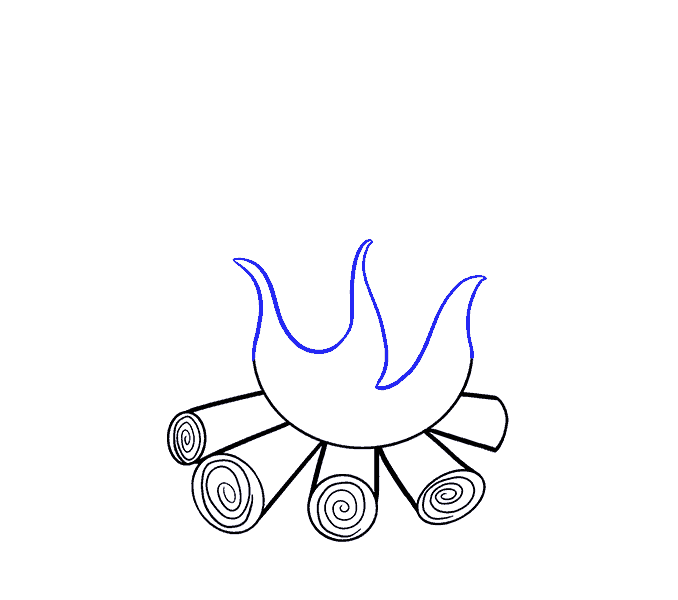 Draw a series of curving, loosely "S" shaped lines above the half circle, meeting in blunt points. These lines should enclose the figure. 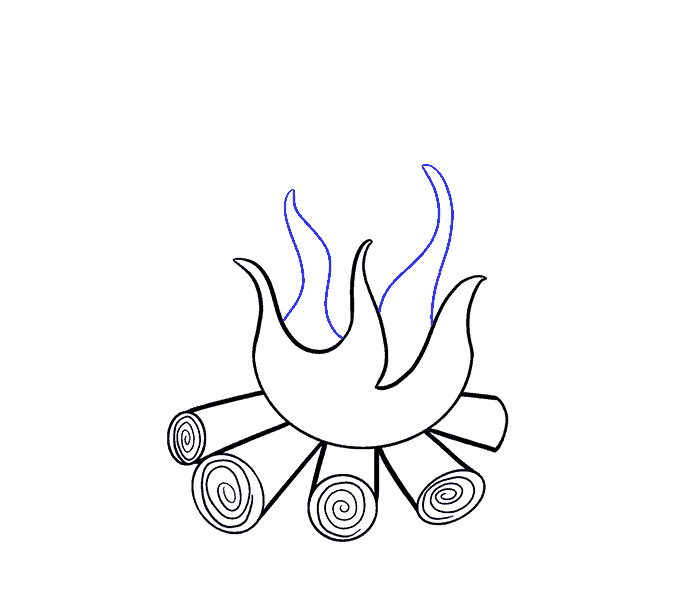 Between the curving tendrils of flame drawn in the previous step, draw more sets of curving lines that meet in blunt points. 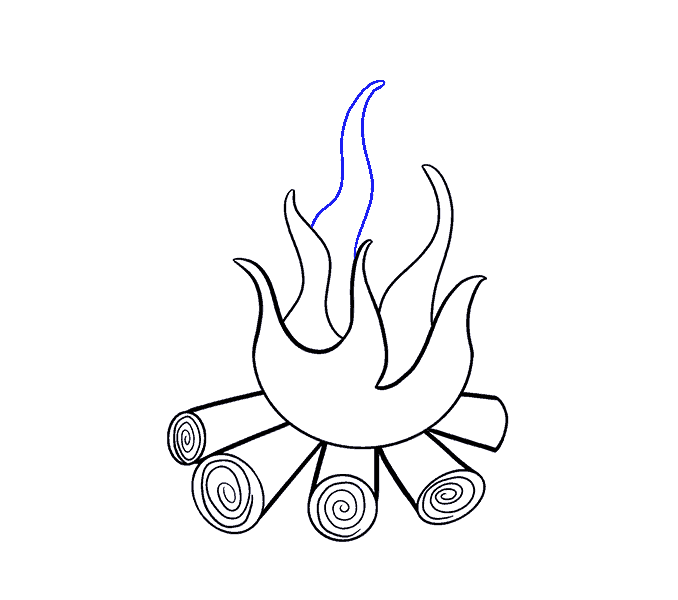 Extend another set of curving lines upwards, ending in a blunt point. 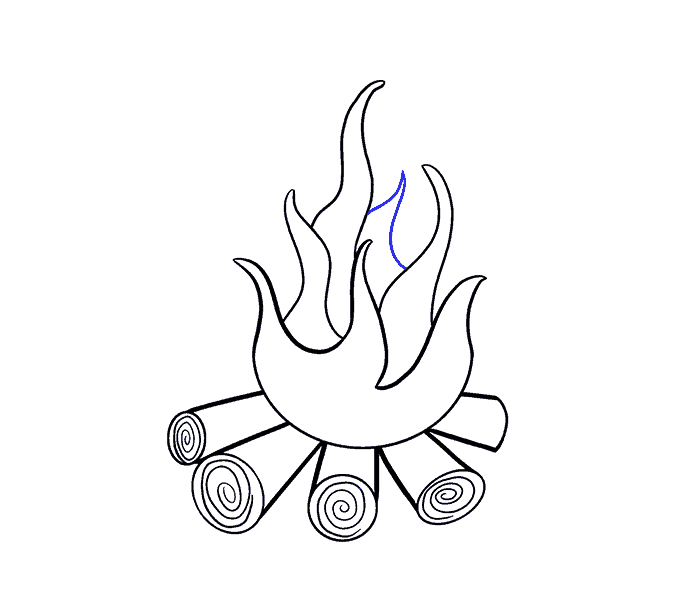 Draw another set of curving lines, ending in a sharp point. 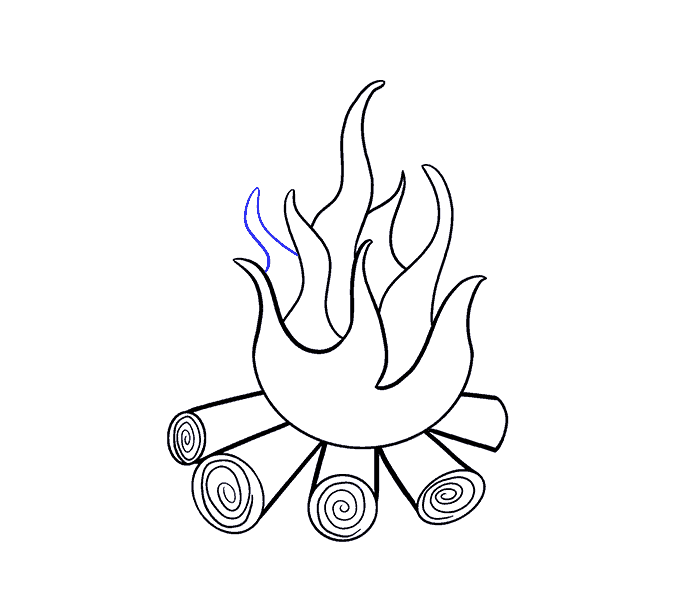 Continue filling in the gaps between the flames. Draw another set of curving lines, ending in a blunt point. 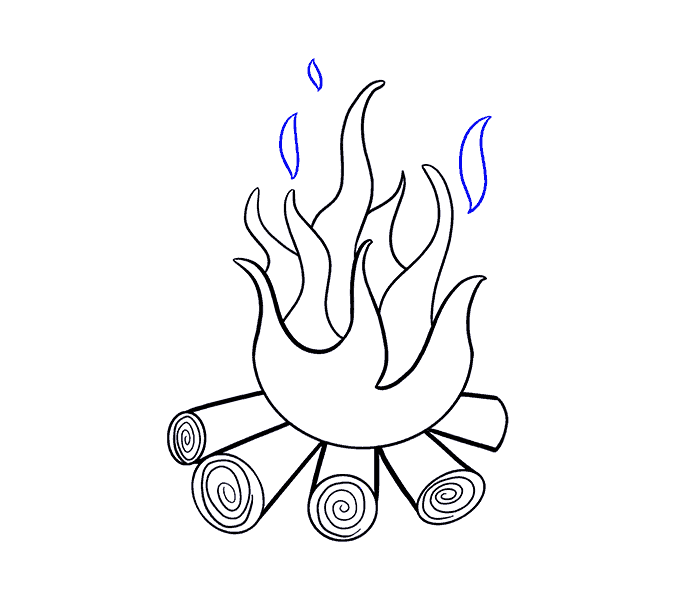 Draw sparks licking up from the flames. Do this by using two short, curved lines to enclose a shape, pointed on the top and bottom. Draw several such shapes above the flames. 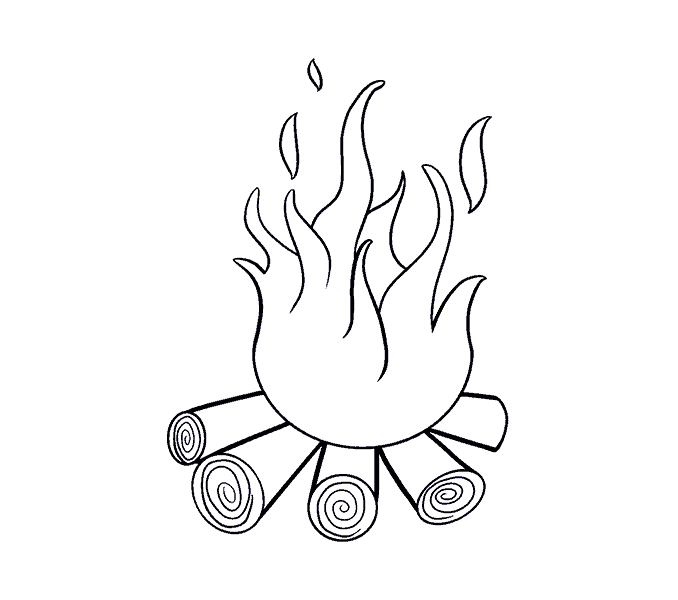 Erase guide lines from within the flames. 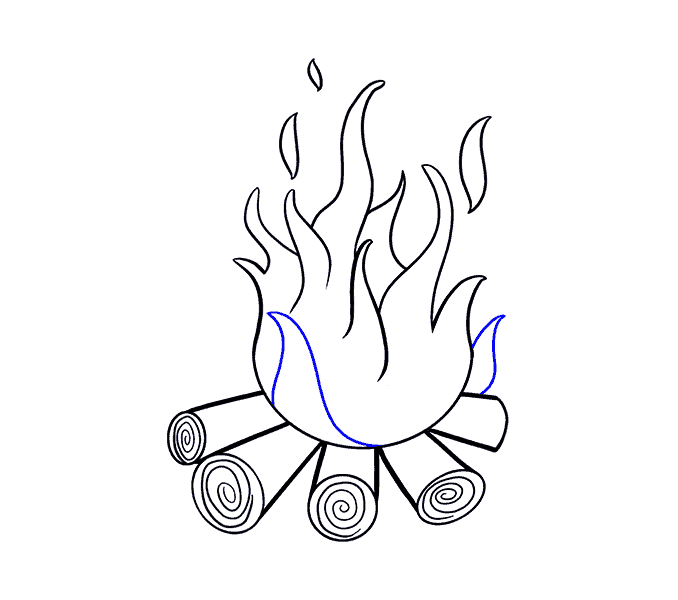 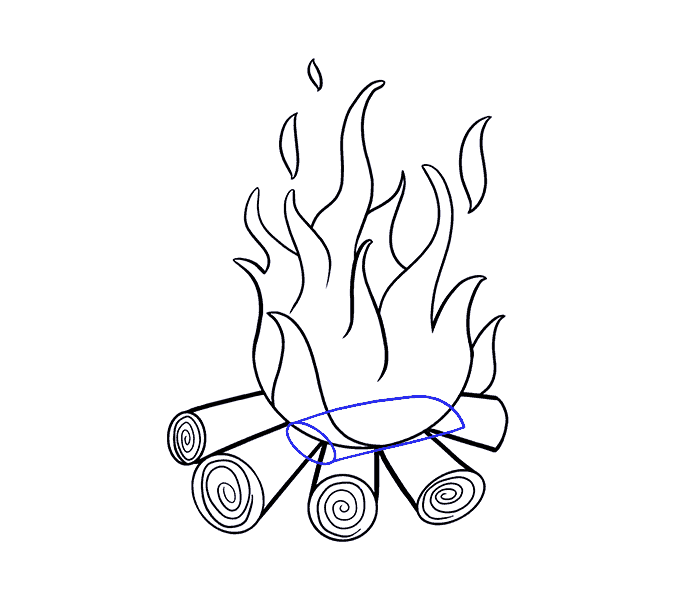 Draw another log at the base of the fire. First, draw two parallel lines. Connect the lines on one end using an oval, and on the other end using a curved line. 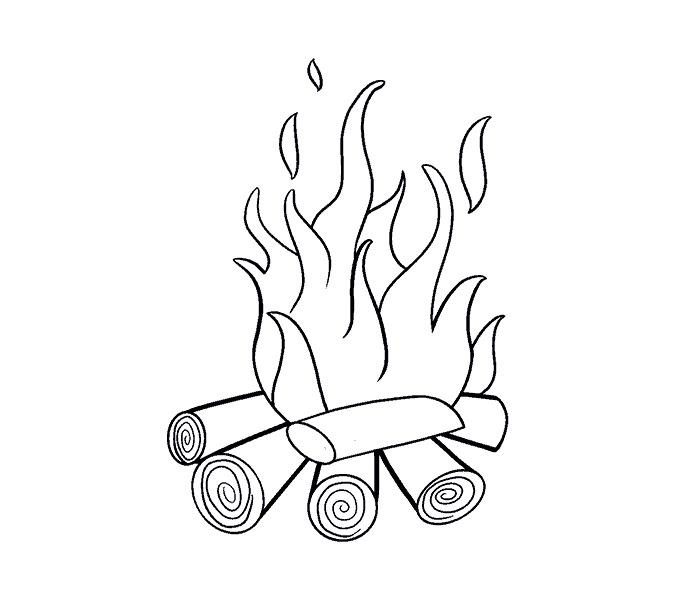 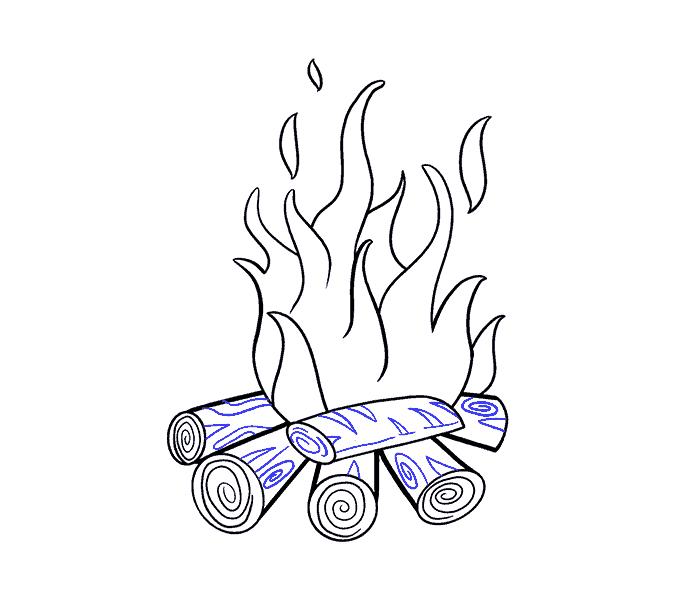 Add texture to the logs. Draw swirling lines, curved lines, and curved triangles to indicate bark on each log.

Give your campfire some ground to stand on. Draw a long, straight horizon line passing behind the base of the fire. Then, draw several more short, straight lines parallel to the horizon to indicate the ground. 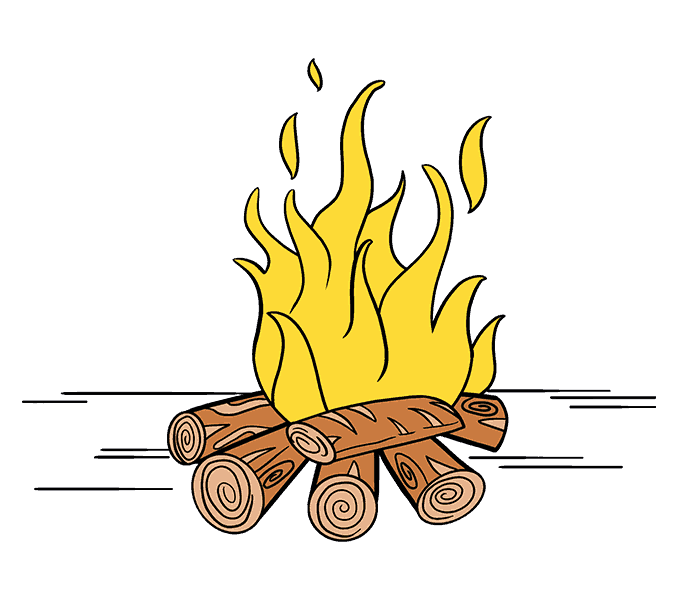 Color your campfire. Flames may naturally range in color from blue and white to yellow, orange, and red.