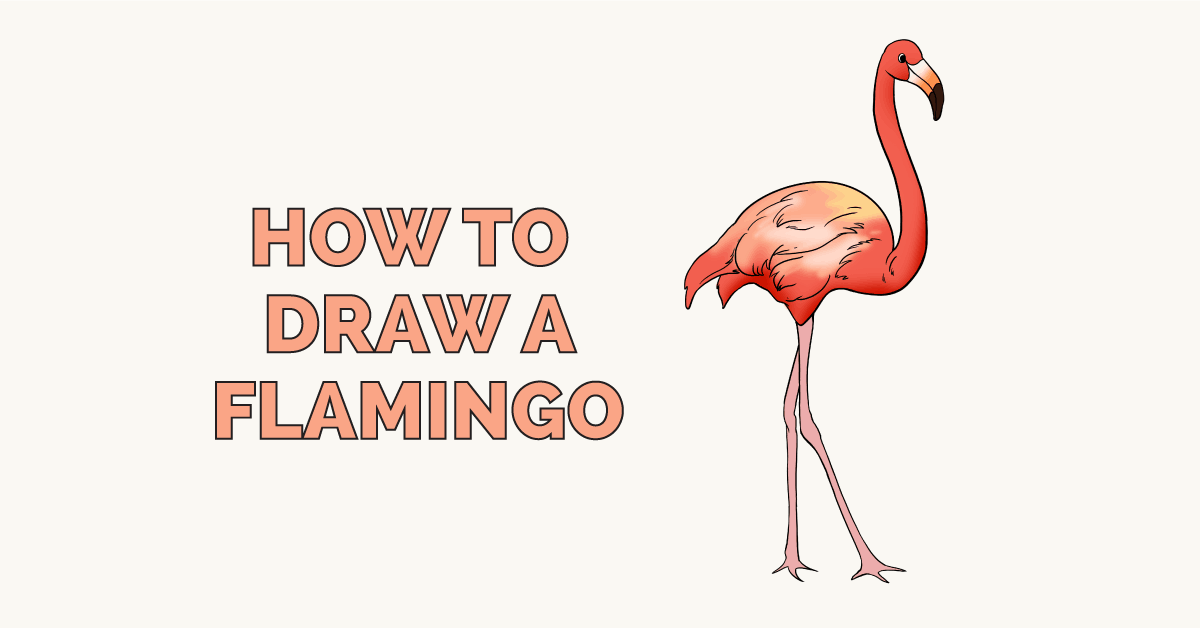 Six species of flamingo live in tropical regions around the world - the Americas, Africa, and Asia. The birds are highly social. In Africa, flocks of flamingos sometimes number into the millions.

The word flamingo comes from the Spanish and Portuguese word flamengo, meaning "flame colored." This was used to describe the flamingo's bright plumage.

The flamingo can be seen on Peruvian pottery dating back 2,000 years. Flamingos are frequently seen in popular culture. In the United States, plastic pink flamingos are popular lawn ornaments. These are seen as symbols of vacations and summer. As such, similar figures can be seen on clothing, accessories, car air fresheners, and much more.

Flamingos also inspire architecture, music, and other artwork. For example, one Las Vegas hotel is known as the Flamingo, and bands and albums have been named after the animal as well.

Would you like to draw a pink flamingo? Doing so is easier than ever with the help of this simple, step-by-step drawing tutorial. All you will need is a pencil, an eraser, and a sheet of paper. You may also use all of your pink markers, colored pencils, and crayons to shade your finished drawing.

If you liked this tutorial, see also the following drawing guides: Waterfall, Palm Tree, and Owl.

​Step by Step Instructions for Drawing​ a Flamingo

1. Begin by drawing a circle. This will form the flamingo's head. Then, extend a pair of parallel, loosely "S" shaped curved lines from the circle. Notice that one line is longer than the other. This forms the flamingo's sinuous neck.

3. Next, draw the flamingo's body. Sketch a large oval at the base of the neck.

4. Detail the contours of the body, including the hips and tail feathers. To do this, extend the long line of the neck into the oval that forms the body, then back out. Connect it once again to the oval, enclosing a lumpy, curved triangle. Then, sketch the tail feathers using combinations of long and short lines to give the tail a bushy appearance. The feathers should resemble downward drooping triangles.

How to Draw an Owl in Cartoon Style

5. Erase the guide lines left by the original circle and oval. Notice that part of the circle is left to differentiate the head from the neck.

6. Draw the first of the flamingo's long legs. Use a set of roughly parallel lines, but note how the lines diverge at the hip, knee, and foot. Enclose the foot using two upside down "U" shaped lines that meet in points to form the toes.

7. Draw the second leg emerging from behind the first, noting the bend of the knee. Again, use "U" shaped lines to enclose the foot, simultaneously forming the toes.

8. Detail the bird's feathers. Use overlapping long and short lines to add texture to the body.

9. Detail the flamingo's face. Draw a shaded dot to form the eye, and connect it to the sides of the face using two curved lines. Draw another curved line down the center of the beak, and a final line crossing it near the tip.

10. Color your flamingo. Healthy flamingos are bright pink in color, due to a nutrient in the food they like to eat. Some flamingos' colors fade to white.

Birds of a feather flock together - why not draw a whole flock of flamingos and give them a tropical home using our waterfall and palm tree. Or, check out other feathered friends with our wide selection of bird drawing guides.

The Complete Flamingo Drawing Tutorial in One Image

How to draw: Flamingo - all drawing steps