Skip to content
Easy Drawing Guides > animal, easy > How to Draw a Hedgehog 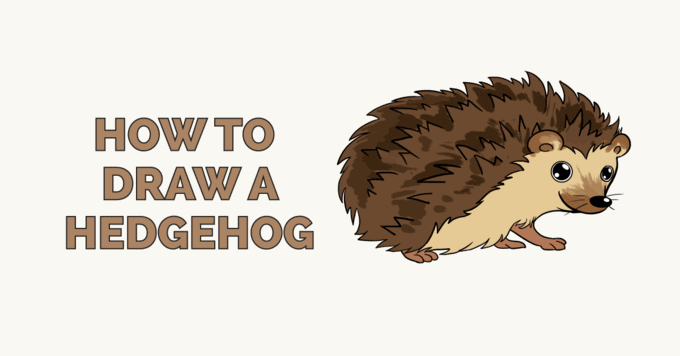 The hedgehog is a small mammal native to Europe, Asia, and Africa. This animal is unique in that its back is covered in thousands of hard spines. When it feels threatened, the hedgehog rolls into a ball, presenting only unappetizing spines to its attacker.

Unlike porcupines, the spines of the hedgehog do not come loose and lodge in the skin of an attacker. They are not to be confused with the similarly spined echidna, an egg-laying mammal native to Australia.

Why is it called a hedgehog? The term "hedge" was used because the nocturnal animal often spent its days under hedges or shrubbery, and "hog" because of its piglike snout. Hedgehogs are insectivores, meaning they eat insects. Did you know? a group of hedgehogs is called an array.

Today, people may keep the hedgehog as a pet, but it also appears in popular culture. Sonic - a blue cartoon hedgehog who can run at lightning speeds - is likely the most famous hedgehog in the world with his companion Shadow claiming a close second.

Long before Sonic was introduced to the world in 1991, Beatrix Potter, author of The Tale of Peter Rabbit, wrote of a different hedgehog character in The Tale of Mrs. Tiggy-Winkle.

Would you like to draw a hedgehog of your very own? Doing so is easier than ever with the help of this simple, step-by-step drawing tutorial. All you will need is a pencil, a sheet of paper, and an eraser. You may also wish to color your finished drawing.

If you liked this tutorial, see also the following drawing guides: Sonic the Hedgehog, Husky, and Gorilla.

​Step by Step Instructions for Drawing​ a Hedgehog

1. Begin by sketching the hedgehog's face. Use overlapping curved lines to craft the side of the face, the upturned snout, and the lower jaw.

2. Begin to sketch the hedgehog's fur. Above the head, use short, curved lines that meet in jagged points to indicate the shaggy fur. Do the same below the head, indicating the fur of the chest and belly.

3. Continue to use short lines of various lengths to craft the fur and pointed spines. Enclose the entire form of the animal in this way.

4. Detail the hedgehog's face. Draw two big, watery eyes, using a circle within a circle for each. Draw an oval and a smaller circle within the inner circle, and shade around these to form the pupil. For the nose, draw an oval at the tip of the snout. Draw a small circle to indicate shine, and shade the nose.

5. Draw a series of short, curved lines connected in jagged points above the face and down the side of the animal. This separates the sharp spines above from the soft fur beneath.

6. Draw "V" shaped lines, some connected and some singular, across the animal's back to indicate the hard spines.

7. Draw the feet using curved lines. Notice how the lines overlap to distinguish the toes.

9. Use several "U" shaped lines to form the rear foot, peeking out from under the protective spines. Draw curved lines on each side of the nose to indicate whiskers.

10. Color your hedgehog. Most hedgehogs are shades of brown, tan, and grey. Some are also albino, lacking pigment in their fur and thus appearing white in color. If you'd like, you can get creative - color your hedgehog blue like Sonic, or black and red like Shadow.

Find more fun and furry friends when you check out our selection of animal drawing guides.

The Complete Hedgehog Drawing Tutorial in One Image

How to draw: Hedgehog - all drawing steps