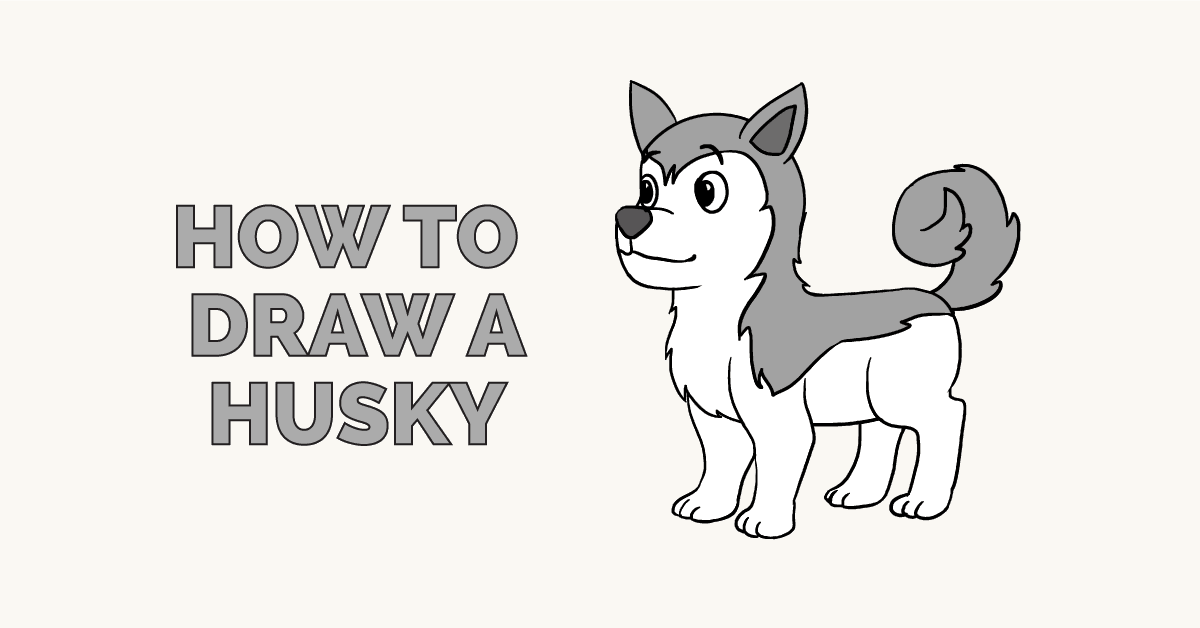 Huskies are working dogs, which means they were bred to do certain jobs along with their human counterparts. Huskies were first raised in Siberia to serve as companions, guards, and sled dogs. Today, many people keep these gentle and intelligent dogs as pets.

The husky is famous for its ability as a sled racing dog. Up to 16 dogs are typically hitched to the sled in tandem, two in each row. In addition to racing, dog sleds are still used as a means of transportation in the snowy Arctic.

Sled dogs have been acclaimed in popular culture, such as in the animated film Balto, the true story of the dogs who delivered vital medicine to Nome, Alaska; Iron Will, another true story of a young musher who needed to win the race to feed his family; and Snow Dogs, a fictional comedy about a dentist who reconnects with his roots.

Would you like to draw a husky? This easy, step-by-step drawing tutorial is here to help. All you will need is a pencil, an eraser, and a sheet of paper. You may also wish to use crayons or something similar.

​Step by Step Instructions for Drawing​​​ a​​ ​Husky

3. ​​​​​​​​​Connect the head and body using a series of short, curved, connected lines. The lines should meet in opposing points to resemble shaggy fur.

4. ​​​​​​​Begin to sketch the husky's face. For each ear, extend two curved lines upward to meet above the head, enclosing curved triangle shapes. For the snout, begin with a large "C" shaped line crossing the side of the face. Then, draw a curved line upwards from the snout to meet the ear.

5.​​ ​​​​​Draw the front legs. For each leg, extend two curved lines downward. Notice how the curves of the line indicate the knees and ankles. Then, connect the lines, using small "U" shaped lines to represent the toes.

6.​ ​​​​​​​​​​​Draw the back legs. For each leg, extend a set of curved lines downward from the body. Notice that on the near leg, the lines have extreme curves near the top to indicate the shape of the thigh and ankle. Connect the leg lines at the bottom using a series of short, "U" shaped curved lines to represent the toes.

7. ​Erase the guide lines from the head, body, and legs, leaving a clean outline of your husky.

8.​​​ ​​​Add detail to the husky. Draw a curved triangle within the bounds of the near ear. Distinguish the husky's lighter face and underbelly from its darker back using a series of connected, curved lines. The lines should meet in jagged points to indicate fur. Notice the way the line dips into the nose and onto the shoulder. Then, draw the tail. Use a series of curved and overlapping lines to sketch the curly tail.

9.​​ ​Add detail to the husky's face. Draw an oval within an oval to form each eye. Then, draw a small circle inside the inner oval, and shade between the shapes. Draw a curved line above each eye to indicate the eyebrows. For the nose, sketch a rounded, upside down triangle. Use curved lines to sketch the mouth.

Would you like to draw more of man's best friend? Sharpen your skills with our list of the 50 best dog drawing tutorials.

The Complete Husky Drawing Tutorial in One Image

How to draw: Husky - all drawing steps