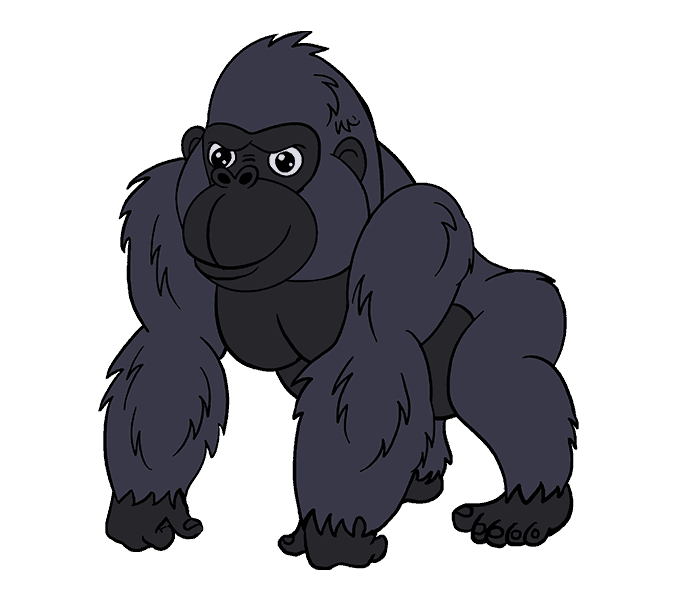 Gorillas are large primates of the group known as the Great Apes, native to the African continent. Several subspecies of gorilla have been documented, ranging in habitat from jungles to mountain forests.

While the gorilla has appeared in the art of its native land for millennia, it did not enter western popular culture until the 1800's. Gorillas were then depicted either in natural history publications or as fearsome monsters, such as in the film King Kong (1933). Modern animation has seen a number of gorilla characters, notably the many gorillas in Disney's Tarzan (1999), including Terk, Kala, and Kerchak, and DC Comics’ super villain, Gorilla Grod.

Would you like to draw your very own cartoon gorilla? Doing so is easy, with the aid of this simple, step-by-step drawing tutorial. All you will need is a pencil and a piece of paper. As you go along, note that new lines drawn in each step are highlighted in blue, while lines drawn in previous steps fade to black.

You may also want to have an eraser handy to correct mistakes and remove guide lines. Use crayons, colored pencils, markers, or paints to shade your finished drawing.

If you liked this tutorial, see also the following drawing guides: Penguin, Monkey, and Elephant. 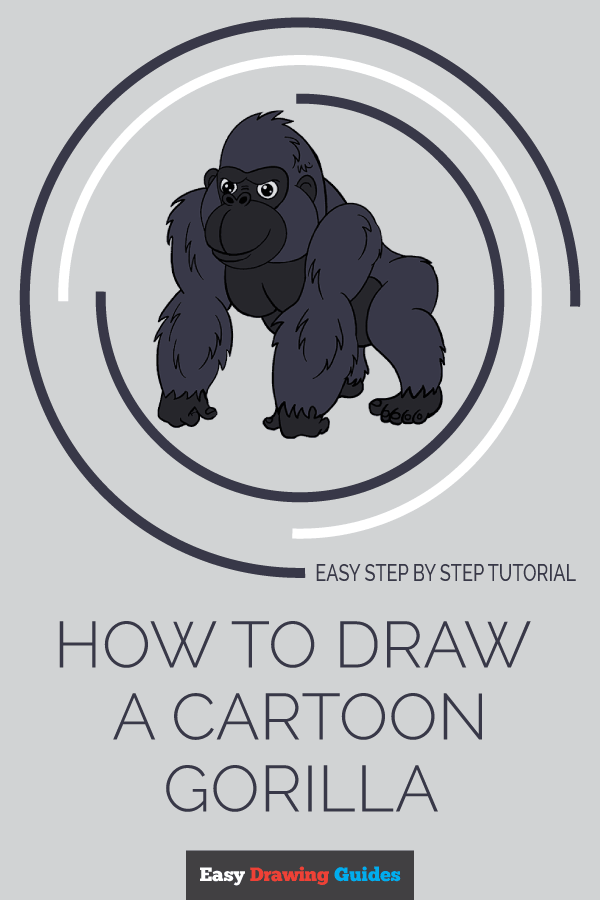 Step-by-Step Instructions for Drawing a Gorilla 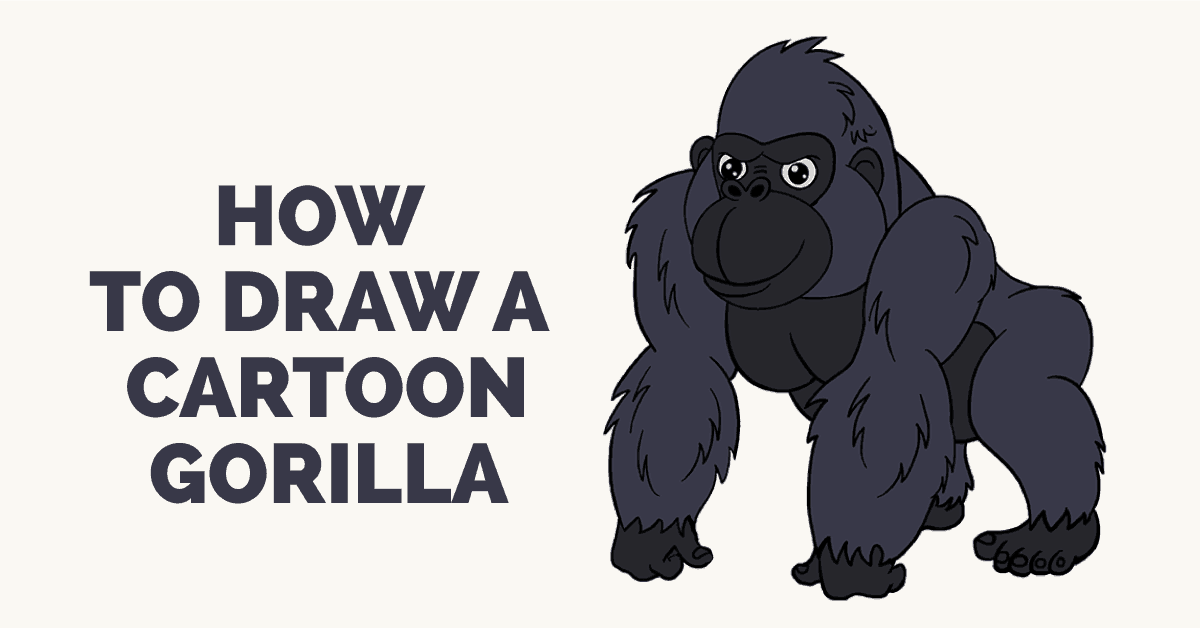 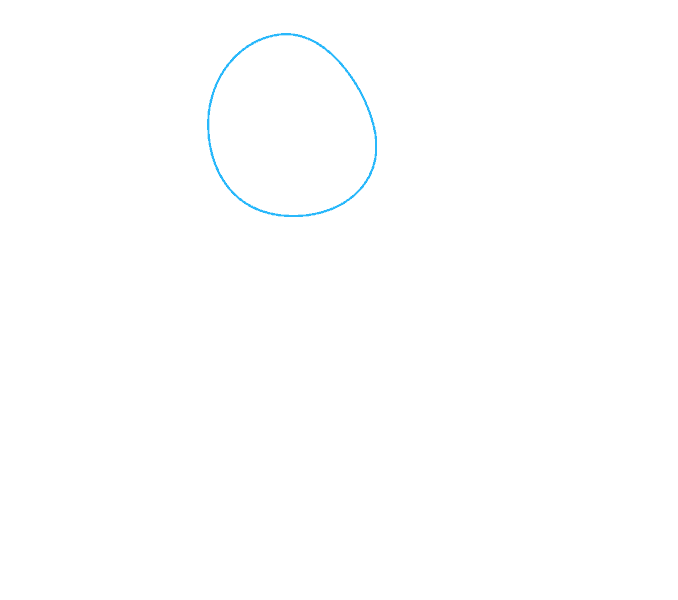 Begin by drawing an irregular circle to outline the gorilla's head. 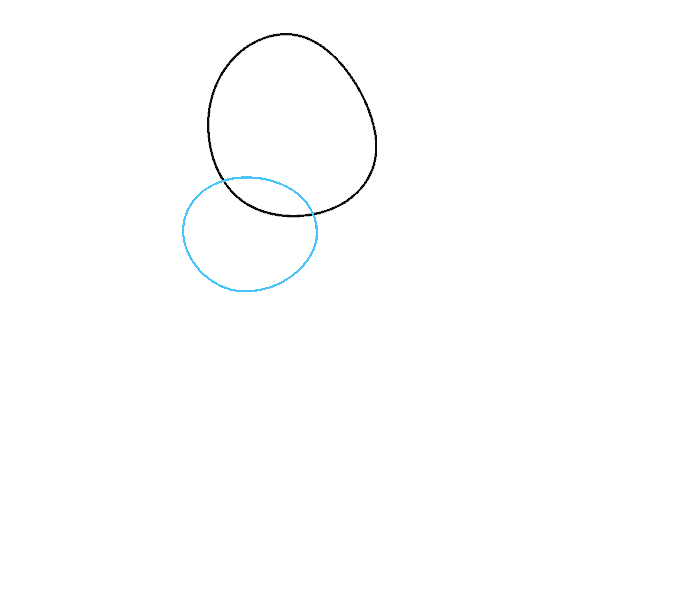 Next, draw a smaller circle overlapping the first. 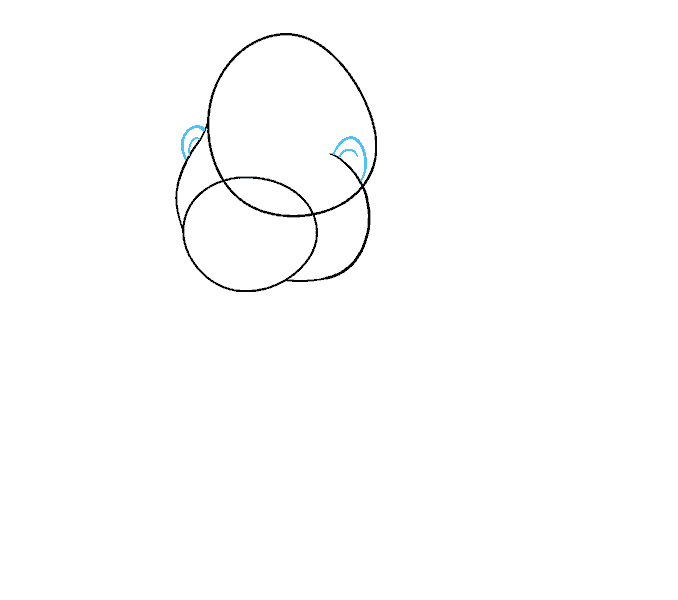 On each side of the face, enclose an ear using a curved line. Draw a curved line to add detail within each ear. 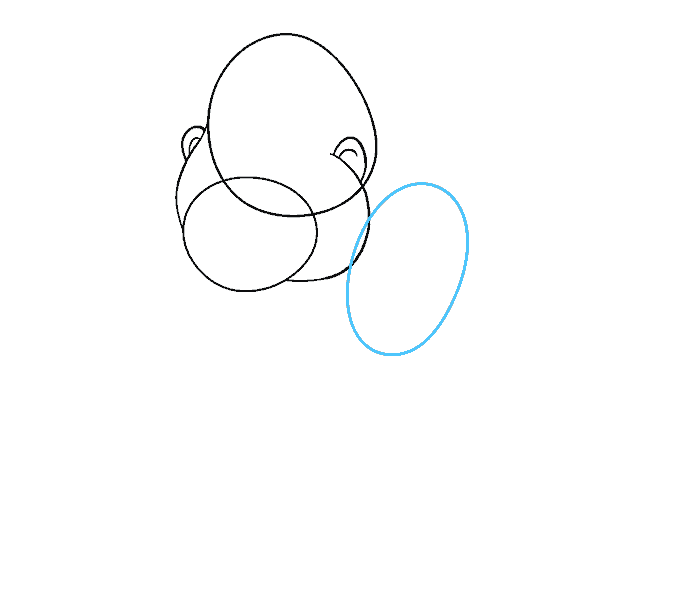 Draw an oval slightly overlapping the side of the face. This oval is the beginning of the gorilla's shoulder. 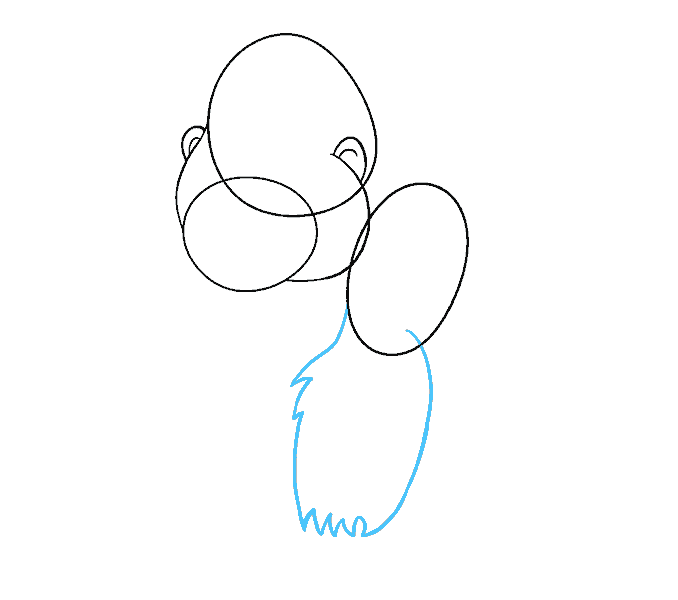 Below the oval, enclose the forearm using a series of curved lines. Allow the lines to meet in jagged points, indicating fur. 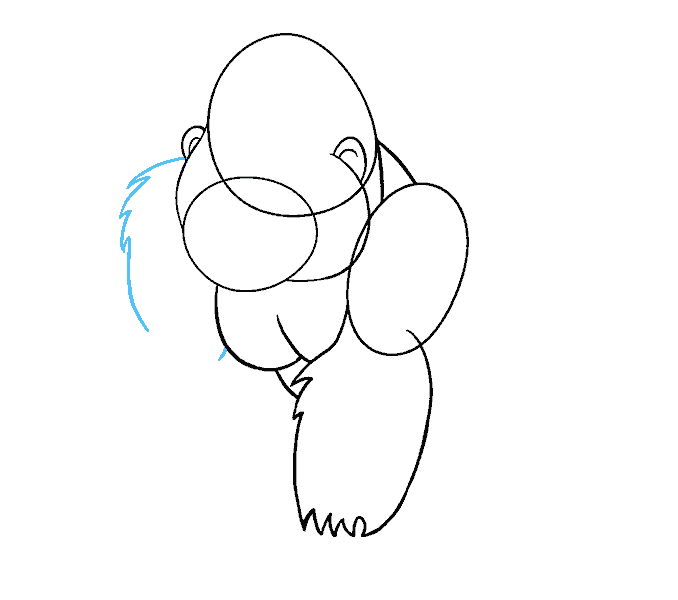 Draw the other arm. Extend a short, curved line from the chest and a series of curved lines from the shoulder. Allow the lines to meet in jagged points, forming fur. 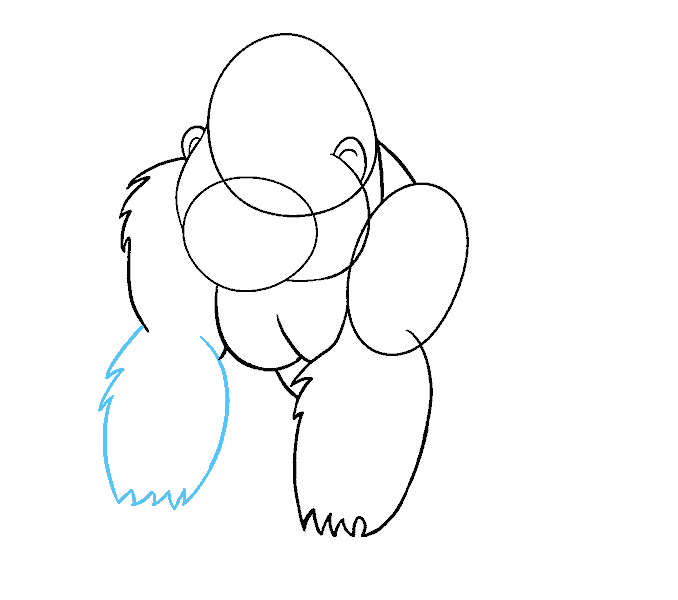 Draw the lower arm using a series of curved lines, allowing the lines to meet in jagged points. 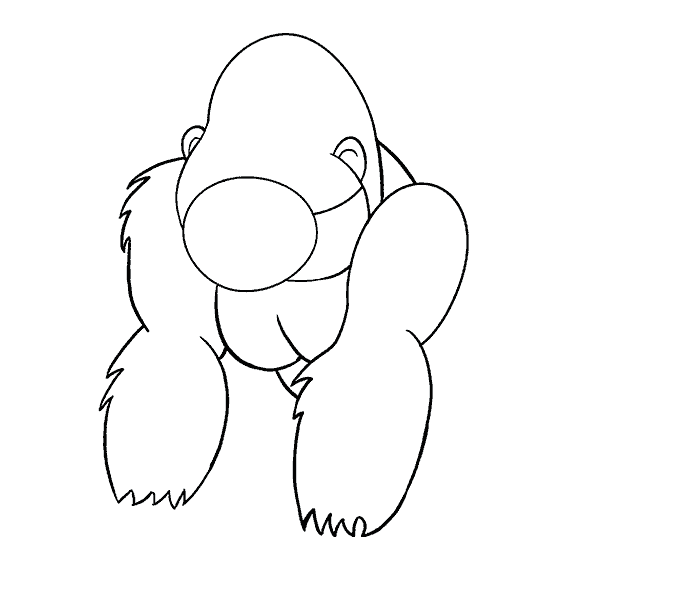 Erase guide lines from the head and arms. 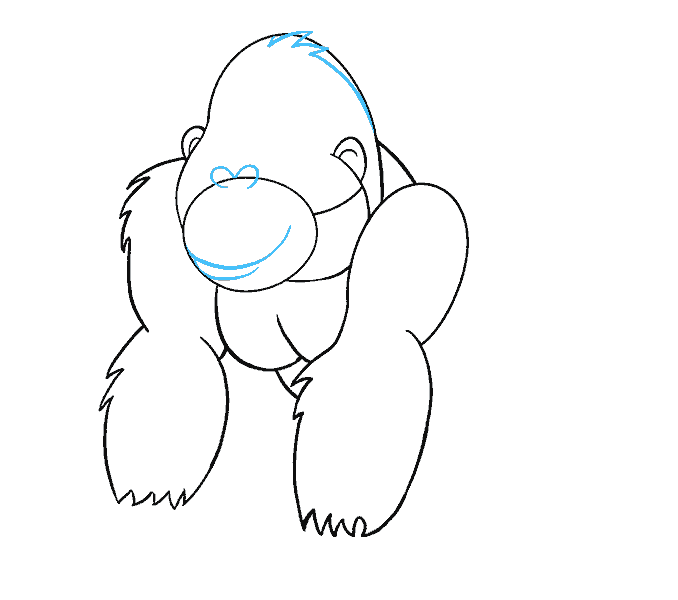 Detail the top of the head using short, curved lines that meet in jagged points. Draw the nose using two upside down "U" shaped lines. Draw two curved lines to indicate the mouth. 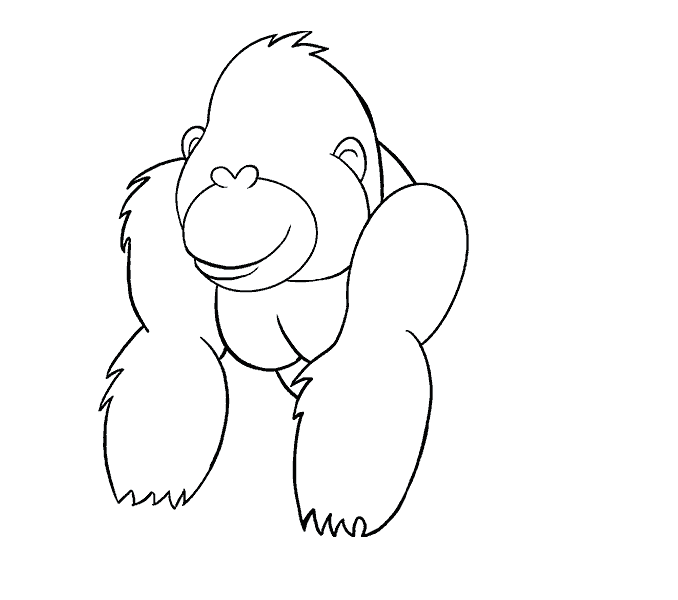 Erase the remaining guide lines from the head. 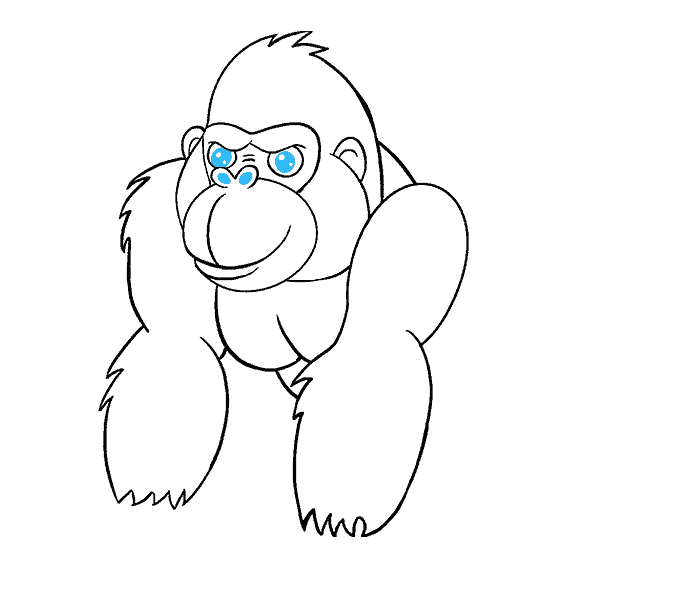 In each eye, draw a circle with two smaller circles inside it. Shade between the circles. Draw an oval in each portion of the nose, forming nostrils. Shade the nostrils. 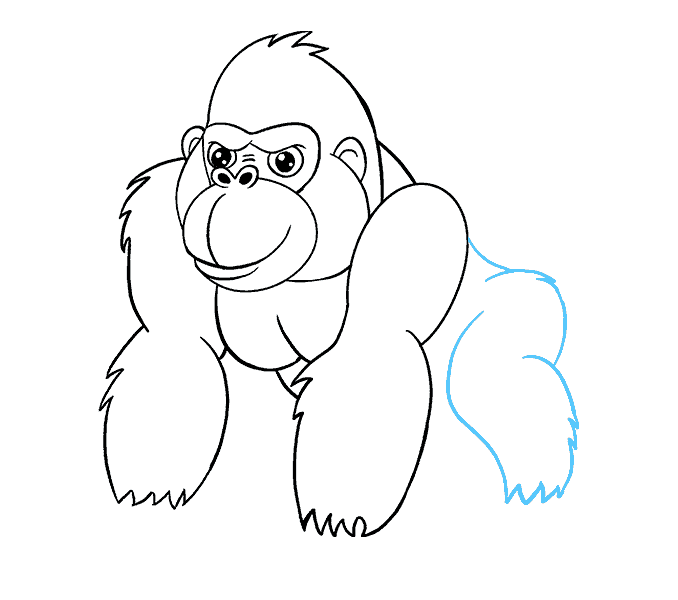 Draw a series of curved lines, extending from the shoulder, to form the back, rump, and rear leg. Allow the lines to overlap at the hip and knee joints. Connect some of the lines in jagged points, forming the appearance of fur. 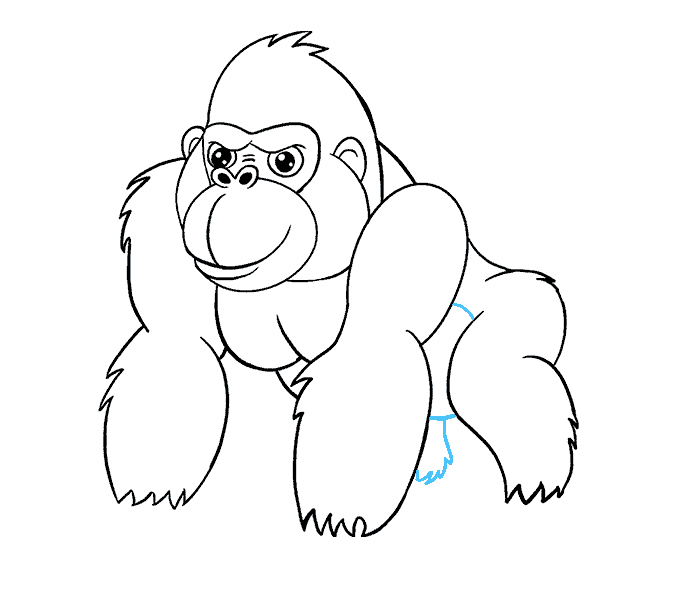 Draw two curved lines between the rear leg and arm, outlining the stomach. Draw the far rear leg in the background, using a series of curved lines connected at jagged points. 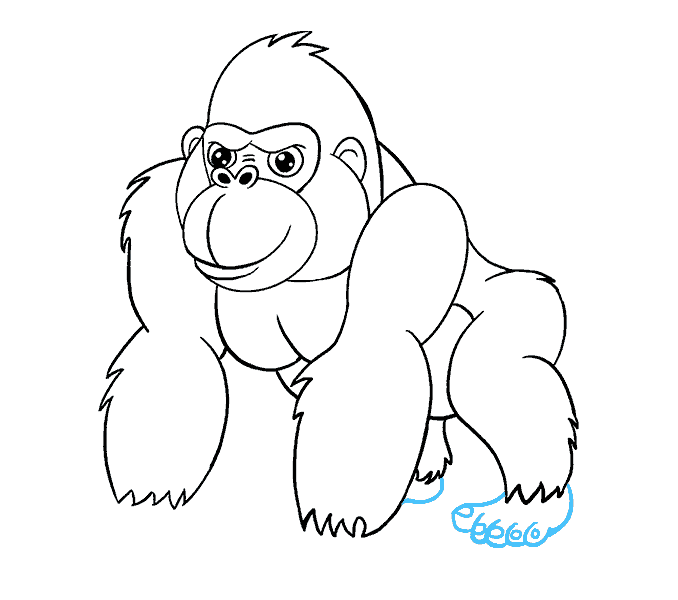 Draw the hands using a series of curved lines. Use a "U" shaped line to form each thumb, and draw a fingernail on the tip of the thumbs. Note how the gorilla supports itself on its fingers. 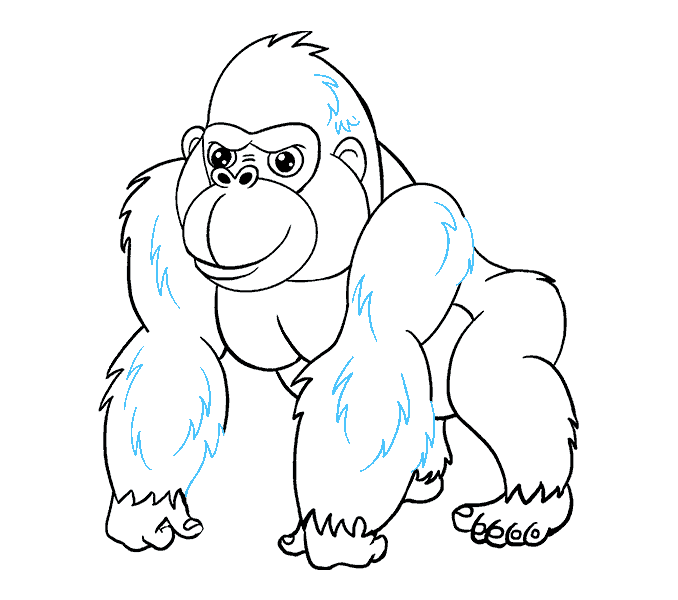 Add the detail of fur to the head and arms. Draw short, connected, curved lines that meet in jagged points.

Color your gorilla. Gorillas typically have black or dark brown fur. Males, called silver backs, have a patch of white or grey fur on their backs. 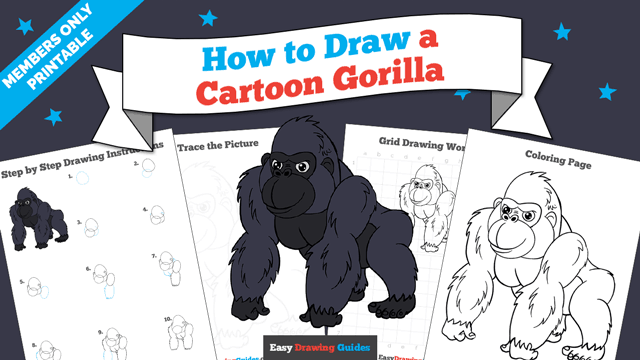