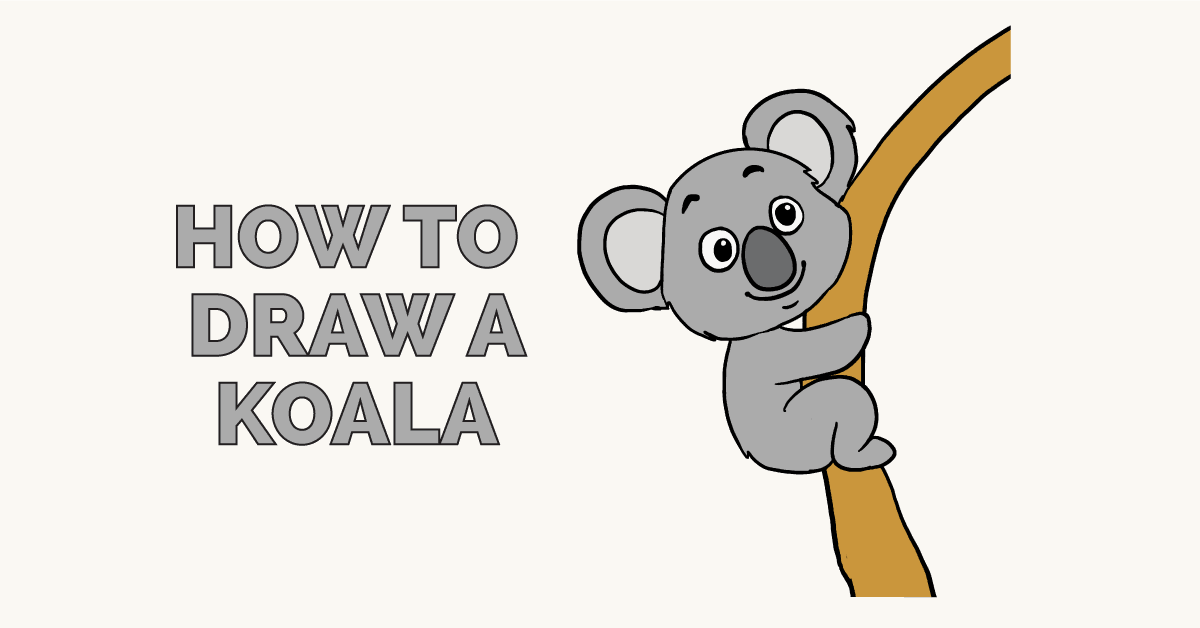 ​G'day, mate! Would you like to draw an animal from the Land Down Under? Now you can, with the help of this simple, step-by-step drawing tutorial. All you will need is a pencil, an eraser, and a sheet of paper. Crikey, that's easy. But first, let's learn a little bit about this unique animal.

Koalas live in Australia. This large island is home to many animals that are like nothing else in the world. For example, most marsupials come from Australia. Marsupials are animals that carry their babies in a pouch. Koalas are marsupials, as are kangaroos. Baby koalas are called joeys. Even though some people call them koala "bears," they are not bears at all - bears do not have pouches!

Koalas eat the leaves of the eucalyptus tree, which are poisonous to other animals. A special digestive system allows them to consume this tough plant. The oils from the leaves may make the animal smell like cough drops! They rarely come down from their trees, and they sleep in tall branches up to 18 hours per day.

Did you know? Koalas are cute and generally move slowly, but don't try to pick one up! Frightened koalas will growl, scratch, and bite in order to protect themselves. If you'd like to pet a koala, you can visit one of Australia's many animal parks or zoos, where rescued koalas are presented by trained handlers.

In the past, koalas where hunted, and farms and cities have been built where forests once stood. For these reasons, the koala is considered an endangered species in Australia. Conservation programs are working hard to introduce more koalas into the wild, treat sick or injured koalas, and protect the eucalyptus forests that they call home.

​Step by Step Instructions for Drawing​​​ a​​ Koala

2. ​​​​​​​​Draw a circle, allowing it to overlap the side of the tree branch. This will form the koala's head.

How to Draw a Baby Bunny

5.​​ ​​​​Using a curved line, draw the koala's arm. Extend the line from the bottom of the head, across the tree, and double it back upon itself.

6.​ ​​​​​​​​​​Beneath the arm, begin to draw the leg using a "C" shaped line. Beneath this, use another curved line to form the foot. Draw a long, curved line from the foot to the head, enclosing the animal's body.

8.​​​ ​​Draw the koala's large, furry ears. Enclose a rounded shape by drawing a "C" shaped line on each side of the head. Enclose another circular shape around the first. Allow the lines to overlap a bit, giving the impression of fur.

9.​​ ​​​​​​​​​​​​Detail the koala's face. Draw a large, egg shaped oval to form the nose. On each side of the nose, draw a small circle to form the eyes. In each eye, draw a tiny circle within a circle. Shade between the two circles, indicating the pupil. Use a wide "U" shaped line to form the smiling mouth, and use a short curved line to indicate the chin. Draw a thick curved line above each eye to indicate eyebrows.

Give your koala a home using our handy forest drawing guide.

The Complete Koala Drawing Tutorial in One Image

How to draw: Koala - all drawing steps