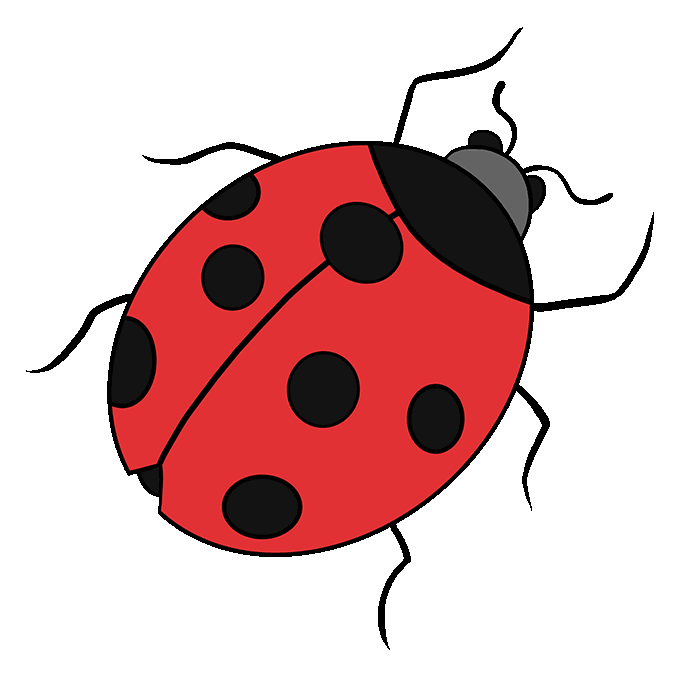 "Ladybug, ladybug, fly away home.
Your house is on fire, and your children are home!"
- A classic nursery rhyme.

Ladybugs, also called lady beetles or ladybird beetles, are a variety of insect found all over the world.

Around 6,000 species have been identified. In general, they are very helpful garden insects, eating the aphids that destroy many garden plants.

It was once thought that the number of spots on a ladybug's back indicated its age in years, but this is now known to be a myth.

Instead, the number of spots and their pattern can be used to identify the variety of ladybug in question. Young ladybugs, called larva, resemble tiny caterpillars that range in color from white to black with orange spots.

In many cultures throughout history, the ladybug has been considered a symbol of good luck, and images of the beetle are thus used to adorn clothing and other objects.

Today, ladybugs are the logo of choice for such diverse companies as booksellers, clothing makers, and software developers.

One of the most memorable depictions of a ladybug in film is that of Francis in Disney and Pixar's A Bug's Life (1998). Despite being a "lady" bug, Francis makes it clear that this species of insect includes males, as well.

He says to a fly, "Just because I'm a ladybug, that automatically makes me a girl - is that it, Flyboy?" Says the fly: "She's a guy!"

Would you like to draw your very own ladybug? With the help of this simple drawing tutorial, doing so is easy. All you will need is a pencil, a piece of paper, and perhaps an eraser.

You may also wish to use markers, crayons, paints, or colored pencils to shade your finished drawing. Notice that each step includes both an illustration and explanatory text. New lines in each step are highlighted in blue.

If you liked this tutorial, see also the following drawing guides: Spider Web with Spider, Bee, and Butterfly. 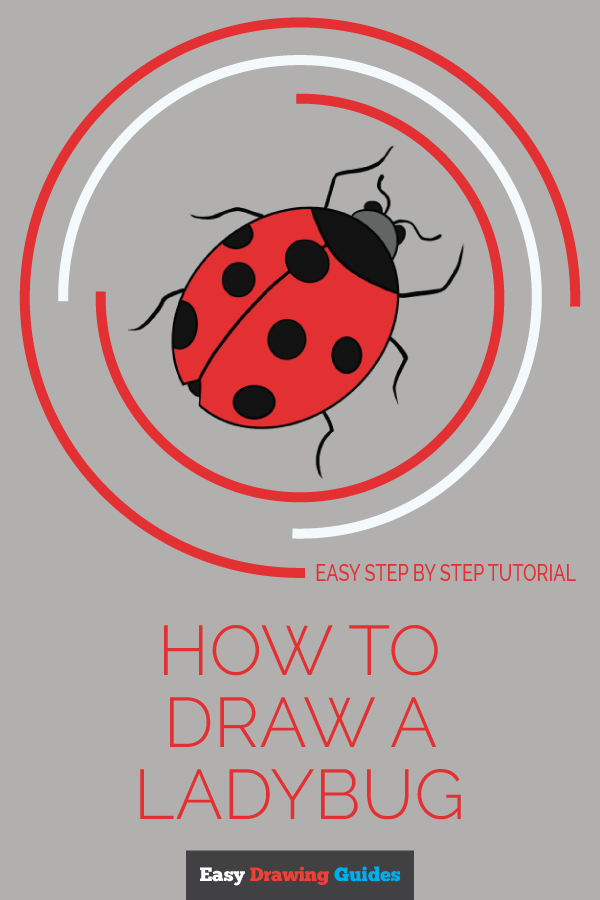 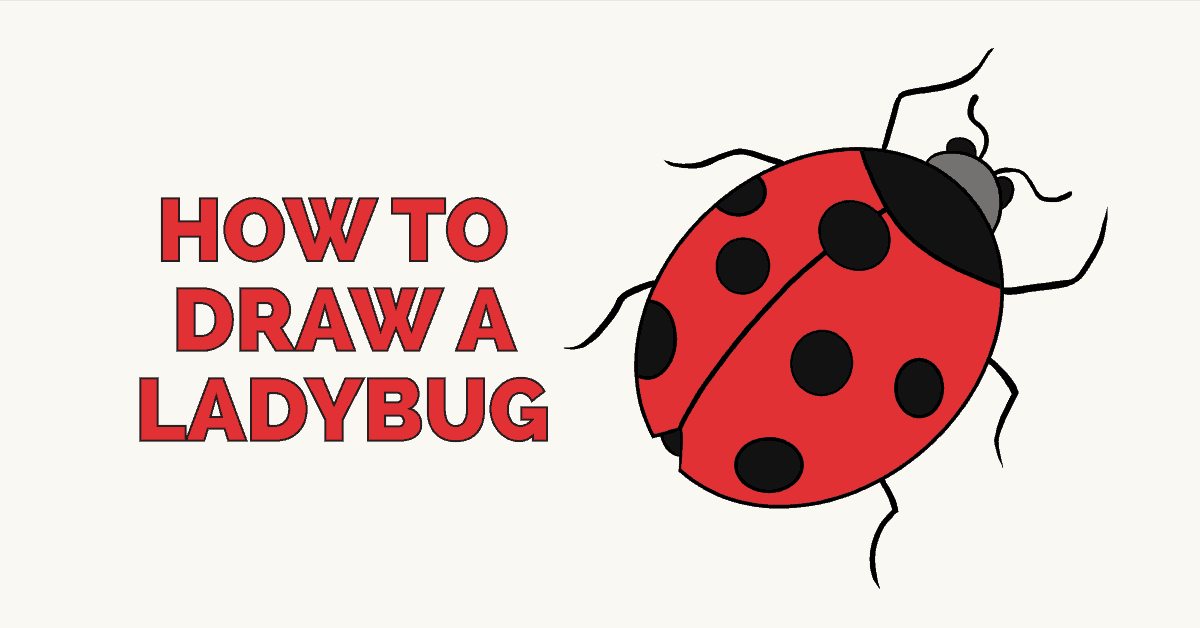 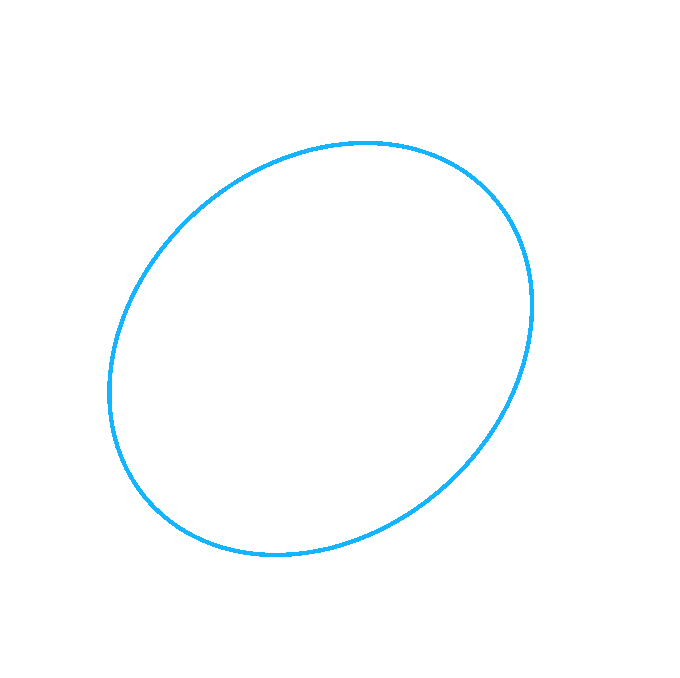 1. Begin by drawing an oval to form the cartoon ladybug's body. 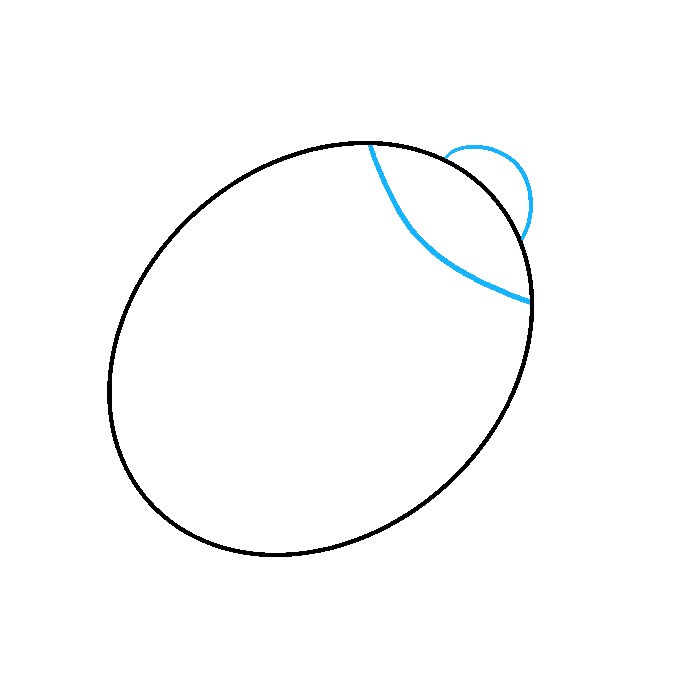 2. Draw a small half circle at one end of the oval. This will form the cartoon ladybug's head. Then, draw a curved line across the body behind the head. This indicates the thorax, or middle body section, of the bug. 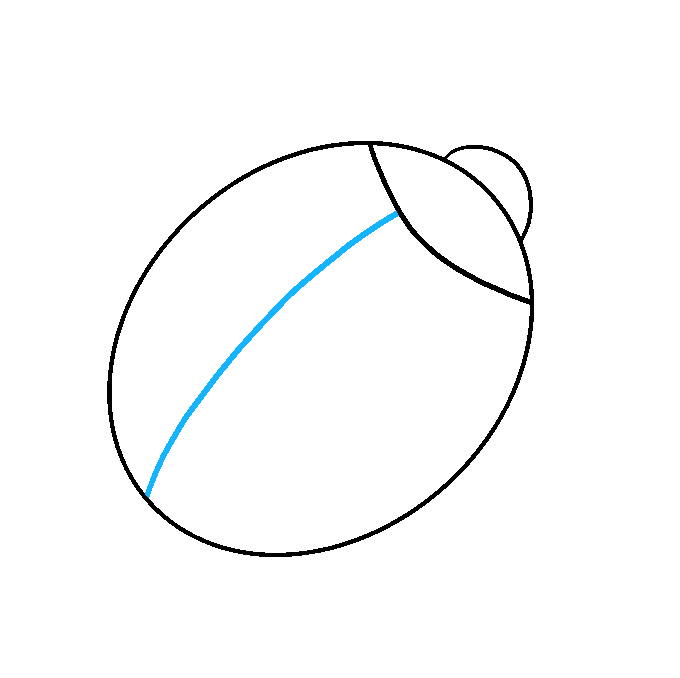 3. Draw a long, curved line down the length of the ladybug's back. This indicates the split in the ladybug's shell, which allows it to deploy its wings and fly. 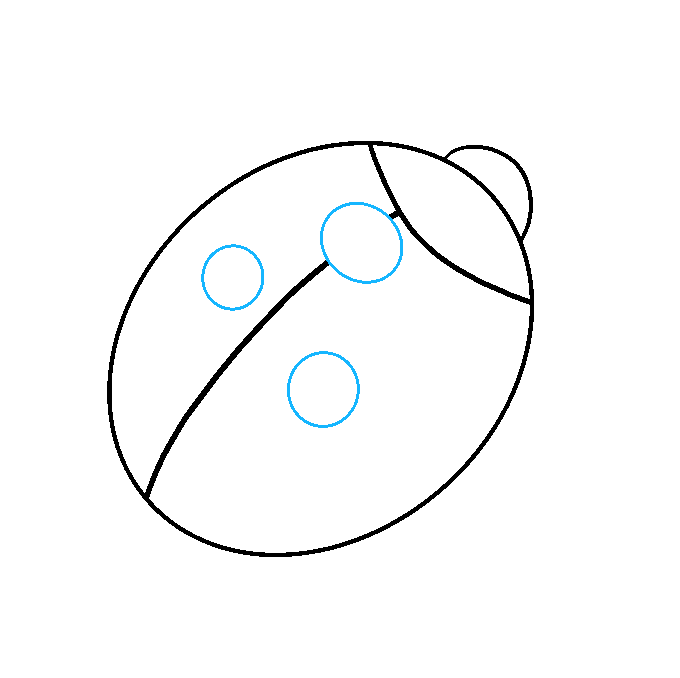 4. Draw a few small spots on the ladybug's back. Erase guide lines as necessary. 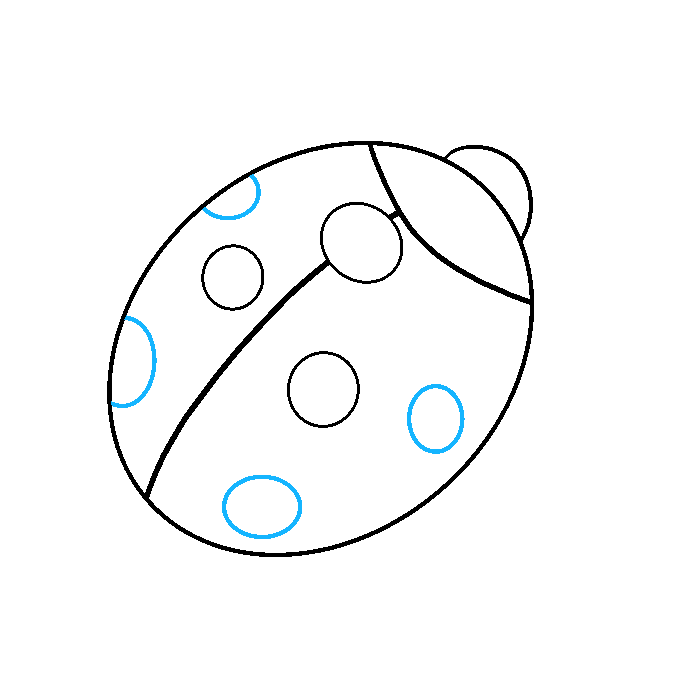 5. Draw more spots on the ladybug's back. 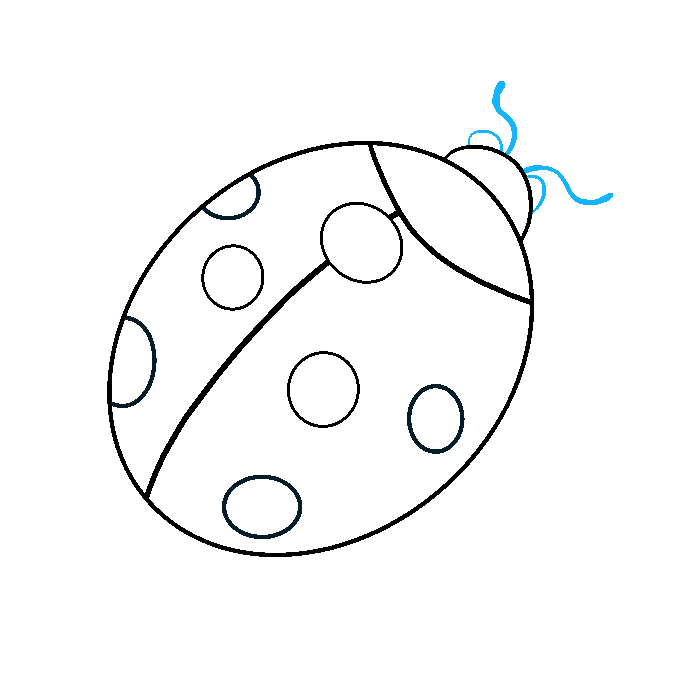 6. Extend two curved lines from the middle of the ladybug's head. These lines form the antennas, sensory organs that the bug uses to smell. On each side of the antennas, draw a tiny half circle to form the beetle's eyes. 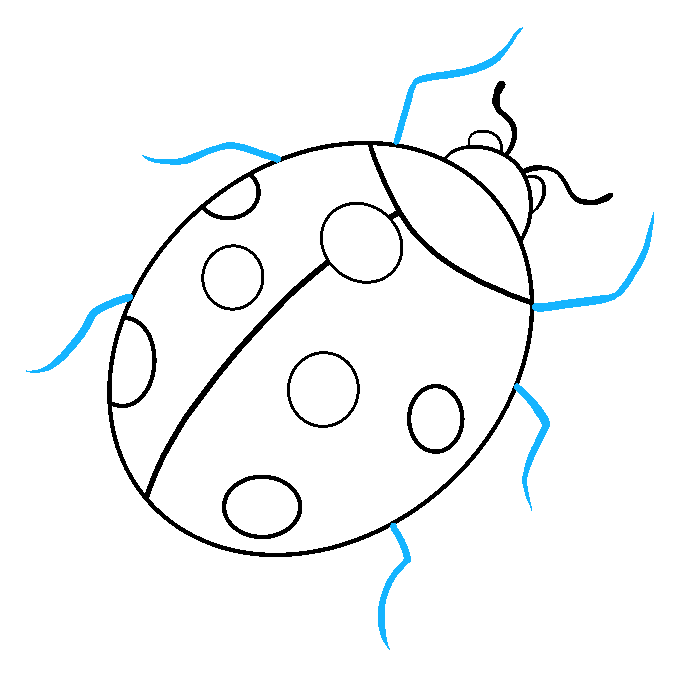 7. Draw the ladybug's legs. As an insect, your bug should have six legs, three on each side of the body. Draw each leg in segments, using short, slightly curved lines connected at various angles. 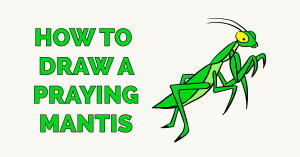 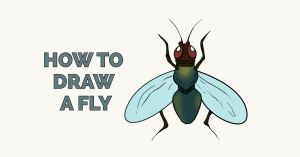 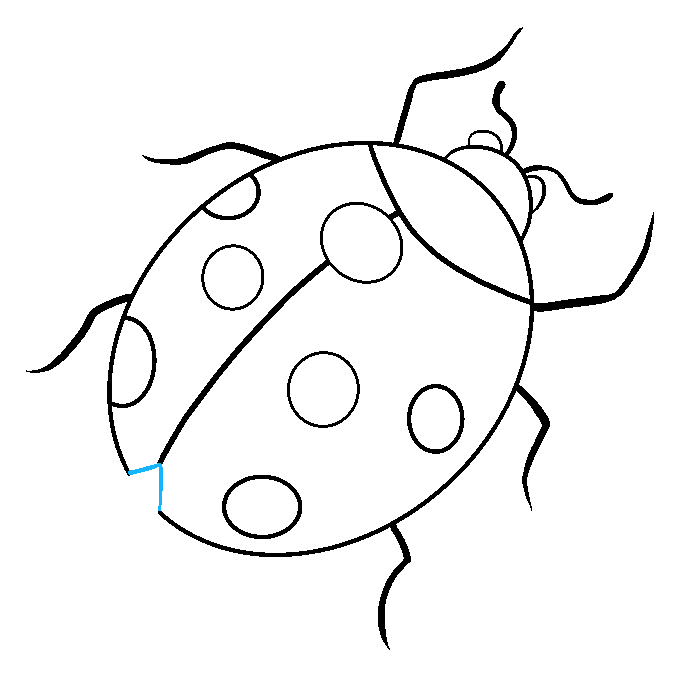 8. Draw two small, straight lines from the central line to the edge of the shell, enclosing a triangle. Erase the base of the triangle. This indention provides lifelike detail to the beetle's shell. 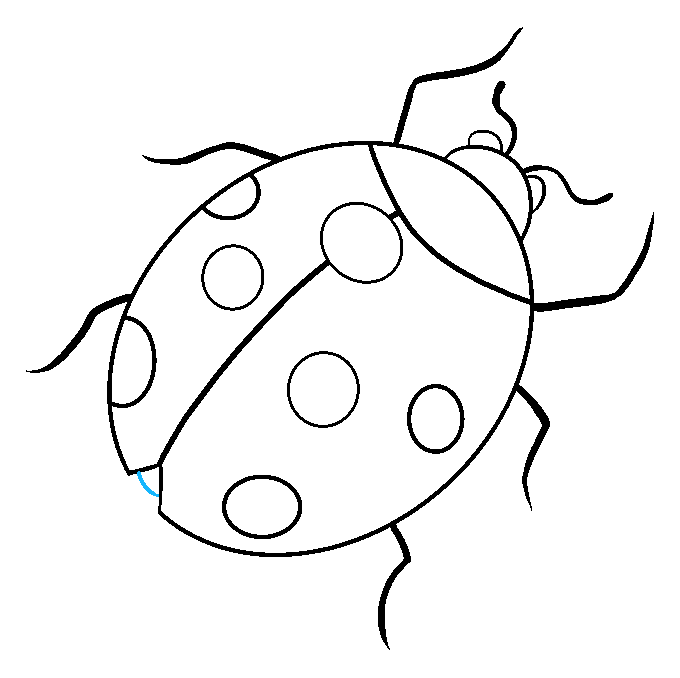 9. Draw a short, curved line across the open triangle formed in the previous step. This indicates the beetle's body visible beneath its shell.

10. Color your ladybug. Many ladybugs are red with black spots, but they may also be orange, yellow, brown or even green. Some tropical ladybugs are black with reddish or orange spots; others don't have spots at all, but stripes or wavy bands! 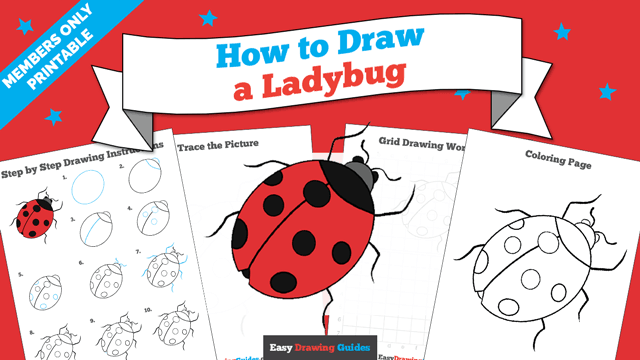