Skip to content
Easy Drawing Guides > easy, landscape, other, space > How to Draw a Night Sky 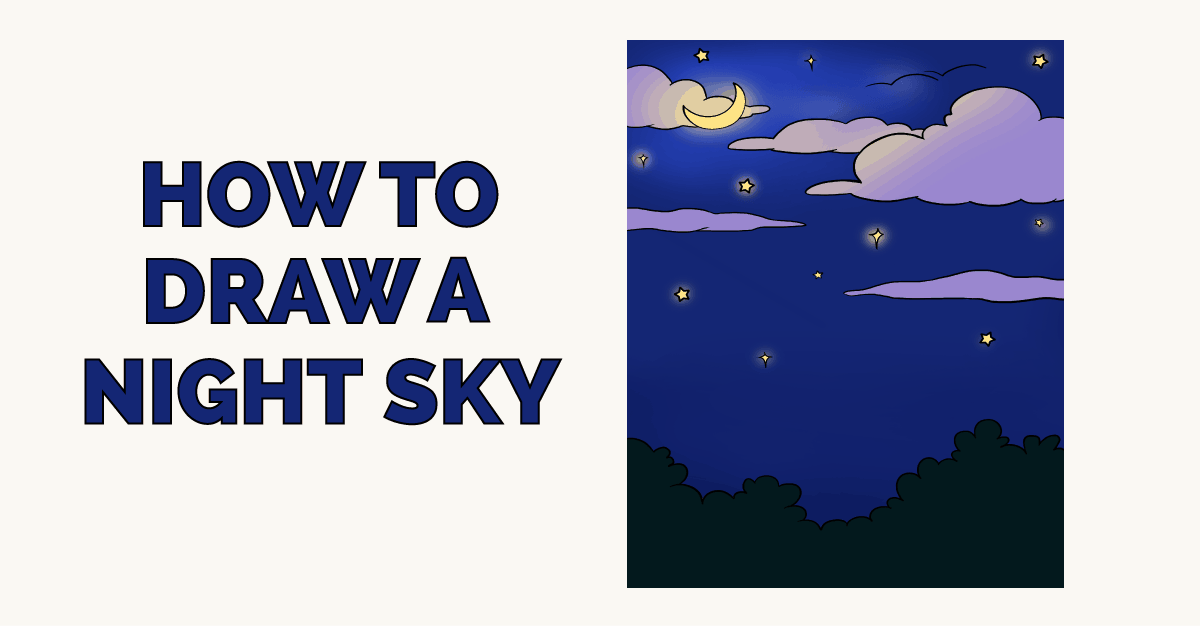 Pumbaa: "Hey, Timon, ever wonder what those sparkly dots are up there?"
Timon: "Pumbaa, I don't wonder; I know. They're fireflies. Fireflies that, uh... got stuck up on that big bluish-black thing."
- Disney's The Lion King (1994)

Timon and Pumbaa may not have understood the science behind their view of the night sky, but night is essential to the rhythm of life on earth. Animals, plants, and people exhibit circadian rhythms - some are diurnal, sleeping at night but active during day. Others are nocturnal, awaking at night.

Night time and the night sky has had an impact on human culture since time immemorial. The darkness of night brings forth an element of predatory danger, yet the beauty of a starlit sky can only be experienced at this time.

Many cultures assigned meanings or even deities to the patterns of stars, called constellations, that could be seen in the night sky.

In Norse mythology, night itself was deified in the goddess Nótt, rider of a black horse. Ghosts, goblins, vampires, and other denizens of folklore are said to roam at night.

In the Bible book of Genesis, the stars in the sky are used to exemplify a promise made to the patriarch Abraham.

In the recent past, night time has still been used as a powerful metaphor. For example, Elie Wiesel's autobiographical account of the Holocaust - a genocide of Jews and others during World War II - is symbolically entitled Night.

Starry skies are also used to represent the concept of space exploration, and are therefore lent to adventure, courage, and facing the unknown.

Would you like to draw a nighttime sky? Doing so is as easy as a gentle night time breeze with the help of this simple, step-by-step drawing tutorial. You will need only a sheet of paper, a pencil, and a good eraser. You may wish to use crayons, colored pencils, markers, or paints to bring your finished drawing to life.

If you liked this tutorial, see also the following drawing guides: Sun, Clouds, and Cartoon Forest.

1. Begin by drawing the tree line. This will be a darkened, shadowy area caused by trees backlit against the night sky. To draw your tree line, use short, connected, curved lines to form a larger, wavy line across your page.

2. Draw a crescent moon in the sky. Do so using two curved, “C” shaped lines, one larger than the other. Allow the lines to meet in sharp points on each end, enclosing the crescent shape.

3. Draw a cloud in the sky. Do so by enclosing an irregular figure using curved lines of different lengths. Notice that the cloud is flatter on the bottom and “fluffier” on top.

4. Draw a cloud behind the moon. Again, use curved lines of various lengths to enclose the shape.

5. Draw yet another cloud. Use connected, curved lines to enclose an irregular shape.

7. Draw stars in the sky. A simple way to draw a star is by using ten straight lines to enclose the shape’s five arms.

8. Draw additional stars. Another way to draw a star is the four-pointed start. Notice how the bottom arm of the star is longer than the others.

10. Color your night sky. Consider combining this starlit sky with one of our other drawing tutorials, such as the forest. Then, add nocturnal animals to inhabit it - bats, owls, spiders, and more.

The Complete Night Sky Drawing Tutorial in One Image

How to draw: Night Sky - all drawing steps