Tennis a sport or game "in which two opposing players (singles) or pairs of players (doubles) use tautly strung rackets to hit a ball."

Tennis is played using a net, as is volleyball. In Britain, it is known as lawn tennis because the original courts were in the grass.

Today, tennis is played by millions of people around the world. Sports lovers avidly follow professional tennis matches, while novices of all ages hit the courts at their local parks.

Get your head in the game and draw your very own cartoon tennis racket and tennis ball. All you'll need is a pencil, pen, marker, or crayon.

Follow the step-by-step instructions as you craft your sports equipment using lines and simple shapes, including teardrops, ovals, rectangles, and trapezoids.

Not into tennis? You've still got game. Shoot some hoops or toss around the old pig skin.

Step-by-Step Instructions for Drawing a Tennis Racket and Ball

1. Begin by drawing a long, curved line and doubling it back upon itself to form a shape like a teardrop. Notice that the lines don't meet at the point. This forms the head and shaft or throat of the tennis racket - the part you use to hit the ball.

2. Begin drawing the racket's handle. At the open end of the teardrop shape, draw a small curved rectangle. Then, extend a long straight line from one side of it. This begins to outline the grip.

3. Extend another straight line, outlining the opposite side of the handle's grip. Connect the two straight lines by drawing a small trapezoid with rounded corners between them. This is called the butt of the tennis racket.

4. Draw a large curved triangle on the racket's throat.

How to Draw a Hockey Player 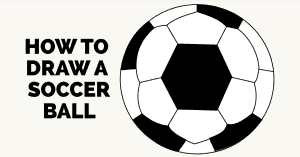 5. Next, draw a large oval within the head of the racket. This distinguishes the strings from the rim.

6. Begin drawing straight lines within the rim, oriented from the top of the racket to the throat and parallel to one another. These are the strings.

7. Continue drawing the strings until the tennis racket's head is full of them. Then, draw the strings that run horizontally. Again, use straight, parallel lines. These lines should cross the previous strings at a perpendicular angle.

8. Continue stringing your racket with straight lines until complete.

9. Next, draw the tennis ball. First, draw a circle. Then, draw an "S" shaped line across it.

Color your cartoon tennis racket and tennis ball. Tennis rackets are made in many colors, but tennis balls are typically bright yellow with a white stripe.

The Complete Tennis Racket and Ball Drawing Tutorial in One Image

How to draw: Tennis Racket and Ball - all drawing steps