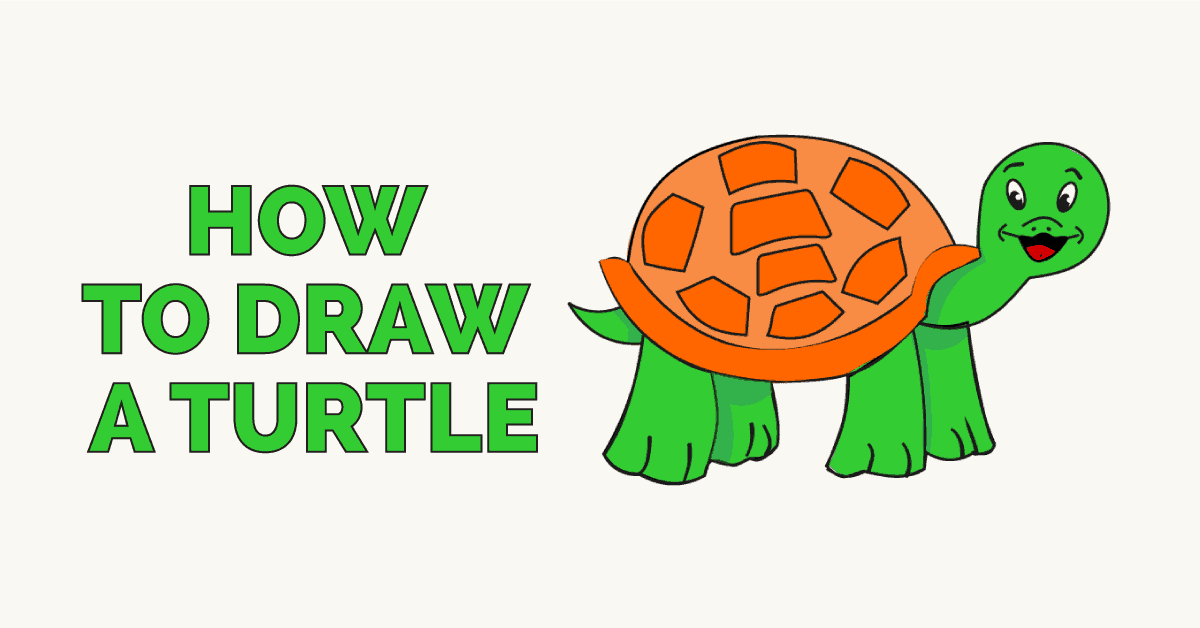 Did you know? While people frequently refer to any reptile with a shell as a "turtle," there are distinctions between turtles, tortoises, and terrapins. True turtles spend most of their time in the water, many coming to land only to lay their eggs. Their bodies are streamlined and they have webbed feet. There are both sea turtles and freshwater turtles.

Tortoises, on the other hand, spend their entire life on land. Their feet are not webbed, but stumpy like elephant feet. They burrow in the ground, and they cannot swim. Terrapins represent the middle ground between the two - they spend part of their time on land and part in the water.

Turtles often make their way into popular culture. The fable of "The Tortoise and the Hare" teaches the lesson that "slow and steady wins the race." Other popular turtle characters include Leonardo, Raphael, Donatello, and Michelangelo of the Teenage Mutant Ninja Turtles, Squirtle, Wartortle, and Blastoise of the Pokémon francise, and Crush the sea turtle from Disney's Finding Nemo.

Would you like to draw a cute cartoon turtle? Doing so is easy when you follow the steps of this cartoon animal drawing tutorial. You will need a pencil and an eraser. Have some crayons, markers, or colored pencils handy to shade your finished drawing.

If you liked this tutorial, see also the following drawing guides: Dory, Whale, and Cartoon Fish.

Step-by-Step Instructions for Drawing a Turtle 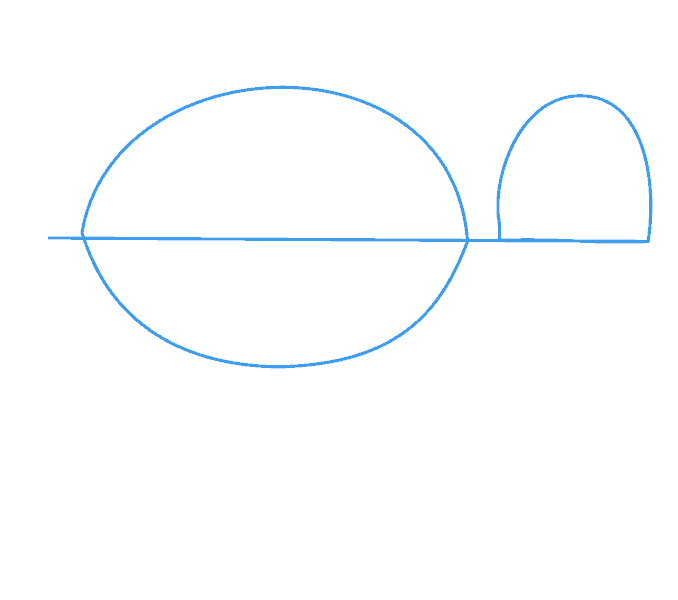 1. Begin by drawing guide lines for the turtle’s head and shell. First, draw a straight horizontal line. Draw an inverted “U” shaped line above it to form the head. For the body, draw an oval with the line passing through its center. 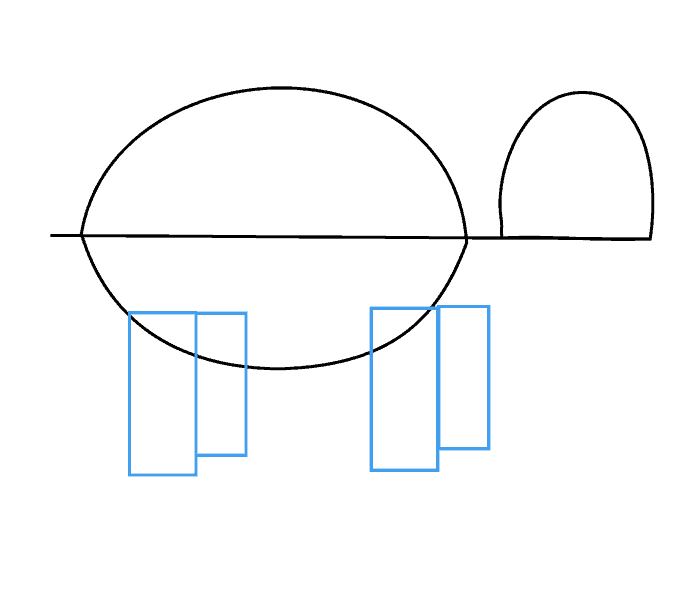 2. Draw rectangles to guide you in sketching the turtle’s legs. Notice that the rectangles forming the far legs are slightly shorter. 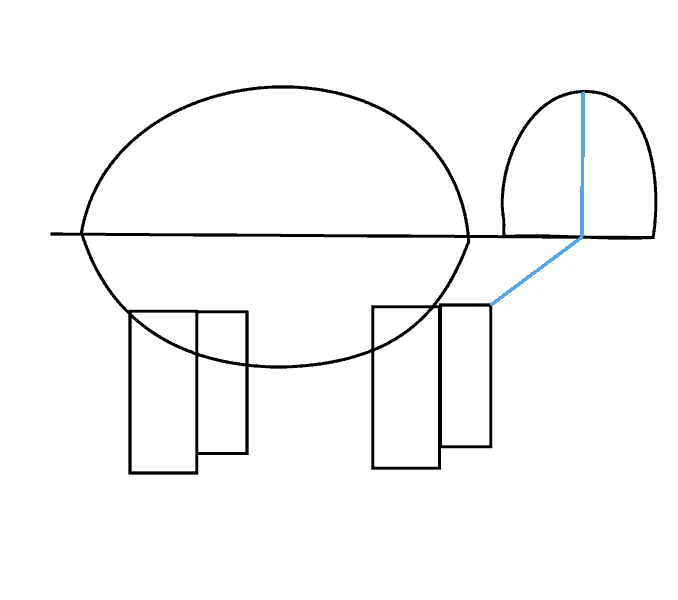 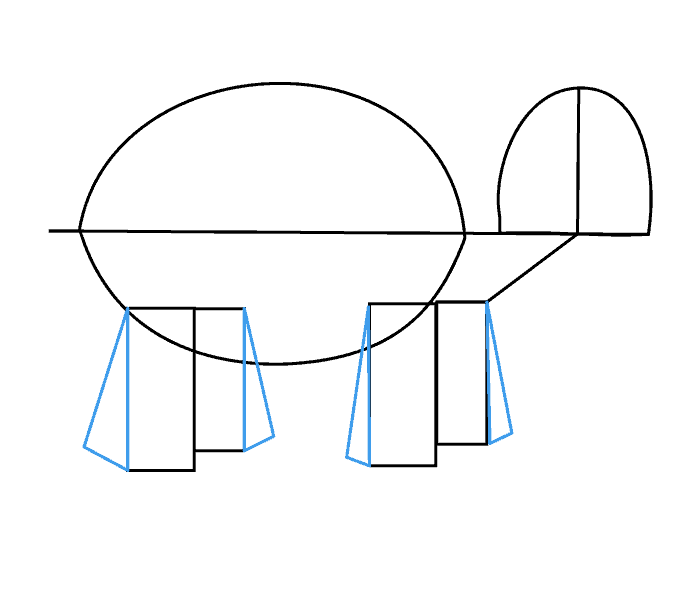 4. Use straight lines to enclose a narrow triangle along each side of the legs. 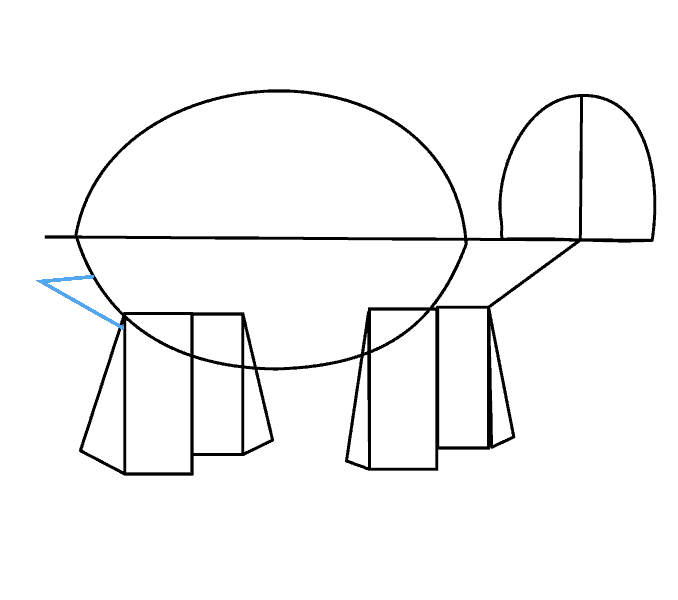 5. Use two straight lines to enclose a triangular shape at the back of the body, enclosing the turtle’s tail. 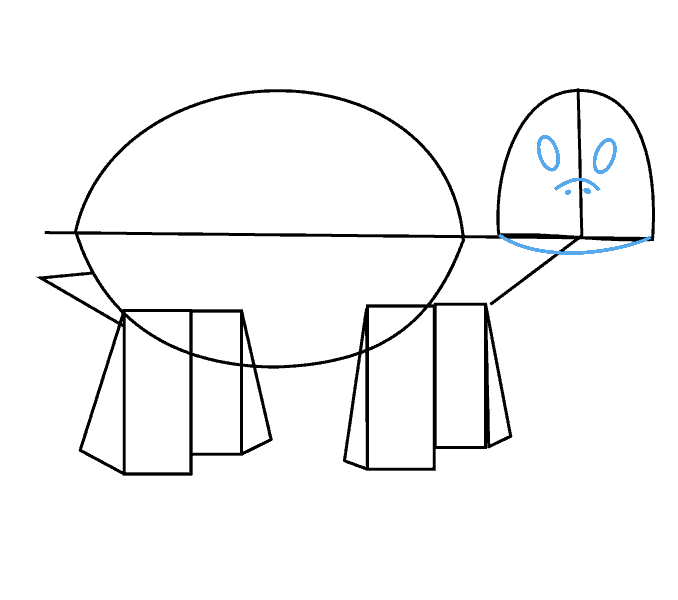 6. Draw a curved line across the bottom of the head, and another, shorter one in the middle of the face. Shade two small circles beneath it to form the nose. Above it, draw two small ovals, forming the eyes. 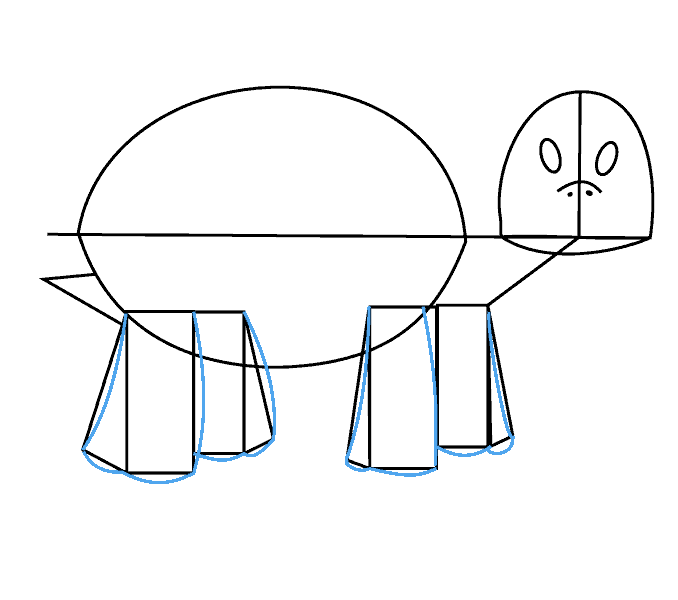 7. Draw curved lines along the sides of the legs and beneath them, contouring the feet. 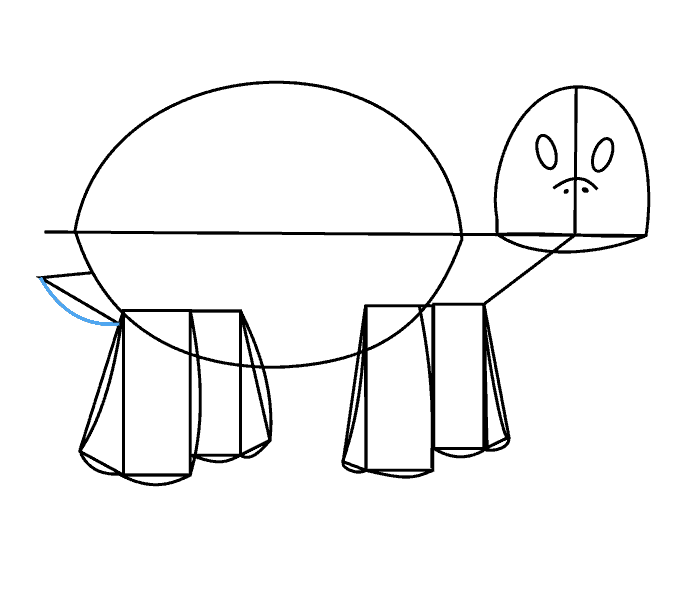 8. Draw a curved line below the tail. 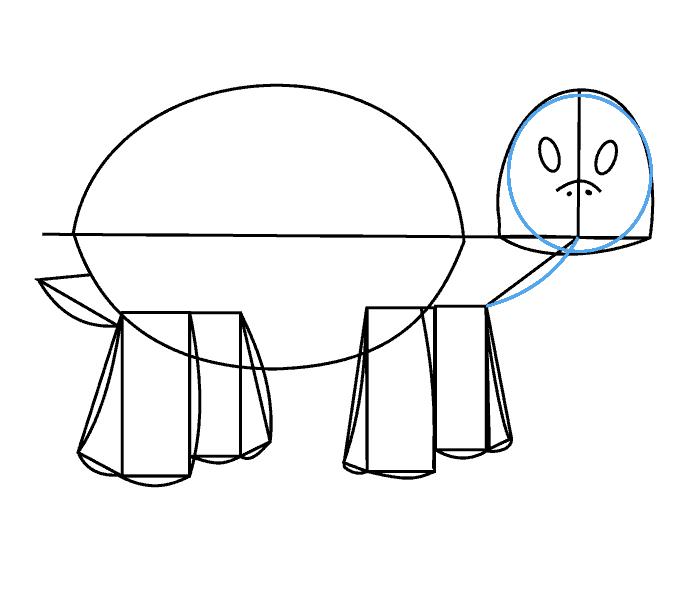 9. Draw a circle within the shape of the face, and a curved line below the neck. 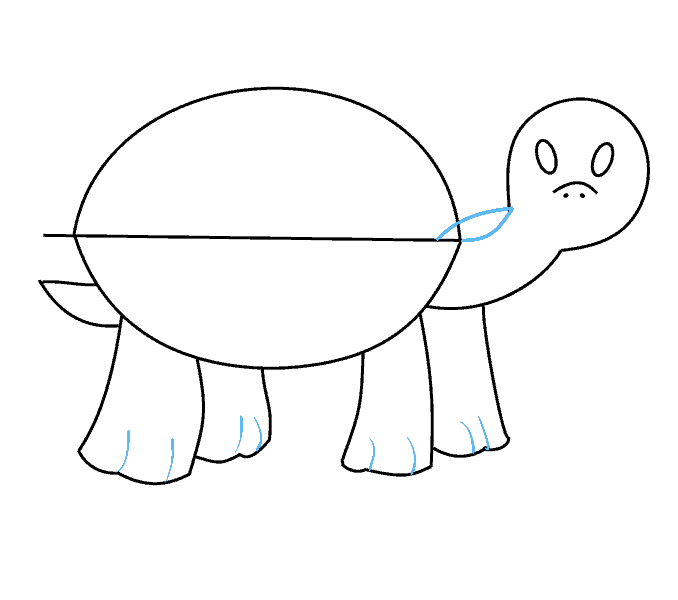 10. Erase the guide lines of the head, neck, legs, and tail. Draw a curved line along the back of the neck, and another crossing into the shell. Draw curved lines along the feet, distinguishing the toes. 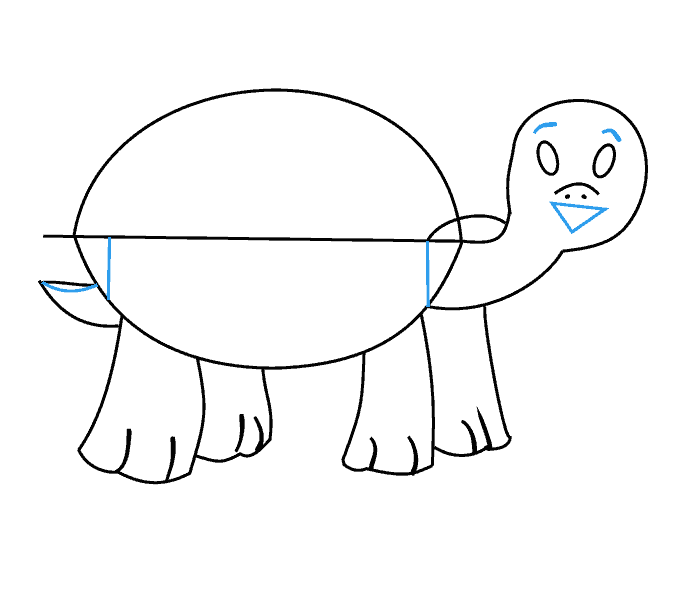 11. Draw straight lines from the midline of the shell to the belly. Draw a curved line to contour the top of the tail. Then, add more detail to the face. Use curved lines for the eyebrows, and a small inverted triangle for the open mouth. 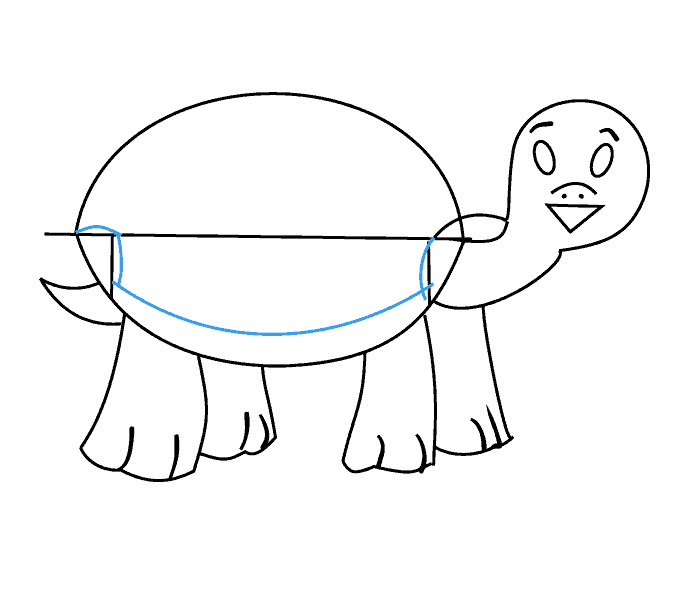 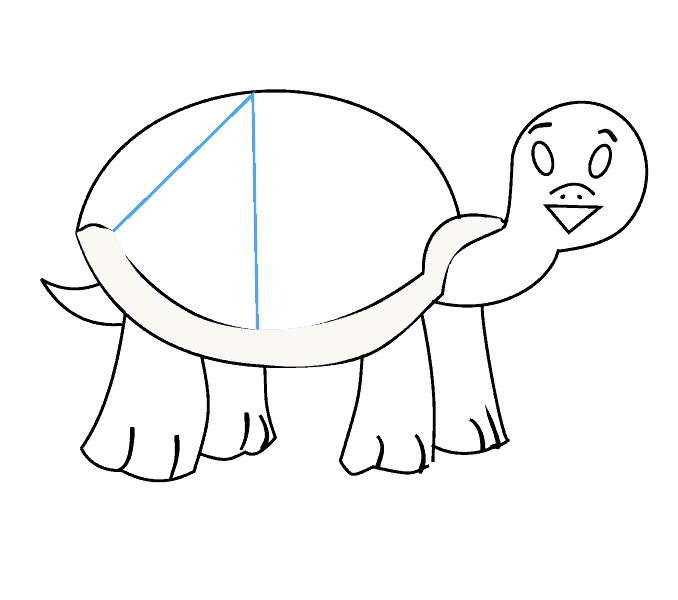 13. Erase the remaining guide lines. Then, use two straight lines to enclose a triangle shape on the shell. 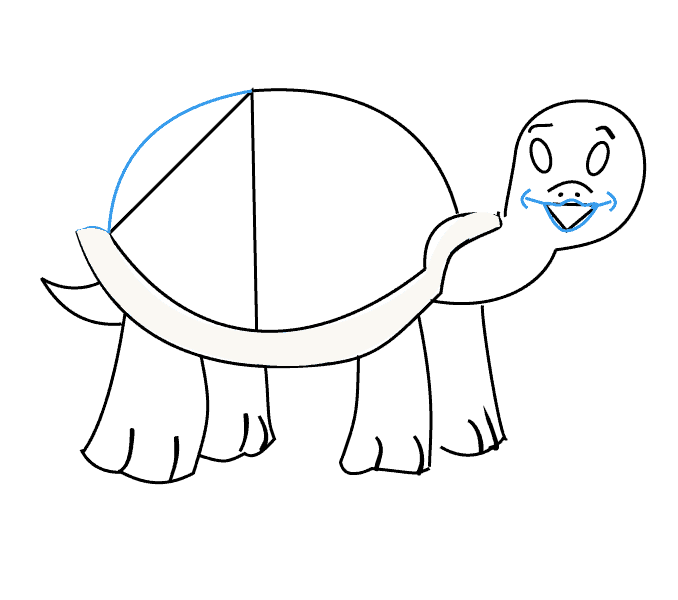 14. Erase the edge of the shell, and replace it with two curved lines. Then, use curved lines to contour the mouth around the triangle. 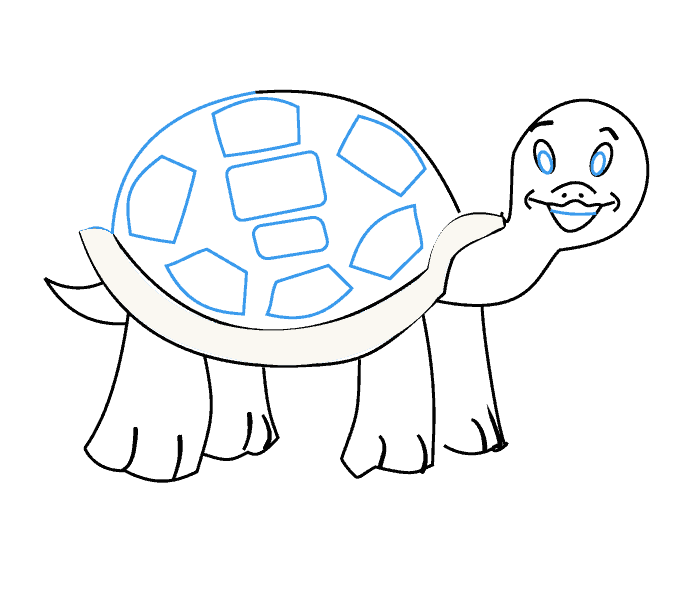 15. Erase the guide lines of the mouth. Draw a curved line across it to indicate the tongue. Then, draw a small oval within each eye. Finally, enclose geometric shapes on the turtle’s shell - rectangles with rounded corners and curved trapezoids. 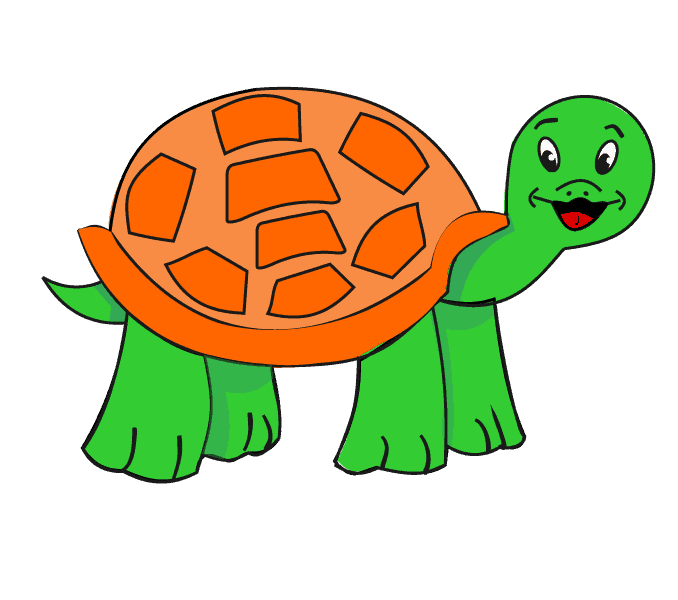 Color your cartoon tortoise. They are often green, brown, or grey. Some have bright markings, like yellow and red.