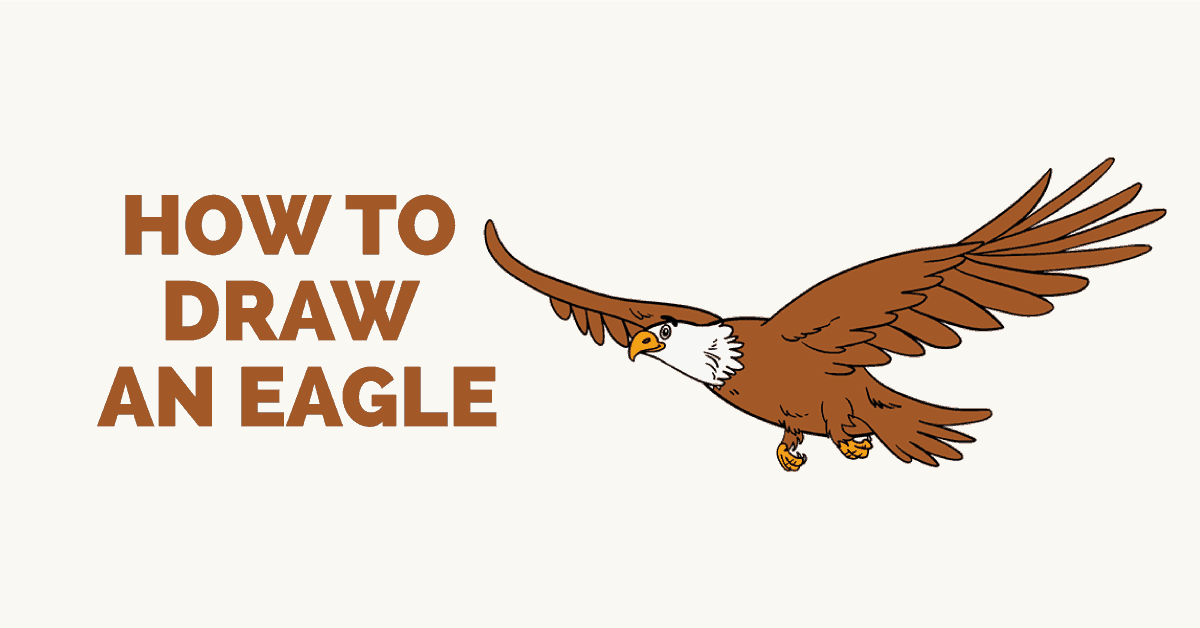 There are about sixty different kinds of eagles in the world, and they live on every continent except snowy Antarctica. Eagles are birds of prey and are known for their amazing eyesight - some eagles can spot a mouse scurrying in the grass from over a mile away. Eagles have even been trained to hunt for sport through the art of falconry.

Some of the largest species of eagles can achieve a wingspan of 3.35 meters, or nearly eleven feet. The large wings allow the eagle to soar high in the sky on thermal air columns, using little energy and rarely flapping its wings. These graceful birds have become the symbols of sports teams, schools, and even entire nations. The most famous eagle may be the bald eagle, the national bird of the United States of America.

Would you like to draw your very own eagle in flight? Now you can, by following this easy, step-by-step drawing tutorial.

You won't require any special tools or abilities, only a piece of paper and a pencil. You may also want to use an eraser to correct any mistakes, and colored pencils, crayons, or markers to shade your completed drawing.

Notice that each step in this drawing how-to guide is accompanied by a detailed illustration. In each picture, the lines highlighted in blue represent those added in the current step. Lines added in previous steps are shown in black. Notice, too, that some lines, called guide lines, will need to be erased as you complete the drawing.

Are you ready to take flight?

If you liked this tutorial, see also the following drawing guides: Hummingbird, Raven, and Peacock.

Step-by-Step Instructions for Drawing an Eagle 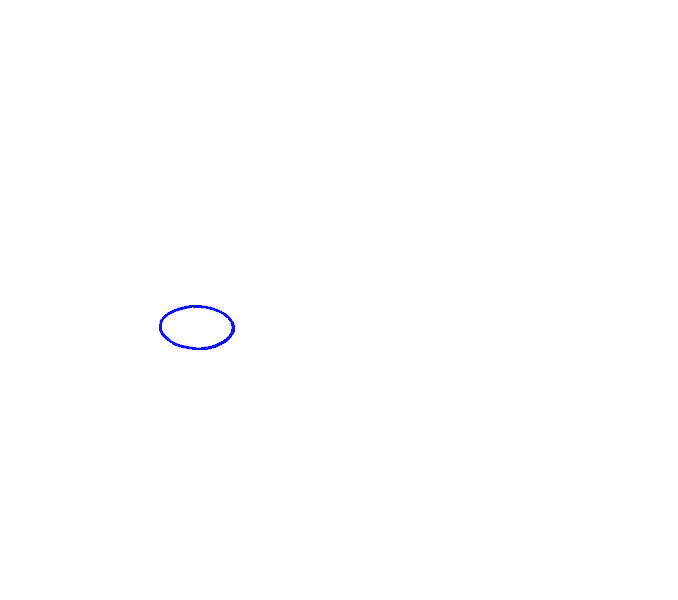 Begin by drawing a small oval. 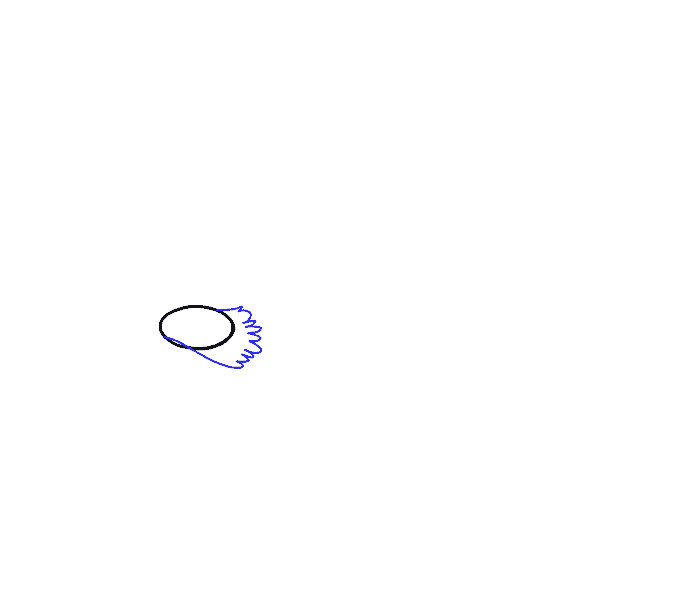 To the right of the oval, extend a series of connected, curved lines, returning to the oval. This enclosed shape will form the feathers of the eagle's neck. 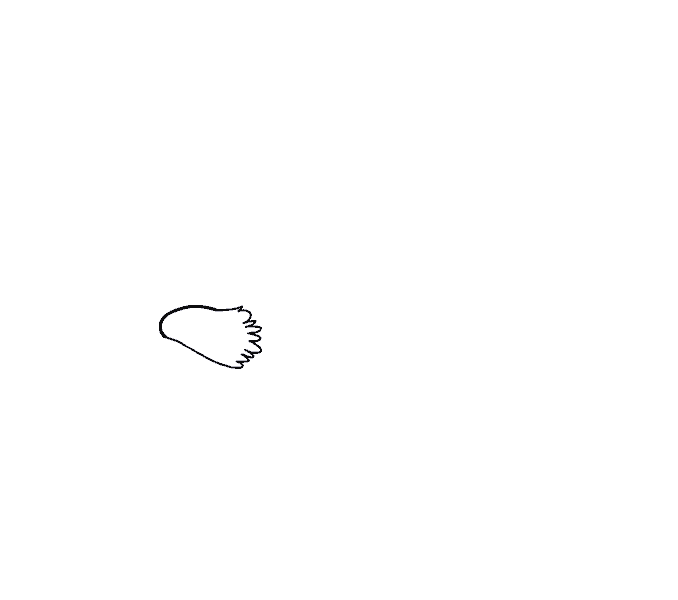 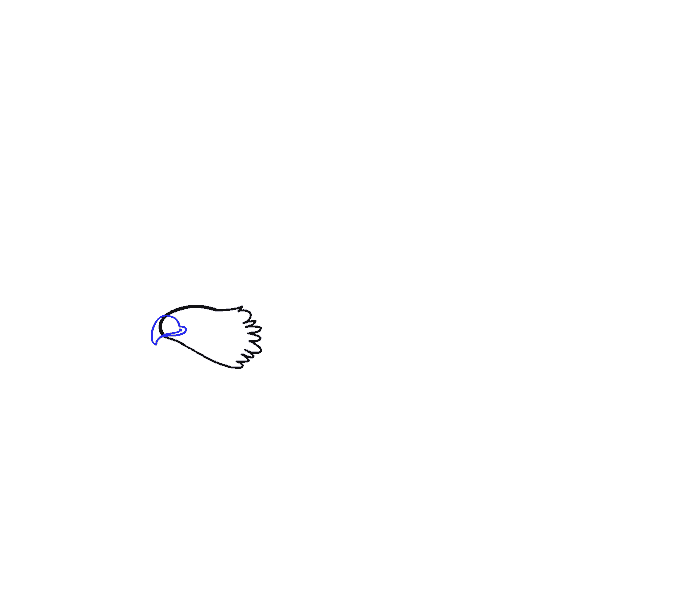 Draw the beak using a series of curved lines. The beak should cross outside the form of the head, lines meeting in a hooked point. 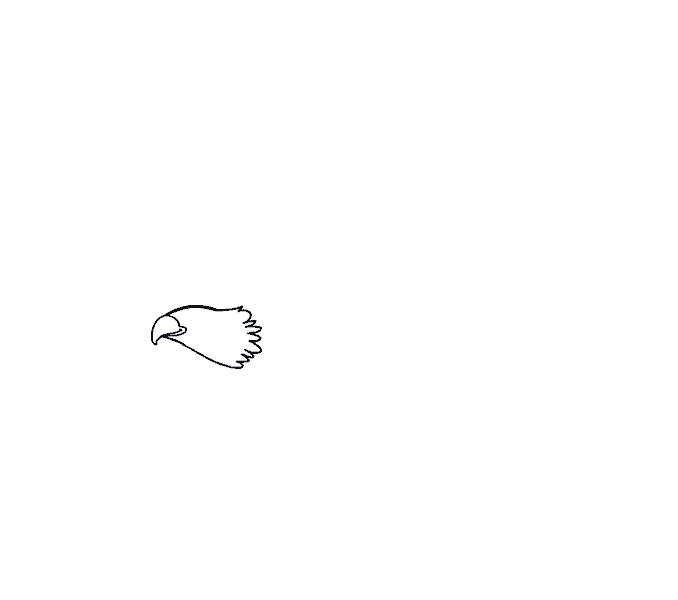 Erase the guide lines from within the beak. 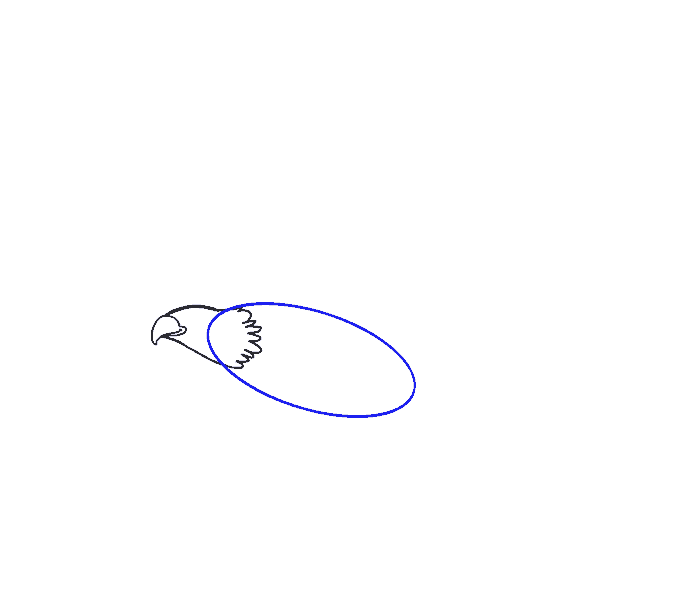 Draw a larger oval overlapping the feathers of the neck. 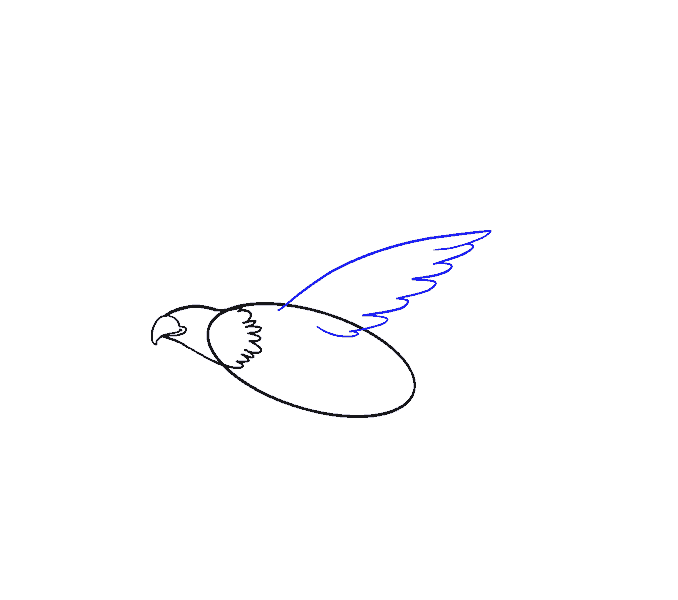 Draw a long, curved line extending from the large oval. Between the end of the line and the oval, draw a series of connected, curved lines to form the feathers of the wing. 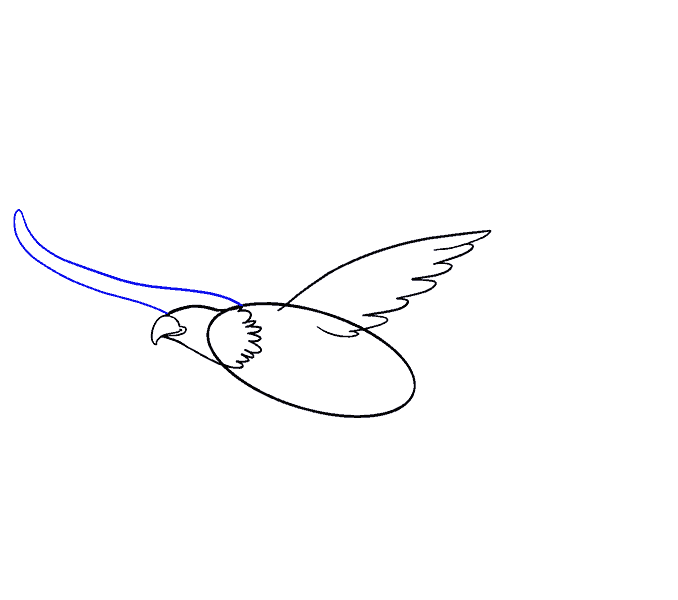 Draw two long, curved lines extending from the head and neck of the eagle. Allow the lines to meet in a rounded point. 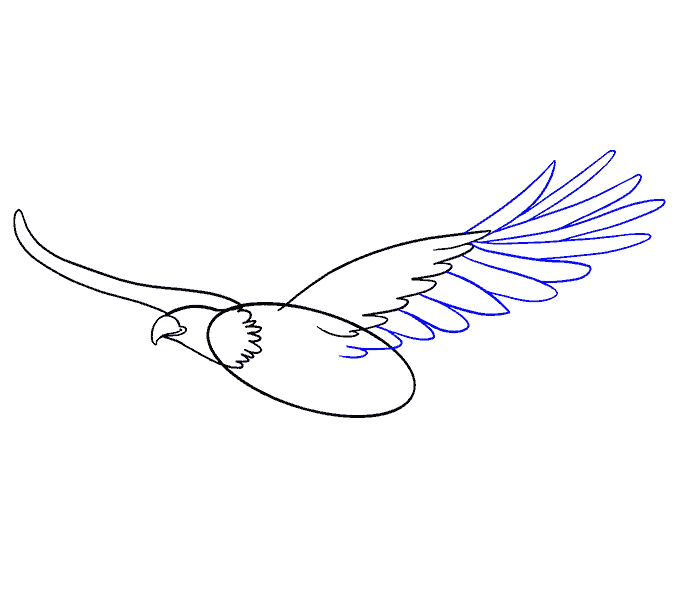 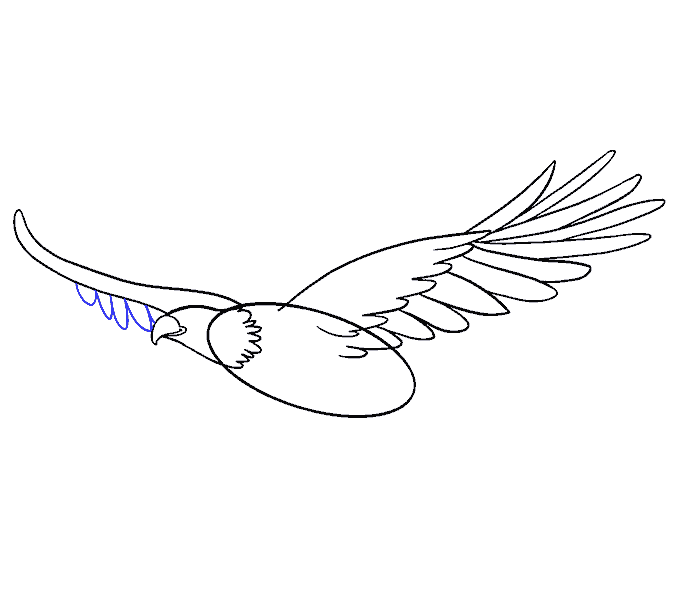 Draw several "U" shaped lines beneath the second wing. 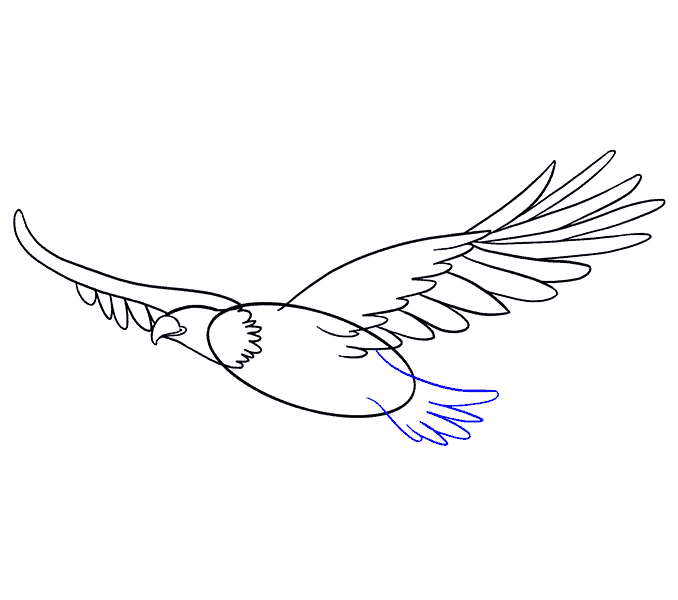 Extend two curved lines from the large oval. Connect the lines using a series of curved, "U" shaped lines. 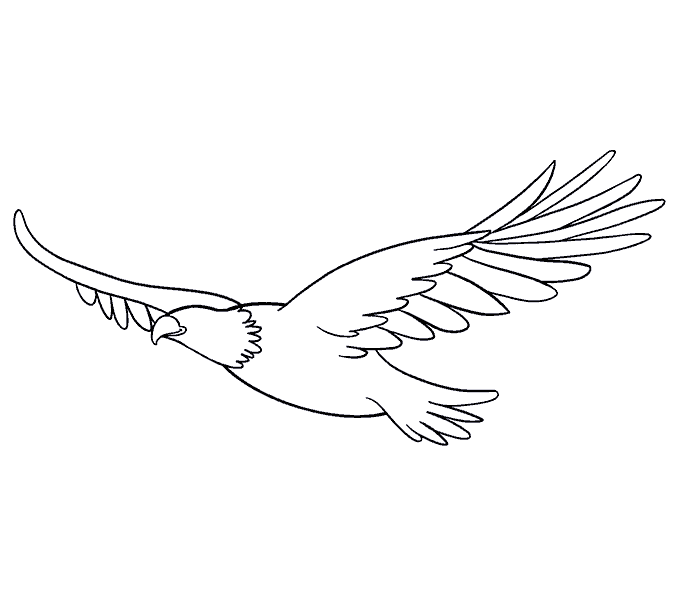 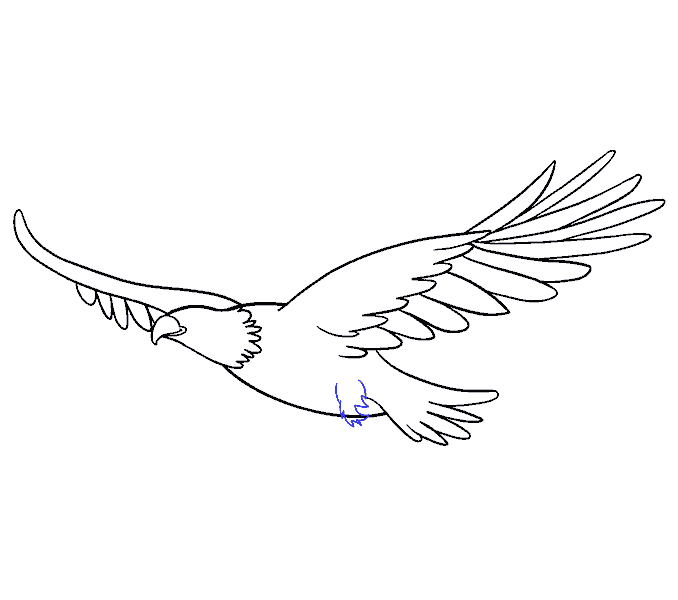 Draw a series of short curved lines at the base of the tail. Allow the lines to meet in jagged points. 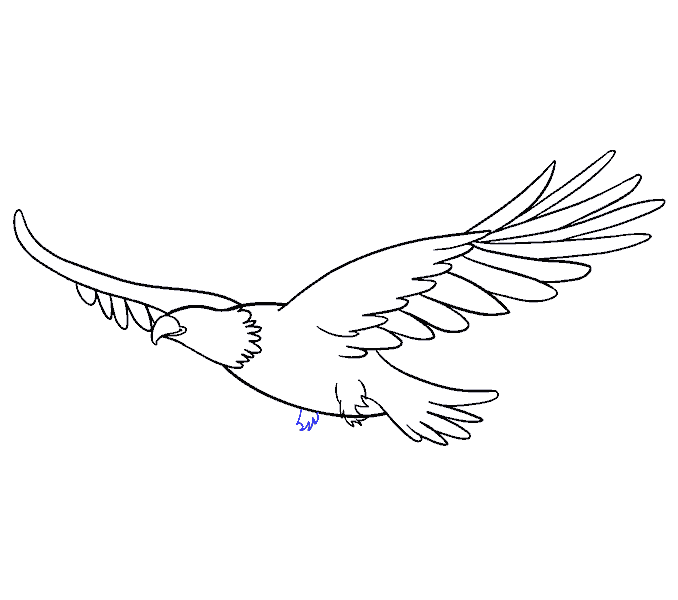 Draw a second series of short, curved lines meeting in jagged points, extending from the belly of the eagle. 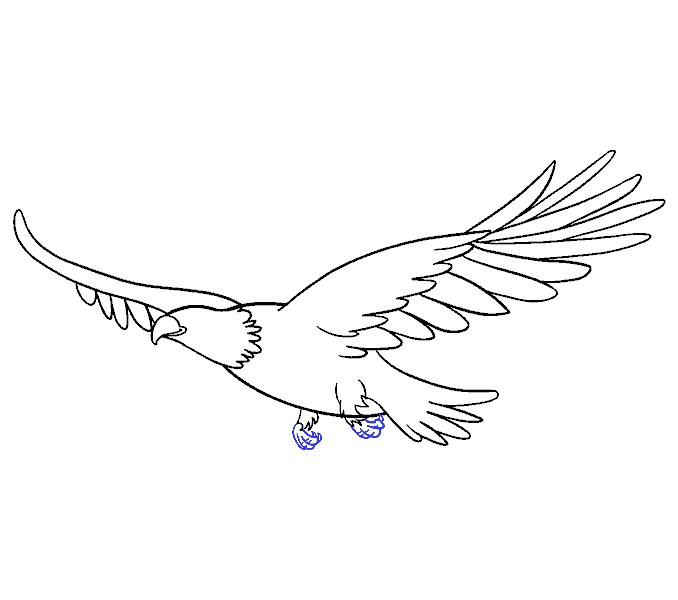 Draw the feet using overlapping curved lines. At the end of the toes, use two short, curved lines to form a curved triangle shape. Add texture to the feet by drawing several short lines across each toe. 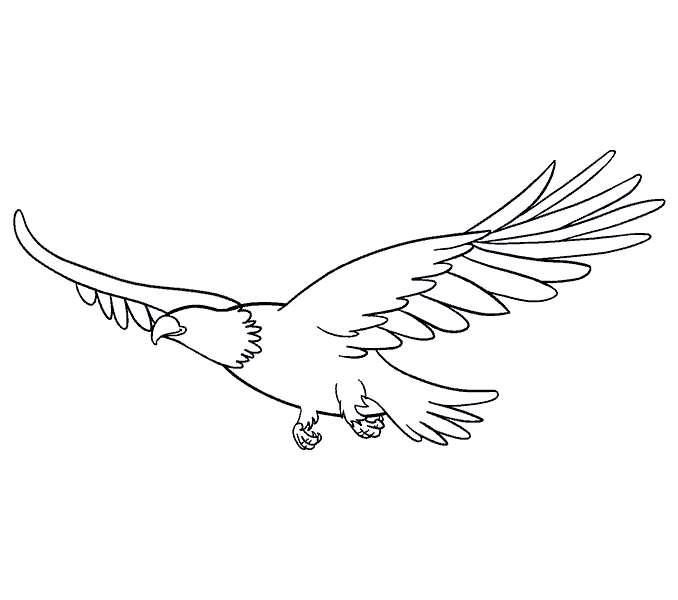 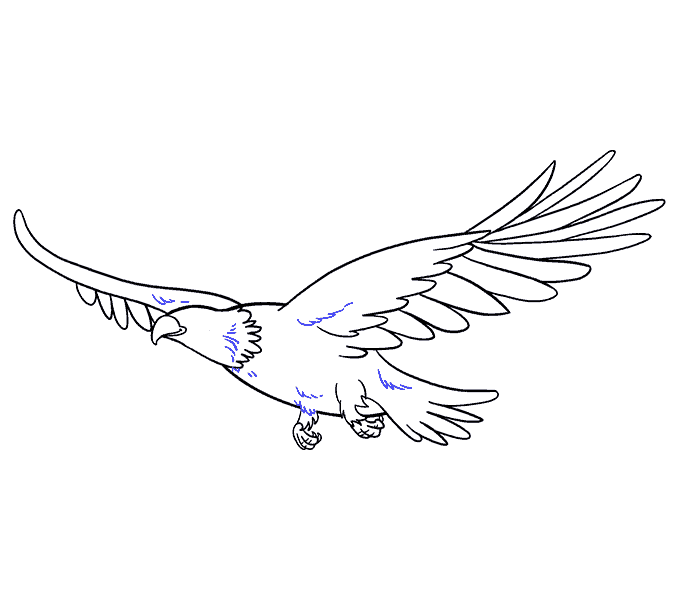 Add the texture of feathers to the wings, neck, and body. Do this by drawing patches of short, curved lines. Some lines may connect. 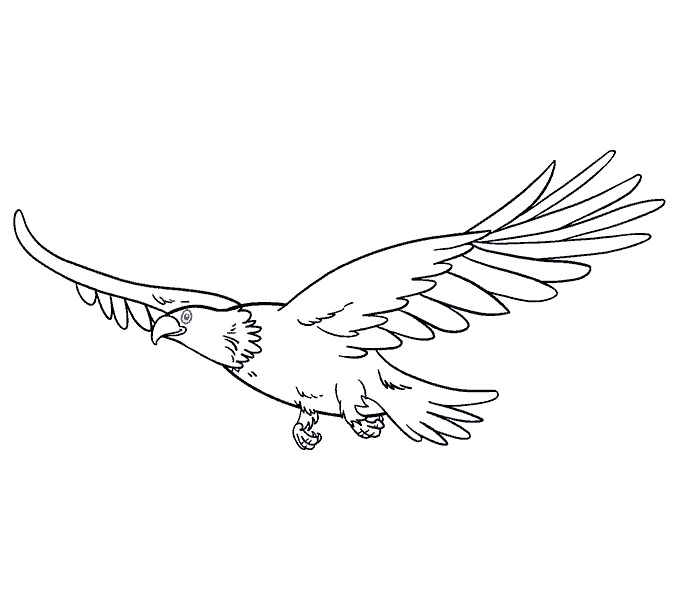 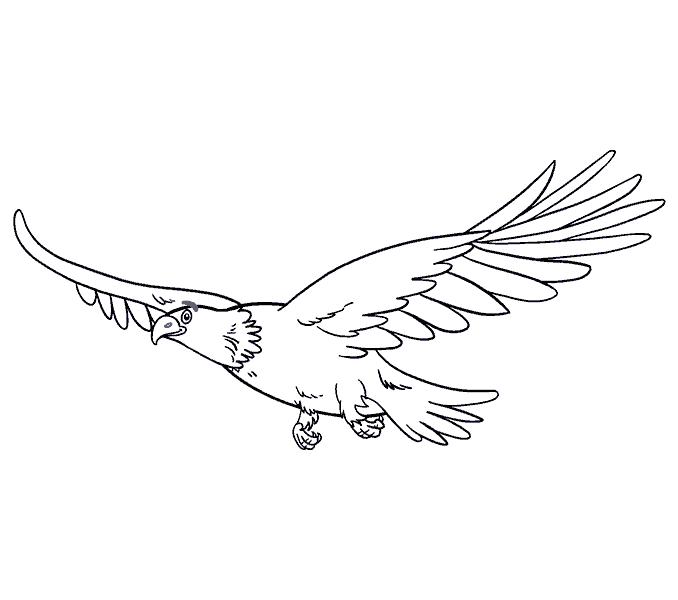 Draw a small, narrow oval within the beak. Draw a short, curved line above the eye. 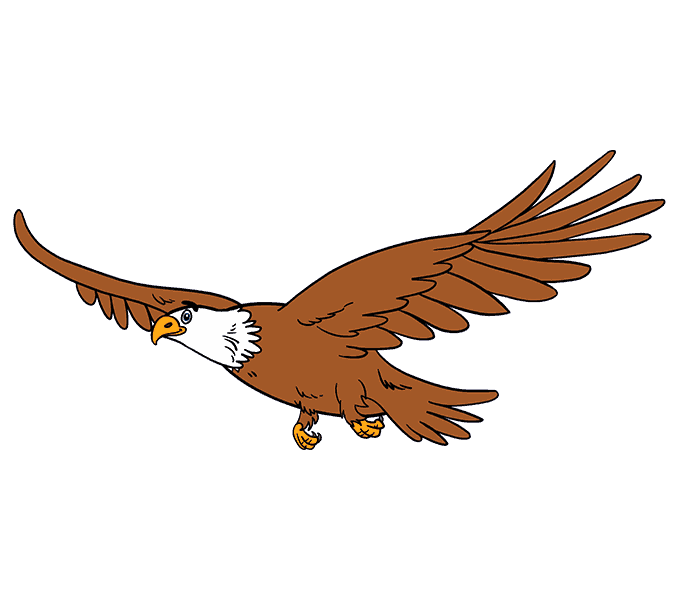 Color your eagle. The bald eagle is typically brown with a white head, but other types of eagles display a range of colors and patterns - grey, brown, black, tan, and white coloration is common, and some have speckles on the wings and stomach.