There are about 30 species of iguana that live in tropical regions of the Americas and surrounding islands. Iguanas live on land, burrow underground, climb trees, and even swim in the ocean. The largest can get well over six feet in length and weigh nearly 15 pounds. They can live for 20 years in the wild.

Iguanas eat mostly plants such as leaves, flowers, and fruit. They may also eat insects, birds, or small mammals. Did you know? Iguanas have venom glands, but their venom is harmless to humans. They can also use their tails like whips to fend off predators.

Iguanas were first described by scientists in 1768. The name "iguana" was derived from the name for the lizard in Taino, a language of the Caribbean. In their native lands, iguanas are often an important source of food. Elsewhere, they are kept as pets.

Would you like to draw a cartoon iguana? Now you can, with the help of this easy, step-by-step animal drawing tutorial. The iguana in this illustration is a green iguana, native to Mexico and Central America. All you will need is a pencil, an eraser, and a sheet of paper.

If you liked this tutorial, see also the following drawing guides: Skunk, Beaver, and Sloth.

Step-by-Step Instructions for Drawing an Iguana

1. Begin by drawing an oval. This will help you to draw the iguana's head.

2. Draw three curved lines overlapping the circle. This forms the upper and lower portions of the Iguana's mouth, as well as his lower jaw.

3. Erase the guide lines of the original oval. Draw a short line on top of the jaw.

4. Draw two overlapping curved lines on top of the iguana's head, forming the brow. Then, draw a number of successively smaller circles nested inside one another to form the eye. Shade between the two smallest to indicate the pupil. Then, draw a small oval with a dot beside it on the snout to indicate the nostril.

5. Use long, curved lines to outline the iguana's body. Extend one line from the brow and another from below the jaw.

6. Use a curved line to enclose the wavy shape of the skin below the iguana's throat.

7. Extend the outline of the body using curved lines. Allow the lines to double back beneath the body and meet at a point, forming the tail. Then, use pairs of curved lines of various lengths to draw spikes upon the iguana's back. The lines should meet at points. Note that the spikes are longest at the back of the iguana's head. 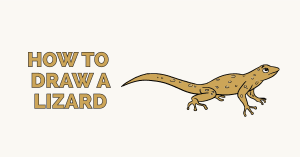 8. Draw the iguana's legs, erasing as necessary. Use pairs of lines to draw the front and rear legs. Note the overlap at the shoulder and the bend of the rear knee. Then, enclose the feet using curved lines and narrow "U" shaped lines for the toes. Note also the front foot visible behind the neck. Connect the jaw, front leg, and rear leg using curved lines, indicating the underbelly.

9. Detail your iguana with a striped and spotted pattern. Enclose numerous triangle shapes along the back and tail. Draw circles and ovals of different sizes on the head and back to give the lizard a scaly appearance.

Color your iguana. Many iguanas are green, but they may also be grey, brown, white, red, or black.

Then, learn to draw more fascinating animal cartoons from our selection of animal drawing guides!

The Complete Iguana Drawing Tutorial in One Image

How to draw: Iguana - all drawing steps