Skunks are mammals native to North and South America. They are highly recognizable due to their bold black and white coloration. They are most well-known, however, for their ability to spray a pungent liquid from glands located beneath their tails, which they use to ward off predators.

The skunk got its name from a Native American word meaning "to urinate." This is a misnomer because the spray is not urine but a combination of sulfur-containing chemicals. Despite their bad reputation, skunks are kept as pets in seventeen U.S. states and in the United Kingdom. Many pet skunks never learn to spray, and even those that do pose no threat unless frightened.

A number of fictional skunks have been made famous by cartoon animation. These include the Looney Tunes' Pepe Le Pew, Bambi's Flower, and Stella from Over the Hedge. These characters are often marked by their offensive smell.

Did you know? Not all skunks have stripes. Some species are spotted instead. Captive skunks may exhibit interesting color patterns, including brown stripes, a smokey grey color, or even solid white.

Would you like to draw an adorable skunk? This easy, step-by-step animal drawing tutorial is here to show you how. All you will need is a pencil, an eraser, and a sheet of paper.

Step-by-Step Instructions for Drawing a Skunk

1. Begin by drawing a circle. This will serve as the base of the skunk's head.

2. Use curved lines to detail the outline of the face. This includes the ear and inner details, the cheek, the nose, the open mouth, and the opposite cheek and ear.

3. Erase the guide lines of the original circle, leaving a clean outline of the skunk's face.

4. Extend a long, curved line from the ear to the nose. Then, extend a series of curved lines that meet in jagged points from the ear. Allow this series of lines to meet the earlier line at a point, forming the stripe that runs across the skunk's face. From the back of the stripe, extend another pair of connected lines that meet at jagged points. Allow these to meet at a point near the front of the stripe. 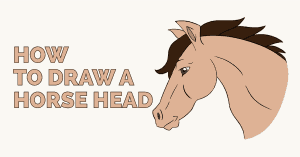 5. Use curved lines to sketch the skunk's forearms, bent at the elbow. Enclose the fingers and hands using narrow "U" shaped lines.

6. Extend three curved lines downward from the hands, forming the light underbelly and the far hip.

8. Draw the tail, using a series of curved lines that meet at jagged points. Extend another pair of jagged lines down the center of the tail, forming the stripe.

9. Detail the skunk's face. Draw the eyes, using four successively smaller circles and ovals for each. Shade between the two smallest to indicate the pupil. Contour the eyes with curved lines above and below each. Use a wide line to form the eyebrow, and distinguish the tongue inside the mouth using a short line.

Color your skunk. In nature, skunks are black in color with a white stripe.

The Complete Skunk Drawing Tutorial in One Image