Boxing, sometimes called pugilism or prizefighting, is a sport in which players wear padded gloves and attack and defend themselves using their fists. Each match, called a bout, has three to twelve rounds of three minutes each. A player wins by scoring a predetermined number of points or by rendering his opponent unable to continue.

Boxing became an Olympic sport in the year 688 B.C.E., but its origins are much earlier. Carvings up to 5,000 years old from Sumeria and Egypt feature boxers. Gloves were in use by at least 1500 B.C.E. - for practice rounds, at least, even if not used in actual competitions.

During the 1700s and 1800s, boxing has transformed from an illegal pastime to a respectable sport with required equipment and rules. Among these were "mufflers," as boxing gloves were then called, designed to protect the players from injury.

During the age of film, boxing took popular culture by storm. Matches featuring legendary greats like Muhamad Ali were televised, and fictional characters like Rocky Balboa were immortalized on film. Cartoon characters often donned gloves and took to the ring, sometimes symbolizing facing a great challenge.

Would you like to draw a pair of cartoon boxing gloves? This easy, step-by-step cartoon object drawing guide is here to show you how. All you will need is a pencil, an eraser, and a sheet of paper.

1. Begin by drawing an oval. This will help you to sketch the first glove.

2. Use a curved line to enclose a rounded rectangular shape on top of the oval. This forms the wrist of the glove.

3. Erase the oval from the wrist. Then, enclose a rectangle across the wrist.

4. Erase one side of the oval. Use overlapping curved lines to form the glove's thumb and mitten. Use short curved lines to draw a starburst pattern at the point where the two lines meet.

How to Draw a Basketball 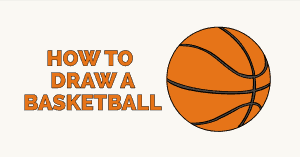 7. Erase the side of the oval. Outline the thumb and mitten of the glove using two overlapping curved lines. Use shorter curved lines to draw a starburst pattern at the point where the two lines meet. Then, draw a curved line from the wrist to this junction, indicating a seam.

8. Draw a circle above the gloves. This will form the hook from which the gloves hang. Draw a "U" shaped line above it. Below it, extend two curved lines and double them back upon themselves. Then, draw pairs of lines from the hook to each glove. This represents the string used to hang the gloves.

9. Detail the glove. Draw curved lines across the wrist and side of the glove to indicate wrinkles and seams.

Color your boxing gloves. They are typically red.

Who is entering the ring? Check out our cartoon characters drawing guides and meet your match.

The Complete Boxing Gloves Drawing Tutorial in One Image

How to draw: Boxing Gloves - all drawing steps