By following the simple steps, you too can easily draw a beautiful Corn Cob. 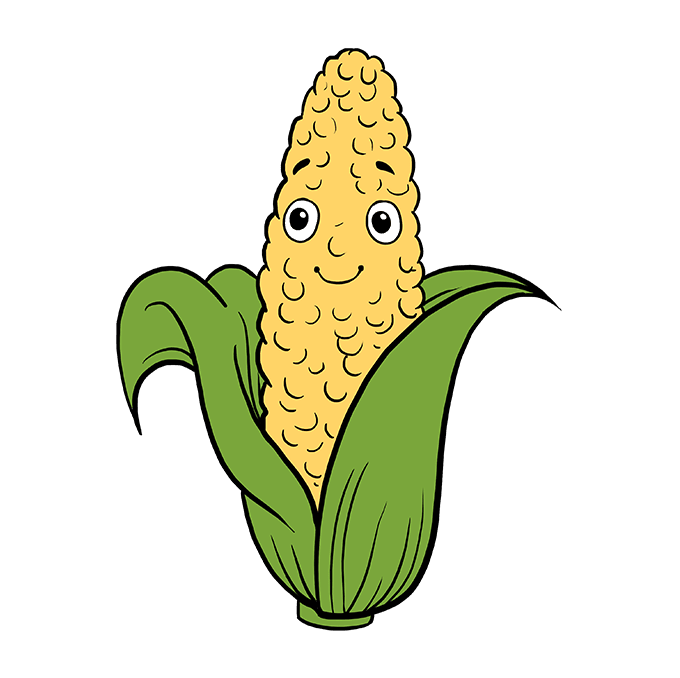 ​Corn, also called maize, is a food producing plant native to the Americas, likely first grown in Mexico. There, it was bred from sturdy grasses.

Christopher Columbus took seeds, or kernels, of the plant back to Europe, and in less than 100 years, it was growing across Europe and Africa. Today, it is the second most widely produced grain to feed people and animals.

​​​In Peru and surrounding South and Central American countries, corn was once worshiped "as the stuff made by gods, the stuff of which man himself was made."

Their corn goddess was depicted as having a crown of corn ears encircling her head like the spokes of a wheel.

​Corn comes in many varieties. Some ears are less than two inches long, while one South American variety is roughly the size and shape of a football, with kernels one inch in diameter. Corn comes in many colors as well. Blue corn is well known in the form of corn chips.

​​Would you like to draw an ear of corn? Doing so is easy with the help of this simple, step-by-step corn drawing tutorial.

All you will need is a pencil and a sheet of paper. You may also wish to use crayons, colored pencils, markers, or other implements to shade your finished drawing.

If you liked this tutorial, see also the following drawing guides: Pumpkin, Cupcake, and Beans.

​Step by Step Instructions for Drawing a ​Corn Cob 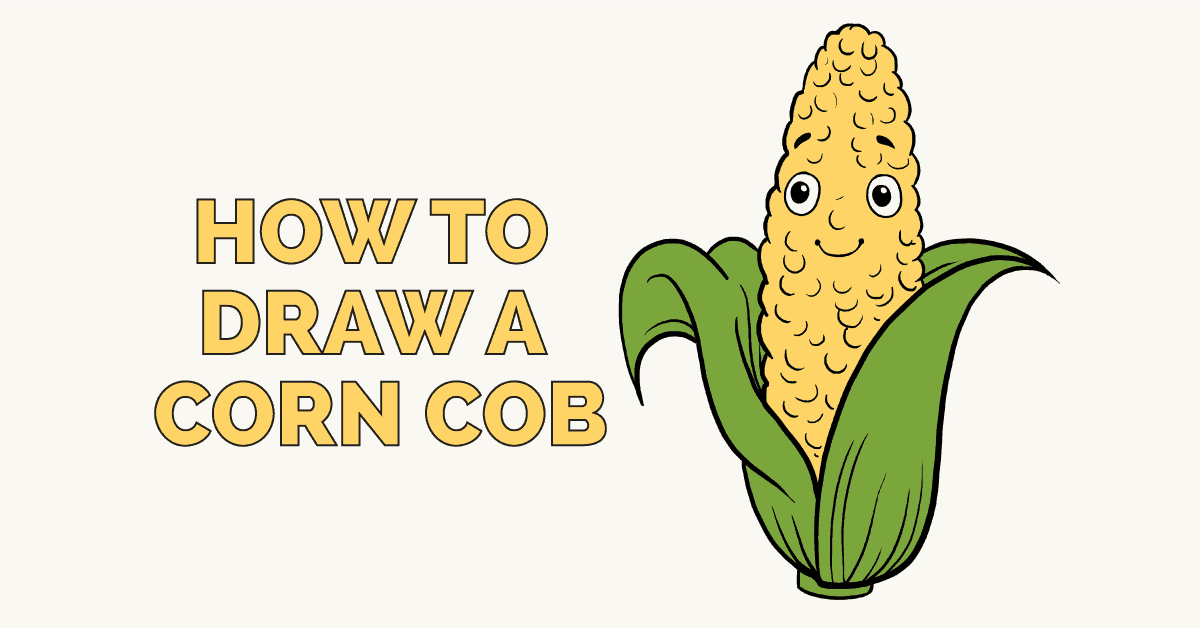 How to Draw a Great Looking Corn Cob for Kids, Beginners, and Adults - Step 1 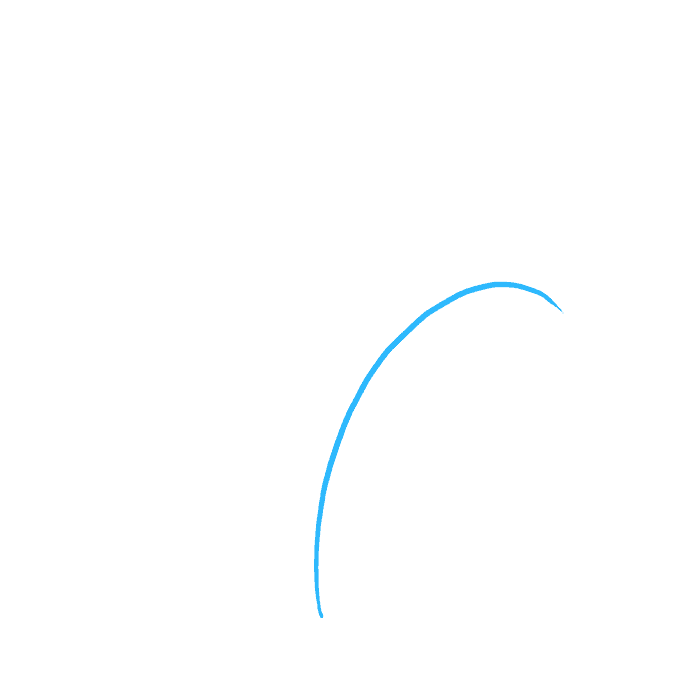 1. ​Begin by drawing a long, curved line, like an incomplete letter "C." This will form the corn's husk, or leafy part. 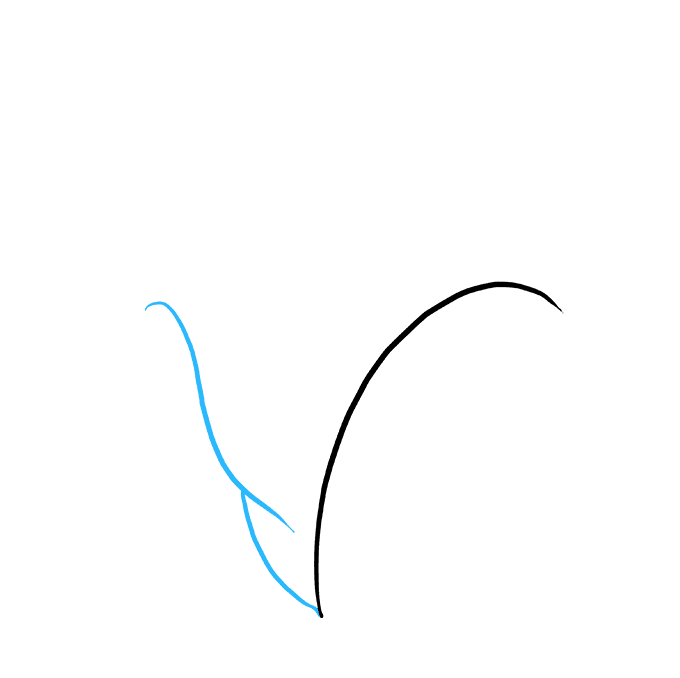 2. ​Outline the outer edge of the opposite husk using two overlapping curved lines. 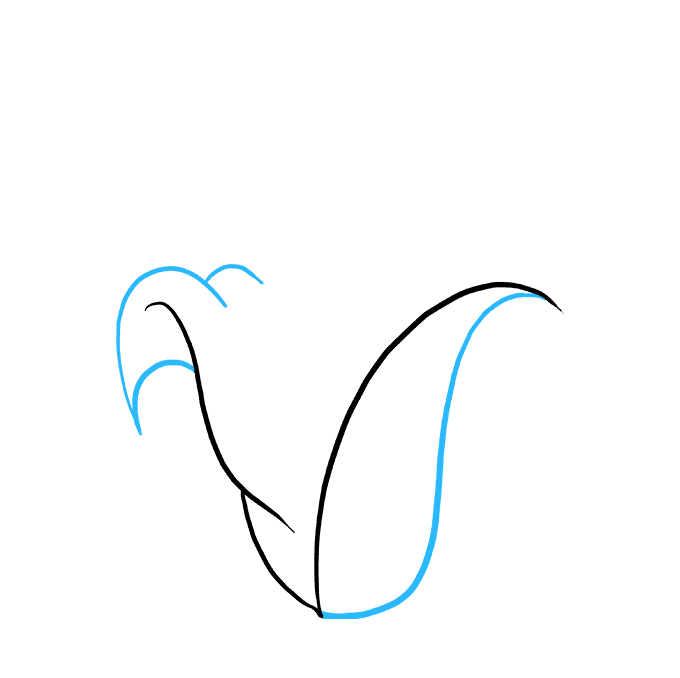 3. ​​​​​​Continue to outline the leafy husk. Use a long, curved line to enclose a teardrop-like shape alongside the original line. Draw a bend in the opposite husk using a series of connected, curved lines. Notice the downward facing point of the leaf. 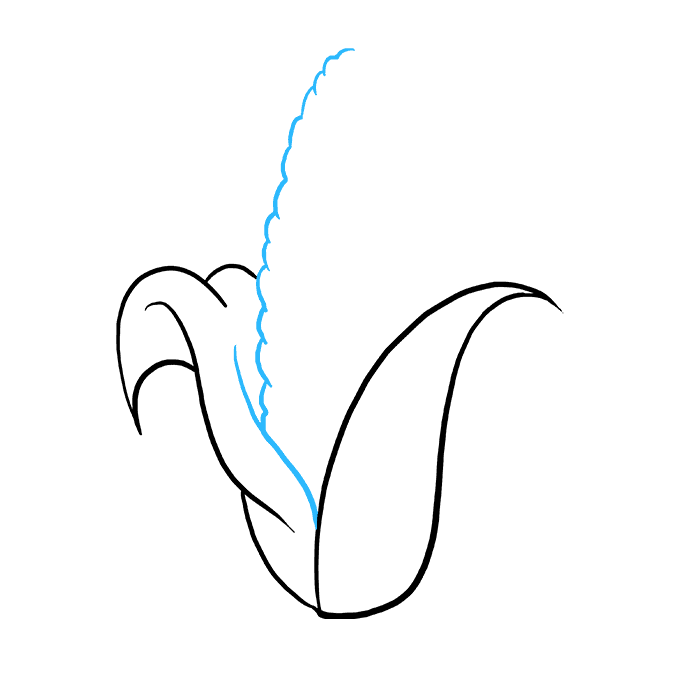 4. ​​​​​​Begin to outline the corn on its cob. First, draw a curved line extending from the first portion of the husk, forming a "V" shape where the husk splits. Then, use a series of short, curved, connected lines to form the bumpy kernels of corn. 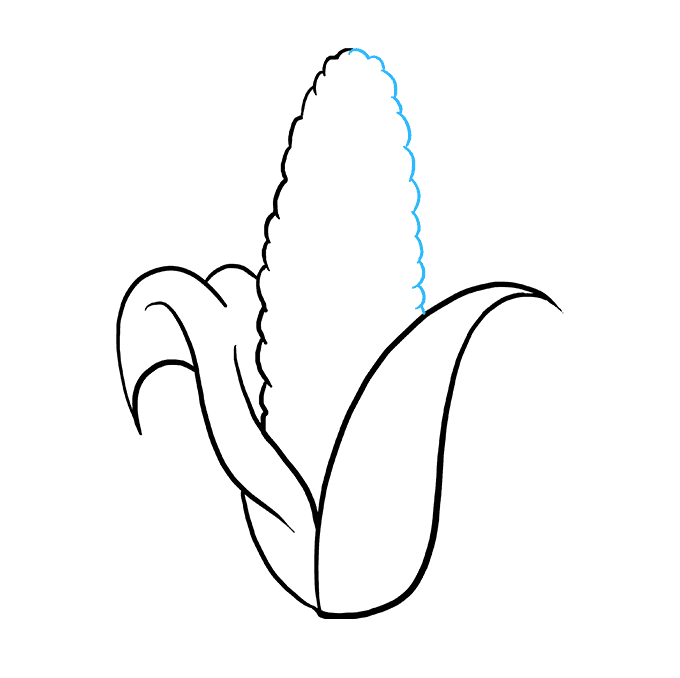 5.​ ​​Continue to draw short, curved, connected lines on the opposite side of the corn cob. Continue until the elongated shape of the cob is enclosed. 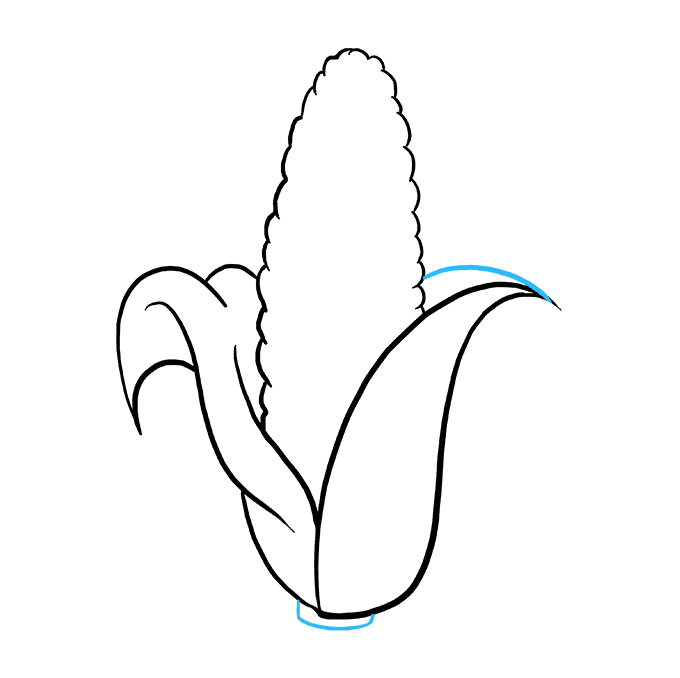 6. ​Complete the husk by drawing a curved line from the corn cob to the leaf tip. Draw the cut stalk at the bottom of the corn cob by enclosing a narrow shape using a short, curved line. 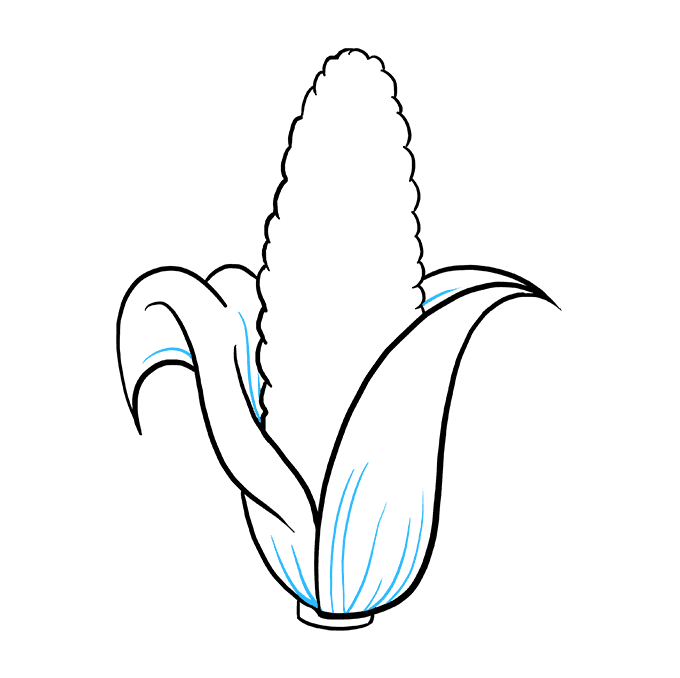 7. ​​​​Detail the husk using curved lines of various lengths. The lines should originate from the cut stalk, the bends in the leaves, and the interior of the husk near the cob.

How to Draw a Thanksgiving Card 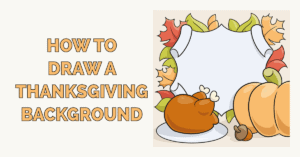 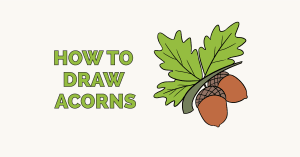 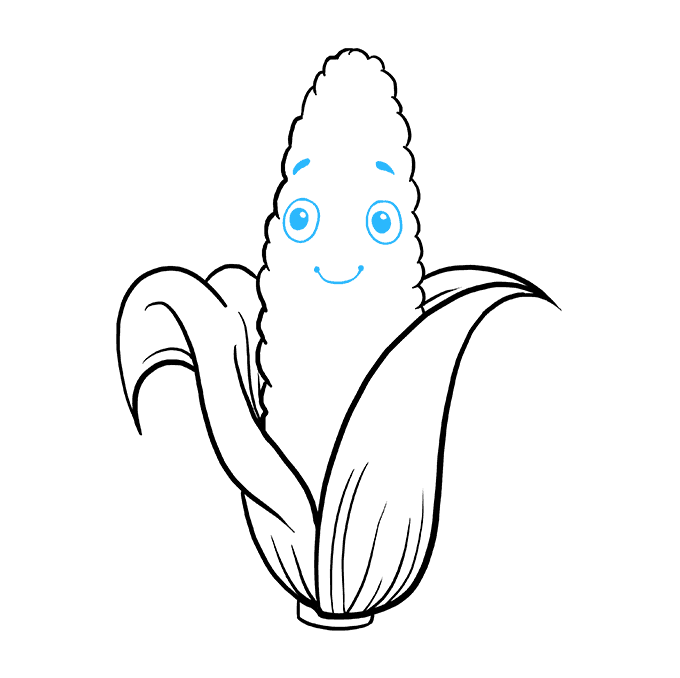 8. ​​​​​It's an ear with eyes! An ear of corn, that is. Draw two circles within the corn cob to indicate the eyes. Within each eye, draw a smaller circle to form the pupil, and a tiny circle for the eye's sparkle. Shade the pupil. Draw a short, thick curve above each eye to indicate brows, and a "U" shaped line to form the mouth. Place a small dot at each end of the mouth.

Complete the Outline of Your Corn Cob Drawing - Step 9 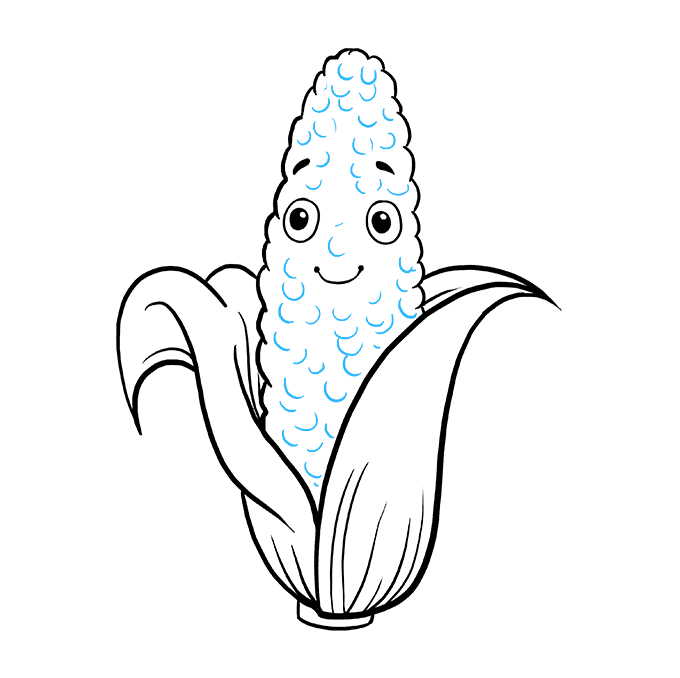 9. ​​​​​​Finally, detail the corn cob with kernels of corn. Do this by drawing small "C" shaped lines all about the cob. Notice that one kernel is strategically placed to form the nose.

10. ​​​​​​​Color your corn cob. Most corn is yellow, white, or a combination of those colors, but Indian corn can come in almost any color of the rainbow, including red, brown, blue, and green.

​Hungry for more? Check out our other fruit and vegetable drawing tutorials, including pumpkins and apples. 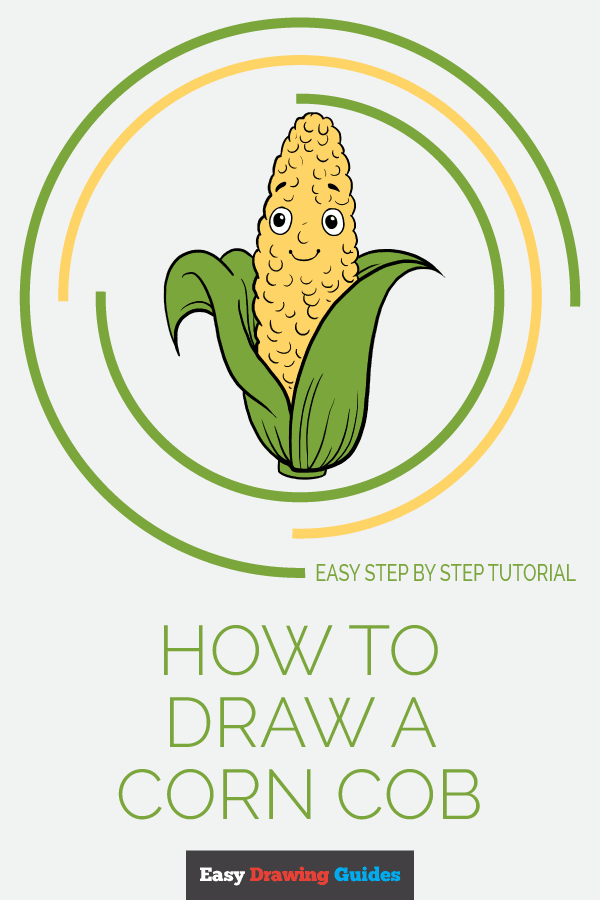 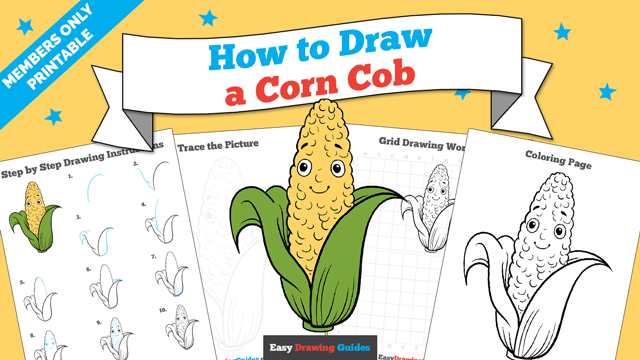