Crossing one's arms can be a form of nonverbal communication, making one's feelings known through gestures and posture. The crossing of the arms may indicate stubbornness, defiance, rebellion, skepticism, or hostility. For example, a child may cross his or her arms when defying the instructions of a parent or teacher. It is often accompanied by a frown.

Crossed arms are sometimes referred to as arm barrier signals. According to one guide, "Crossed arms hold your feelings in and keep other people's out." It can signal that you disagree with an idea or are uncomfortable in a given circumstance. Crossing one's arms may be a holdover from childhood when we instinctively hid behind a solid object - such as a table, chair, or even a parent - if a threatening situation arose.

In some circumstances, crossing the arms can mean something else entirely. It could indicate that the person is cold, as crossing the arms helps retain heat. It may also mean that a person is frightened, uncertain, insecure, or stressed, or that they are protecting themselves from something, such as rain, wind, or flying insects.

The opposite of crossed arms is arms held wide open. This gesture indicates welcome, peace, and open-mindedness. Open arms may be accompanied by a smile.

Did you know? Some animals also cross their arms. Some apes and monkeys, for example, cross their arms over their chests when attacked. This helps protect vital organs such as the lungs and heart.

Would you like to draw a cartoon of a person with crossed arms? This easy, step-by-step cartoon character drawing tutorial is here to show you how. All you will need is a pencil, an eraser, and a sheet of paper. You may also wish to color your completed drawing.

3. Draw a curved line down from the arm to form the side of the torso.

4. Draw a curved line on the opposite side, forming the other side of the torso. 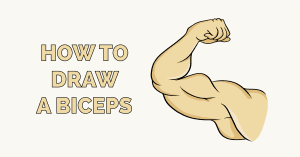 5. Connect the sides using a long, curved line. Draw a curved line parallel to this line to indicate the hem of the shirt.

6. Draw the hand, erasing as necessary. Use a series of overlapping curved lines.

7. Draw the remaining hand, partially hidden by the arm that passes over it. Use two curved lines to connect the sleeve to the arm.

8. Connect the shoulders using a "U" shaped line, forming the neck of the shirt.

How to Draw a Girl with Glasses

9. Draw another "U" shaped line parallel to the neck of the shirt.

Color your cartoon character. Don't forget, you can complete him or her with the help of our people drawing guides. We've got all the essential parts, including eyes, ears, noses, mouths, hair, bodies, and clothing so that you can design your own unique character!

The Complete Crossed Arms Drawing Tutorial in One Image

How to draw: Crossed Arms - all drawing steps