“The harder the conflict, the greater the triumph.”
― George Washington

George Washington was the first president of the United States. Prior to his presidency, he commanded the Continental Army during the American Revolutionary War and served as chairman to the Constitutional Convention, the body that wrote the American Constitution.

Did you know? A number of myths have surrounded the Father of the United States. One is that he had wooden teeth - actually, his false teeth were made of materials such as gold wire and hippopotamus ivory. Another myth is that he chopped down his father's cherry tree then said "I cannot tell a lie." This story was actually the invention of a bookseller in the 1800s.

Although cameras were not yet in existence during his lifetime, we know what George Washington looked like because his portrait was painted many times. Today, he serves as a symbol of America. His likeness can be seen on the face of the quarter dollar coin and the one-dollar bill, as well as numerous postage stamps. Two universities have been named after him, as well as the iconic Washington Monument, an obelisk located in Washington, D.C.

Would you like to draw George Washinton? This easy, step-by-step presidential drawing tutorial is here to show you how. All you will need is a sheet of paper and pencil, pen, or marker.

1. Begin by sketching the shape of the face. Use a series of curved lines. Note the curvature of the hairline, the bulge of the brow, the rounded jawline, and the line that extends to form the neck.

2. Next, draw George Washington's hair. Use a series of overlapping "U" shaped lines at the bottom to form the curls. Use a long, wavy line to outline the top of the hair. Then, texture the hair using many short, curved lines.

3. Begin to draw Washington's garments. Enclose the collar of the shirt using a curved line. Then, use a series of overlapping curved lines to craft the collar, front, and shoulder of his jacket.

5. Extend a line from the jacket to form the remaining shoulder. Connect the two shoulders using a wide "U" shaped line. This gives the drawing the appearance of a bust or statue.

7. Begin to detail Washington's face. Shade heavy curved lines to indicate the eyebrows, and another to form the nose.

How to Draw a Porcupine

How to Draw a Fist

How to Draw a Hand 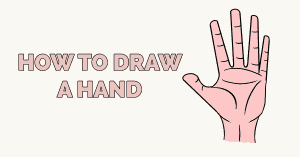 8. Use curved lines, meeting at points on the corners, to outline the eyes. Draw two circles within each eye, and shade the inner circle to indicate the pupil.

9. Use curved lines to draw the flat mouth and detail the chin.

The Complete George Washington Drawing Tutorial in One Image

How to draw: George Washington - all drawing steps