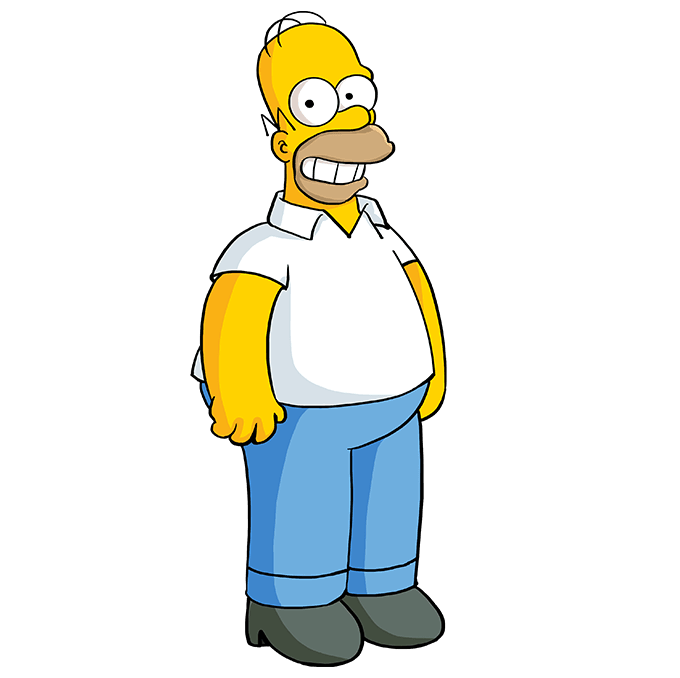 The Simpsons debuted in 1989, and went on to become the longest-running cartoon in history. The satirical comedy captured the hearts of the American public through its depictions of real-world issues and events.

Homer Simpson is one of the show's primary protagonists. He is the husband of Marge Simpson and the father of Bart, Maggie, and Lisa. Homer is named after the father of the series' creator, Matt Groening.

Homer is often depicted as lazy and ignorant, but he has positive qualities as well, including love and devotion to his family and occasional bravery. Homer satirically represents a blue-collar, middle-class, or working-class American. He works at a nuclear power plant and spends his off-hours at Moe's Tavern or watching TV.

Homer and his family have long been considered pop culture icons. Together, they have a star on the Hollywood Walk of Fame. Since 1998, Homer's catchphrase of "D'oh!" has appeared in The New Oxford Dictionary of English, and the Oxford English Dictionary since 2001.

Would you like to draw the comical Homer Simpson? This easy, step-by-step cartoon character drawing guide is here to show you how. All you will need is a pencil, pen, or marker and a sheet of paper. You may also wish to color your finished character.

If you liked this tutorial, see also the following drawing guides: Bart Simpson, Captain Underpants, and Bob the Minion. 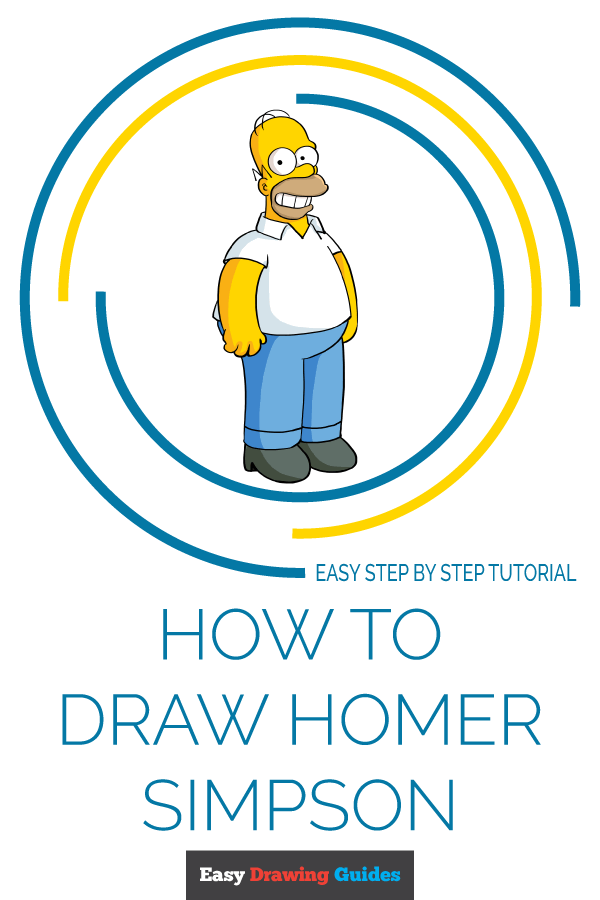 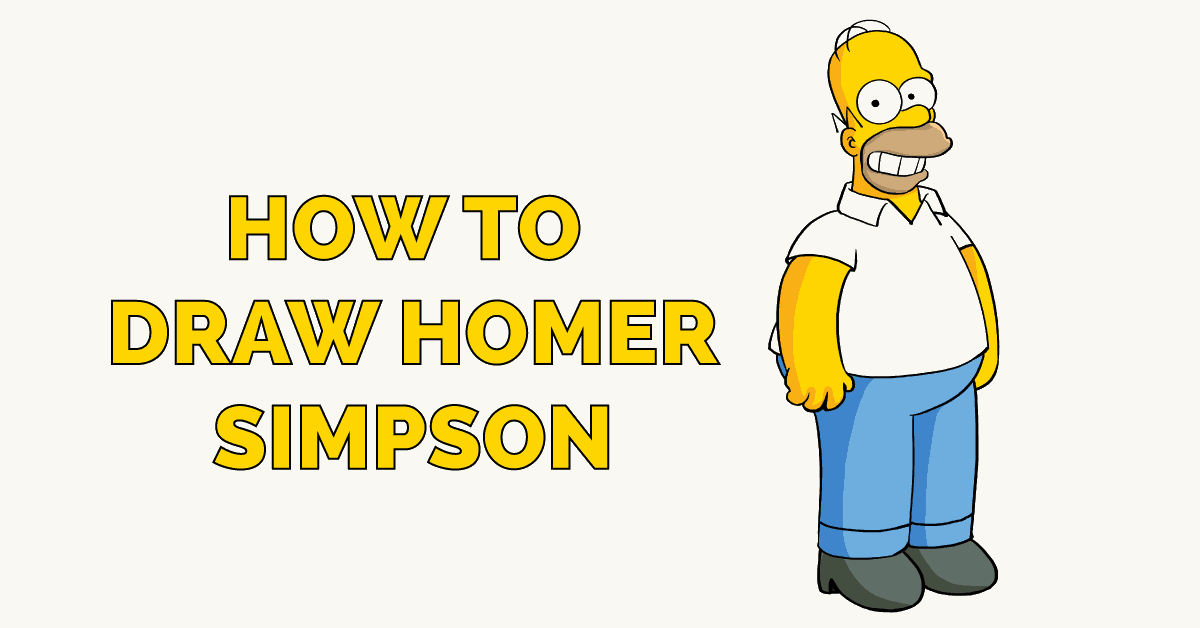 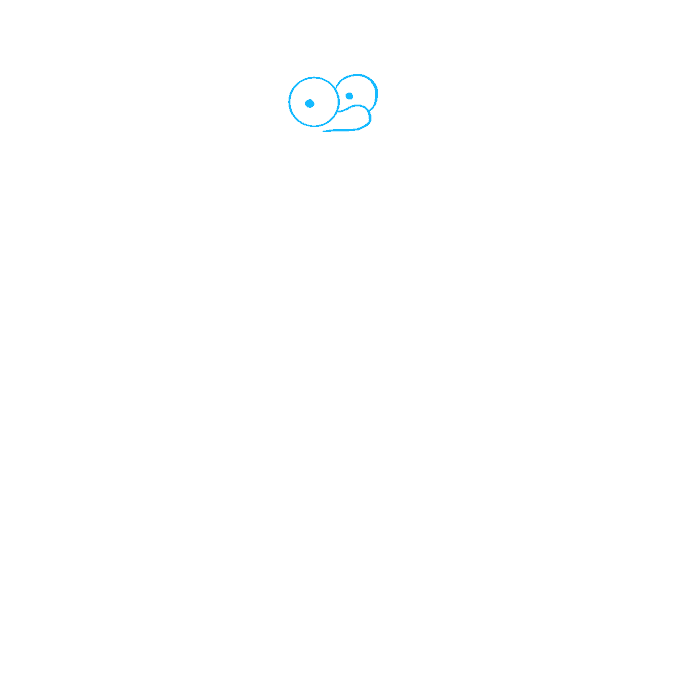 1. Begin by drawing a curved line to form Homer's nose. Resting atop the nose, draw two large circles to outline the eyes. Shade a small circle in each to indicate the pupils. 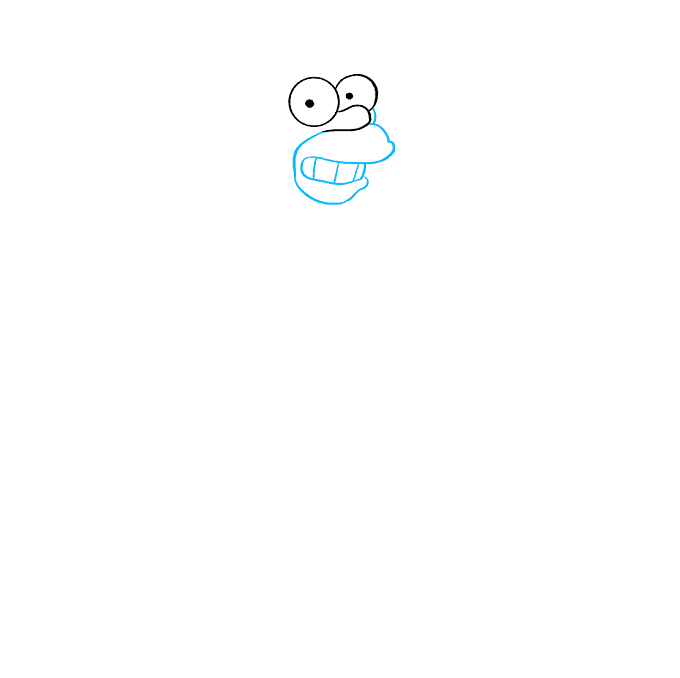 2. Draw Homer's mouth. Extend a curved line from below the eye, looping it below the nose to form the upper lip. Then, double the line back upon itself to form the open mouth. Double it back again to form the lower lip. Then, connect it to the nose. Draw several short, vertical lines between the lips to indicate the teeth. 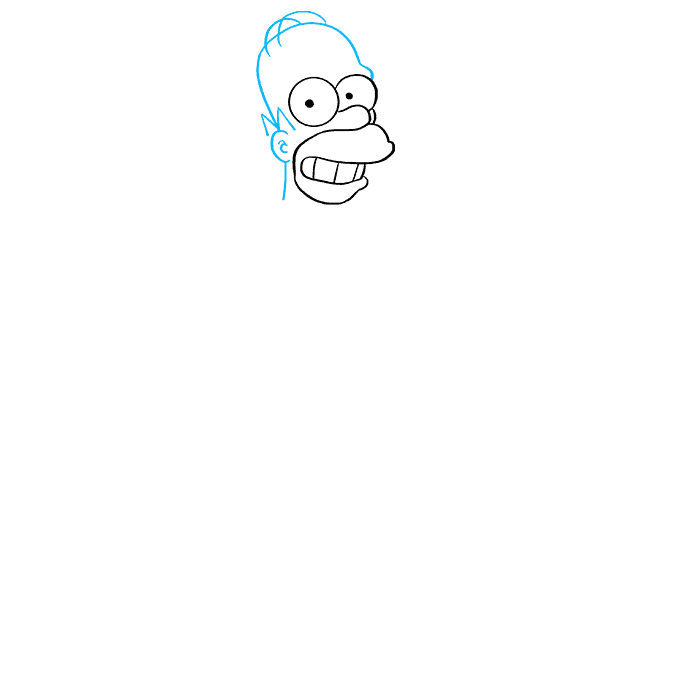 3. Sketch Homer's head. Extend a curved line from the top of one eye, and drape it above the face in a semi-circular shape. Use a "C" shaped line to draw the ear, detailing the inside with short lines. Draw a nearly straight line beneath it to form the neck. Draw curved lines across the top of the head to indicate hair and a small zigzag above the ear for the same reason. 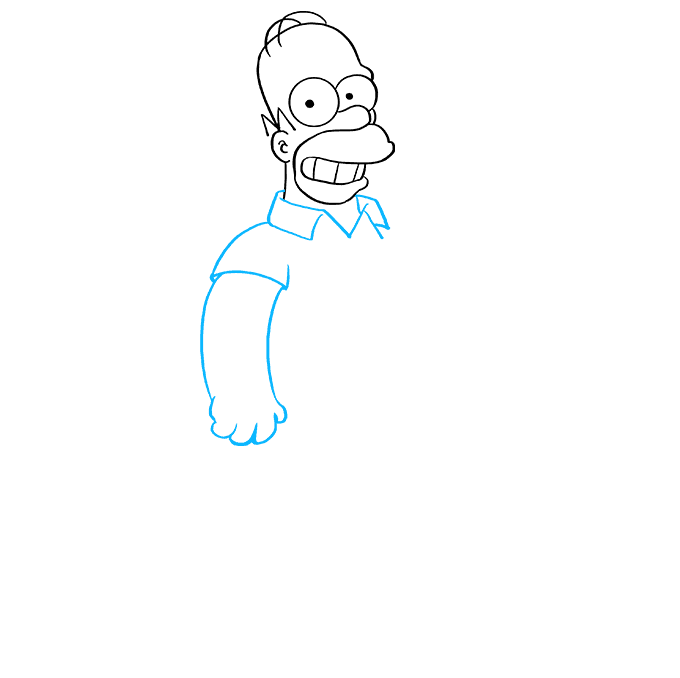 4. Draw an "M" shaped line at the base of the neck to begin the collar of the shirt. Then, enclose the rectangular shape of each side of the collar. Use curved lines to draw the bell shape of the sleeve. Extend a pair of curved lines from the sleeve, forming the arm. Enclose the hand using a series of overlapping curved lines.

How to Draw Charlie Brown 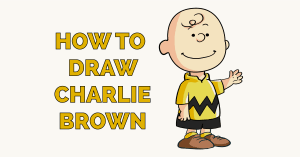 How to Draw Steven Universe 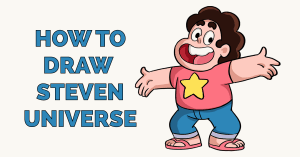 How to Draw a Soldier 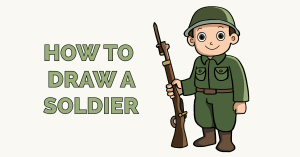 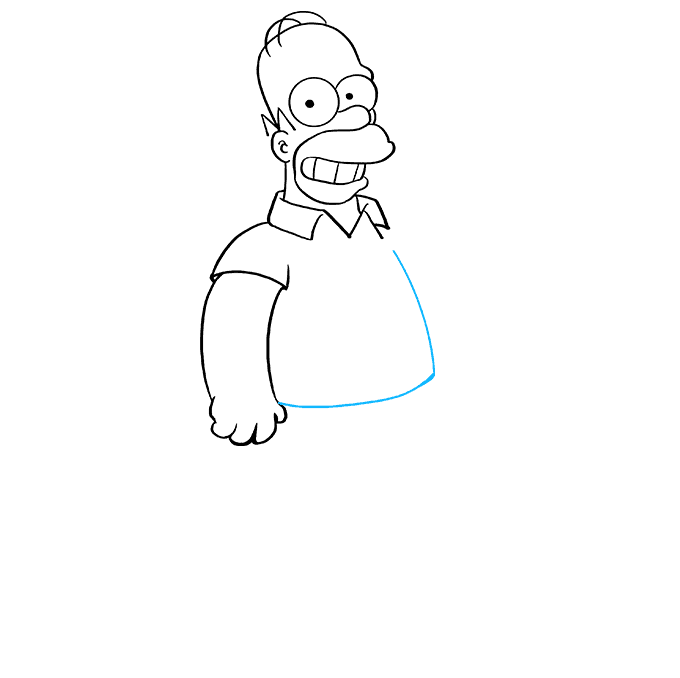 5. Draw the side and bottom of the shirt using curved lines. 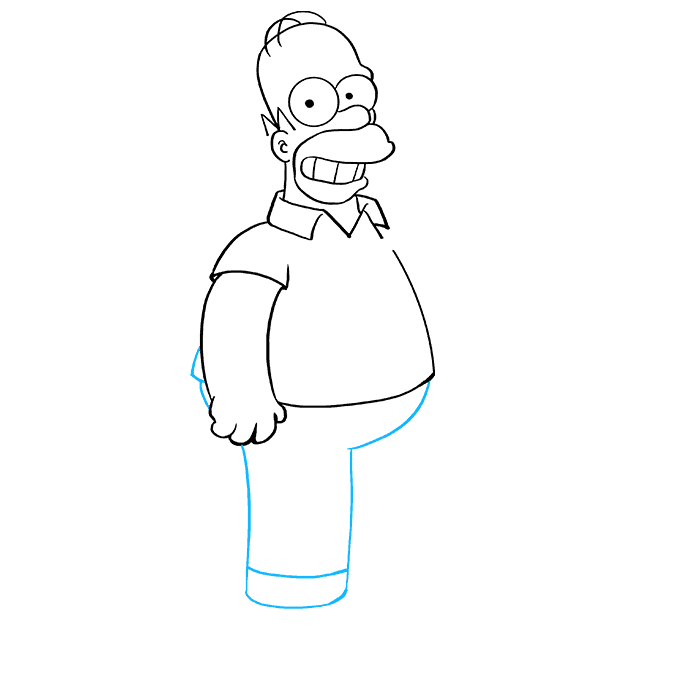 6. Draw a curved line from the front of the shirt, forming the top of the pants. From this line and from the hand, extend a pair of lines to form the pant leg. Enclose the bottom with a curved line. Draw another curved line parallel to the first, indicating the cuff. 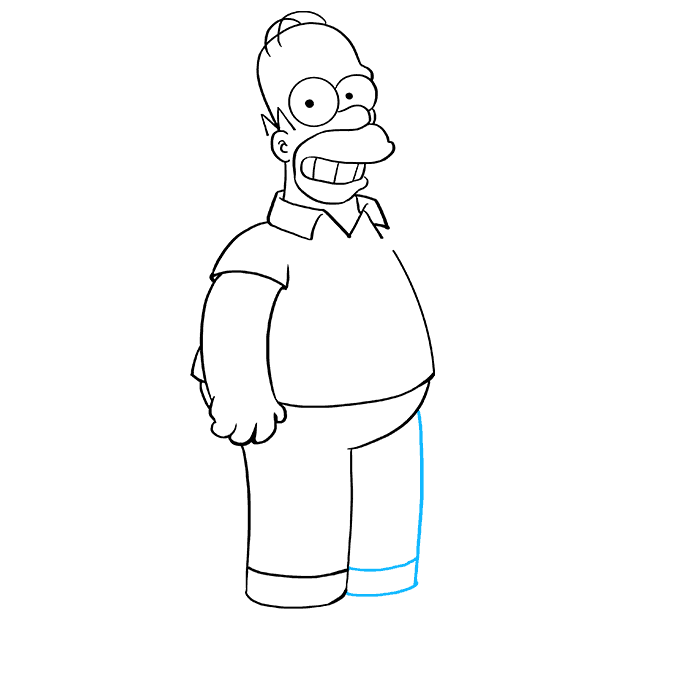 7. Extend a line downward from the front of the pants. Attach it to the other pant leg using two short, curved lines. 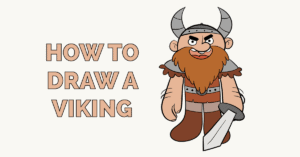 How to Draw Thomas Jefferson 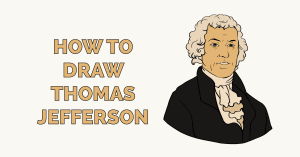 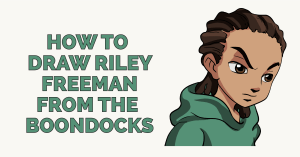 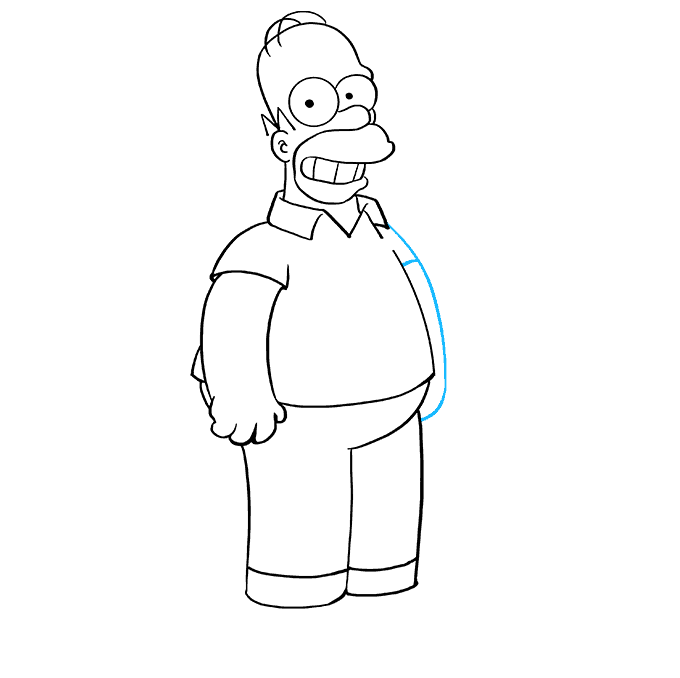 8. Enclose the remaining sleeve using curved lines that meet at a point. Then, enclose the arm using a curved line. 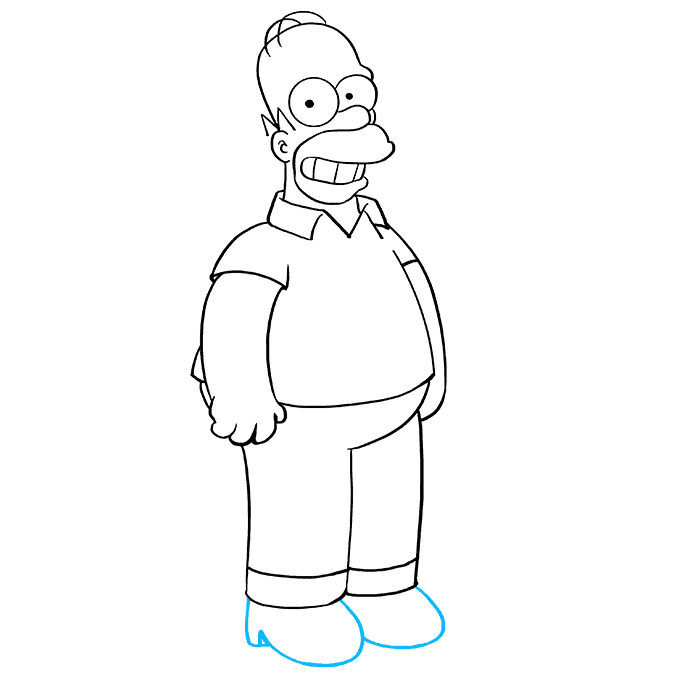 9. Use a curved line to enclose the irregular rounded shape of each shoe.

Color Homer Simpson. He is typically yellow in color. He wears a white shirt and blue pants. 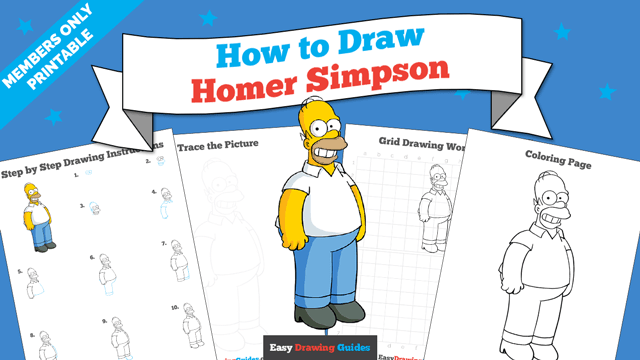