The year was 1902. U.S. President Theodore Roosevelt accepted an invitation to go on a bear hunt. After three days, they had found no bears to hunt. A well-meaning guide tracked down an injured black bear and tied it to a tree for the president to "hunt."

What would the president do? He refused to shoot the bear. Newspapers across the country picked up the story and an illustration of the event was repeatedly published. Later, a New York City candy shop owner began selling toy bears, which he called "Teddy's bears." Thus, the idea of the Teddy Bear was born.

Teddy bears and bear cubs have since played an increasing role in popular culture. In 1926, the first of many Winnie-the-Pooh story books was published. Other popular bear cub characters include Brother Bear and Sister Bear of The Berenstain Bears, Nick Jr.'s Little Bear, and Koda from the animated film Brother Bear.

Would you like to draw an adorable baby bear? This easy, step-by-step animal drawing tutorial is here to show you how. You will need a pencil with an eraser as well as a sheet of paper. You may also wish to color your finished drawing.

If you liked this tutorial, see also the following drawing guides: Red Panda, Deer, and Bear.

1. Begin by drawing an oval. This will form the top of the bear's head.

2. Use a series of curved lines to sketch the cheeks and chin. Notice the lines that meet at jagged points, giving the appearance of fur.

3. Draw a partial circle on each side of the head. This forms the inner ears. Draw the outer ears using a series of short lines, forming a rounded shape around the inner ear. Notice the jagged, furry texture.

How to Draw a Simple Dog

5. Extend two pairs of lines from beneath the bear's face. Notice the furry texture formed by connecting short lines. Use overlapping "U" shaped lines to form the bear's fingers, enclosing the arms.

6. Draw a curved line between the paws. Above it, enclose an oval to indicate the belly.

How to Draw a Rat 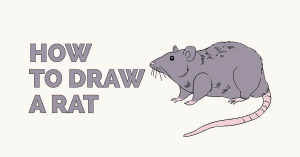 How to Draw a Horse Head

How to Draw a Cartoon Horse

9. Add the final details to your baby bear. Draw a rounded "W" beneath the nose, and enclose the mouth below it using a "U" shaped line. Use curved lines to enclose the tongue, and dots below the nose. Draw a tuft on top of the head, erasing guide lines as necessary. Use short, curved lines that meet in points. Use series of short lines to add a furry texture to the arms and head.

Color your baby bear. Bears can be black, brown, blonde, white, or a combination of colors.

Lions and tigers and bears, oh my! Check out our selection of animal drawing guides. It's a jungle out there.

The Complete Baby Bear Drawing Tutorial in One Image

How to draw: Baby Bear - all drawing steps