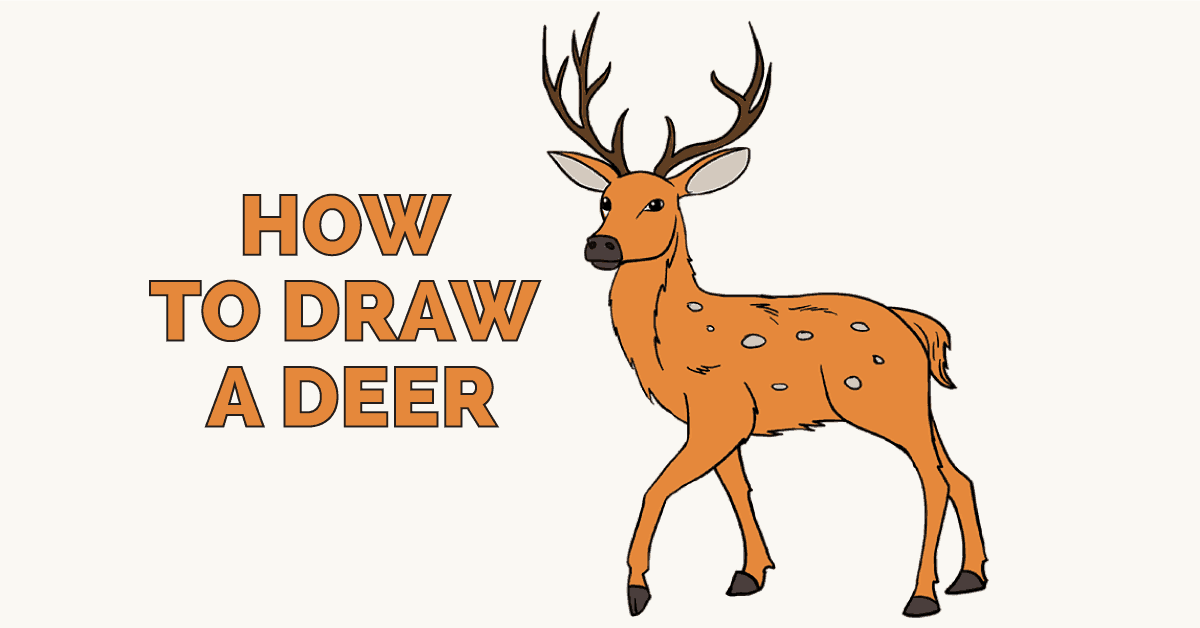 Deer are a versatile and widespread species. Deer are native to every continent except Australia and Antarctica, and they inhabit climates ranging from jungles to forests and meadows to snowy tundras.

Male deer are called "stags" or "bucks", females are called "doe", and the young are known as "fawns". Most fawns are born with a spotted pattern on their fur, but adult deer of some species, such as the sika and chital deer, also wear spots. Similarly, the males of most species sport antlers, or bony horns, while the females do not - with the exception of the reindeer, in which both males and females have antlers. Once a year, deer shed their antlers to grow a new set.

Deer are known to symbolize grace, beauty, peace, and dignity. Would you like to draw your very own deer? Doing so is easy with the help of this simple, step-by-step drawing tutorial. All you will need is a pencil and a piece of paper.

Throughout this drawing guide, new lines are highlighted in blue. You may also want to have an eraser handy to correct mistakes and erase guide lines. You may use paints, crayons, colored pencils, or markers to shade your completed drawing.

If you liked this tutorial, see also the following drawing guides: Cartoon Squirrel, Penguin, and Turkey.

Step-by-Step Instructions for Drawing a Deer 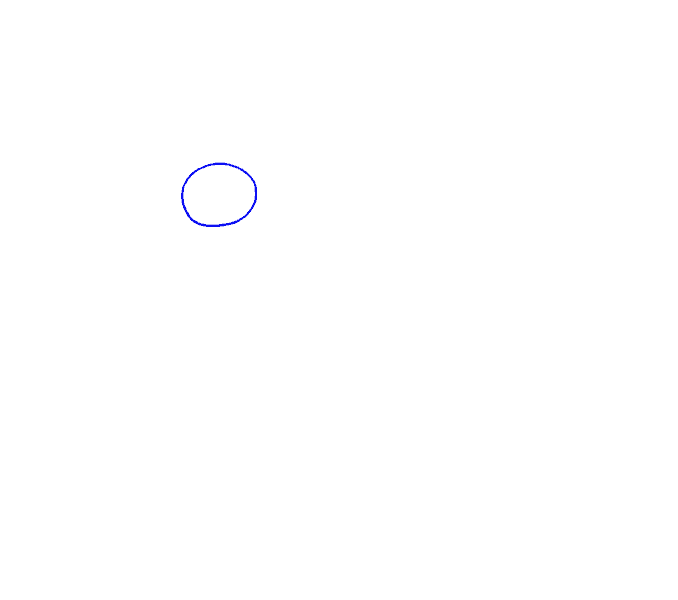 Begin by drawing a small circle. This will form the deer's head. 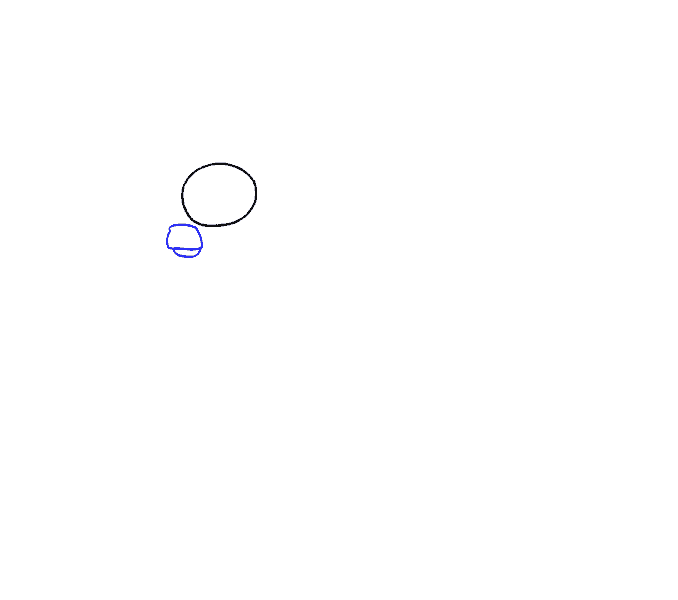 Below the circle, enclose an irregular shape with a flat bottom. Draw a curved line across the bottom. This shape will become the deer's mouth. 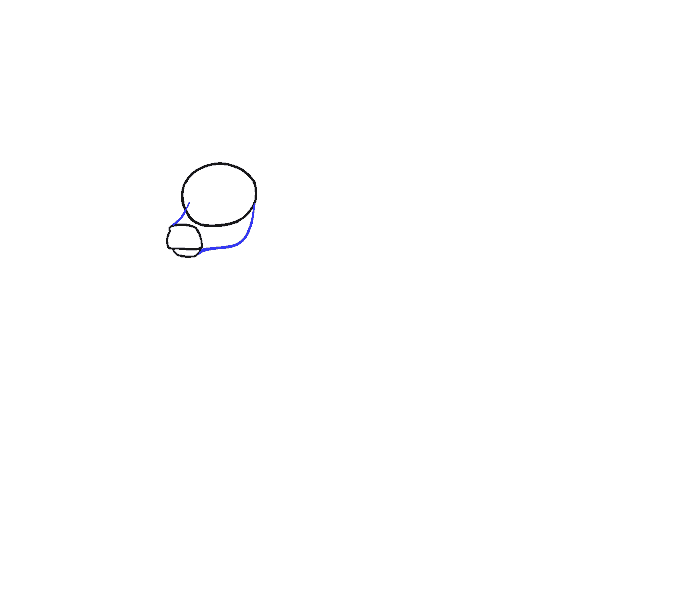 Connect the mouth to the head using two curved lines. 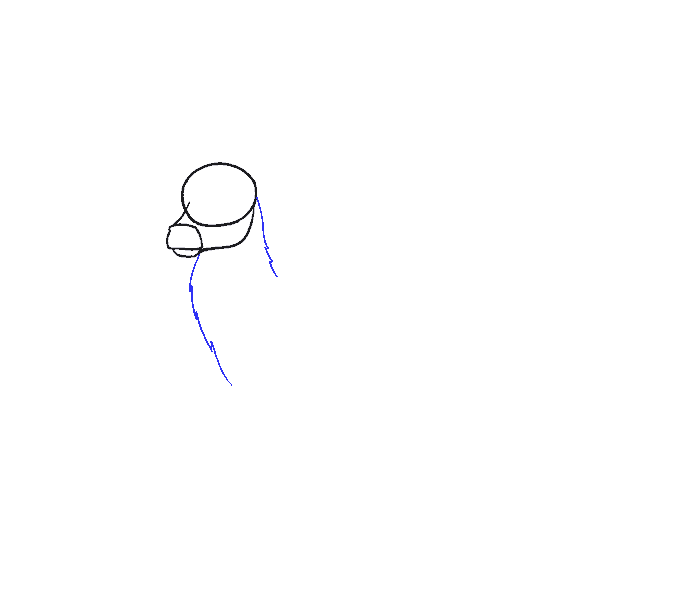 From the back of the head and below the mouth, extend sets of short, curved lines that meet in jagged points. These lines will form the deer's furry neck. 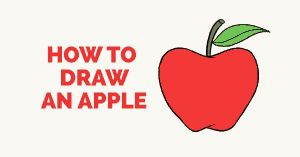 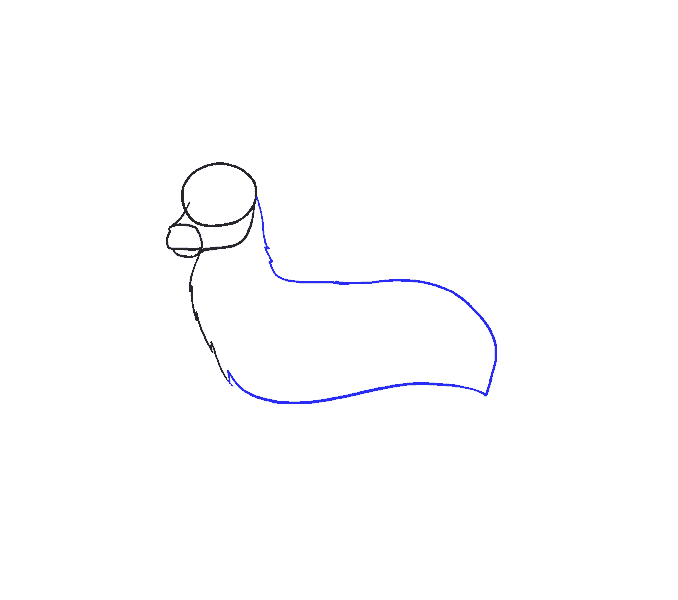 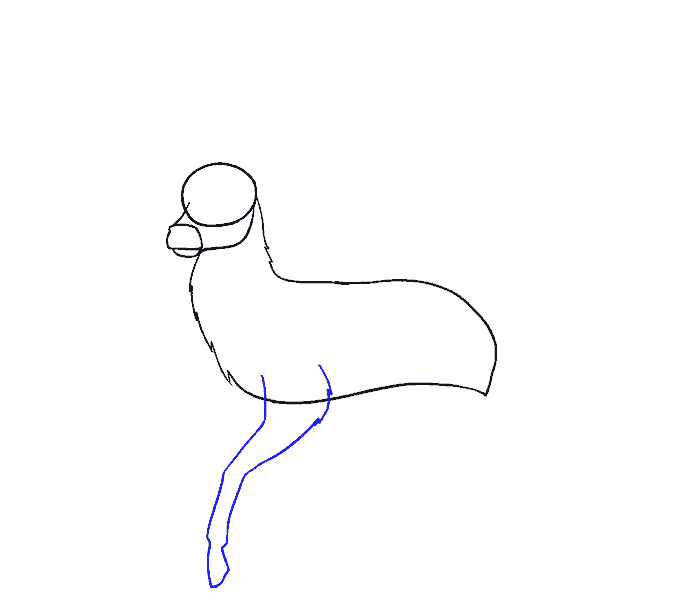 Draw the deer's front leg using a series of curved lines. Notice how the curves of the joints form blunt points, and how the lines converge inward just above the foot. Don't forget the shaggy detail of fur where the leg connects to the body. 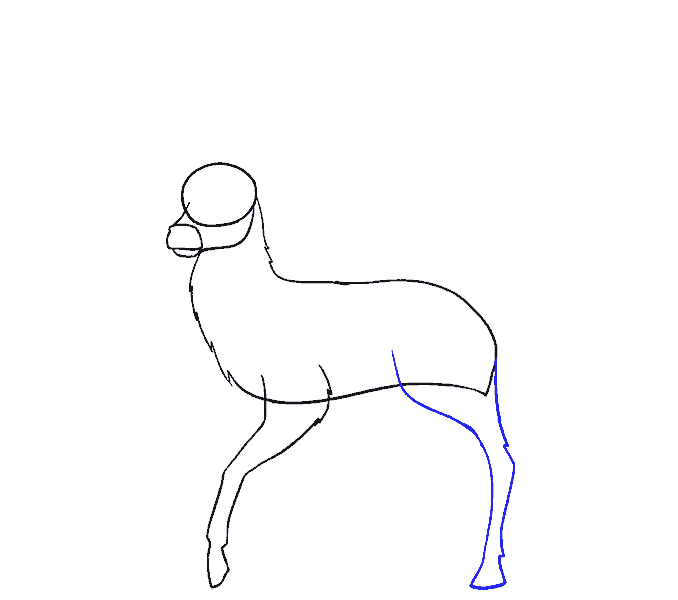 Draw the rear leg using a series of curved lines, paying similar attention to detail around the joints and foot. 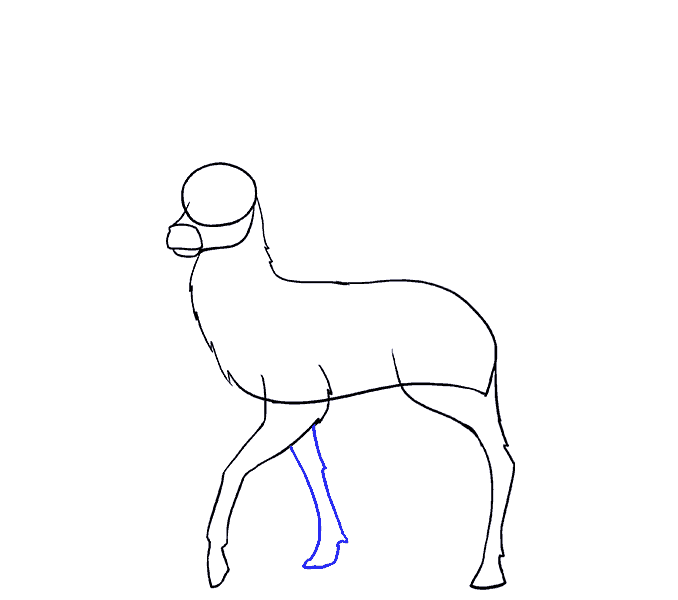 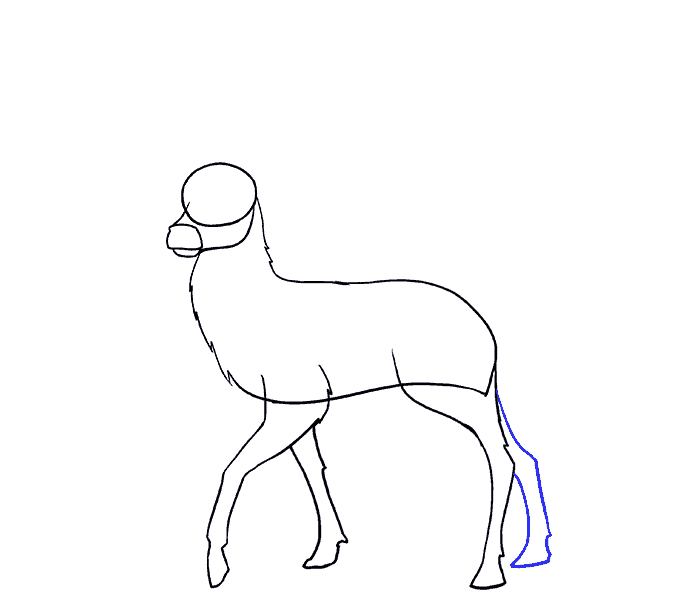 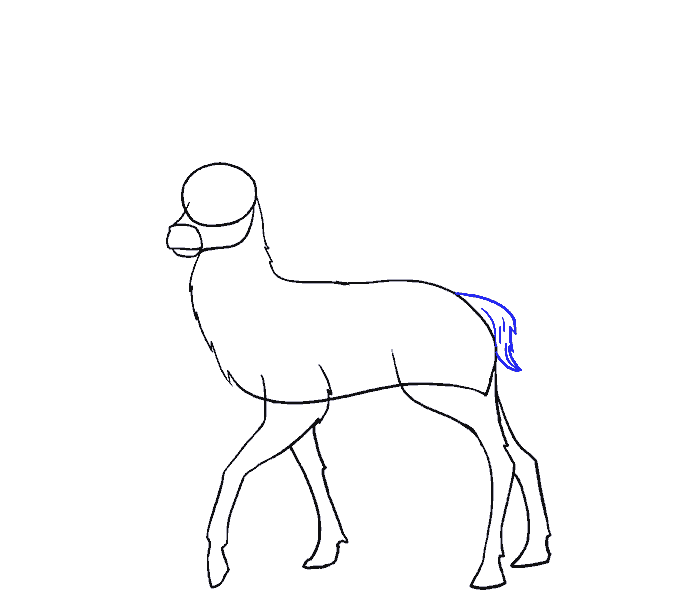 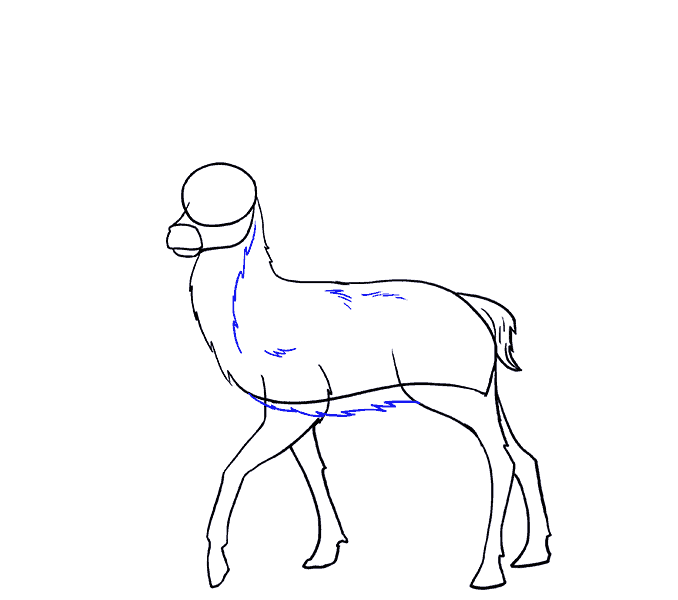 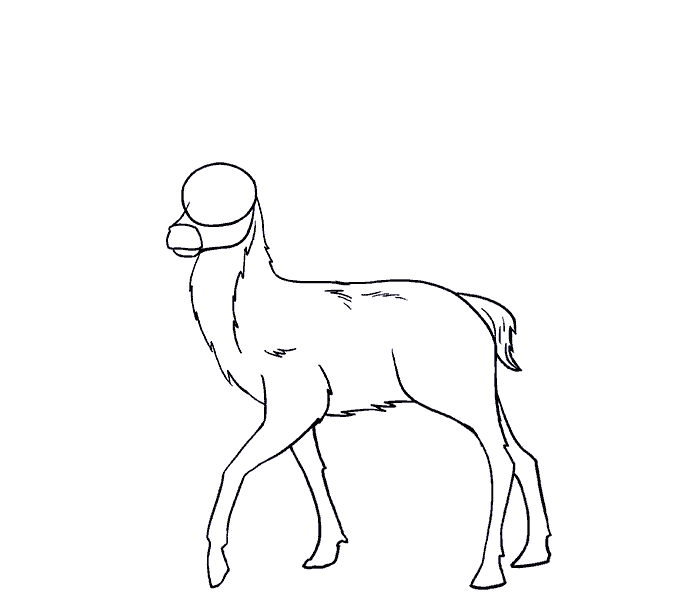 Erase the guide line that crosses the legs and stomach. 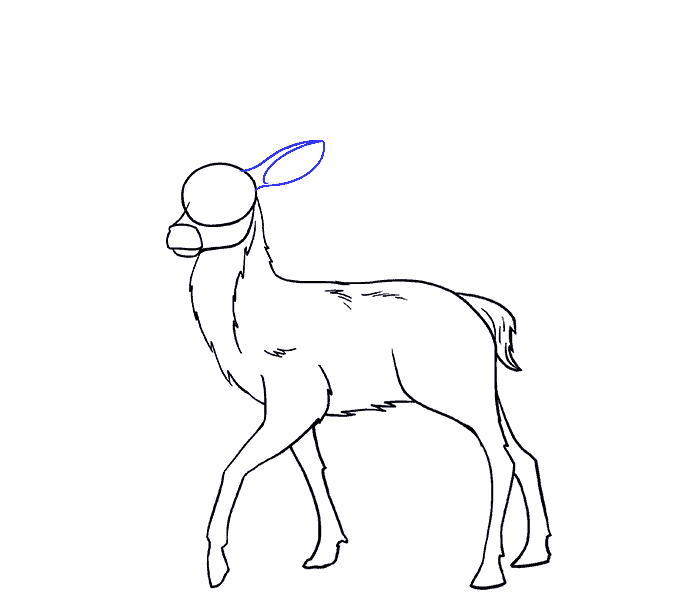 To draw the ear, extend two long, curved lines diagonally from the head, allowing the lines to meet in a rounded point. Using a curved line, enclose an oval shape to add detail within the ear. 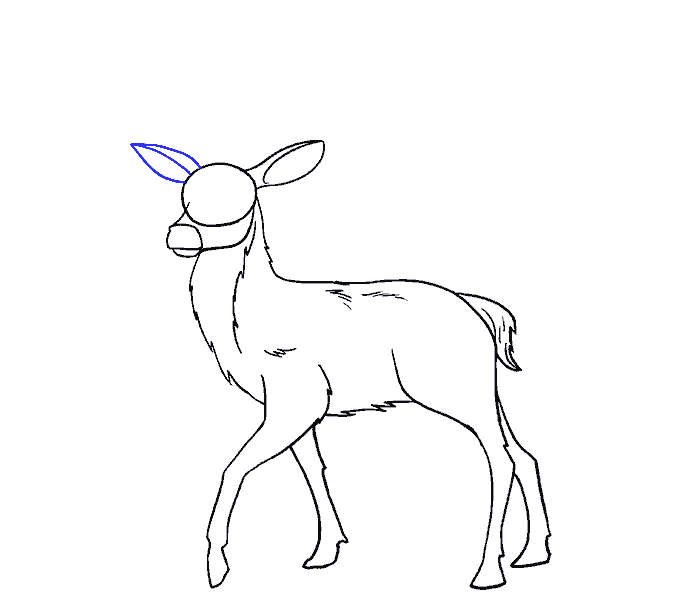 Repeat this process to form the second ear on the other side of the head. 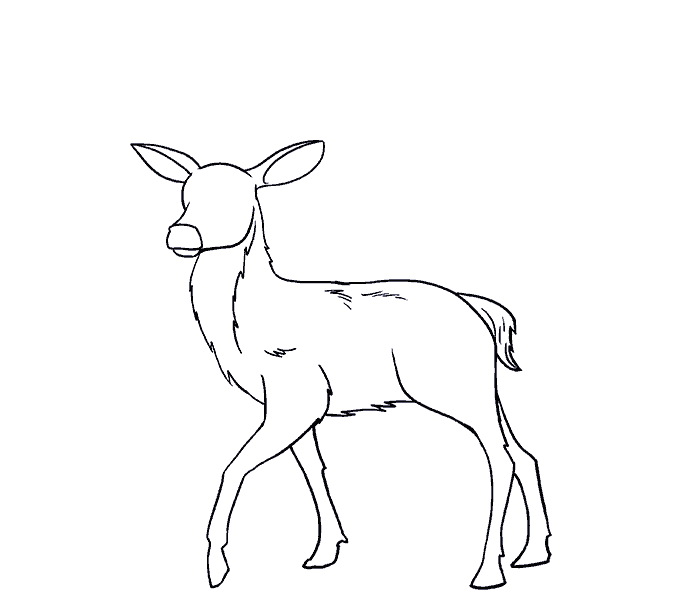 Erase the guide lines formed by the original small circle. 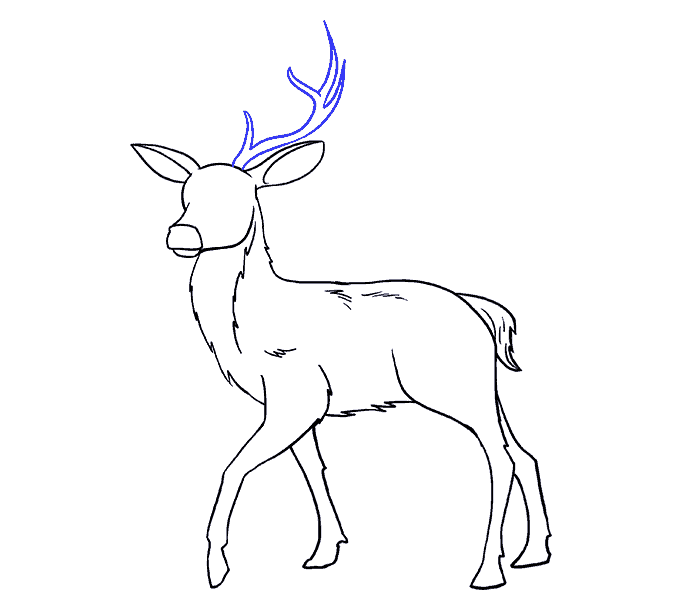 Next, you will draw the antlers. Begin by extending a long, curved line upwards from the head. Extend a shorter line from the head, allowing it to diverge from the first. Draw a third line, beginning at the tip of the second line and extending nearly to the first line. From this point, draw another line parallel to the first, again allowing it to diverge. Repeat this process until you have completed the antler with multiple branches. 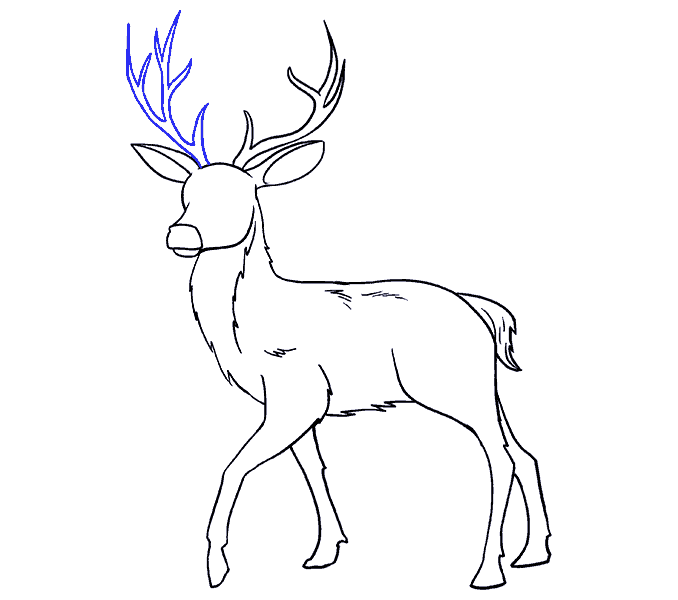 Repeat this process of drawing parallel lines that diverge and branch to form the deer's other antler. 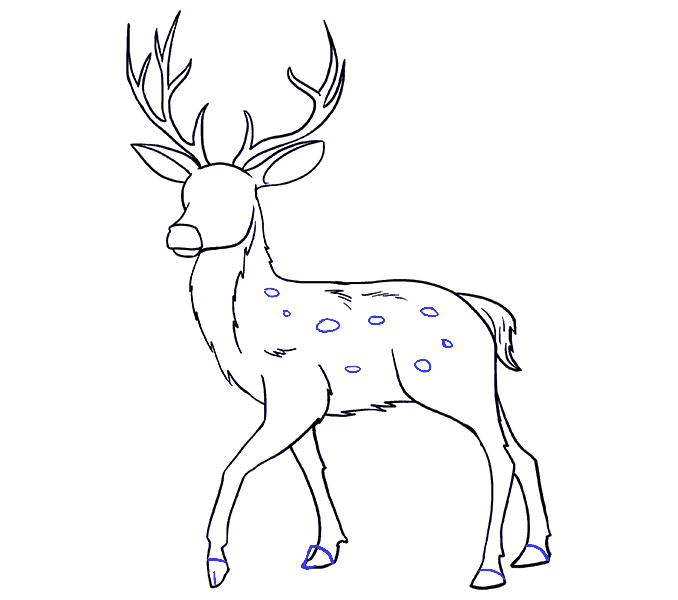 Draw a curved line across each foot to designate the hoof, and draw a short line upward from the bottom of the hoof to indicate the split. Draw numerous, oval shaped spots of different sizes on the deer's body. 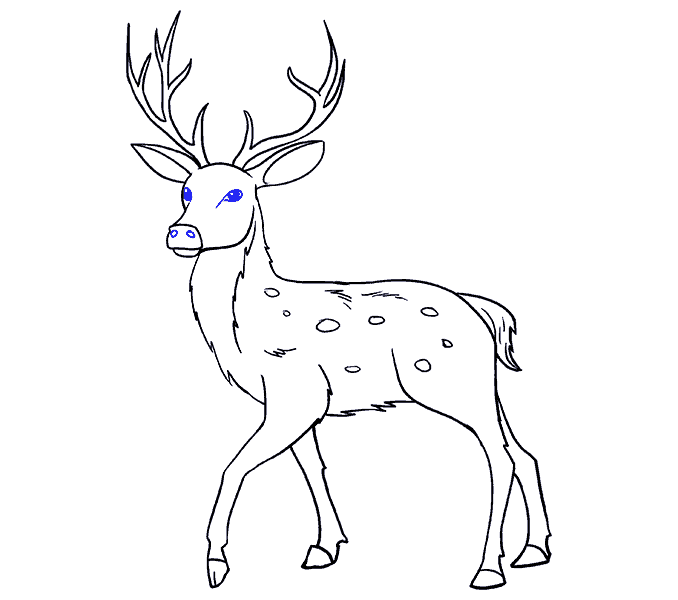 Draw two small ovals on the nose to indicate the nostrils. Draw two teardrop shapes to outline the eyes. Draw an oval within each eye, and a tiny circle within the oval. Shade between the circle and the oval. 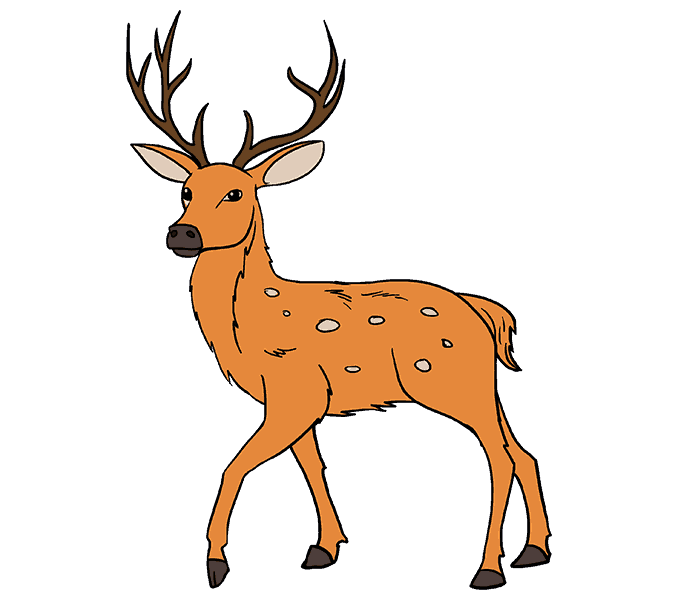 Color the deer. Most deer are tan or brown with white markings.