Badgers are small mammals that live in North America, Europe, and Asia. They dig burrows and are recognized by their distinctive striped markings.

They are in the same family as weasels, ferrets, wolverines, and skunks.

Many folktales and legends have been linked to the badger because "their nocturnal habits have given them an air of mystery."

In China and Japan, they were thought to be shape-shifters. They were depicted in medieval heraldry and are commonly used as mascots today.

There have also been a number of well-known badgers in fiction, from books to cartoons.

These include Beatrix Potter's Tommy Brock and various characters from the Redwall series, The Wind in the Willows, Fantastic Mr. Fox, Incident at Hawk's Hill, Rupert Bear and The Animals of Farthing Woods.

These characters often display real-life badger qualities such as reclusiveness and ferocity in protecting themselves or their friends.

Did you know? Myths about the ability of a groundhog to predict the coming of spring were first assigned to the badger. Before that, the ability was thought to be possessed by bears.

Will your badger see its shadow? Start drawing to find out!

If you liked this tutorial, see also the following drawing guides: Skunk, Groundhog, and Guinea Pig.

Step-by-Step Instructions for Drawing a Badger

1. Begin by drawing an adorable face. Shade a small oval within a larger oval to form each eye. Contour the eyes with curved lines at the top and bottom. Then use a series of overlapping curved lines to trace the snout. Enclose a round shape at the tip of the snout to indicate the nose.

2. Draw a long curved line to form the round top of the head. Then, draw a series of short curved lines to form tufts of fur on the cheeks, and connect them to the snout. Shade a teardrop shape above each eye to indicate the eyebrows.

3. Use two "C" shaped lines to enclose each ear. Then, begin sketching the shoulders and foreleg. Use a series of curved lines to give it a furry appearance.

4. Use overlapping curved lines, some of which meet at points, to complete the foreleg and draw the animal's chest. Enclose a curved triangle at the tip of each toe to form the claws, which are used for digging.

How to Draw Bacteria

How to Draw a Frog 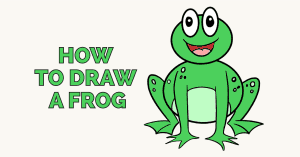 5. Draw the remaining foreleg using curved lines. Again, draw a curved triangle at the tip of each toe.

6. Use curved lines to draw the tuft of fur at the elbow, the belly, the hip, and the first of the rear legs. Enclose a curved triangular claw at the tip of each toe.

7. Complete the online of the badger. Use long and short curved lines to trace the back, the fluffy tail, and the side of the rear leg. Notice how the lines connect at jagged points to give the badger a furry appearance.

How to Draw an Animal Cell

How to Draw an Axolotl

How to Draw a Wolf Skull

8. Use overlapping curved lines to draw the final rear leg. Don't forget to add the triangular claws. Then, detail the leg and side with a furry texture using curved lines.

9. Use a series of curved lines to draw an inverted triangle crossing over each eye. Notice how the lines meet at jagged points to give the texture of fur. These are the badger's iconic stripes. Draw a similar jagged line across the front leg.

Color your smiling cartoon badger. Most badgers are marked with shades of black, white, and grey.

The Complete Badger Drawing Tutorial in One Image

How to draw: Badger - all drawing steps