A ballerina is a female ballet dancer. Professional ballerinas typically begin training before they reach seven years of age, and train six days a week throughout their careers.

Ballet is known for the pointe technique in which a dancer supports their full weight on their tip-toes. Special shoes are required that help to distribute the dancer's weight to avoid injury. The term "on point," meaning correct, may come from the ballet term en pointe, meaning on the toes.

Ballerinas are a common theme in children's books and films. One popular example is Angelina Ballerina, featuring a ballerina mouse in training. The series includes books, cartoons, and a touring ballet. Another example is the Netflix animated film Leap!, which follows the adventures of an orphaned girl who dreams of becoming a ballerina.

Would you like to draw a beautiful cartoon ballerina? This easy, step-by-step cartoon drawing tutorial can show you how. All you will need is a pen, pencil, or marker and a sheet of paper.

Step-by-Step Instructions for Drawing a Ballerina

1. Begin by outlining the ballerina's face. Use a long, curved line, noting the bulge of the chin.

2. Sketch the ballerina's hair. Use wavy lines that frame the edges of the face and meet at the forehead. then, draw another wavy line parallel to each of those on the sides of the face. Allow them to meet at a point, forming tendrils of curly hair. 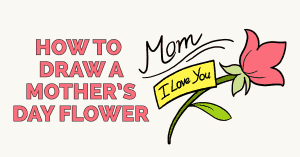 5. Draw the ballerina's arm. Use long, curved lines to outline the arm and narrow "U" shaped lines to enclose the fingers.

6. Draw the other arm. Again, use long, curved lines and narrow "U" shaped lines. Note that the arm appears to pass behind the curl at the side of the face.

7. Draw the skirt of the tutu. Extend long curved lines outward from the base of the torso. Connect them using a long wavy line. Then, draw curved lines rising from both sides of each wave to indicate ripples in the fabric.

8. Draw the ballerina's legs. Outline each leg using a long curved line, allowing it to double back upon itself. Then, draw a curved line across each foot to indicate the ballet slipper. Band each leg with a pair of curved lines and an "X" shape, forming the ribbons used to lace up the slippers.

9. Detail the ballerina's face. Use curved lines to draw the brows, nose, and mouth. For each eye, first enclose a double-pointed teardrop shape. Then draw several successively smaller circles. Shade one to indicate the pupil.

Color your cartoon ballerina. Then, give her an audience with the help of our people drawing guides.

The Complete Ballerina Drawing Tutorial in One Image