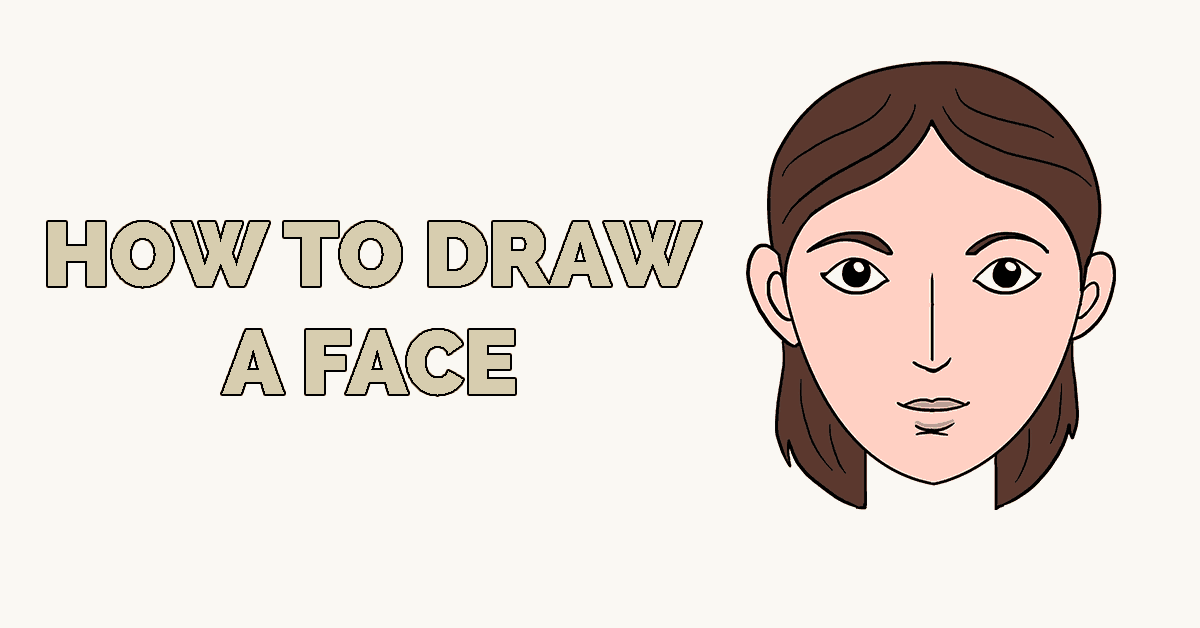 Faces are integral to many forms of art. Almost every depiction of a person includes his or her face. This spans throughout history, with human faces on amulets and in hieroglyphics being among the earliest artwork discovered.

Faces are universally the most visible part of a person, and the meanings behind facial expressions seem to be universal as well - people from around the world demonstrate emotions such as happiness, sadness, fear, and anger in much the same way.

Faces, however, with their intricate detail, are often considered one of the most difficult things to draw. Would you like to master the craft of drawing the human face? Doing so is easier than ever with the aid of this simple, step-by-step drawing guide. All you will need is a pencil, a sheet of paper, and a good eraser.

Note that in each step, new lines are shown in blue while previously drawn lines fade to black. Some steps involve the removal of lines added in earlier steps. You may also wish to use crayons, markers, colored pencils, or paints to complete your drawing.

If you liked this tutorial, see also the following drawing guides: Eyes, Broken Heart, and Hand.

Step-by-Step Instructions for Drawing a Face

1. Begin by drawing a circle to outline the basic shape of the face.

2. Draw a curved line beneath the circle, from one side to the other. Note how the curve deepens at its bottom-most point, forming a blunt point. This outlines the person's chin.

3. Erase the guide lines from the face.

4. Draw guide lines across the face, as these will help you to place the face's other features. To do this, draw a straight, vertical line down the middle of the face. Then, draw two straight, horizontal lines intersecting the vertical line. These will aid in the placement of the eyes. Draw a short, straight, horizontal guide line between the primary horizontal guide lines and the chin. This line will help you to place the nose. Finally, draw a curved line beneath the nose guide line to begin formation of the mouth.

How to Draw George Washington

How to Draw Deathstroke

6. Draw the eyes within the space enclosed by the horizontal guide lines. For each eye, use two curved lines to enclose a rounded shape with the lines meeting in points on each side.

7. Detail the eyes with pupils. Within each eye, draw a circle, and a smaller circle within it. Shade between the circles. Next, draw the ears. For each ear, Enclose a rounded shape on the side of the head using a curved line. Detail the ear by enclosing a smaller rounded shape within the first.

8. Draw the hair. Enclose a larger rounded shape above the top of the head, using a long, curved line. Draw a curved line from the ear to the vertical guide line. Repeat on the opposite side, forming a mirror image. Draw a series of curved lines extending below each ear, allowing some of the lines to meet in jagged points. Enclose the hair by rejoining the lines to the side of the chin.

9. Erase the guide lines from the face. Note that a portion of the vertical guide line remains to form the bridge of the nose. Add detail to the hair by drawing curved lines of various lengths.

10. Color your eyes. In humans, typical eye colors include light and dark brown, blue, green, grey, and at times even violet.

The Complete Face Drawing Tutorial in One Image

How to draw: Face - all drawing steps