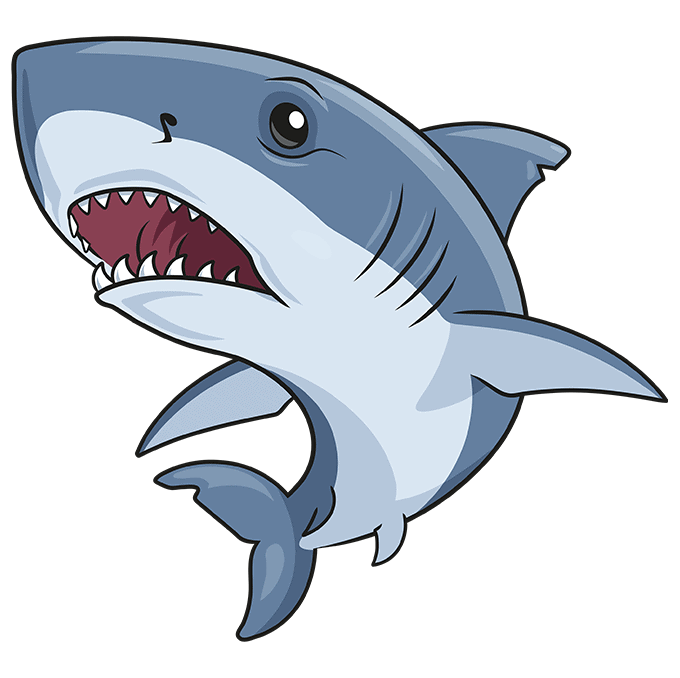 The great white shark, also known as the white shark or white pointer, is the largest extant species of mackerel shark. This animal can grow to a length of 20 feet (6.1 meters) and weigh up to 5,000 pounds (2,268 kg). They may live 70 years or more in the wild.

The great white shark is native to coastal areas around the world. The highest concentrations include areas such as California, USA, Australia, and South Africa. The sharks migrate immense distances each year. The need to migrate is one reason they are nearly impossible to keep in captivity.

Did you know? The great white shark is not a bloodthirsty man-eater. While the species is responsible for a number of shark bites each year, it does not actively hunt humans. The shark may mistake a person for its normal prey, such as a seal or sea lion. Or, it may bite because it feels threatened or is curious about the strange creature in its environment. Divers often seek the opportunity to swim with sharks. Some dive operators "chum" the water with bait and use shark cages to protect the divers.

This shark species was made famous by the 1975 film Jaws and many subsequent thriller movies. A supervillain by the name of Great White Shark resides in the DC Comics universe, and several sports icons, including wrestlers and a golfer, have taken on this nickname. Toys, clothing, decor, and other coastal-themed items often depict this animal. Its teeth are a favorite beach souvenir. First aired in 1988, Shark Week remains a popular annual television event on the Discovery Channel.

Would you like to draw a cartoon shark? This easy, step-by-step cartoon animal drawing tutorial is here to show you how. 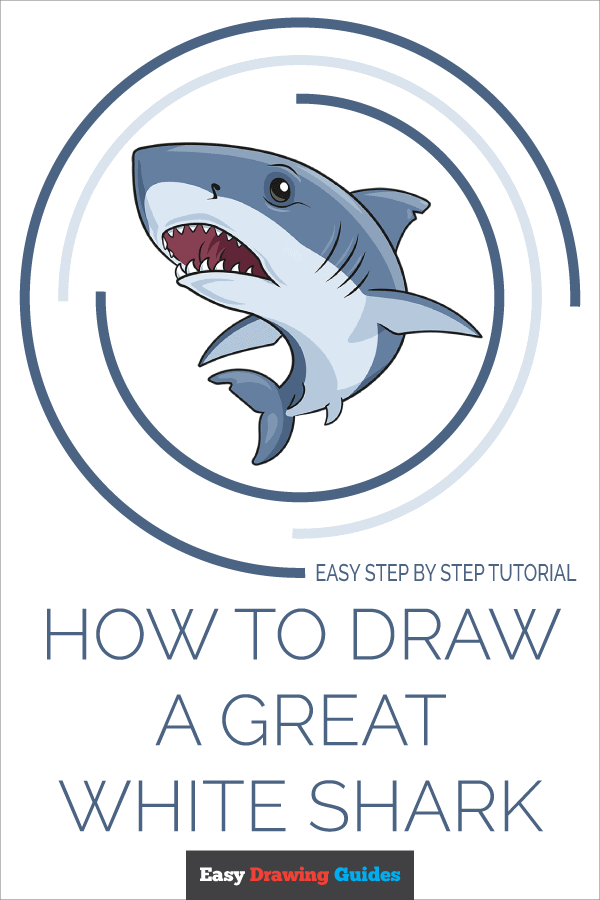 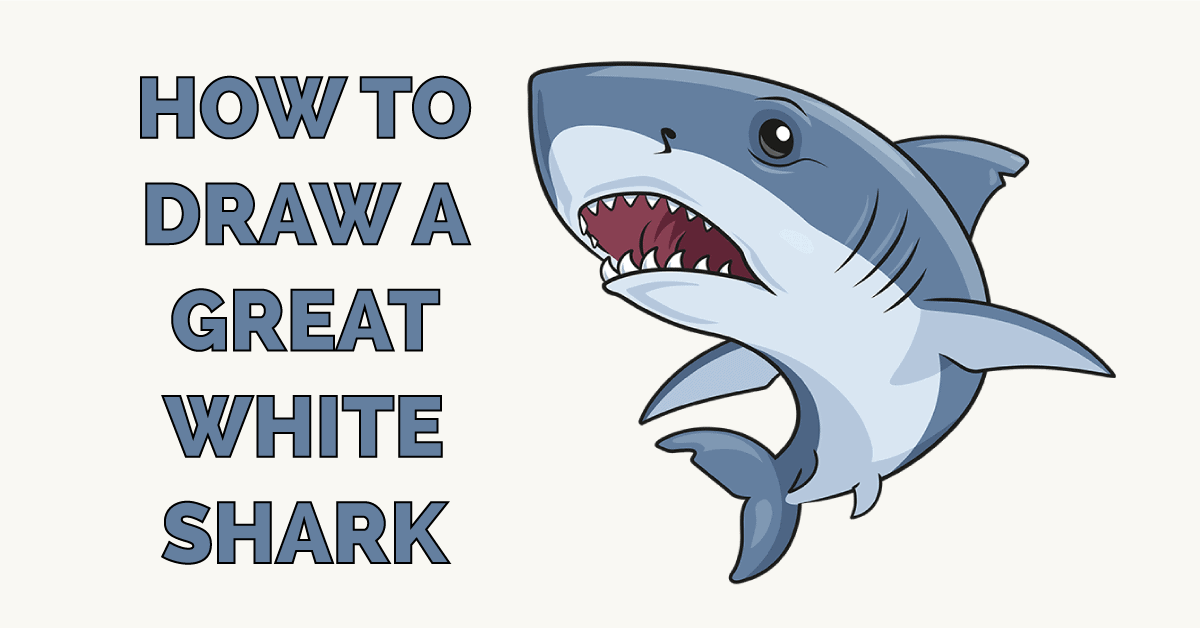 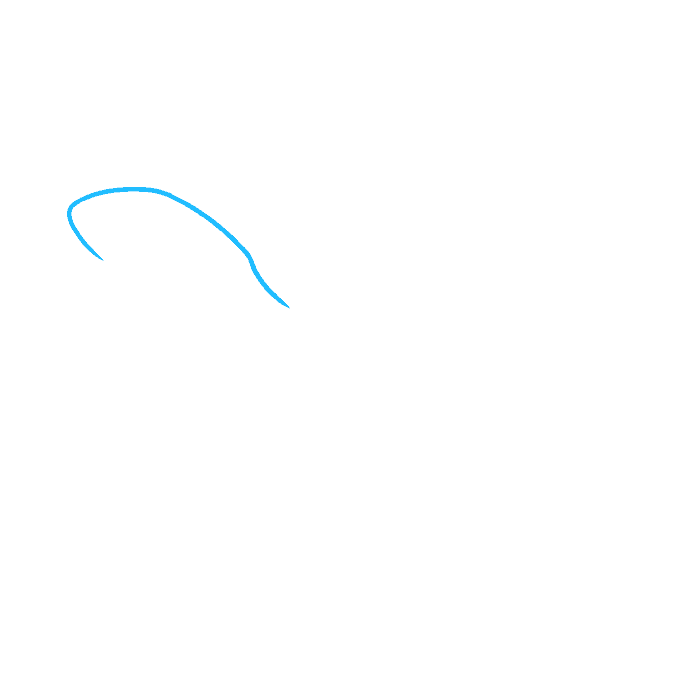 1. Begin by drawing a long, curved line like a sideways letter "J." This begins the outline of the shark's mouth. 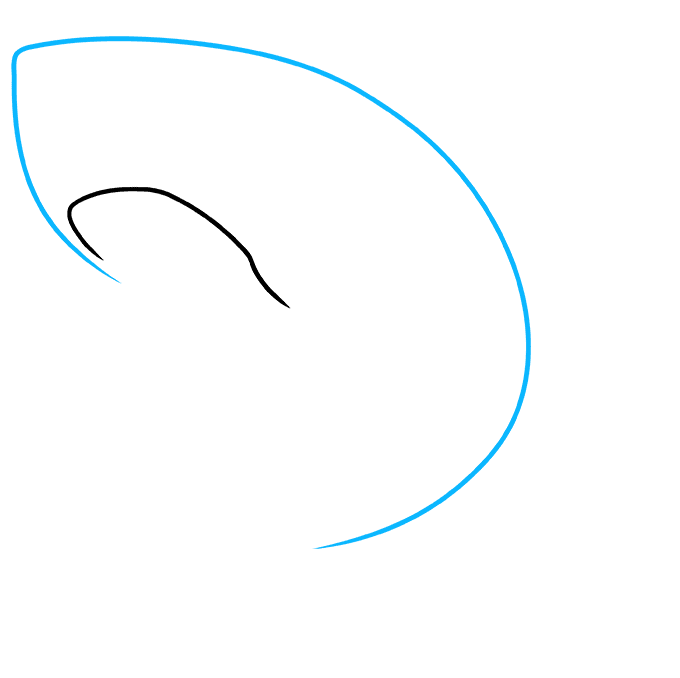 2. Draw another long, curved line encircling the first, outlining the body. Notice how this line is gently pointed at the top, indicating the shark's nose. 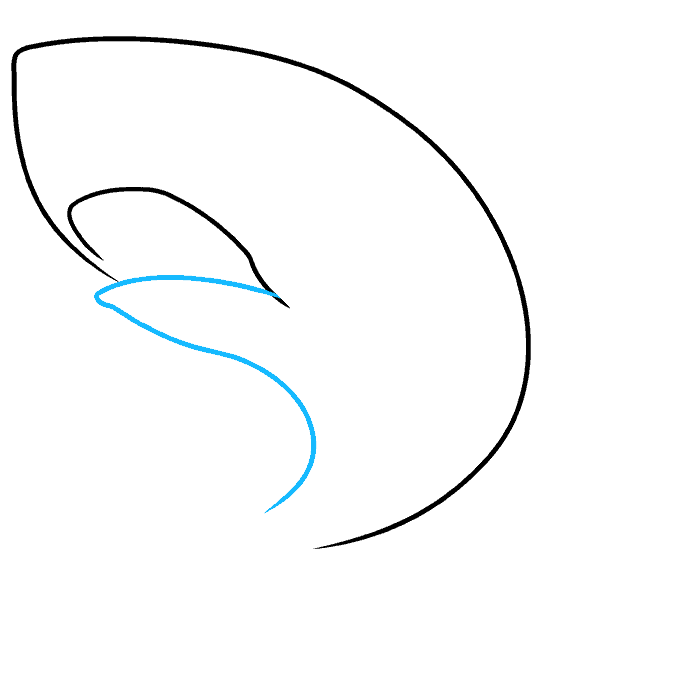 3. Extend a curved line from the bottom of the original line. Double it back upon itself, and loosely follow the curvature of the longest line. This outlines the shark's lower jaw and belly. 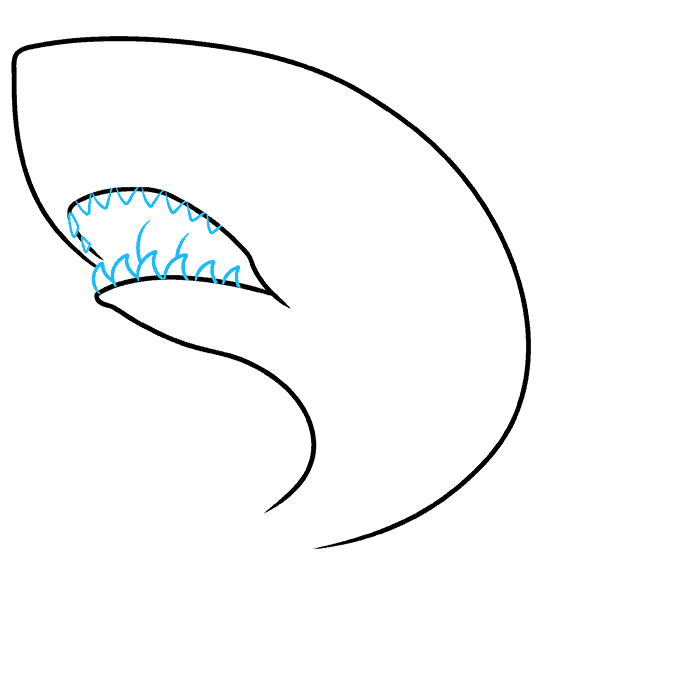 4. Draw the shark's teeth. Use curved lines that meet at points to form the triangular shapes. Draw two curved lines across the inside of the mouth, texturing the throat or gill openings. 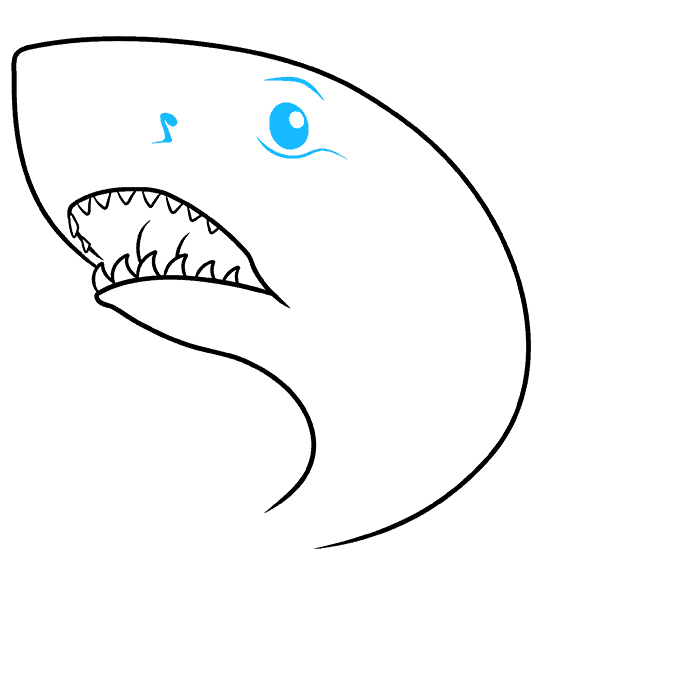 5. Shade a small oval and a short, wide, curved line to indicate the nostril. Draw a circle within a circle to form the eye, and shade between them. Draw curved lines around the eye. 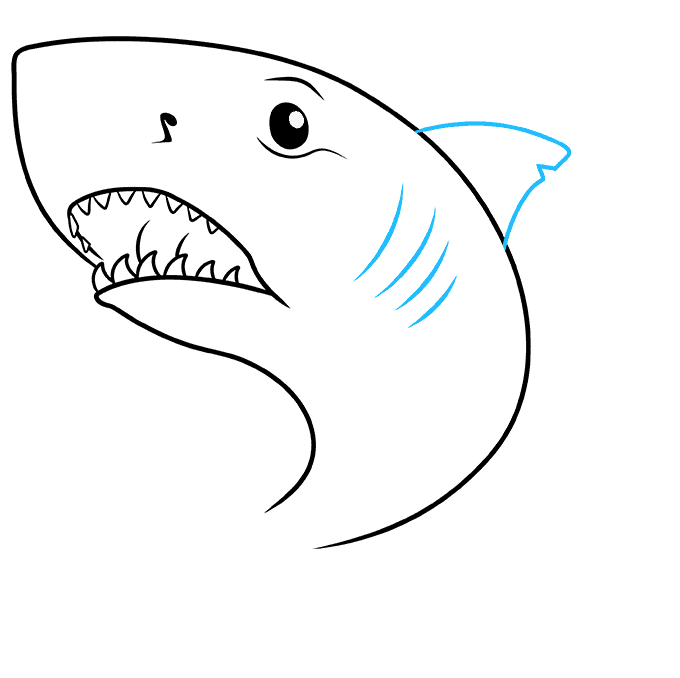 6. Draw parallel curved lines across the shark's side to indicate the gills. Then, draw the dorsal fin. Enclose a triangular shape with a gentle point. Note the triangle-shaped notch in the fin. 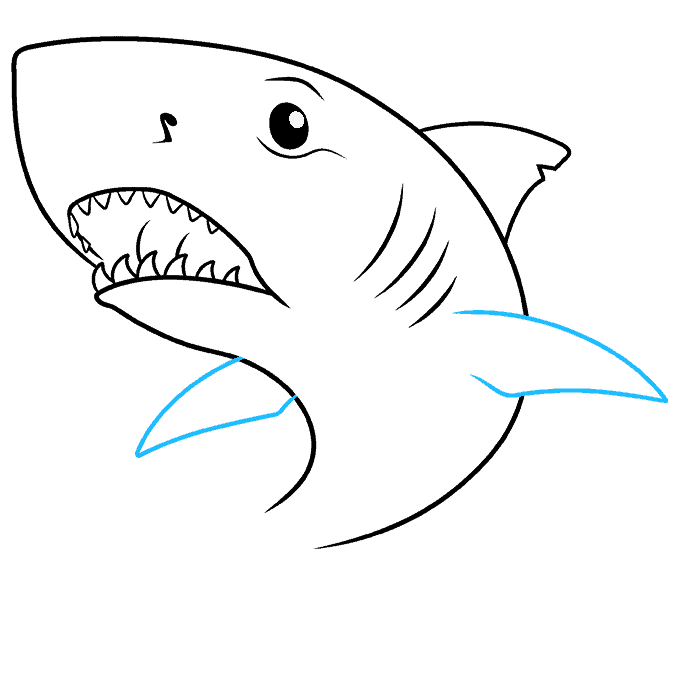 7. Draw the pectoral fins, erasing as necessary. for each fin, extend two curved lines and allow them to meet at a point. Note the bulge of the bottom line near the base of each fin. 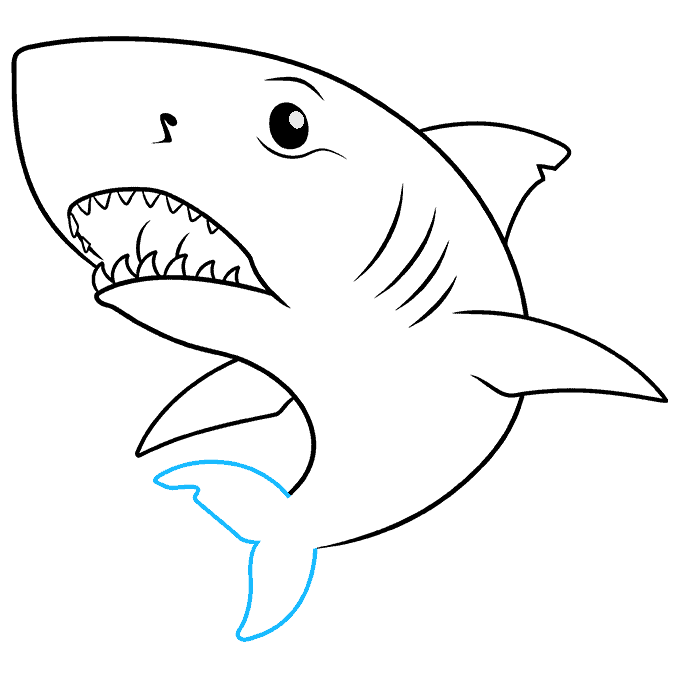 8. Draw the shark's tail or caudal fin. Use curved lines for the outside of the tail, and connect them with a series of curved lines. Notice again the curved notch taken from the tail. 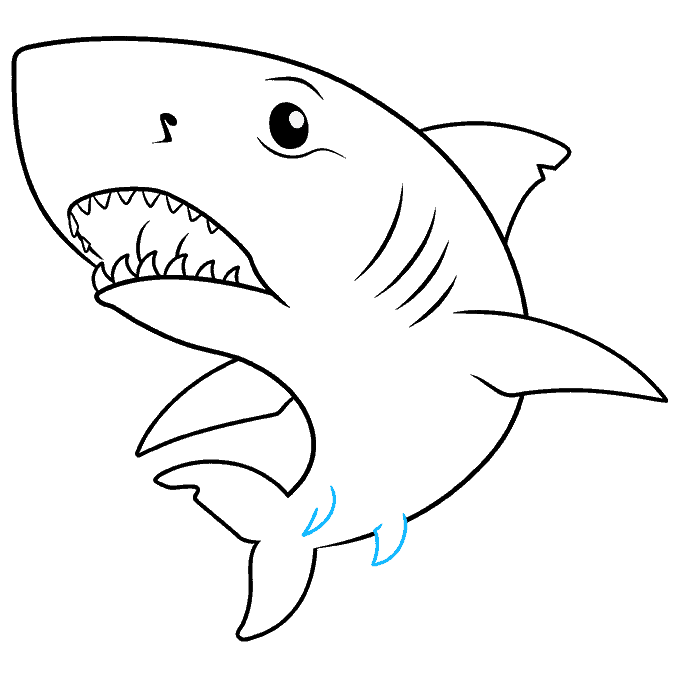 9. Draw 2 additional, smaller fins close to the Great White Shark’s tail. For each fin, extend two curved lines and allow them to meet at a point, erasing as necessary.

Color your great white shark. Contrary to its name, this shark is not really white in color. It is typically grey above and cream below. Cartoon sharks are often depicted in shades of blue and white.

Then, fill the seas with your creations with the aid of our animal drawing guides. 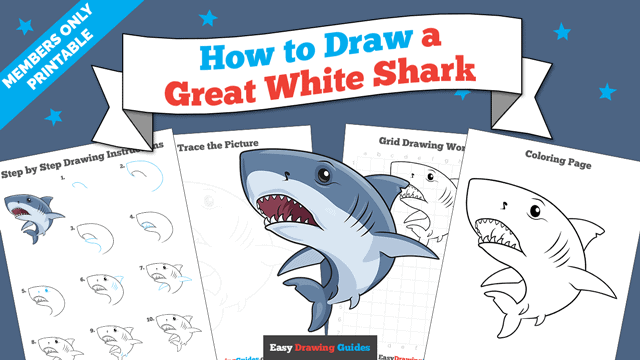