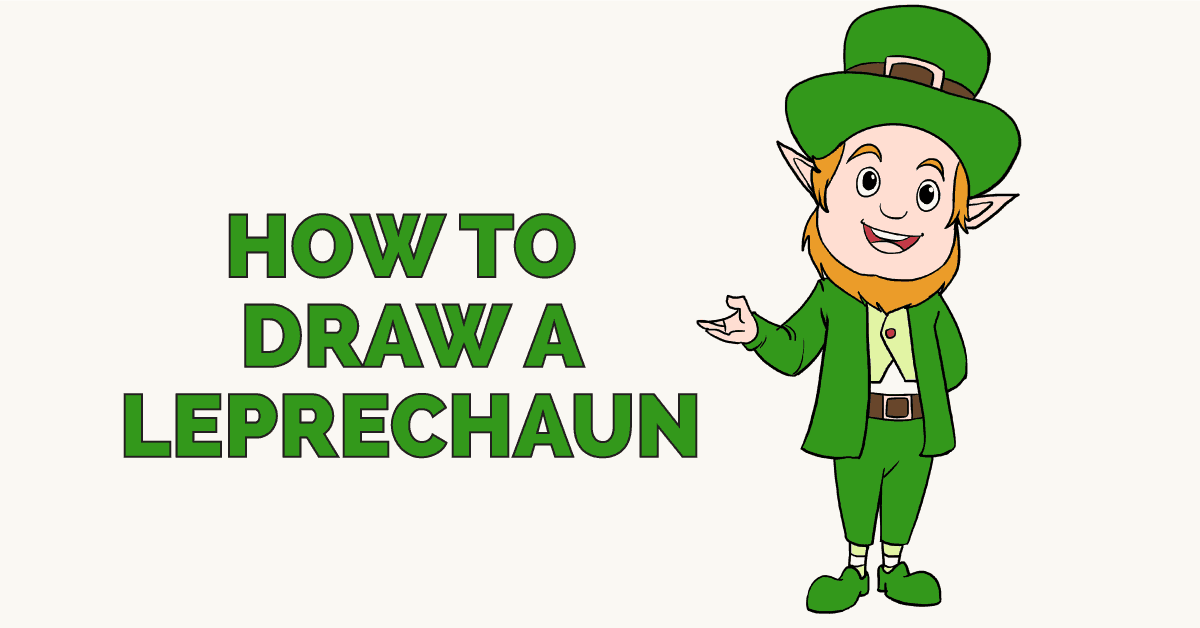 Leprechauns are a legendary figure of Irish folklore, and they have been adopted as a symbol of St. Patrick's Day.

By definition, they are fairies in the form of old men. In fact, in the Old Irish language, the word for leprechaun means "little body."

Leprechauns are said to be solitary, living far away from people. They are often depicted as craftsmen, making shoes or other items. They are also said to have pots of gold, which they collected from buried treasure stores in times past.

The earliest mention of a leprechaun is in a medieval story called "Adventure of Fergus Son of Leti."

In the story, King Fergus falls asleep on a beach, and when he awakes, he is being dragged into the water by three leprechauns. He catches them, and they grant him three wishes in exchange for their release.

Would you like to draw a leprechaun? All you will need is a pencil, a sheet of paper, and an eraser.

You may also wish to use crayons, colored pencils, or other implements to add color to your finished drawing.

If you liked this tutorial, see also the following drawing guides: Shamrock, Pot of Gold, and Cross with a Rose.

​Step by Step Instructions for Drawing ​a​ ​Leprechaun

1. Begin by drawing a circle. This will outline the leprechaun's face.

3. Using short curved lines, sketch the jagged edges of the beard and tufts of hair near the ears.

4. Draw the leprechaun's jacket. Notice the long lines that form closure of the jacket, and the shorter lines used to shape the sleeves.

5. Next, draw the leprechaun's pants. Across the stomach, draw parallel curved lines to form the belt. Then, use longer, nearly straight lines to outline the legs of the pants. Connect the pant legs at the bottom using short, curved lines.

7. Use elongate, "U" shaped lines, as well as curved lines, to form the hand. Extend a pair of short lines from each pant leg. Use a long, curved line to enclose the form of the shoe. Notice the curve that forms the tongue of the shoe, and the overlapping that distinguishes the shoe's heel. Finally, ring the legs with horizontal lines to indicate the socks.

How to Draw a Flower Bouquet

8. Erase guide lines from the face, then draw the hat and ears. For the brim of the hat, extend a long, curved line from one side of the head. Bring it over the head and attach it at a similar point on the opposite side. Draw the top of the hat by enclosing a similar shape, using a shorter curved line. For the ears, draw a steep, slightly curved triangle on each side of the head. Then, draw a smaller triangle within each.

9. Enclose a rounded rectangle within another rectangle above the brim of the hat, forming a buckle. Extend a curved line from each side of the buckle to the side of the hat. For each eye, draw a circle within a circle, and shade the pupil. Draw a curved shape above each, forming eyebrows. Draw the mouth using two curved lines, and place two more within it to indicate the teeth and tongue.

10. Color your leprechaun. Typically, leprechauns are depicted in green clothing and with red hair.

The Complete Leprechaun Drawing Tutorial in One Image

How to draw: Leprechaun - all drawing steps