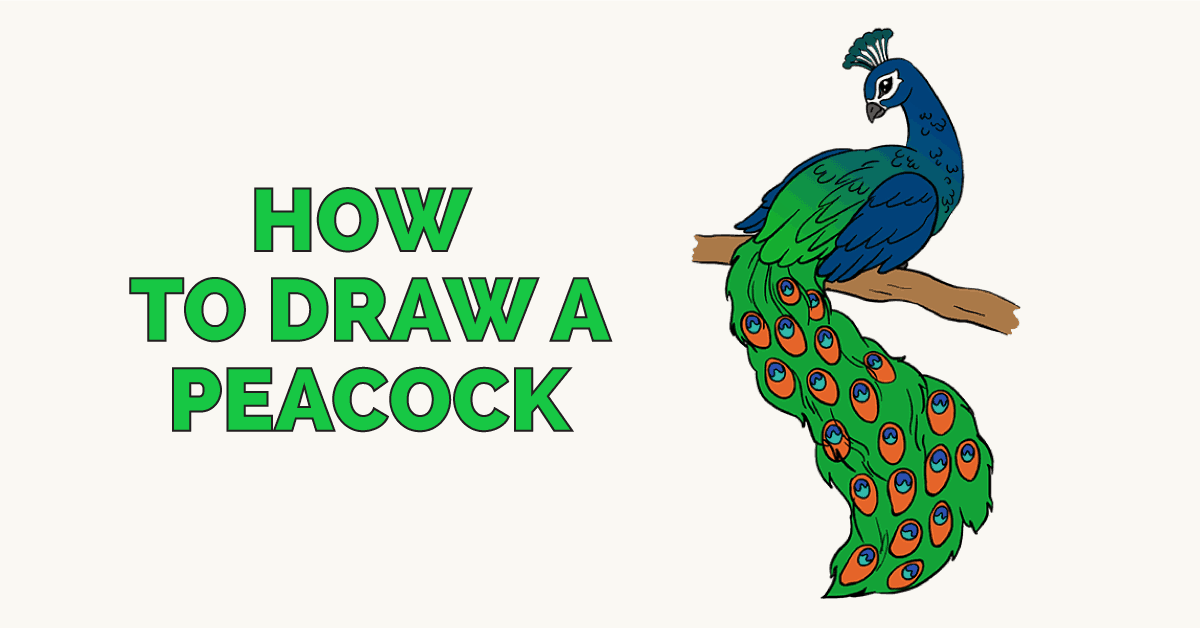 Peacocks are among the most beautiful birds in the world. Similar in size to the turkey, peacocks are famous for shrill call, their bright colors, and their long, flowing tails.

Peacocks are native to Asia and Africa, but are raised in captivity all over the world.

Did you know? Only males have the extravagantly feathered tails. The term "peacock" technically only refers to the male of the species. Females are called "peahens," and mixed groups are known as "peafowl"

Peacocks have been included in artwork for millennia. Once considered vehicles to the gods and protectors of royalty, both real and painted peacocks could be found in ancient palaces.

The Greeks revered the peacock as a symbol of immortality, and this iconography was later used in European Christian art.

Perhaps the most notable modern use of a peacock image is that of the NBC television network emblem, which has been used since 1956.

Would you like to draw your own graceful peacock? Doing so is easy with the help of this simple, step-by-step drawing tutorial.

All you will need is a pencil and a sheet of paper, but likely you will wish to color your finished drawing as well. Peacocks display stunning colors, ranging from blue, green, yellow, and brown, to grey or solid white.

Step-by-Step Instructions for Drawing a Peacock 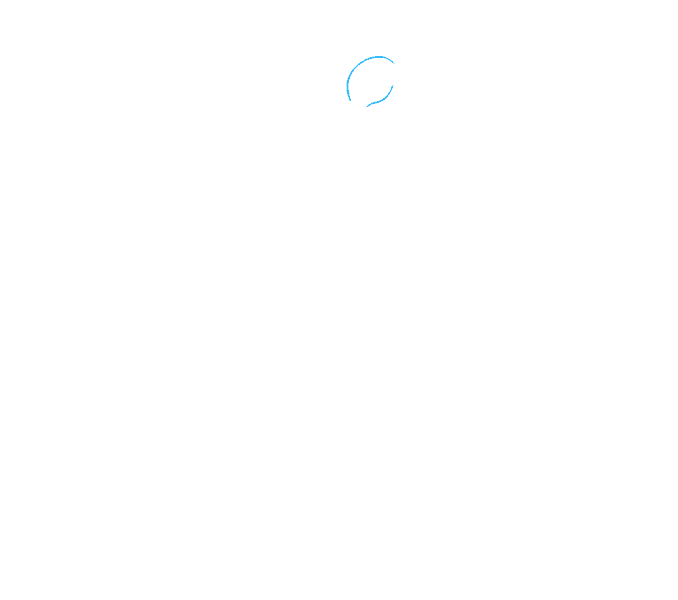 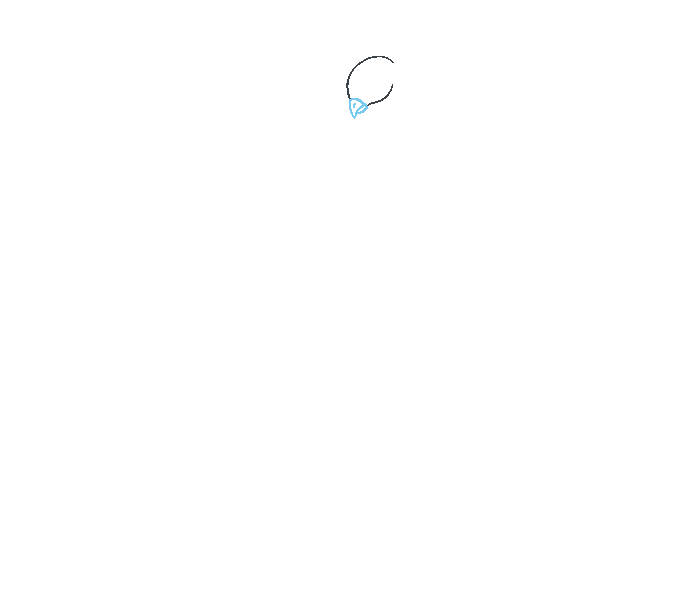 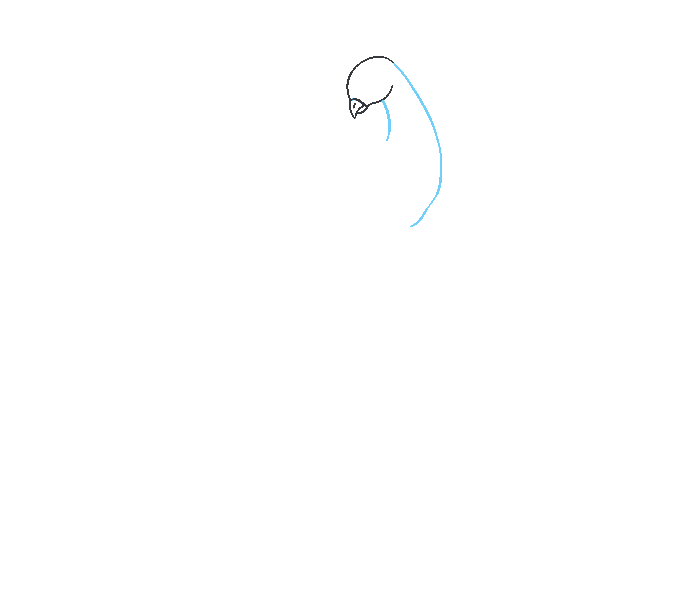 Extend one long and one short curved line from the head, outlining the gracefully curving neck. 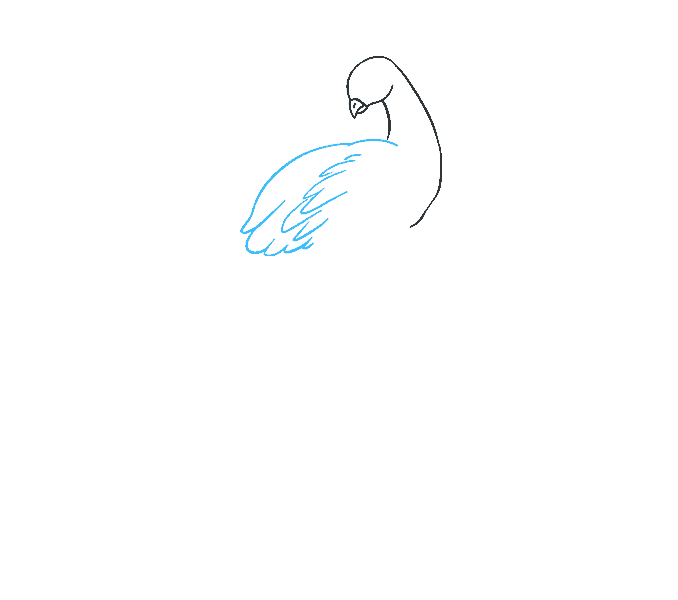 Draw a long, curved line from the neck. At the end of the line, draw feathers using connected, "U" shaped lines. Add more feathers to the bird's back using "U" shaped lines of various sizes. 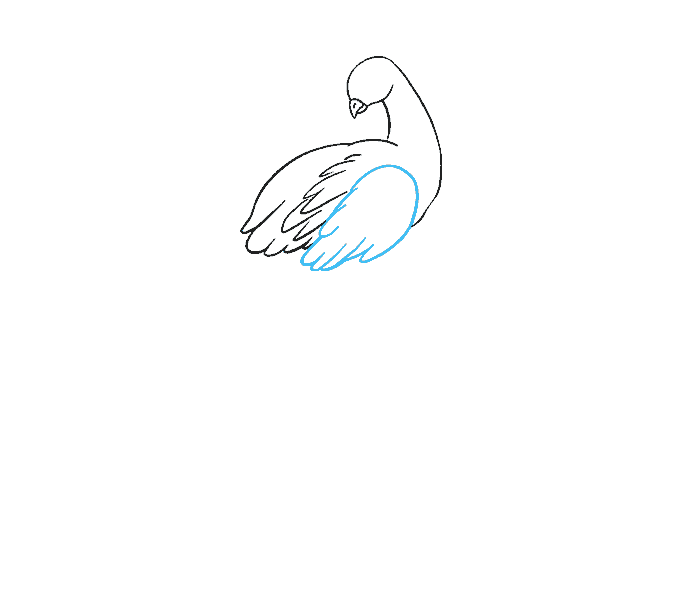 Draw a long, upside down "U" shaped line to outline the near the wing. Enclose the shape of the wing using connected "U" shaped lines to form feathers. 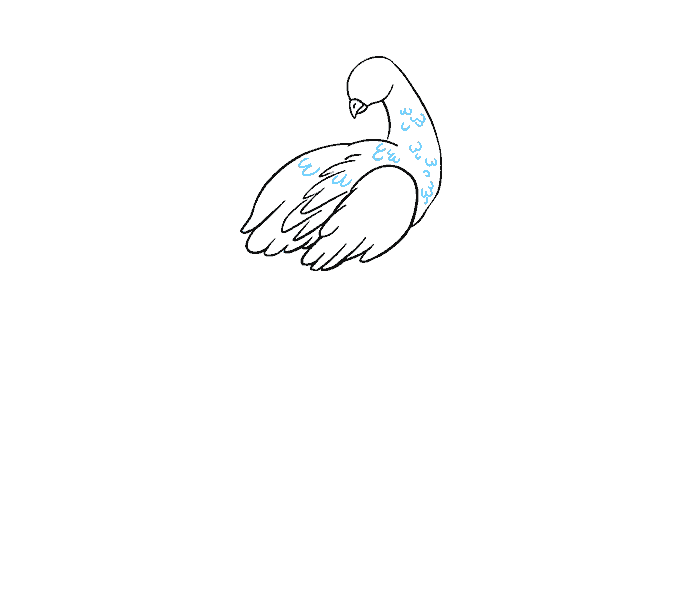 Add the detail of feathers throughout the bird's body and neck using small "U" shaped lines. Allow some of the lines to connect with others. 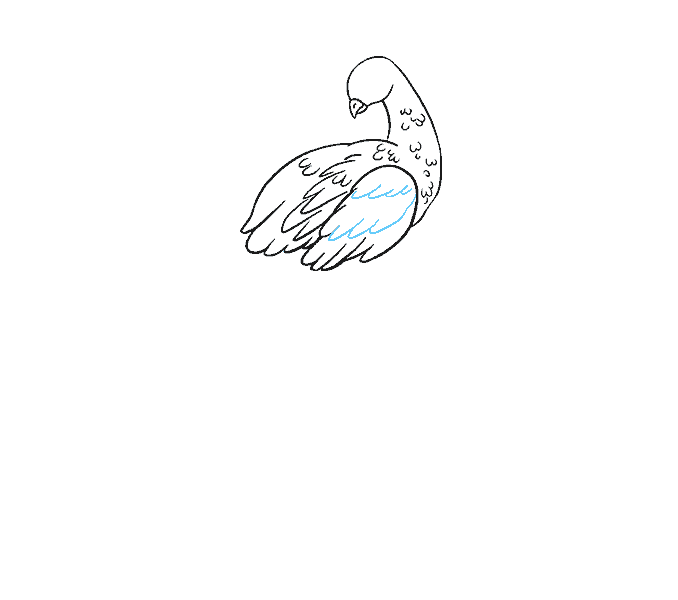 Draw additional feathers on the near wing using connected "U" shaped lines. 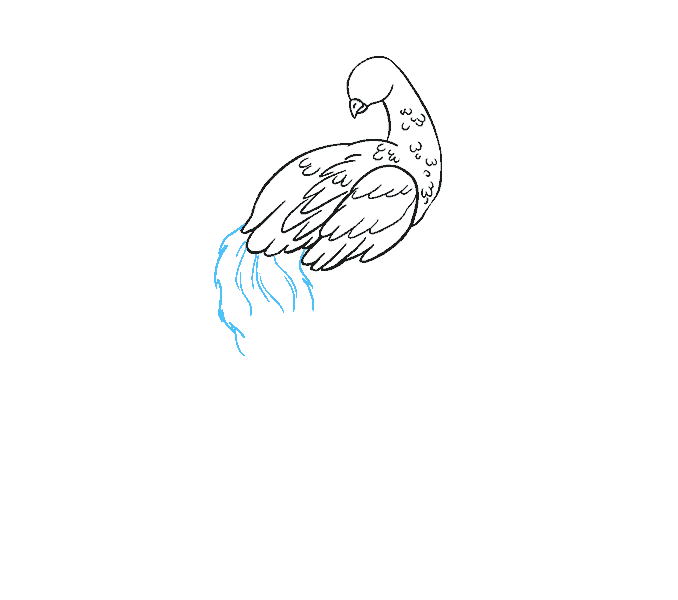 Begin to outline the peacock's long, flowing tail. Extend two sets of connected, curved lines of varying lengths, allowing the lines to meet in jagged points. Between these lines, extend curved lines of different lengths from the bird's body. 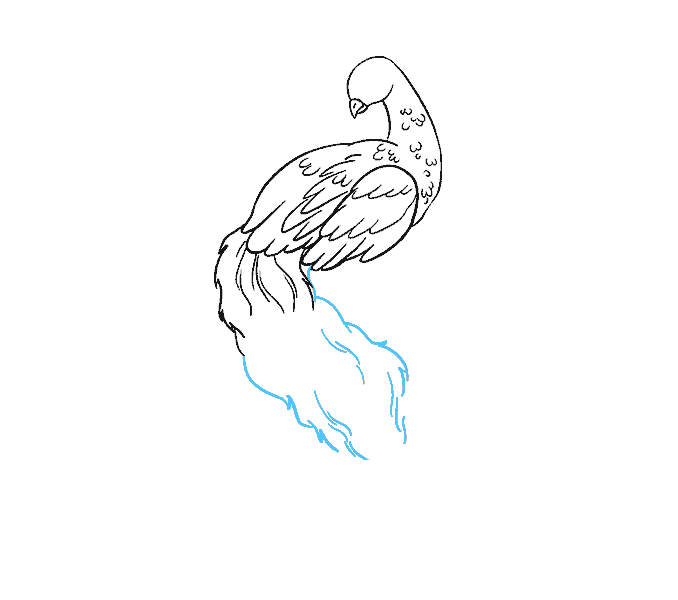 Continue the series of connected, curved lines on each side. Detail the interior of the tail with curved lines of various lengths. 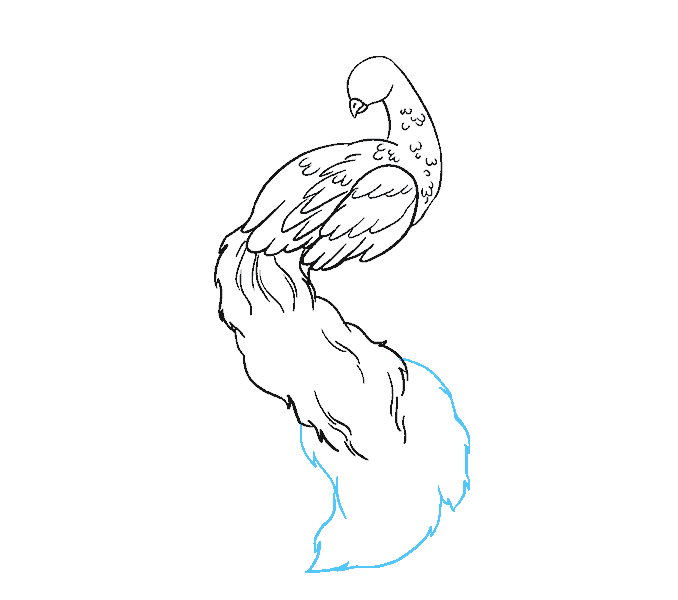 Continue the lines of the tail using connected, curved lines that meet at jagged points. Allow the lines to converge at a point, enclosing the tail. 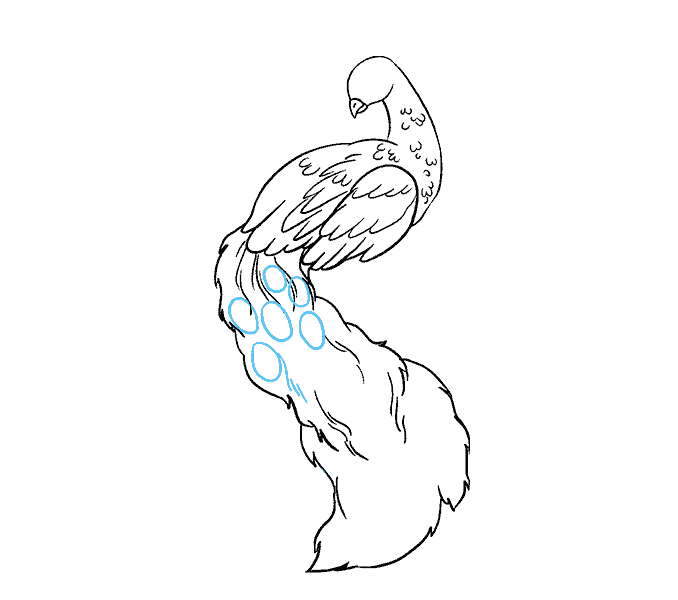 Draw several ovals near the base of the tail. These outline the peacock's eye-spots. Add a few more curved lines for texture. 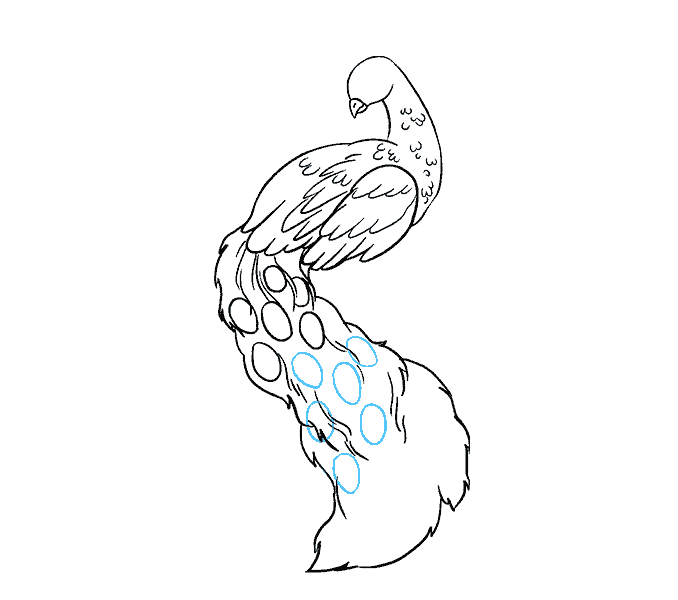 Continue drawing oval eye-spots in the center of the tail. 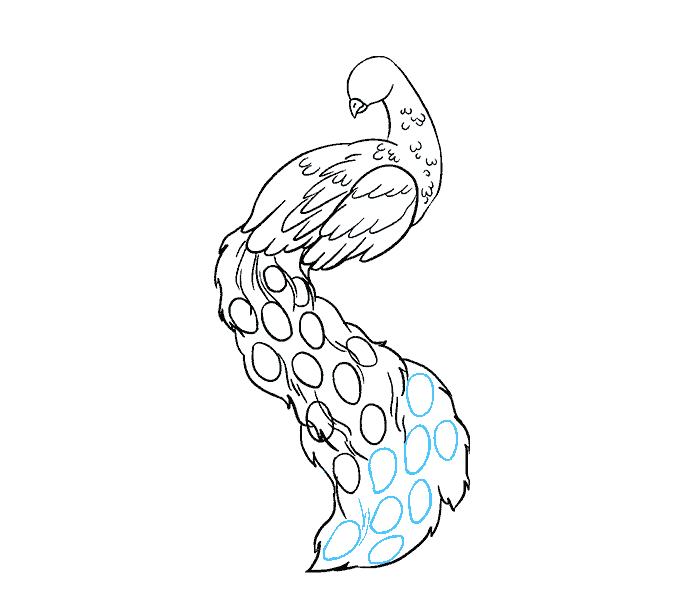 Add additional oval eye-spots until the entire tail is full of these spots. 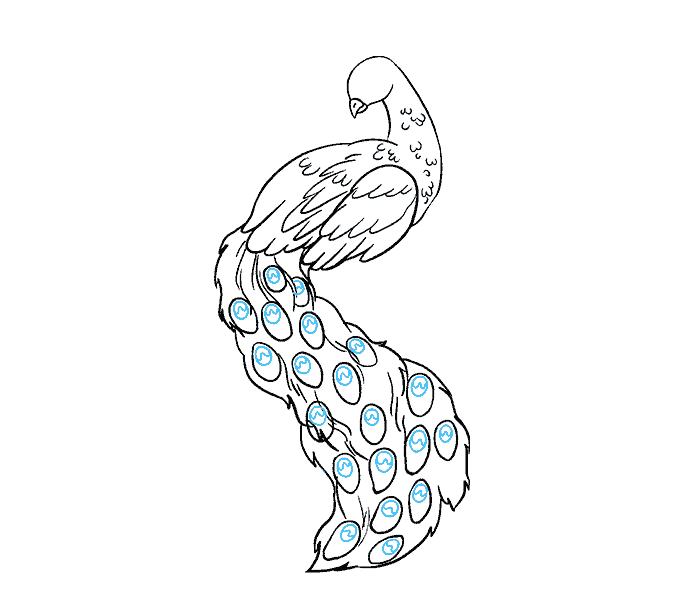 Within each eye-spot, draw a circle. Within each circle, draw a rounded "W" shaped line. 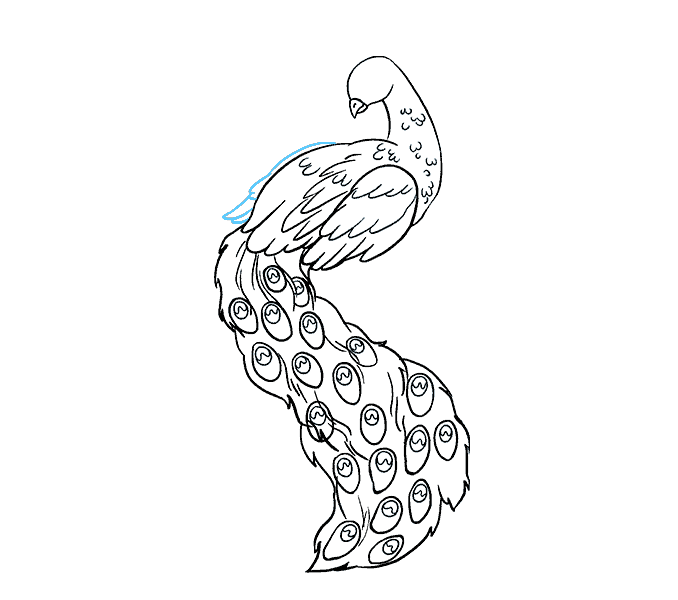 Draw the far wing using a curved line. Add some flight feathers to its tip using "U" shaped lines. 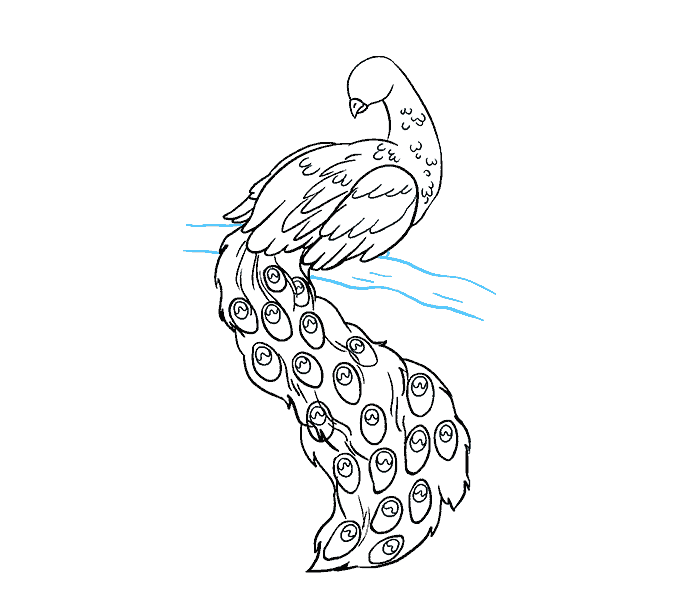 Give the peacock a perch to rest upon. Extend a set of parallel, curved lines on each side of the tail. These lines form a tree branch. Add a few curved lines along its length to give it the texture of wood. Draw a small curved line between the branch and the wing to indicate the bird's foot. 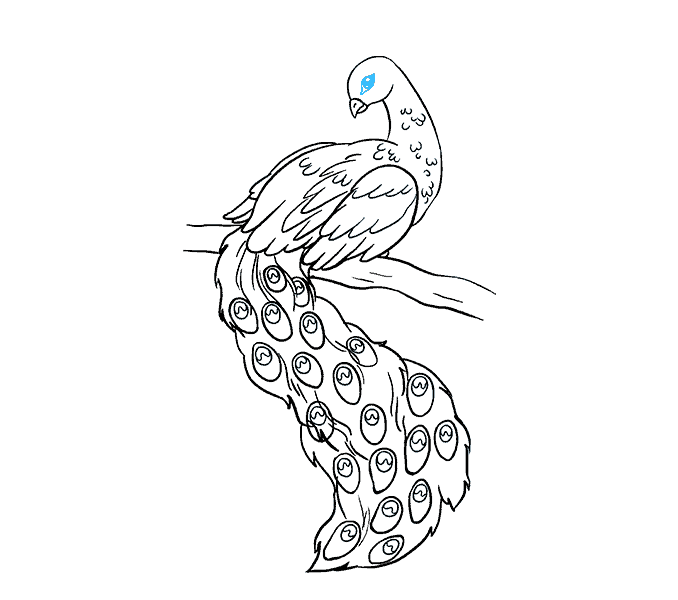 Draw the peacock's eye using two curved lines, allowing them to meet in a point on each end. Draw a curved line through the eye to enclose the pupil. Highlight the eye with two small circles. Shade between the line and the circles. 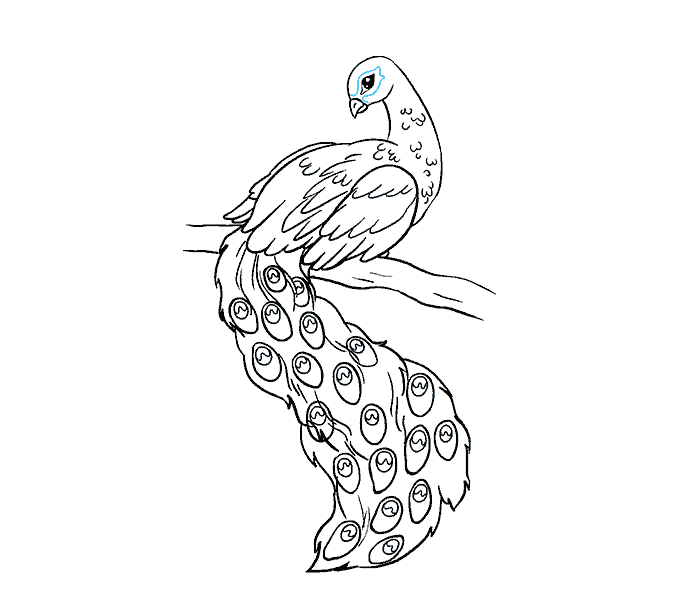 Outline the beak and the eye using a curved line. 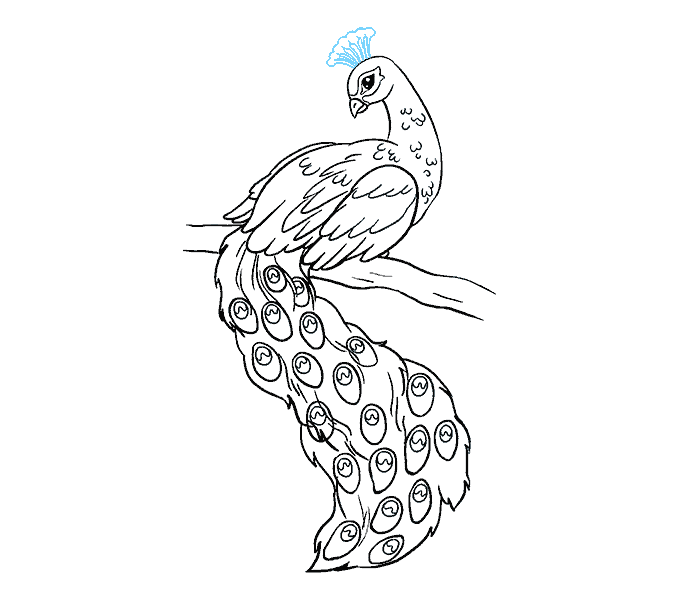 Draw the flourish of feathers on the peacock's head. Draw multiple sets of curved lines extending from the top of the head. Then, draw a circle on top of each set of lines. 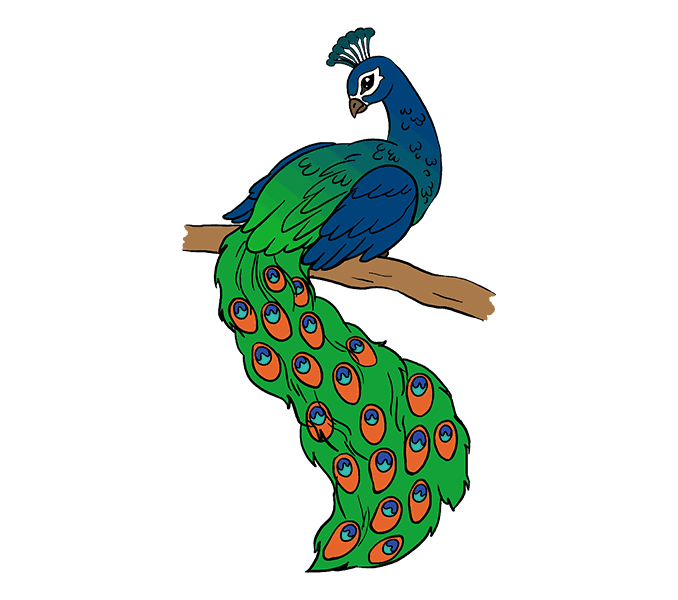