Rhinos are herbivores, meaning they eat plants. In fact, they eat a lot of plants - enough to maintain a bodyweight of three to five tons. Most are endangered, as they have been hunted for their horn - which is made from keratin, the same substance as our own hair and fingernails. Their combined population is less than 30,000. Only two female northern white rhinos - and no males of the species - are left in existence.

Did you know? If you have more than one rhinoceros, you can call the group rhinoceroses, rhinoceri, or rhinoceros. They communicate using sounds too low for the human ear to hear.

At least since the days of the Roman Colosseum, the rhino has been an object of popular culture in the West. Fictional characters include Officer McHorn of Disney's Zootopia and Kifaru of The Lion Guard.

Would you like to draw a cartoon rhino? This easy, step-by-step cartoon animal drawing tutorial is here to show you how. All you will need is a pencil, an eraser, and a sheet of paper.

If you liked this tutorial, see also the following drawing guides: Bull, Bear, and Lion.

Step-by-Step Instructions for Drawing a Rhino

1. Use a long, curved line to enclose an irregular oval shape. This will become the rhinoceros' head.

2. Erase a section of the oval. In its place, enclose two curved triangles, one larger than the other. These are the rhino's horns. Enclose the shape using a curved line, forming the rhino's uniquely shaped lip. Contour the base of the horn using short curved lines.

3. Erase another portion of the oval, opening the top of the head to connect to the body. Use a long, curved line to sketch the forehead and shoulder.

4. Allow a second long, curved line to overlap the first, meeting at the center of the back. Extend the line to outline the hips, rump, and rear leg. Double it back upon itself to outline the foot and remaining side of the leg. Enclose rounded shapes to indicate the toenails and use short curved lines to differentiate the toes. 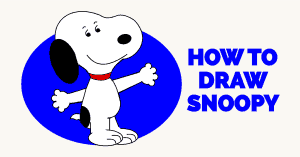 6. Draw the rhino's foreleg. Use long curved lines to outline the leg and foot. Detail the foot with round toenails and short, curved lines to differentiate the toes. Then, use curved lines to contour the knee and the folds of skin at the top of the leg.

7. Use curved lines to draw the neck and sketch the remaining foreleg. Enclose round toenails at the tip of the foot, and detail the toes using short lines.

8. Draw the rhino's ears. For each, extend a pair of curved lines, and allow them to meet at a gentle point. Use another curved line to enclose a teardrop shape within the ear. Finally, contour the base of the near ear using curved lines.

9. Detail the rhinoceros' face. Enclose round shapes to form the nostril and eye, shading the eye. Contour the rhino's skin using short lines around the nose, eye, and mouth.

Color your cartoon rhinoceros. Both the white and black rhinos are typically grey in color. Other species may be tan or brown.

It's a jungle out there! Bring home the whole zoo with our collection of cartoon animal drawing guides.

The Complete Rhino Drawing Tutorial in One Image